This article and the below video include graphic images some readers may find disturbing.

In June 2015, the animal rights organization Mercy for Animals sent two investigators to work as undercover employees at a slaughterhouse run by Foster Farms. They documented workers throwing live chickens against metal shackles, birds being scalded alive, and other treatment that the group argued amounted to animal cruelty. Mercy for Animals complained to the Federal Trade Commission that Foster Farms’ labeling of its products as certified by the American Humane Association, or AHA, deceived consumers. The agency declined to take action, though, noting that the company fired employees suspected of abuse, passed an audit, and installed its own video monitoring system.

New footage from Foster Farms, California’s largest poultry producer, shows the company continuing to engage in similar behavior that activists allege amounts to cruel treatment of live chickens. Foster Farms, which was recertified by the AHA earlier this year, has been on the receiving end of millions of dollars in state and local subsidies to expand its product lines in California.

The recent footage, obtained by an anonymous videographer and provided to The Intercept by animal rights group Direct Action Everywhere, or DxE, shows workers throwing live chickens on the concrete floor; discarded yet conscious birds under the weight of one another; some chickens missing electrical waterbaths designed to stun them before slaughter — all under the supervision of employees working dangerous and long shifts in the dark. The videographer, who requested anonymity to avoid repercussions for sharing the footage, entered the company’s facility in Livingston, California, to set up miniature infrared cameras and obtain hundreds of hours of footage, recorded over the past several weeks. Foster Farms did not respond to a request for comment.

DxE alleges that the documented footage amounts to a violation of California code outlawing animal cruelty, Foster Farms’ AHA certification, and the company’s own policy to raise chickens free from hunger, discomfort, pain, cages, and distress. The Humane Methods of Slaughter Act also requires that all livestock be stunned before slaughter; however, much to the frustration of activists, poultry is exempt from this law. Still, the federal government does require that chicken producers abide by industry best standards, which include rendering birds unconscious prior to slaughter.

The video also appears to contradict statements made by the AHA and Foster Farms representatives at the time of its most recent certification in February. “Farmers and associates like those who work with Foster Farms are part of the growing humane movement to elevate standards for animals living on farms and ranches,” Robin Ganzert, the AHA’s president, said at the time. “Today’s consumer insists on independent third-party verification of animal welfare practices,” added Ira Brill, Foster Farms’ vice president of communications. “American Humane’s ethical and scientific based standards and requirement that welfare practices be in place 24/7 365 days a year, provide this much needed assurance.”

DxE released the video to coincide with a protest at the facility Tuesday. According to a DxE press release, demonstrators locked themselves in place to prevent trucks from entering or leaving the site. “The public is shocked to see the brutality happening behind closed doors,” DxE organizer Christina Liu told The Intercept. “We’re taking action as a last resort.”

Liu and several other protesters were arrested Tuesday on charges of trespassing and resisting a public officer. Some are being held on $50,000 bonds, which attorney Bonnie Klapper, who is representing the activists, told The Intercept amount to a “bail enhancement” in which a judge grants officer requests for a larger bail than usual.

“These outrageous bail amounts are another example of law enforcement targeting peaceful activists rather than the exploitative corporations that are illegally torturing animals, as well as destroying our environment,” Klapper said in a press release today. 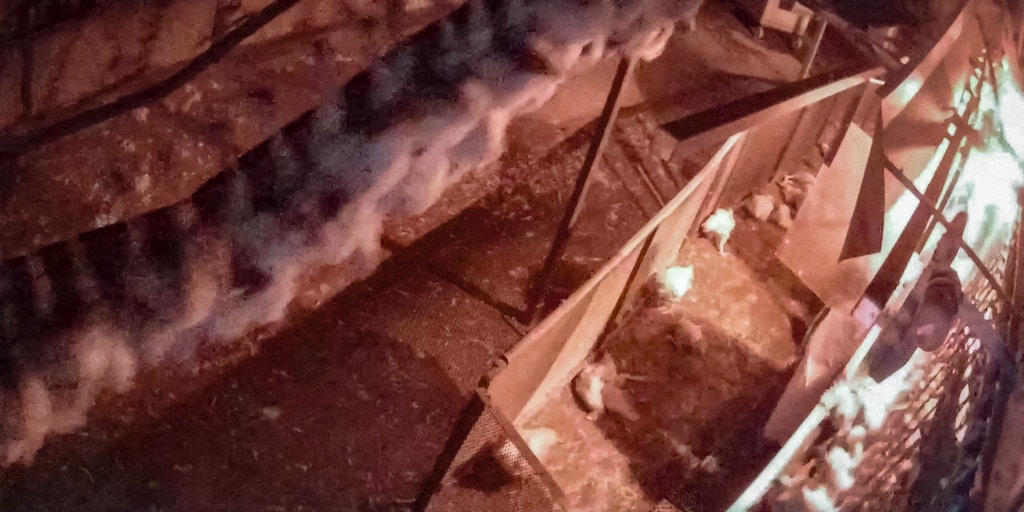 First, the DxE video shows a sorting station where workers hang live chickens arriving at the facility on metal shackles. According to a training manual shared with The Intercept, Foster Farms expects each worker to hang 23.3 birds per minute. The videographer told The Intercept six or seven employees are stationed at each line, meaning that the site’s operational tempo straddles the 140 maximum rate that the U.S. Department of Agriculture’s Food Safety and Inspection Service allows.

In the middle of the Covid-19 pandemic, the agency began granting waivers to allow even higher speeds, which activists complained would increase health risks to workers and animals. A Foster Farms facility in Kelso, Washington, obtained one of these waivers, though it’s unknown whether the Livingston site did as well. Regardless, the Livingston location experienced what opponents to the waiver feared: a mass coronavirus outbreak. Episodes like this prompted Sen. Cory Booker, D-N.J., to introduce a bill last summer prohibiting higher operation speeds. “The USDA should be in the business of prioritizing worker and consumer safety over the profits of large multinational meatpacking corporations, not the other way around,” Booker said at the time.

“The company has specifically created this situation where you’re literally killing hundreds of thousands of animals, you’re being treated like a machine.”

In the video, workers throw unviable chickens — those injured or already dead — on the floor, where they lie injured and piled on top of one another, potentially suffocating or drowning, according to the videographer. One employee is shown throwing a bird against the shackles, which also occurred in the Mercy for Animals video. Some live chickens jump off the table before being shackled and join the discarded ones. The video shows an employee returning those birds to the station for shackling but not inspecting them to ensure that they’re in fact the ones already deemed fit for consumption.

“The company has specifically created this situation where you’re literally killing hundreds of thousands of animals, you’re being treated like a machine,” the videographer said, arguing that those responsible for designing this system should be the ones to face accountability, whereas employees often bear that burden.

After shackling, a conveyor belt transports the birds to electrical waterbaths that are intended to turn them unconscious, leaving them less vulnerable to pain — a value Foster Farms professes to uphold. But chickens are shown lifting their heads above the water, avoiding being stunned. Some conscious birds also manage to avoid the blade intended to slice their necks, leaving workers to cut them with a handheld knife. Similar incidents were found in the 2015 investigation that prompted the complaint with the Federal Trade Commission.

“Animals are being eviscerated alive — right here, right now,” Liu said in DxE’s press release. “These practices are horrifying and illegal … but they’re also business-as-usual for the factory farming industry.”

The videographer also shared with The Intercept footage they recorded of a bin filled with maggots crawling all over “inedibles” left out in the open air. “The smell is indescribable,” the source said. DxE is planning to hold another major demonstration Wednesday, with the expectation of possible arrests, in order to demand government action against factory farming. Also known as concentrated animal feeding operations, these types of modern farming facilities are notorious for using as few resources as possible to maximize profit. In addition to risking harm to animals, workers, and consumers, these operations are major drivers of pollution and deforestation. The United Nations estimates that global livestock is responsible for more than 14 percent of greenhouse gas emissions.

DxE has already begun a broader campaign to call on California Gov. Gavin Newsom to establish a moratorium on the expansion of factory farming in the state and has received more than 52,000 signatures in support. The demand echoes legislation introduced by Booker to end large factory farms and crack down on monopolistic practices.

The United Nations estimates that global livestock is responsible for more than 14 percent of greenhouse gas emissions.

But the factory farming industry carries a layer of protection. Several states have passed laws to punish whistleblowers exposing conditions at factory farms, though an attempt to pass such legislation in California in 2013 failed to muster support in the state Legislature.

A search through California campaign finance records shows how embedded Foster Farms is in state politics. For example, Foster Farms received a major government grant developed in part by a local politician who has accepted campaign donations from the company. A February 2019 notice announcing that Foster Farms won a $6.5 million “economic incentive package” to expand and upgrade its Livingston facility credited California Assembly Member Adam Gray, whose district includes the site, with helping draw up the subsidy. Gray had raised $23,000 from the company in the years since his first campaign for the 2012 election, and Foster Farms donated another $4,000 after the subsidy was announced. The California Poultry Federation, an industry group of which Foster Farms is a member, gave Gray another $2,000 for the 2020 race.

The $4,000 was Foster Farms’ largest individual contribution in the 2020 California elections, but Gray certainly wasn’t alone. The company gave a total of $106,000 to various candidates running for the state Assembly and Senate. The California Poultry Federation, meanwhile, handed out more than $44,000. Separately, Foster Farms gave Newsom $12,500 in his 2018 race for governor. The industry group gave another $10,000.

At the federal level, a political action committee representing the California Poultry Federation gave its largest contribution — $4,500 — in the 2020 congressional elections to Rep. Jim Costa, D-Calif., who represents the county where Foster Farms’ Livingston site is based. Earlier this year, Costa called on congressional leaders crafting new tax policy to protect family-owned farms like Foster Farms. He joined Rep. Cindy Axne, D-Iowa, in leading a group of 13 House Democrats urging an exemption from changes to the stepped-up basis for capital gains. House Ways and Means Committee Chair Richard Neal, D-Mass., announced earlier this month that the tax increase didn’t have enough support, protecting the loophole.

This content originally appeared on The Intercept and was authored by Sara Sirota.