Janine Jackson interviewed Jim Naureckas about Covid and corporate media  for the September 24, 2021, episode of CounterSpin. This is a lightly edited transcript. 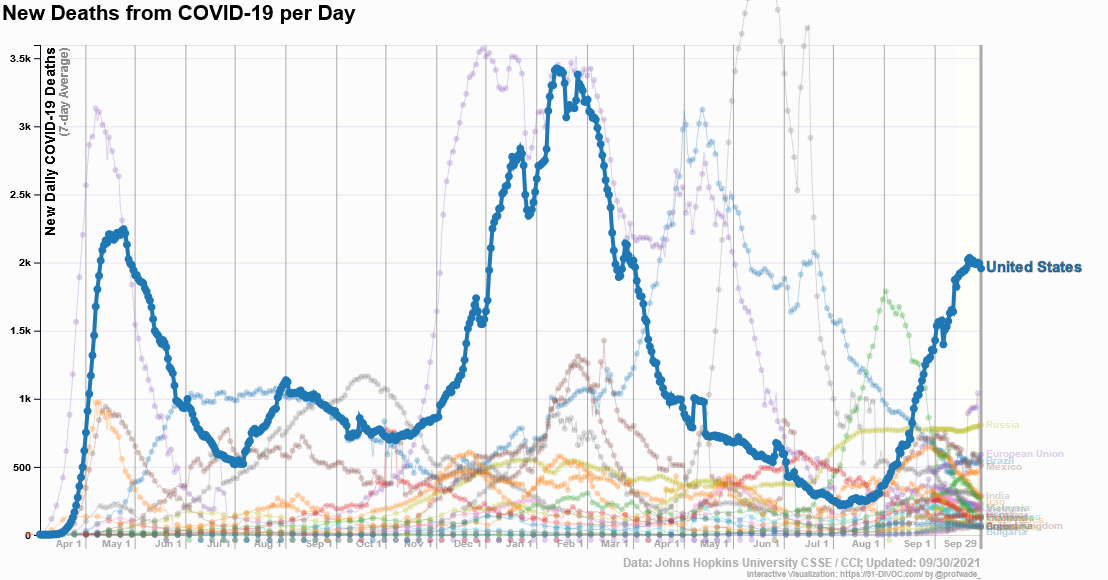 Janine Jackson: As we record on September 23, Johns Hopkins reports an average of 2,031 people are dying from Covid every day in this country, the highest rate seen since March. Covid-19 has officially surpassed the US death toll from the 1918 influenza pandemic. And in some states, the spread of the highly infectious Delta variant is still on the rise.

Covid’s toll is not numbers, of course, but human lives. And not just the dead, but the sick and harmed and the loved ones left behind. It’s the human beings that seem lost in the corollary disaster that is media misinformation. When books are written, the lies and distortions and huckstering around Covid will play a key role.

Joining us now for an update on Covid in the media is Jim Naureckas, FAIR’s editor. Welcome back to CounterSpin, Jim Naureckas.

Jim Naureckas: Thanks for having me on.

JJ: So what’s on your mind right now?

JN: I want to start off by saying that people should get vaccinated, that it’s vitally important, that this pandemic is going to go on until we get enough of the population vaccinated to stop people from at least dying from the disease, if not stopping the spread of the disease entirely. 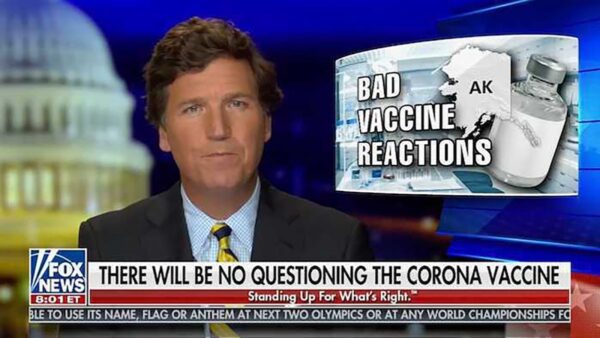 So I say this as a preface, because I want to say that people’s mistrust of the media is a big problem. It’s the main problem, really. We could have vaccinated the entire country by now. And we haven’t. We’ve only vaccinated 55% of the country, largely because people are either distrusting what they’re hearing from establishment media, or they’re believing what they’re hearing from right-wing media that, I am convinced, are knowingly encouraging people not to get vaccinated, because they believe it will be politically beneficial for them if the pandemic goes on under the Biden administration.

And, certainly, the Republican Party is in a much better position right now than it would be if everyone had gotten vaccinated and the pandemic had ebbed away in this country.  And it is a particular problem for the elderly, who tend to be more conservative, and to be more likely to be listening to Fox News, and hearing the distortions of the vaccine program and what the dangers are.

But people are hearing the establishment media—I’m thinking of the New York Times, Washington Post, ABC, NBC, CBS—who are giving out the message that you should get vaccinated, and they’re not believing it. And that is because we have in this country a media system, an information delivery system, that is not trustworthy. People don’t trust them because they have no reason to trust them. 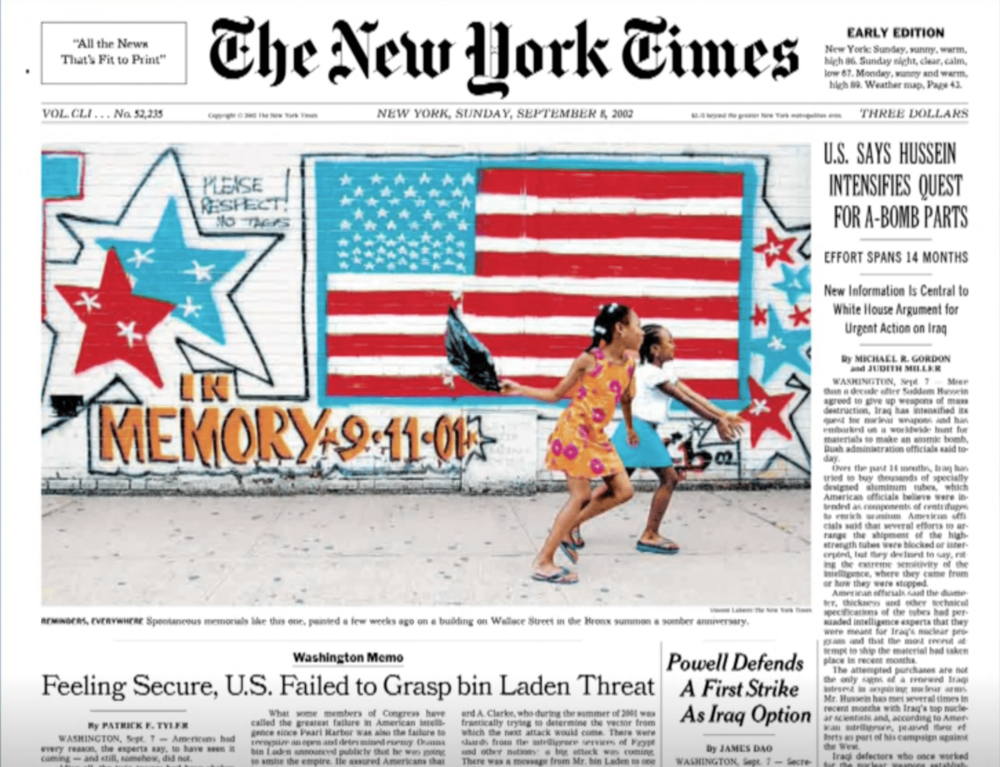 When you look at the crises that have faced the country in recent years—and that’s really why you need a news media, is for the danger moments—after September 11, the establishment media got us into a devastating war, a series of wars in the Middle East and beyond, based on false evidence, distortions of what was actually happening.

The economic crisis of 2007-2008 was not foreseen by the media, even though it was patently obvious that the housing bubble was out of control and was posing a huge risk to the US economy. You saw a lot of denial of this in establishment media.

And then, after the bubble popped, the media were pushing the idea that the worry was that the government would spend too much money to get the economy going again. We had years of unemployment because people listened to establishment media saying, don’t react too aggressively to this economic disaster.

Climate change is another issue where the dangers have been clear for decades. And media have failed to present what actually needs to be done to stop catastrophic changes in our environment that we all depend on.

Particularly, of distrust in the African-American community and people of color, you have media that assume the police are telling the truth about a police shooting unless there is video of police actually murdering somebody. And so, do you think, “this is a media that’s on my side, that is looking out for my health”? No, you don’t. You are concerned.

Again, this is why I brought up at the beginning of this interview that I do think it is vital for people to get vaccinated. I’m not saying you should distrust the media, therefore don’t get the vaccine.

JN: I think you should get the vaccine despite the fact that the media are telling you that you should do it.

JJ: Absolutely. People have no reason to trust corporate media. Many people, and we’re media critics, we know that. But that’s why we think it’s so important to read widely and read independently so you can discern, you can read through mainstream media, which is what we encourage.

I was thinking of, also, you have establishment media, which in this case are putting forward scientifically-based information about Covid and about vaccination, and right-wing media that are doing something very different. But then you also have corporate media doing this chin-stroking thing where they talk about the “culture” of anti-vaxxers.

Even though, as a whole, establishment media are putting forward correct, if you will, messaging, they also play so deeply into the idea that it’s not a public health issue, that it’s somehow a political or a cultural issue, or even a thing about foreign policy. So many other values pollute that medical information. 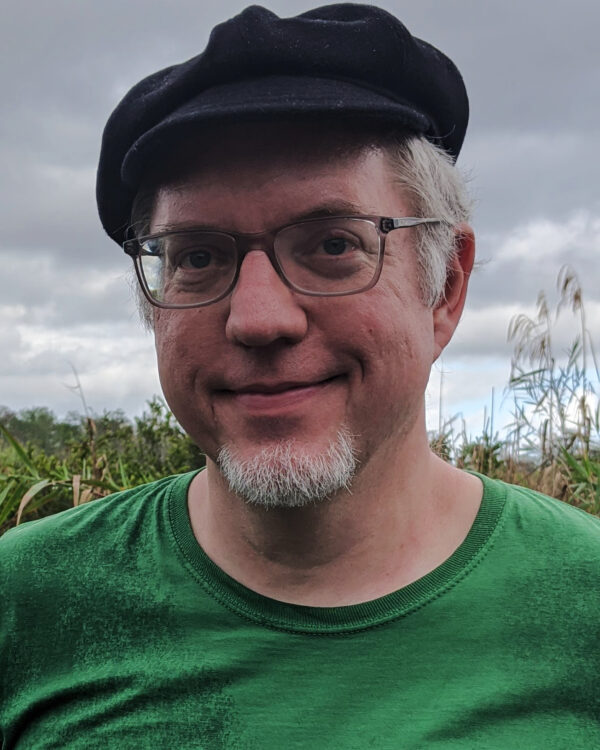 JN: Yeah, there are many, many flaws in the way that establishment media have covered Covid. As you say, these interviews where you go and talk to people who haven’t gotten vaccinated, and they give you the misinformation that these people have heard, and are repeating, the reasons why they think that it’s safer for them not to get vaccinated than to get vaccinated. And the reporter will just let it lie there without correcting it.

If you had coverage that was looking at lack of vaccination on a community level, and what high rates of unvaccinated people do to their communities, I think that this would be much more effective than asking people what misinformation that they’ve heard. And especially if you don’t go on to correct that misinformation.

People are making fun of Ross Douthat, because he wrote this column about “what if Covid had killed one in 50 people, rather than one in 500 people?” And I think that it was  kind of a goofy column; but the point is that Covid deaths are still rare enough that you are not likely to be able to tell how bad it is by looking around your immediate circle—you need the media to tell you what is happening in your community. This is why we have news media, is that they are supposed to gather up information about what’s going on in our society and inform the society about it.

And I have seen a real lack, throughout the pandemic, of media really trying to convey—in the same way that you convey, like, whether people should take an umbrella to work, because it might rain that day—the information about how the virus is being transmitted. What are the risks to you, what are the risks to your community, I do not think is being communicated in a way that really allows people to make informed choices about what they’re doing to stop this devastating disease.

JJ: Another thing, Jim, is the international angle that’s been kind of mysterious. Even if you, if you think, well, let’s look at the numbers and see what they say, some of the comparisons media seem to be making don’t make a lot of sense in terms of—China, for example.

Mint Press (7/27/21): “Corporate Media Joins the Anti-Vaxxers When It Comes to Chinese- and Russian-Made Vaccines”

JN: It is infuriating when you look at how the global pandemic is being covered, that media that would hate to be compared to One America News Network doing anti-vax propaganda are doing that same kind of propaganda when it comes to other countries. To talk about how China has a problem because they are trying to prevent the spread of Covid in their country, they have a zero Covid policy. [Media] talk about the cost to the country of having this policy of not letting people die from Covid.

Now, first of all, their economy is doing better than the United States had had with its much more lax approach to the pandemic. But there’s this idea that in China, people are having “pandemic fatigue”—unlike in the United States, is the implication. Like, there they’re worried about Covid, whereas here we’re all relaxed? And are feeling no pain because we’re not letting it bother us?

JJ: …affect our major policy. And we’re not trying to zero it out. We’re just accepting that you can’t do that, you know? And then also there’s the feeling of, well, yes, they’ve done better at containing it, but that’s because they’re so authoritarian. And so dying from Covid is the price of our freedom, I guess is the line.

JN: You go into a pandemic with the media that you have, and not the media that you wish you had. But I feel like there is a vast amount of human suffering that could have been prevented, and could still be prevented, if media took the approach of, “We are going to figure out what is actually happening with this virus and talk about what are the steps that are needed to stop it”—instead of treating it as a culture war, a political football, a source of clickbait. I feel like the corporate media have so much to answer for in this disaster, and I don’t think that they will ever really stop to think about the cost of the way they have approached this disease.

JJ: We’ve been speaking with FAIR’s editor, Jim Naureckas. Jim Naureckas, thanks for joining us this week on CounterSpin.

JN: Thanks for having me on.

The post ‘You Should Get the Vaccine Despite the Media Telling You You Should’ appeared first on FAIR.