The missing person case of 22-year-old Gabrielle (Gabby) Petito blew up headlines and social media in the weeks after her disappearance on a cross-country van trip with her boyfriend. In the wake of the Petito case, conversations about missing people of color have finally entered the national spotlight. But fights for publicity for these missing people began way before Petito’s tragic story broke.

The power of publicity 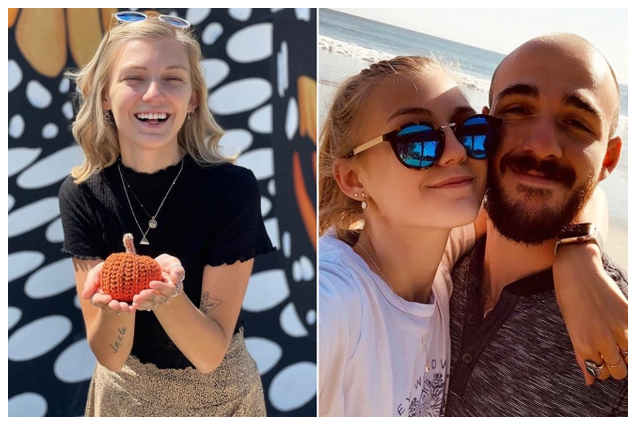 Petito was a vlogger with a modest Instagram following who was crossing the country by van with her boyfriend Brian Laundrie. Petito’s remains were found on September 19 in Wyoming’s Grand Teton National Park, and the coroner ruled her death a homicide. Meanwhile, authorities are unable to locate Laundrie, who returned alone to his parents’ Florida home in early September. Police in Moab, Utah, intervened in a potential domestic violence incident between Laundrie and Petito in mid-August.

After Petito disappeared, her case went viral on social media, and many followers scoured her Instagram posts for clues. Even though social media have the potential to breed bogus claims and misleading theories that can hinder investigations, the hype may have also helped spur authorities to action and lead them toward discovering Petito’s remains (New York Times, 9/20/21), although the FBI has not confirmed what tipped them off. Now the FBI is asking the public to help them locate Laundrie.

The attention has bolstered her family’s fight for answers—and audiences’ demand for national media coverage. But there are more than 20,000 missing persons with open cases in the US, and few of their stories trend on Twitter or come to dominate 24-hour news cycles. 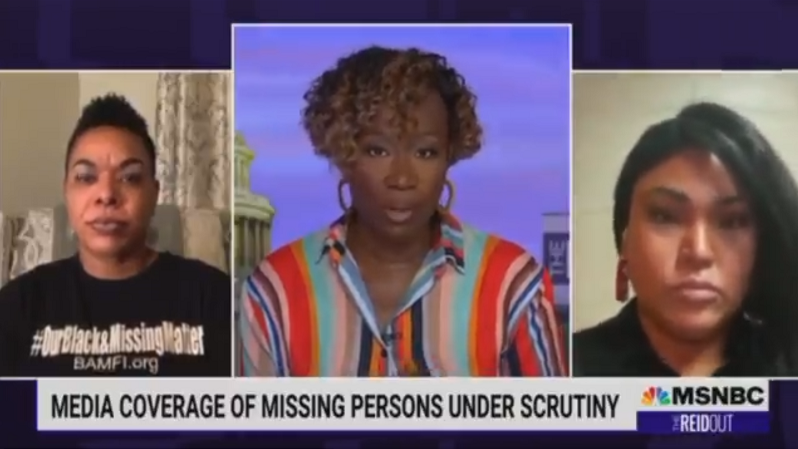 In the midst of the wave of Petito coverage, MSNBC’s Joy Reid (Reidout, 9/20/21) pointed to the phenomenon she referred to as “Missing White Woman Syndrome”: the way corporate media focus attention on a single missing individual, usually a young white woman, while most people of color confront silence and apathy when they face the same tragedy. It’s a term that comes from journalist Gwen Ifill, who used the phrase at the 2004 Unity: Journalists of Color conference in relation to the cases of Natalee Holloway and Laci Peterson, which dominated news cycles in the early 2000s while cases of missing people of color went unreported.

Reid brought on Derrica Wilson, co-founder and CEO of the Black and Missing Foundation, and Lynnette Grey Bull, founder of Not Our Native Daughters, an organization that spreads awareness about cases of missing and murdered Indigenous women.

“Now, it goes without saying that no family should ever have to endure that kind of pain,” Reid said:

And the Petito family certainly deserve answers and justice. But the way this story has captivated the nation has many wondering, why not the same media attention when people of color go missing?

Fox News (9/21/21) accused MSNBC‘s Joy Reid of “dismissing the focus on the [Petito] case”—even while quoting her as saying, “The Petito family certainly deserves answers and justice.”

“MSNBC‘s Joy Reid Dismisses Focus on Gabby Petito Case as ‘Missing White Woman Syndrome,'” a Fox News headline (9/21/21) read. The London Independent (9/21/21) also characterized Reid’s statements as “dismissal.” Below their incendiary headlines, both articles simply summarized Reid’s segment, not offering any rebuttal to her point, nor any explanation of how broadening the conversation to include missing people of color is dismissive.

Delighting in Reid’s ratings going down in the past quarter, Fox (9/22/21) published another piece claiming that her “problematic rhetoric,” including her “dismissal” of the Petito case, was alienating viewers. (Fox knows a thing or two about “problematic rhetoric,” as the outlet whose lawyers won a slander case against host Tucker Carlson by claiming that any reasonable viewer would assume the Fox News star was not “stating actual facts” but instead engaging in “non-literal commentary”—Slate, 9/25/20.)

In a Washington Examiner opinion piece (9/21/21), commentator Tiana Lowe called Reid “the dumbest person on cable news” and accused her of pulling the “race card.”

Lowe argued that the Petito story wasn’t about race at all, but about law enforcement failure: that police dropped the ball on Petito’s case, given that social media users’ sleuthing suggested the approximate location of Petito’s remains (New York Times, 9/20/21), and that the Moab officers let her and Laundrie go after she was clearly exhibiting distress.

Lowe’s points about police apathy are valid, but wait until she hears about the patterns of widespread apathy for missing people of color: 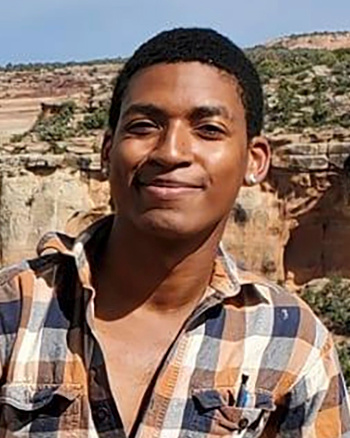 The Black and Missing Foundation reports that police and media treat missing Black people’s cases with less urgency, because they are more often assumed to be runaways and criminals who regularly face crime and tragedy in their communities. Black missing children often do not receive AMBER Alerts, because they’re classified as runaways. The foundation also reports, based on the 2020 NCIC Missing Person and Unidentified Person Statistics, that Black people make up nearly 40% of all missing persons cases, despite only making up 13% of the US population.

William & Mary Law School in Virginia found in a 2019 study that 35% of missing children’s cases involve Black children, but these only make up 7% of news coverage.

Meanwhile, the phenomenon of missing and murdered Indigenous women, girls and Two-Spirit (gender nonconforming) people is so pervasive that it has its own acronym, MMIW. According to  the Missing and Murdered Indigenous People Taskforce in Wyoming, the state where Petito’s remains were found, there have been 710 Indigenous people—mostly women—missing between 2011 and September 2020.

As of 2016, the National Crime Information Center reported 5,712 cases of missing Native American and Alaska Native women, but the US Department of Justice only had 116 in its database, according to Native Women’s Wilderness. The group also indicates that most murders of Native people are perpetrated by non-Natives on Native land (Atlantic, 2/22/13).

Lowe, Fox and the Independent may think they’re honoring the wishes of Petito’s mourning family by arguing her story should dominate headlines alone, but the Petitos are also using their platform to urge the press and social media users to bolster other missing persons cases. At a recent press conference, the family announced they’d be creating a foundation in their daughter’s honor to help other families locate their missing loved ones. After thanking the news media for their coverage and acknowledging the powerful influence of social media, Petito’s father Joseph Petito said that the same heightened awareness his daughter received should apply to every missing person. Pointing to the audience of journalists, he said:

It’s on all of you to do that. And if you don’t do that for other people that are missing, that’s a shame, because it’s not just Gabby that deserves that. And look to yourselves on why that’s not being done.

‘Making it about race’ 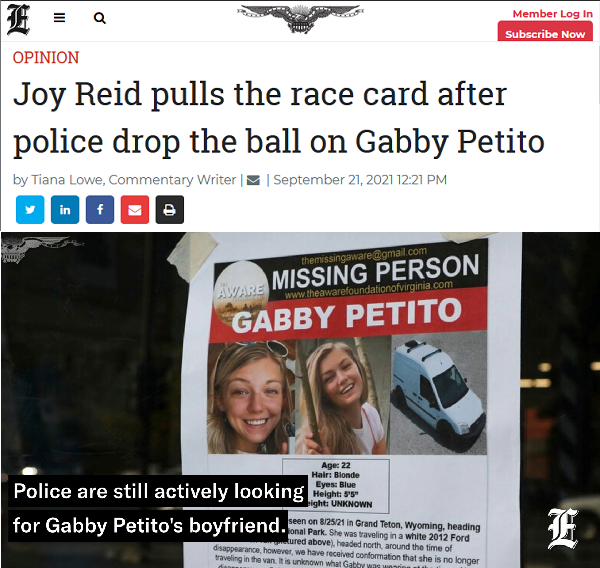 Examiner ‘s Tiana Lowe (9/21/21): “The dumbest person on cable news decided to make it about race. Because, of course.”

In her opinion piece flaming Reid, the Examiner‘s Lowe said that the Petito tragedy should raise awareness about law enforcement’s mishandling of domestic violence and the #MeToo allegations many women have against their partners, but that Reid chose instead to “make it about race.” This argument indicates that Lowe only sees gender issues as relating to white women, as if women of color don’t experience violence and go missing at the hands of their domestic partners. Lowe is OK with expanding the conversation, but not to people of color.

Outlets condemning Reid’s comments are simply proving her point. All Reid had to do was suggest that  we should care about missing people of color as much as we care about Petito in order to be demonized and accused of not caring about Petito or her family’s grief.

And Lowe is not the only media figure who’d rather missing people of color go unmentioned during reports about Petito. Bay Area Fox affiliate KTVU suspended news anchor Frank Somerville after he asked to include a line about the lack of media attention missing people of color receive (Mercury News, 9/24/21). News director Amber Eikel and other station officials reportedly denied the request, saying the mention was “inappropriate.” Somerville pushed back and was later notified of his suspension. Somerville is a white adoptive father of a Black teenage daughter.

Another victim as news peg 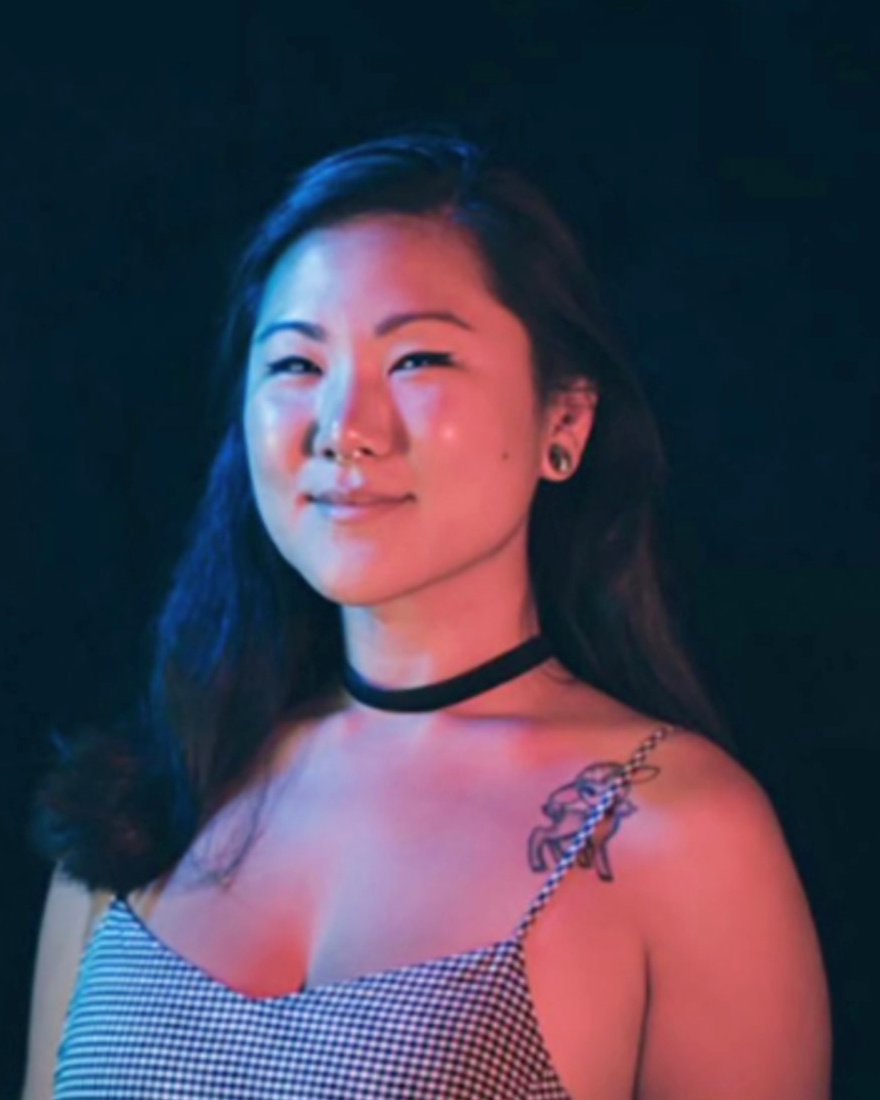 A search of the Nexis news database (which notably does not include the Washington Post) clearly reveals Petito as the impetus for getting Day, Cho and Robinson more widely covered.

Even with families like Robinson’s and Day’s begging for attention, the corporate press has only just begun printing their names—and mostly next to Petito’s.

Why is it that these stories didn’t stand on their own?

What’s considered “newsworthy” ultimately boils down to editors’ judgment. Despite small improvements in newsroom diversity, a 2018 Columbia Journalism Review study found that only 17% of US newsroom staff is not white, even though non-white people make up 37% of the population.

Additionally, while media pressure can influence police, what law enforcement prioritizes influences the news. As FAIR (6/24/21, 10/10/18, 12/22/15) has critiqued several times in the past, newsrooms have a tendency to take police’s word at face-value and publish police blotters as local crime news—so when law enforcement neglects missing people who don’t fit a certain profile, media will tend to as well.

A person’s proximity to whiteness, wealth or conventional attractiveness should not determine how worthy they are deemed of attention and justice.

The post Missing and Murdered People of Color an Afterthought to Gabby Petito’s Case appeared first on FAIR.