As US troops finally made their exit from Afghanistan after 20 years of occupation, the Sunday shows—which have always aimed to set Washington agendas—were filled with guests who had direct ties to the military/industrial complex.

FAIR analyzed three weeks of ABC‘s This Week, CBS‘s Face the Nation, CNN‘s State of the Union, Fox News Sunday and NBC‘s Meet the Press during the Afghanistan withdrawal (8/15/21, 8/22/21, 8/29/21). We recorded 36 featured guest appearances and 33 roundtable participant appearances. Those who appeared on more than one show were counted every time they appeared; there were 24 unique featured guests and 32 unique panelists.

Of the 24 unique featured guests, only two were not from the US: Roya Rahmani, the former ambassador to the US from Afghanistan, and Yasmeen Hassan, the Pakistani director of the NGO Equality Now. The two were interviewed jointly in one CNN segment (8/29/21)—the only segment in the study to center on the situation of Afghan women. 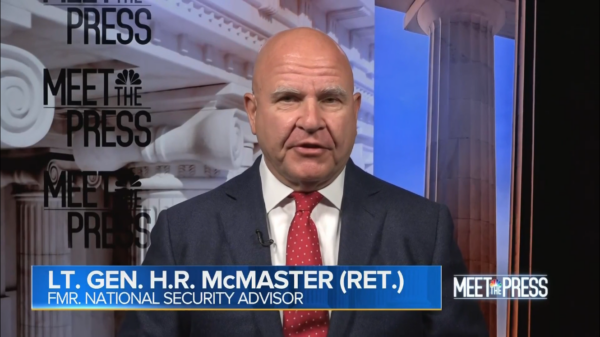 Lt. Gen. H.R. McMaster (Meet the Press, 8/29/21): “We surrendered to a jihadist organization and assumed that there would be no consequences for that.”

The two exceptions were National Security Advisor Jake Sullivan, who appeared five times, and career diplomat and former ambassador to Afghanistan Ryan Crocker (CBS, 8/22/21). Even these exceptions didn’t stray far from the MIC orbit: Crocker was cozy enough to the military to be named an honorary Marine in 2012, and Sullivan was a senior fellow at the Carnegie Endowment for International Peace, a somewhat misleadingly named think tank that regularly takes five- and six-figure donations from various tentacles of the military/industrial complex.

No elected officials without military/industrial complex ties were invited on to discuss the situation in Afghanistan in the three weeks studied. Nor were any scholars, activists or civil society leaders aside from Hassan. 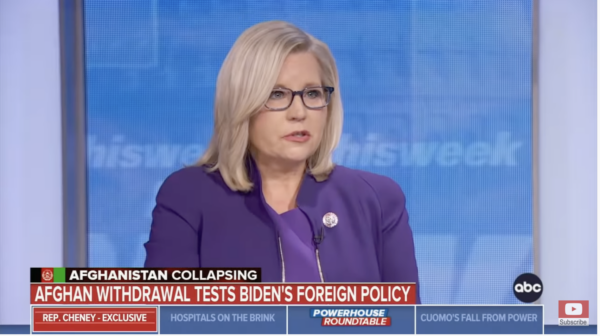 Rep. Liz Cheney (This Week, 8/15/21): “Everybody who has been saying, ‘America needs to withdraw, America needs to retreat,’ we are getting a devastating, catastrophic, real-time lesson in what that means.” Cheney took $104,500 from military industry PACs in the 2020 election cycle.

The arguments expressed in these Afghanistan segments skewed against withdrawal, despite the fact that a majority of the public has consistently supported withdrawal. In a Quinnipiac poll (9/10–13/21), respondents supported Biden’s decision to withdraw, 54% to 41%; Monmouth (9/9–13/21) found 63% in support of withdrawal “regardless of how it was handled” versus only 27% opposed. When offered the option of approving of withdrawal while disapproving of Biden’s handling of it, an ABC/Washington Post poll (8/29/21–9/1/21) found a total of 78% in favor of withdrawal.

The format of the Sunday shows for the three weeks studied typically featured a Biden administration guest questioned about Afghanistan as the headliner, followed by a Republican guest offering a counterpoint. Featured guests on other topics (often the Covid pandemic) sometimes followed, wrapped up with a roundtable of three or four panelists analyzing the week’s news. (CBS and CNN did not have roundtables.)

Hosts tended to ask questions of the administration guests that predominantly—sometimes exclusively—concerned the process of withdrawal, rather than the wisdom of it. For instance, in four of Secretary of State Antony Blinken’s seven appearances, and three of National Security Adviser Sullivan’s five appearances, they were only asked process questions, and made no statements in support of the decision to withdraw. 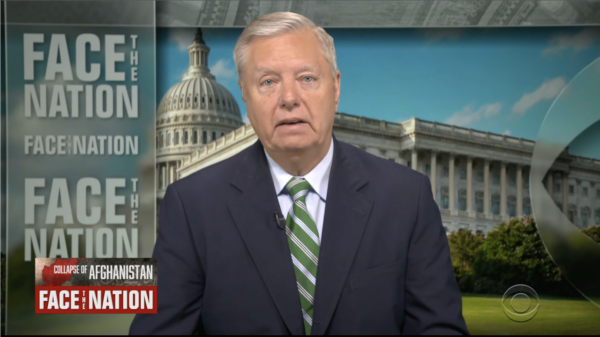 Sen. Lindsey Graham: (Face the Nation, 8/29/21): “You cannot break ISIS’s will through drone attacks. You’ve got to have people on the ground hitting these people day in and day out.” Graham took $256,700 from military industry PACs in the 2020 election cycle.

But the Republicans brought on to offer “balance”—such as Sen. Lindsey Graham, Sen. Ben Sasse and Rep. Liz Cheney—were frequently introduced as opponents of withdrawal, not just critics of the process, and given ample opportunity to discuss that opposition.

As a result, the shows tilted toward anti-withdrawal voices. Of the 16 appearances by featured guests with Democratic affiliations, only eight voiced support for withdrawal; of the 17 appearances by Republicans, 11 expressed opposition to withdrawal itself, not just how it was handled. (One opposition voice, Crocker, served under both Republican and Democratic administrations, and was therefore counted in both groups.)

Three other pro-Trump Republicans—Nikki Haley, Mike Pompeo and Rep. Steve Scalise—expressed support for the general idea of withdrawal, but opposition to Biden’s withdrawal. Haley argued: “President Trump very much wanted to see soldiers come out of Afghanistan. So it’s not about soldiers coming out.” But she also argued that Biden should have kept troops in under the circumstances: “This was a complete and total surrender and an embarrassing failure…. The Biden administration needs to go back and extend that August 31 deadline.” 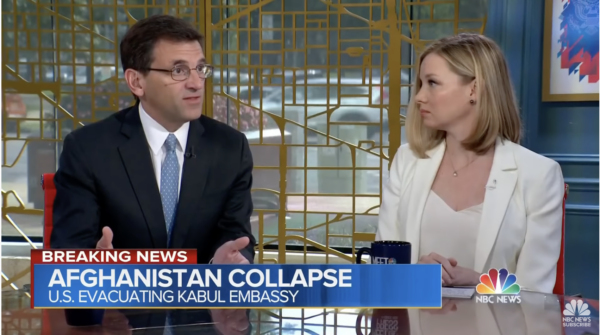 In one day, we’ll have six times as many people die of Covid in America as we’ve had combat casualties in five years. So we were not actually sustaining a big war effort. Very few troops there in the scheme of things. Much less than we have in South Korea, much less than we have in Germany, for an outsized impact, right? We’ve had a stable, if not very satisfying, situation in Afghanistan. I think Anne [Gearan, Washington Post White House correspondent] is right. The conclusion is we can’t make it better. But we now see in the last few days, we can make it worse…. 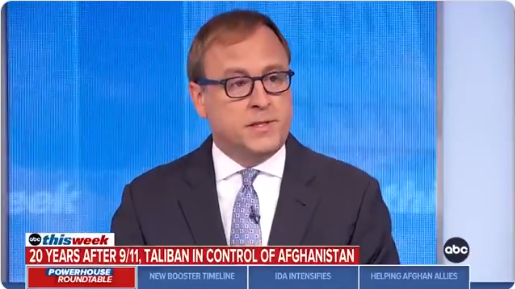 ABC‘s Jonathan Karl (This Week, 8/29/21): “Now the big question is, does Afghanistan once again become a safe haven for terrorist attacks on US interests around the world or at home?”

ABC reporter Jonathan Karl offered this analysis as a panelist on ABC‘s This Week (8/29/21):

Now the big question is, does Afghanistan once again become a safe haven for terrorist attacks on US interests around the world or at home?… You know, maybe part of the reason why Afghanistan had not been such, is that it was a military presence in Afghanistan. But now we will have this over-the-horizon capability, but the bottom line is the terror threat has increased, and our ability to combat it has decreased….

President Biden has portrayed this as, he has two choices. Basically, go back in, be in the middle of a revived civil war. Send in more troops, or leave as quickly as possible. Those were, I think, not the two choices, and the bottom line is that the intelligence that he was receiving, and the advice from his military, was not on the dangers of staying a little while longer. It was on the dangers of leaving too quickly. 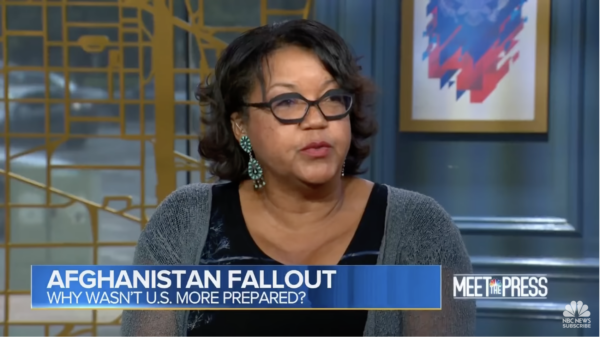 New York Times correspondent Helene Cooper (Meet the Press, 8/22/21): “For 20 years, Joe Biden has believed that he knew more about Afghanistan, and he was the only realistic skeptic in a roomful of people who had pipe dreams.”

The one thing that I feel like this whole conversation on Afghanistan constantly doesn’t reckon with is what some people in the military would call the original sin. And that is the decision that President Biden made that withdrawing 3,500 troops from Afghanistan, rejecting the advice of his Defense secretary and his chairman of the Joint Chiefs of Staff to leave 3,000 to 4,500 people there, was not going to lead to the insane chaos that we are seeing now….

What I find so interesting about all this is for 20 years, Joe Biden has believed that he knew more about Afghanistan, and he was the only realistic skeptic in a roomful of people who had pipe dreams about this…. That’s exactly the problem, because he came in and he was not going to listen. He believed the Pentagon had rolled a successive number of administrations for 20 years. And he was going to stand up to them.

Such trust in the military for policy decisions, not just tactical ones, extended to questions from Sunday hosts, as when NBC‘s Chuck Todd (8/22/21) pressed the National Security Council’s Sullivan:

So you followed the military advice on closing Bagram. But the same military advisers were telling you to keep a force on the ground. They told you not to pursue this withdrawal agreement with the Taliban, correct?

The programs showed no similar concern for gender parity among their interview guests. Of the 36 featured guest appearances, only six were women. Fox featured no women as guests in the three-week study period, and no outlet had more than two. The roundtable guests were essentially balanced by gender, with 17 women and 16 men. 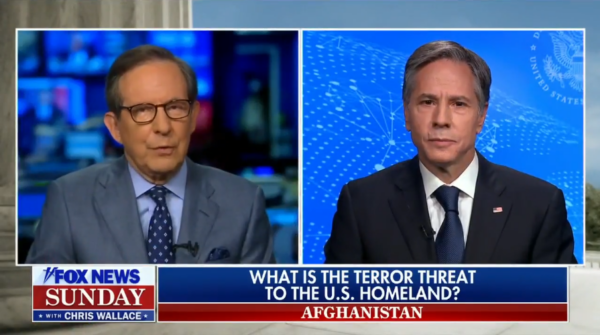 Chris Wallace (Fox News Sunday, 8/22/21) to Secretary of State Antony Blinken: “Joe Biden…has made a pretty cold calculation that, for instance, the plight of Afghan women…is not a matter of national security.”

While they made no efforts for gender parity among interview guests, women did appear frequently as talking points against the withdrawal (FAIR.org, 8/23/21). Fox News‘ Chris Wallace (8/22/21)—one of the network’s few remaining journalists to not wear their partisanship on their sleeve—offered his frank assessment of Biden’s choice:

It seems to me that we learned a lot about Joe Biden this week. That for all of the talk about his empathy, that, in fact, he has made a pretty cold calculation that, for instance, the plight of Afghan women—and there’s every reason to believe their lives are going to get a lot worse now with the Taliban in charge—is not a matter of national security.

So what does all this mean for America’s image in the world, and for what President Biden has spoken so forcefully about, the need to fight on behalf of democracy and democratic values? To see us leaving, and an extremist group coming in and taking power that wants to close down the right of girls to go to school, that is executing surrendering soldiers, that is anything but representative of those democratic values that President Biden has said that the United States must stand for.

CNN (8/29/21), however, was the only outlet to actually feature an Afghan woman as an interview guest.

* Not counted in statistics as a military/industrial complex tie.