I stumbled across the accompanying illustration years ago, while doing research on a racial incident in Texas. It obviously grabbed my attention. 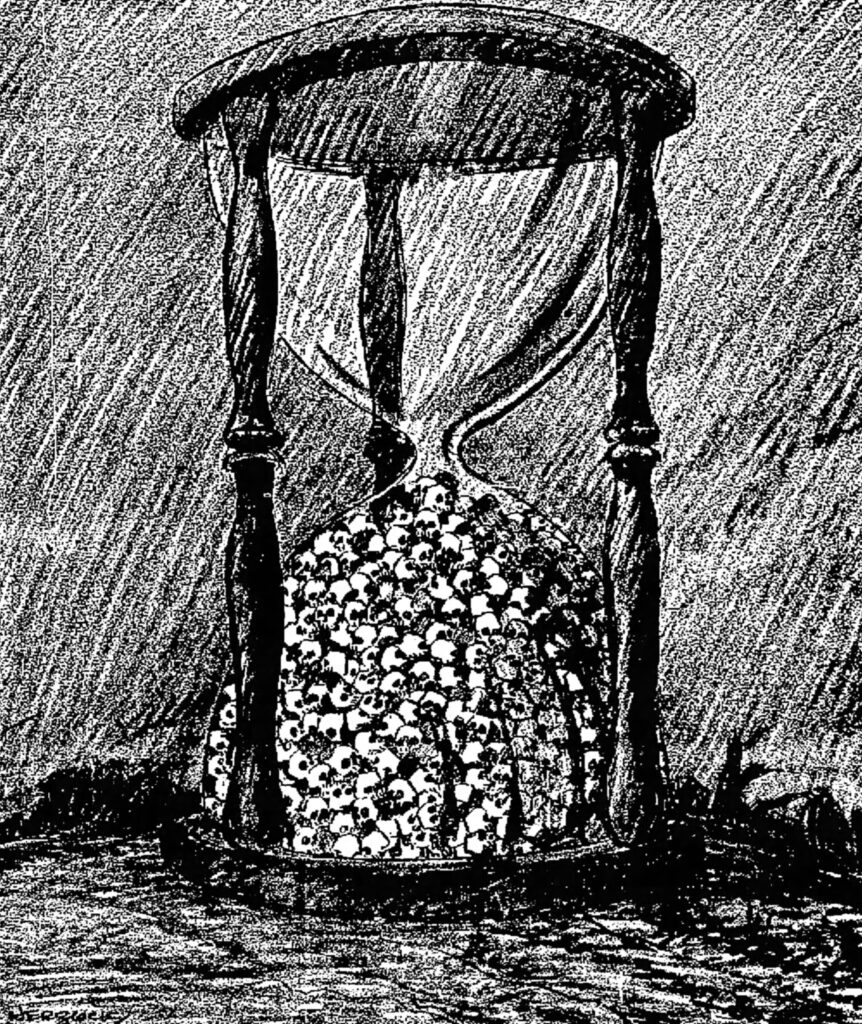 The image was published in the Monday, July 26, 1937 edition of the Brownsville Herald. The caption above it read “Spain—One Year.” It referred to the Spanish Civil War.

This artistic expression would have been evocative even without a caption; but, generally speaking, I pay attention. I knew immediately how prophetic this editorial image had been.

The illustration was created to make a point about a tragedy that was playing out. The fascist, conservative-leaning Spanish military had risen up to rid the country of its liberal government, and the carnage was frenzied and ruthless. The coup sparked international outrage. Thousands of progressives from all over the world came to join or support the liberal freedom fighters, including Langston Hughes (black poet, activist and leader of the Harlem Renaissance), Paul Robeson (black athlete, singer, activist and stage and film actor), Ernest Hemingway (whom the struggle inspired to write For Whom the Bell Tolls), George Orwell (author of 1984), etc. All cultural heavyweights, no question. But the fascists were supported by Adolph Hitler, Benito Mussolini and Texaco.

If American President Franklin Delano Roosevelt had properly leashed Texaco [Parent company is Chevron — Ed]—who fueled the fascist military vehicles and planes (which were furnished by Germany and Italy) on credit, the good guys might have prevailed. And if the Roosevelt Administration had realized that the Spanish Civil War was a proving ground for German tanks and aircraft, and supplied the freedom fighters instead of allowing Texaco to bankroll the fascist transport and bombing enterprises, World War II might have been averted altogether—or at least reduced in scope and scale.

That’s why I saved this illustration.

Time is running out.

Our foe is not a mad dictator or foreign, rogue nation. Our enemies are complacency, apathy, ignorance and greed, and we seem powerless against them. We don’t even seem to be able to act in ways that assure or even improve the chances of our own long-term survival. We are afraid to rock the proverbial boat. We don’t want to get passed up for that next promotion or pay raise, or jeopardize our retirement plans. We cling wishfully to the notion that things can continue on as they always have. We want to have fun and indulge ourselves, and enjoy the fruits of our acquiescence. Perhaps, especially if the end is nigh.

But make no mistake. This illustration depicts our current future and the natural world’s only hope. It’s unpleasant to contemplate, but unequivocally criminal not to address.

We still have flesh on our bones. We have, at the very least, a disappearing window of opportunity, a hope, a slim chance. And if we acknowledge and accept the dangers of climate change, the growing catalog of environmental perils and the certainty of widespread ecosystem collapses, maybe we can finally act and survive, atone and replenish.

Oblivion doesn’t discriminate between Republican or Democrat. Extinction will not be reserved for Liberals or Conservatives. And neither side can solve these issues unilaterally.

Surely you and I can find common ground here.

It’s true, I’ve written fiery diatribes and practically entire books condemning American conservatives, but Republicans and Democrats are both failing us. And the empty skulls draining through the narrowed hourglass passage won’t just be emblazoned with swastikas or peace signs. We will all be represented. The timekeeper has been turned and our existences are piling up. Can you love thine enemy? Can we love our own neighbors? Do we still give a damn about our children’s and grandchildren’s futures? Will the meek inherit the earth or are they actually destroying it?

Can we find common ground in time? Can we join forces before the forces that threaten us all seal our fate?

Can we get our leaders to put a leash on the oil and gas industry? Can we come together and serve our mutually beneficial collective interests?

Fossil fuel apologists will cry foul here, but the industry’s record is clear. They’ve been aware that their products were bad for us and our environment for decades. And they’ve openly and unconscionably lobbied against efforts to clean up their act over the same period. In fact, they’re really no different than Texaco in the late 1930s, embracing fascism, profiting off death and ensuring injustice and widespread destruction.

Forward-thinking folks around the globe are once again joining the good guys, but America, again, is not. Our supposed land of the and the home of the brave is standing on the sidelines. But who are we kidding?

The United States is the most reprehensible fossil fuel profiteer on the planet and, to most of the rest of the world, America appears to be the mad dictator and rogue nation that sentient humanity must stop.