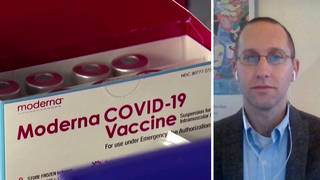 Oxfam America has accused Moderna of misleading its investors about an ongoing dispute over whether it needs to share vaccine patent rights with the U.S. government. Oxfam filed a shareholders complaint against Moderna with the Securities and Exchange Commission over the company’s resistance to recognizing the role played by three scientists with the National Institutes of Health in developing the vaccine. We speak with Robbie Silverman, senior corporate advocacy manager at Oxfam America, who says the federal government owns a right to license the vaccine to manufacturers. “It is simply not sufficient just to vaccinate the U.S. or just to vaccinate rich countries, because the virus knows no national boundaries,” says Silverman, who claims Moderna is “essentially doing almost nothing to vaccinate low-income countries, and that has negative impacts for all of us.”

[1] No One Is Safe Until Everyone Is Safe: Oxfam on Vaccine Equity & Taking On Moderna | Democracy Now! ➤ http://www.democracynow.org/2021/12/23/oxfam_moderna_vaccine_patent_rights