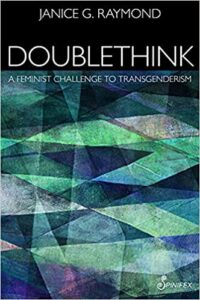 There’s a sad irony at the heart of Janice Raymond’s new book on transgenderism and feminism. After decades of research and activism, she is uniquely qualified to contribute to the polarized debate over these issues. But because she has long been demonized by the transgender movement, her insights on sex and gender will be overlooked by many.

Doublethink: A Feminist Challenge to Transgenderism explains why the radical feminist analysis that Raymond articulates so clearly is not a threat to trans-identified people but rather an alternative to the transgender movement’s liberal precepts, which are biologically incoherent and anti-feminist. Raymond shows that we can critique the ideology of the transgender movement without ignoring the suffering of people with gender dysphoria. We can affirm the rights of girls and women while rejecting discrimination against trans-identified people.

Doublethink deepened my understanding of the liberatory promise of radical feminism—not just for trans-identified people but for us all. That shouldn’t be surprising, given radical feminism’s trenchant critique of the many dimensions of patriarchy. As Raymond reminds us, “Feminists invented gender non-conformity.” Feminists such as Raymond recognized that patriarchy turns the biological sex differences between male and female into the oppressive gender norms of masculinity and femininity, which disadvantage and sometimes destroy girls and women while constraining the humanity of boys and men. Sex differences are a biological reality that can’t be changed. Gender norms help perpetuate institutionalized male dominance, a political reality that we must change.

While the central analysis of transgenderism in Doublethink is not new, Raymond offers insights into the cultural changes since she first published The Transsexual Empire in 1979. But no matter how insightful, the larger radical feminist critique has lost ground—not only to conservatives who embrace patriarchy but to progressives who claim to oppose male dominance but avoid some of the political commitments that would make their politics meaningful. More on that later.

Perhaps most importantly for me, Doublethink made me realize that my critique of transgender ideology should be recast as a challenge to the theology of the trans movement. Raymond’s analysis demonstrates why the current liberal/left embrace of transgenderism is more like religious fundamentalism than political ideology.

Raymond details the physical and psychological dangers that transgender medicine poses to trans-identified people, the constraints that transgender policies place on girls and women, and the threats when trans-identified people claim the right to lesbian status. Despite those well-documented negative consequences, Raymond points out that in progressive circles, “To question any trans precept is to question trans existence.” Let me quote her at length, with my emphasis on certain terms added.

At the core of trans ideology is the insistence that self-declared women (men) are women. But self-declared women are not women historically, experientially, or biologically, and certainly not by reason of a simple declaration that they expect everyone to accept because they say it is so. “I feel it, thus it is real.” The feeling may be real, but the facts are otherwise. If critics don’t cooperate in this fantasy, they are labeled ‘violent TERFs’. Any dissent from trans dogma is considered a mortal sin, even when male biology and masculinist behavior are graphically on display. In translandia, any disagreement with trans dogmas is treated as disputing trans existence or, in trans speak, as “killing us.”

Raymond returns to this point at the end of the book, and again I’ll add emphasis.

Refusing to accept that men can be women is not disputing transpersons’ existence; it’s disputing their gender identity and their claim to be women. When the transgenderist position is ‘no discussion of our very existence,’ this censors legitimate questions about what existence means. It promotes a fundamentalist belief system, a doctrinaire faith of trans evangelists who punish misgendering and mispronouning as blasphemy and that consigns doubters to damnation.”

Raymond’s observations explain why challenging the transgender movement’s arguments is less like a political and intellectual discussion and more like an engagement with faith-based systems, those that makes claims not based on evidence and reason. In my own experience, the times that liberal/left people have “canceled” me because of my alleged transphobia—rescinding a speaking invitation or removing an article I wrote—felt not like an intellectual or political disagreement but more like a religious shunning. I was being cast out of the circle of the elect, not on the basis of a reasoned response to my arguments but because I had dared to make the arguments at all. I was treated like a heretic.

An aside: This is not a suggestion that all of life can be reduced to evidence and reason. Feelings, which are sometimes inarticulate, matter in our lives. When we are moved to tears by a song or express our love for a partner, no one expects an evidence-based logical argument. But in social interaction in a multicultural society, whether those interactions are governed by law or custom, we expect more than faith-based claims. When arguing for public policy, we have a responsibility to provide reasons that can be articulated clearly, based on evidence that is transparent.

Here are examples of what that means in our daily lives. When committed Christians say “God loves us,” I take seriously the feeling they are describing and don’t doubt their sincerity. But that is not evidence of the existence of a divine entity whose commands we must follow. Similarly, when trans-identified people say, “I am biologically male but I feel like a woman (or vice versa),” I understand the feeling and accept their sincerity. But that is not evidence that a male is female. An internal subjective experience of gender is not evidence that gender is an innate, immutable, and unchallengeable feature of one’s personality rather than a social construct.

Here are practical applications. If I were in a meeting that began with a sectarian prayer, I would not recite the prayer because to do so suggests that I endorse that theology. In a multicultural society, such compulsion should be rejected as a violation of freedom of conscience. Similarly, if a meeting opened with the chairperson asking people to state their pronouns, I would decline because to do so suggests that I endorse the ideology/theology of the transgender movement. Demanding that I participate in pronoun announcement would be like compelling people to pray. Only fundamentalists try to impose such demands.

By now, transactivists likely will have concluded I’m an anti-trans bigot. But I hope that critics will read Raymond’s book, which is not bigotry but simply a different approach to sex/gender struggles that not only could contribute to individuals’ mental health but also to a more just society. Such a feminist approach to gender non-conformity does not require us to ignore material or historical realities and is consistent with biology and the politics of liberation. Radical feminists don’t deny the experience of gender dysphoria or gender dissatisfaction, but rather present an alternative path to deal with those experiences.

Raymond analyzes the many issues on which this feminist approach is needed today: the importance of female-only spaces and programs for safety and to promote justice, fairness in girls’ and women’s sports, the integrity of lesbian communities. These are important goals for public policy and in social relationships, but the trans movement tries to shut down the debate. Raymond points out that too often “disagreement is renamed discrimination” and leads to claims that anything less than full acceptance of all transgender demands will lead to increased trans suicides. That leads many transactivists to label Raymond’s writing “hate speech.” It’s a strange claim, given what she actually writes:

Trans-identified people are entitled to the same human and civil rights as others. Recognizing these rights, however, does not mean that we must accept that hormones and surgery transform men into women and women into men; or that persons who self-declare as members of the opposite sex are what they subjectively claim to be; or that hormones and surgery are ‘life-saving and necessary treatments’ for those seeking transition.

As I have mentioned, I’ve also been accused of hate speech. Since my first article on this subject in 2014, I’ve faced transactivists trying to shout me down at some of my public presentations. I have been invited to speak about my varied political projects and then disinvited when someone complained about my writing on transgenderism. I have been told by editors with whom I had worked for years that they would no longer publish anything written by me on any subject. And I’ve lost friends and political allies who decided to distance themselves from me rather than risk guilt-by-association.

None of that has been fun, but if I were ever tempted to feel sorry for myself, Raymond’s book would snap me out of it. She includes stories of the many women who have endured not only the petty harassment and shunning I’ve experienced but much more—being fired from jobs, having scholarly research trashed for ideological reasons, being denounced by colleagues, and facing threats and assaults. There are always myriad reasons for differing treatment in different cases, but it’s hard not to notice that women routinely experience harsher treatment than men do. For anyone with a radical feminist critique of patriarchy, that’s not surprising.

One thing is for sure—no one has ever told me “suck on my lady stick.” When a man who identifies as a woman wants to verbally assault a woman, the penis becomes a lady stick but remains a potential weapon. It’s a trans variation on something that women hear from angry men all too often. Though only a minority of transactivists speak that way, such comments show up regularly online, and the failure of the transgender movement to condemn such misogyny suggests the movement is not serious about challenging patriarchy.

The anti-feminist character of so much transactivism raises a troubling question: Why are so many progressives so entranced with transgender theology? Raymond points out that the liberal/left has never been a political formation with deep feminist commitments, genuflecting to anti-sexist politics only when necessary. For the left, embracing transgenderism creates the appearance of a critique of patriarchy without a commitment to substantive actions. That’s why so many of the same people who embrace the subordination of women in the sexual-exploitation industries (pornography, prostitution, stripping) tend to endorse the transgender movement’s policy goals. In both cases, an analysis of institutionalized male dominance gives way to a liberal individualist account. Without that deeper structural analysis, so-called sex work and transgenderism are promoted as transgressive, and a radical feminist analysis is dismissed as out of date.

Raymond ends her book with an important insight that links the two issues. The radical feminist critique of prostitution was rooted in the experiences of survivors, the women who have exited the sexual-exploitation industries and spoken about the abuse. Raymond suggests that the voices of detransitioners—women who once transitioned to male status but later reasserted their identity as female—should be central in our analysis. These “survivors of transgenderism” are starting to speak out, to organize, to challenge the idea that the solution to the distress of living in patriarchy is transgender ideology. As detransitioner Keira Bell put it, “I recognized that gender dysphoria was a symptom of my overall misery, not its cause.”

In her 1979 book on the trans movement, Raymond challenged the medicalized and individualist response to the rigid, repressive, and reactionary gender norms of patriarchy. Doublethink demonstrates why her analysis is more desperately needed than ever. Rather than embrace illusions about “sex change” or “gender identity,” she reminds us of how genuine freedom can come through feminist struggle: “If we expand the bandwidth of what it is to be a man or a woman, we don’t need to seek a change in sex but rather a change in society’s codes of femininity or masculinity.”

This content originally appeared on Dissident Voice and was authored by Robert Jensen.