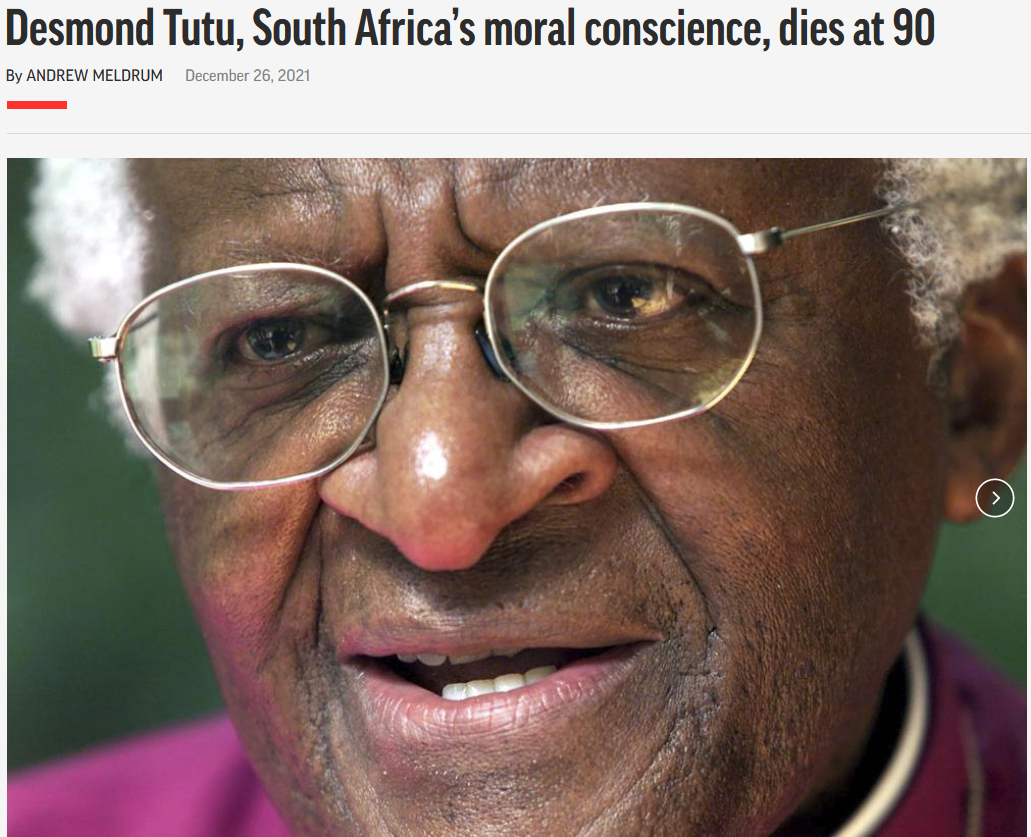 Obituaries in the corporate and establishment press for South African Archbishop Desmond Tutu rightly celebrated him not only as one of the key leaders of the struggle against apartheid in his own country, but as a global advocate against oppression, including being a fierce Christian voice against homophobia.

These obituaries often underplayed or ignored, however, that Tutu, as a South African crusader against apartheid, helped to normalize the idea that Palestinians suffered under a similar apartheid system. Likewise marginalized was the enormous amount of hate he received for his advocacy for Palestinians and his criticism of the Israeli government.

The New York Times (12/26/21) obituary reduced his Palestine advocacy to one incident in 2010  when “he unsuccessfully urged a touring Cape Town opera company” to not perform in the country, quoting his urging the company to postpone its production of Porgy and Bess “until both Israeli and Palestinian opera lovers of the region have equal opportunity and unfettered access to attend performances.” 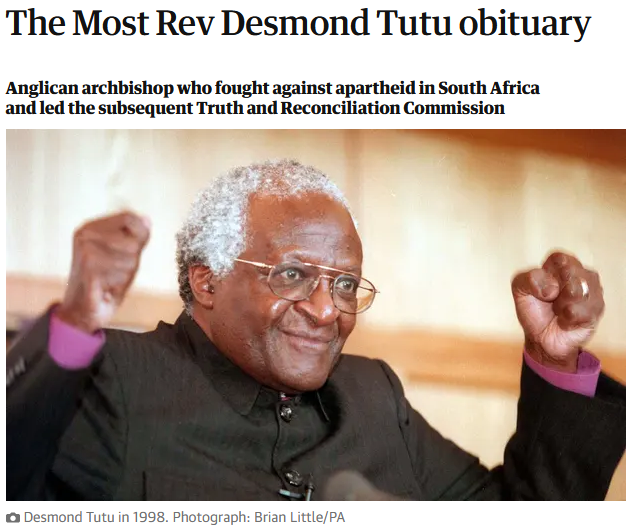 Critics complained that the Guardian‘s obituary (12/26/21) contained all of four words on Desmond Tutu’s criticism of Israel. The paper later printed an op-ed (12/30/21) on his advocacy for Palestinians.

As of this writing, more than 3,000 people had signed a petition demanding a correction to the Guardian’s obituary (12/26/21). Petitioners complained that while the obit

documents the archbishop’s tireless struggle against oppression and racism of all kinds…Tutu’s repeated criticism of Israeli apartheid policies, and his commitment to the cause of the Palestinian people, are all simply omitted.

The article’s lone mention of Israel cited Tutu’s blasting “the US for supporting the Contras in Nicaragua and Israel for bombing Beirut.” The petition said that the article “exemplifies the Guardian’s consistent pro-Israel bias,” a trend FAIR has previously documented (2/22/21). According to the Palestine Solidarity Campaign (12/30/21), activists were concerned with the Guardian’s “deletion of a large number of comments in response to the obituary which all highlighted Tutu’s condemnation of Israeli apartheid.” The comments were restored upon pressure, the group said, but the original deletion, the group said, still inspired unease.

The Guardian (12/30/21) did eventually publish a piece on Tutu’s Palestine activism, in an apparent response to the media activism.

As the Middle East Eye (12/26/21) reported, Tutu likened Palestinians’ political conditions to those of Black South Africans under apartheid. He supported the boycott, divestment and sanctions (BDS) campaign as a form of peaceful pressure, and often spoke of Israel’s policies as being contrary to the teachings of Jewish and Christian values.

Upon his death, the Israeli newspaper Ha’aretz (12/26/21) quoted Tutu’s defense of boycotting Israel, saying those who continue to do business with Israel “are contributing to the perpetuation of a profoundly unjust status quo.” “Those who contribute to Israel’s temporary isolation,” meanwhile, “are saying that Israelis and Palestinians are equally entitled to dignity and peace.” 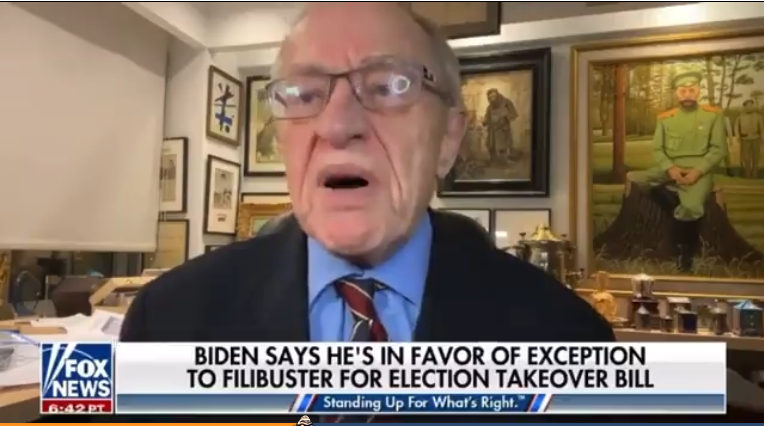 Alan Dershowitz on Fox News (12/27/21): “Let’s make sure that history remembers both the goods he did and the awful, awful bads that he did as well.”

Skating over Tutu’s outspokenness about Palestinian rights in his official obituaries does a disservice to Tutu’s life, as his intense advocacy for Palestinians was a major part of his devotion to social justice, and like all campaigns for social justice, it inspired reactionary pushback from defenders of the status quo.

The pro-Israel Anti-Defamation League (5/3/12) said that he “veered into classical religion-based antisemitism” with his condemnation of Israel’s treatment of Palestinians. AP (10/4/07) reported that Tutu had even been disinvited from speaking at a university because the administration “worried his views on the Israeli/Palestinian conflict would offend the Jewish community.”

The London Times (1/13/11) reported that a petition “signed by three well-known members of Cape Town’s Jewish community” accused Tutu of being a “bigot, dishonest, and a defamer of Israel and the Jewish community.” “Over the years,” they said, “Archbishop Tutu has been guilty of numerous antisemitic and anti-Israel statements.”

Alan Dershowitz—lawyer for Donald Trump, Harvey Weinstein and Jeffrey Epstein—even took to Fox News (12/27/21; Crooks & Liars, 12/28/21) to dance on Tutu’s grave: “Can I remind the world that…the man was a rampant antisemite and bigot?”

This backlash is rooted in the idea that advocacy for the Palestinians must be antisemitic because Israel is an officially Jewish state—an idea that borrows from the now-ridiculous notion that fighting apartheid in South Africa was somehow anti-white. The Jewish Telegraphic Agency‘s obituary (12/26/21) highlighted this absurdity, saying Tutu “identified closely with the historical suffering of the Jewish people in his forceful advocacy against apartheid in South Africa.”

Underplaying this aspect of Tutu’s life also understates his impact, because it was Tutu, as a hero of South African liberation struggle, who gave major legitimacy to both the movement to boycott Israel and to critics who labeled Israel’s occupation as apartheid. Tutu’s early recognition that Israel’s anti-Palestinian policies mirrored what he had campaigned against in South Africa laid the groundwork for human rights groups like Human Rights Watch (New York Times, 4/27/21) and B’Tselem (NBC, 1/12/21) to recognize Israel’s occupation as a form of apartheid.

The omission or underplaying of this facet of Tutu’s life is a reminder of how scared many corporate media institutions are of touching what is often called the third rail of politics. That the AP‘s obituary, for example, can highlight Tutu’s heroic commitment against homophobia but not his views on the Israel/Palestine conflict, or the backlash he faced as a result, underscores the limits of intersectional social justice in the establishment press.

The post Tutu Obits Underplay His Advocacy for Palestine appeared first on FAIR.