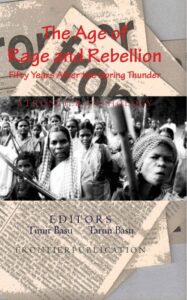 The words were red. And the rifles were red too. It was a time to win back everything that belonged to the people. A flame of rebellion raging against tyranny of the exploiting classes in remote Naxalbari in north-eastern India spread to different parts of the vast land of India, and in its neighboring countries. The uprising in Naxalbari that eventually embattled peasants and workers throughout the subcontinent against onslaught of moneyed classes still reverberates across decades.

The Naxalbari uprising and ensuing rebellion, led by Charu Majumdar, a simple man, had always been either consciously ignored or besmirched in the history of the subcontinent by the bourgeois and a faction of “left” historians. While unapproving bourgeois historians begrudge the apparent “failure” and “ferocity” of the Naxalites, the movement remains a beacon of hope across the sub-continent.

With 2017 marking the 50th anniversary of Naxalbari Uprising, as a tribute of remembrance to the martyrs of the movement, Frontier, the famous independent socialist weekly from Kolkata, has published an anthology of 26 articles and two interviews titled The Age of Rage and Rebellion: Fifty Years After the Spring Thunder. The articles in the collection are presented chronologically. The 239-page anthology is edited by Timir Basu, editor of Frontier, and Tarun Basu.

The authors, many of whom were veterans of the rebellion, recollect and analyze facts, untold truths, challenges, and human emotions that culminated into the movement and continue to fuel such movements across the sub-continent.

The contributors include Bernerd D’Mello, deputy editor of Economic and Political Weekly, Timir Basu, Lawrence Lifschultz, US journalist and South Asia correspondent of Hong Kong-based Far Eastern Economic Review in the 1970s, and Varvara Rao, eminent Telegu poet and one of the leading social rights activists.

Published in July 2021 by Frontier Publication, the anthology is an ode to an age of rage and rebellion; an age that shaped the form of political struggle for people in the sub-continent. It is not just a collection of reminiscences but depicts a tale of revolutionary ardor, vigor, and absolute dedication that was quite unmatched in the sub-continent’s history of political struggle.

How the Steel was Tempered

“Against incredible odds,” the Editors’ Note reads, “the peasant rebellion in Naxalbari inspired hope and motivated a generation. Hundreds of students and youth threw themselves into building a new society, free from exploitation. But in the end the movement failed to decisively break with the prevailing leftist model of struggle. People, including revolutionaries make mistakes. But they can be corrected, if revolutionary movements including their leaderships, promote the capacity for sober self-reflection and flexibility and avoid dogma. Fifty years later the flame lit by the historic ‘Naxalbari Peasant Uprising’ burns bright. Even though there is an unprecedented right-wing swing in political arena, the spirit of ‘Naxalbari’ reverberates still as one of the greatest social changing events of 20th century. It is the task of communist revolutionaries to analyse it and learn the lessons of both its achievements and its shortcomings for the revolution of the future.”

The Naxalbari Uprising imbued into the then political left and progressive youth a radical way of worldview. It carved out a path that challenged the then existing ideologues and presented a revolutionary way out of the shackles of capitalist and semi-feudal system expropriating profit out of the masses throughout the sub-continent.

It is not enough to call that period a turbulent one; it was a period of tremendous restlessness. After entering the Presidency College, I quite naturally got involved in the student movement. I got attached with the left student movement, although in the campuses of the College and the University of Calcutta, the rightists were holding sway. When we were endeavoring to build up a leftist student organization in the Presidency College, ‘Naxalbari’ was yet to happen. Yet we earned the stigma of ultra-left because we had become vocal against the bureaucratic central leadership.

In the beginning I, like many others, had only a limited conception about revolution, and although I studied much about the Russian, the Chinese and the Cuban Revolutions, my knowledge of Marxism was extremely poor. ‘Naxalbari’ provided the opportunity for fresh thinking. [“In Search of Maoist Revolution”]

While it has been branded by the bourgeois academia and media as a rebellion ‘lost’, the Naxalbari Uprising with its ideology and practices forged by many frays in both philosophical and practical fronts, has held true to its utmost cause: the ultimate economic and political emancipation of the peasantry and the workers.

After Naxalbari, nothing remained the same as before. What may broadly be called the Naxalite movement went through many trials and tribulations, committed many mistakes and even blunders with tragic consequences in some cases, faced many setbacks and fragmentations, but was not wiped out despite severe state repression. Over time, new thoughts regarding lines of action, and new understanding of the national and international situations emerged within the movement. One fact is, however, certain. No section of Naxalites has become defenders of status quo or of communal polarisation. (Preface)

Even, as contemporary bourgeois history likes to record it as a rebellion ‘snuffed out’, the flame of Naxalbari still burns bright. It burns in the Dandakaranya Forest, it burns in Jharkhand; its philosophy of activism is still vibrant.

Bernerd D’Mello analyzes in his article “Whither Maoist Movement”:

The second phase of the Naxalite movement, from 1977 to 2003, was marked by mass organizations and mass struggles, especially in North Telangana and other parts of the then-province of Andhra Pradesh, and in what was then central and south Bihar (the latter now the province of Jharkhand), as also in parts of what is called Dandakaranya, the forest area situated in the border and adjoining tribal districts of the states of Andhra Pradesh, Chhattisgarh, Maharashtra, and Orissa. The Bastar region in southern Chhattisgarh slowly began to emerge as a stronghold. Armed squads and village-level militias were organized in self-defense. ‘Land to the Tiller’ and ‘Full Rights to the Forest’ were the core demands, and within the movement, emphasis came to be placed on sensitivity to issues of gender and caste. Especially in Bihar, the Maoist movement, with the backing of its armed squads, combated the upper-caste landlord senas (armed gangs) with considerable success.

Since 2004, with two remarkable mass organizations already in place, the Dandakaranya Adivasi Kisan Mazdoor Sanghatan and the Krantikari Adivasi Mahila Sangh — one of tribal peasants and workers, the other, of tribal women — and a Bhoomkal Militia (its name derives from a 1910 tribal rebellion) that feeds into the People’s Liberation Guerrilla Army, the Bastar region has become a bastion of Maoist resilience. It has successfully prevailed over a state-backed, state-armed private vigilante force called Salwa Judum (translated as “purification hunt”) and has even kept a major armed offensive of the paramilitary and armed police, called Operation Green Hunt, at bay. It has also managed to engage in ‘construction in the midst of destruction’, putting in place Janathana Sarkars, or people’s governments, albeit in embryonic forms, within its guerrilla bases.

People’s struggle, class struggle to be specific in the Indian sub-continent, is now haunted by looming lumpen characteristics of a section of the left and constant onslaught by imperialism. Standing apart from the malpractice of mere adventurism and slogan-mongering, the vanguard trailblazers of the Naxalbari Uprising still continue a political and armed struggle based on a concrete ideology that represents excellence of humane values, honesty and dedication to the greater proletarian causes.

The uprising, in its essence was one of the most radical forms of class struggle led by the masses the sub-continent had ever experienced since Telengana. It forced into fore class questions and equations that were never-before dealt with such ferocity in the history of the sub-continent. The Naxalbari Uprising was also a testament to people’s leadership and dedication to the Marxist-Leninist way of work in its true essence.

The broad strategic objective of the Communist revolutionaries who launched the Naxalbari struggle [was] to liberate the countryside by waging a protracted people’s war and then encircle the cities. … Charu Majumdar further elaborated on the problem of mobilising the backward sections of the peasantry. While insisting on the necessity of secret political propaganda by the party so as not to prematurely expose it to repression, he, however, pointed out that backward peasants would be late in grasping politics under this method. ‘And for this reason’, he wrote, ‘it is and will be necessary to launch economic struggles against the feudal classes. For this reason it is necessary to lead movements for the seizure of crops, the form of the struggle depending on the political consciousness and organisation of the area.’ He further stated that ‘without widespread mass struggle of the peasants and without the participation of large sections of the masses in the movement, the politics of seizure of power would take time in striking roots in the consciousness of the peasants’.1

Reflecting on tactical and class questions Farooque Chowdhury writes [“The Historic May 25, 1967”]:

Naxalbari is part of a people’s journey to organize a radical change of the society, of the property relations, of the position the exploited the poor-the powerless are pressed down into. A lofty, noble, humane aim it is. It never confused the questions of position and role of the propertied classes and their political power. And, it never attempted to compromise interests of the exploited, and never appeased the exploiting classes. The sacrifice Naxalbari made is the evidence of its courageous and dignified stand it took to defend the exploited. Strategic and/or tactical errors/flaws don’t invalidate significance and contribution of Naxalbari in the political struggle people wage although efforts are there to demean the initiative by condemning only the errors/flaws. The quarter fails to look at the perspective of the initiative and the initiative’s errors/flaws – a wrong way to evaluate any political initiative.

It must be understood that Naxalbari played a defining role in shaping the form and nature of class struggle in the sub-continent. Without considering the underlying class questions, the class-relations and assessing the then and current state of class antagonism in the sub-continent, evaluations of the Uprising will only be incomplete and can often be misleading.

And Quiet Flows the Brahmaputra

From the banks of murmuring Jahnavi to the flood plains of expansive Brahmaputra, the fighting masses of this sub-continent, braving discrimination by moneyed classes for centuries, against extreme expropriation and extortion of people-owned resources, have always held true, true to their spirit of rebellion, progress, and love. The Naxalbari Uprising, in its truest form, not only embraced unequivocally those purest of human values, but sought a radical way toward achieving a functional recognition of those. Not only was the rebellion unique in its way of redefining equations of proprietorship, it forced to surface the evident class struggle that always raged behind the apparent dissociation of the peasants and the proletariat from mainstream politics of the bourgeoisie and the petty-bourgeoisie.

And, while contemporary bourgeoisie history continues to forget and forsake the rising of the exploited, the Naxalbari Uprising still resounds across ages. The tortured, decapitated, cruelly murdered martyrs of Naxalbari still stand in the sub-continent’s history as heroes who challenged a juggernaut, bestial system running on profit and expropriation of masses. The resplendent red of Naxalbari still sings triumphantly of a new age to come, a new age led by people, workers, and peasants.

Omar Rashid Chowdhury, a civil engineering graduate from Bangladesh University of Engineering and Technology (BUET) and a learner, writes from Dhaka, Bangladesh.

The post The Uprising of Peasants and Workers in Naxalbari first appeared on Dissident Voice.

This content originally appeared on Dissident Voice and was authored by Omar Rashid Chowdhury.