The January 7, 2022, episode of CounterSpin included an archival interview with Barbara Briggs that originally aired June 5, 2015. This is a lightly edited transcript.

Janine Jackson: If the Triangle Shirtwaist Factory had had its appropriate response, there never would have been a Rana Plaza. But it didn’t, and there was. More than 1,100 people, mainly women, lost their lives in a factory collapse in Bangladesh—which might sound like a long way away, but they were making clothes that you might have on your back right now. We talked about that with worker rights advocate Barbara Briggs in 2015. 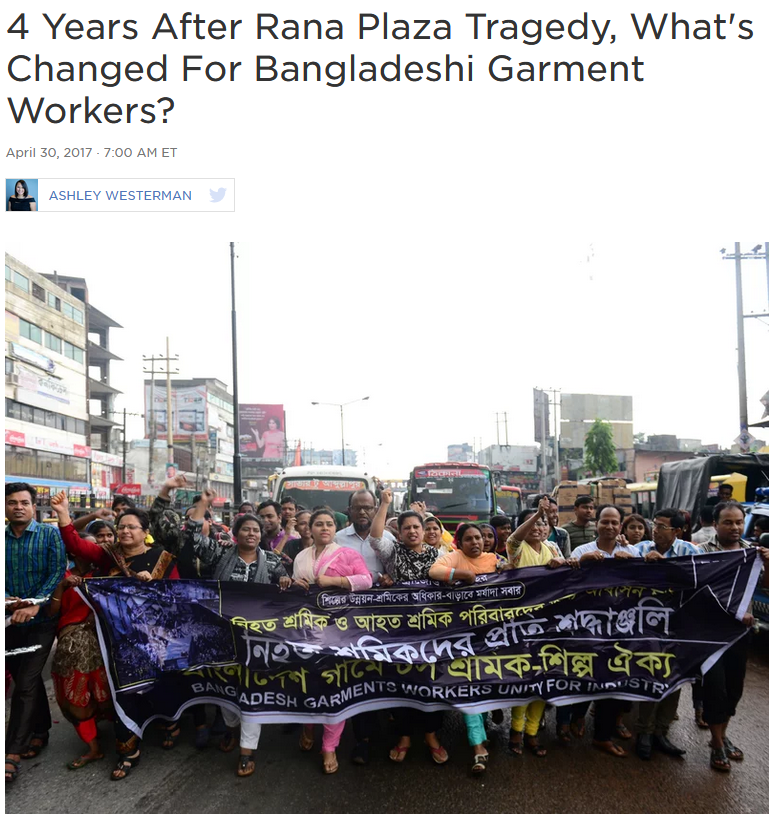 Officials in Bangladesh have filed murder charges against some of the people involved in the 2013 collapse of the Rana Plaza garment factory that killed more than 1,100 mostly women workers, and injured thousands of others under circumstances almost too cruel to fathom.

It doesn’t require speaking for the deceased to imagine that they would hope not only for justice for themselves, but for whatever actions are necessary to prevent such a disaster happening to others. Are we seeing some of those actions? Are real lessons being learned from what’s been called the garment industry’s deadliest disaster?

Joining us now to discuss these issues is Barbara Briggs, associate director of the Institute for Global Labor and Human Rights—where, I will note, I am a board member. Welcome to CounterSpin, Barbara Briggs.

JJ: We often hear the sweeping term “conditions,” the “conditions” in these factories. The charges here reflect different aspects of those conditions. There is the violation of safety rules; additional floors had been added to a building in a way that wasn’t structurally sound. But the Bangladeshi police report calls what happened on April 24 in 2013 a “mass killing,” and that’s because of actions that go beyond having workers in unsafe buildings. Can you remind us of what actually happened on that day?

BB: The history of what happened with Rana Plaza, and ending in the tragedy of April 24, really was a crime from beginning to end. As you said, there was too much sand in the concrete. There was poor quality steel used in the rebar. The building had been built up an extra three floors over its permitted five floors. And it was built as a commercial building, not an industrial building. And the weight of the heavy machinery and generators of the apparel factories on the upper floors was a much heavier load than the building was even designed for.

On April 22, big, visible cracks appeared in the building, and the building was evacuated. An inspector was called in, and declared the building dangerous. The bank and the commercial businesses on the first floor of Rana Plaza remained closed. But on April 24, the workers gathered, and they came to the factory, not to go in, but to find out when the repairs would be done, when they could expect to go back to work, and also when they would be paid for the almost month that they had worked.

The response of the owners of the five factories in the Rana Plaza building was that they ordered the workers to go back to work immediately, and said that if they didn’t, they wouldn’t be paid for the month. They had shipment deadlines; they had to get the product out.

For these workers, if you’re not paid for a month’s work, you’re not able to feed your families. Garment workers in Bangladesh at that point were making as little as 18 cents an hour, $38.65 a month; they really, literally, lived from hand to mouth. And they still do.

For the workers who still refused to go back into the factory, the owner of the building, Sohel Rana, who’s also a local strongman, called in thugs with sticks, and threatened that they would break the bones of anybody who didn’t go into the building immediately. So at 8:00 a.m., all the workers went into work. At 8:45 a.m., the electricity went out, which is not unusual in Bangladesh. And simultaneously, the five factories’ five big generators kicked on. Within minutes, the building began to rock and sway, and it went down with virtually all of the workers inside. 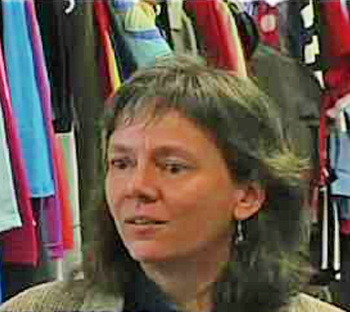 Barbara Briggs: “Not all is hopeless, and with international pressure, it’s possible to push change. “

The lesson that I take from this, for us an absolute certainty, is that if the workers in the Rana Plaza building had had a union to represent them, this tragedy would have played out very differently. The workers knew the building was dangerous. There were huge cracks; you could see from the outside to the inside. But alone and without the ability to come together, speak as a group and be represented, they became victims.

What happened in subsequent months, first of all, there were dozens of US and Canadian and European companies producing in those factories. Joe Fresh, Walmart, Gap and virtually every major US apparel company, and European apparel company, does produce somewhere in Bangladesh, because labor is so cheap.

I think what’s happened, what happened on that day, is that the international brands have realized that tragedies like Rana Plaza, which killed over 1,100 workers; fires like the Tazreen factory, which killed 112 behind locked factory gates just a few months before; these kind of accidents are just too great a reputational risk. And the companies do not want their products associated with workers who were burned and who were crushed to death.

And so there really have been ongoing, systematic efforts, and a fair amount of money, on an international coordination to see that these factories are inspected, and to assure that they’re at least basically safe. They’re demanding, and in some cases financing, the installation of fire exits, sprinkler systems, fire extinguishers and emergency trainings. But I’ve got to say that other kinds of abuses continue.

JJ: It sounds as though some, at least, of the transnationals involved have made some pledges, and have followed through on those, in terms of some infrastructural improvements. But what needs to happen that hasn’t happened?

BB: The direct contract factories really are beginning to get some of the safety requirements that they’re having. I mean, there’s training, they try not to lock the gates anymore, there are basic sprinkler systems and fire extinguishers and that sort of thing, fire escapes.

What we’re seeing, though, is that there still are considerable abuses. And we’ve always known that inside even the best facilities, worker treatment is not always good. And the law is not always respected.

So in factory after factory after factory, some of them producing for brands with really good and progressive reputations, we see extraordinary amounts of forced overtime. We see women, when they get pregnant, pressured and harassed into quitting, so that they don’t have to pay their maternity leave. We see workers screamed at and verbally abused.

And really, pretty much across the board, we see that the workers still do not have their right to organize, to form an independent union, and to bargain collectively. And we know that workers are the best monitors of conditions, and the best guarantors of their own safety, when they’re organized and have an independent voice. So this is a really big flaw, including for the ongoing safety of these plants.

JJ: In the changes that have come about, what have been some of the driving factors? It hasn’t all been noblesse oblige on the part of the companies. There also is organizing going on on the ground to try to build up the workers’ voice, is there not?

BB: Yes, although the unions are in a real one-down position. First of all, there are too many of them, and they’re not unified. However, there are very committed organizations that are trying to help the workers. It’s not shop floor organizing. It’s labor unions and federations on the street helping the workers learn their rights, helping them begin to advocate for themselves, and helping them out, going to the labor ministry, making complaints and that kind of thing.

Not all is hopeless, and with international pressure, it’s possible to push change. And the Institute, and our partners in Bangladesh, have actually experienced a string of victories in the last year or so, starting with exposing abusive conditions at the Ha-Meem Group, a factory called Next Collections producing, actually, it was for The Gap, a couple years ago. We’ve moved on to several factory groups where we’ve been able to clean up conditions.

Our estimate is that at this point, over 70,000 workers are in a better state now, meaning that instead of working until 10:00 or 11:00 or til midnight, or sometimes until 5:00 in the morning, and working seven days a week, their hours have been cut back, and the overtime that they work is voluntary. It’s paid correctly. There’s been an end to the double sets of books, where the workers get pay stubs that are meant for the monitors to see, but have no reflection in reality. Instead, what’s on their pay stub are the hours that they actually work, and they’re being paid correctly for the hours that they work.

Women who are pregnant are treated with respect and are given their legal, paid maternity leave, which in Bangladesh is they’re supposed to be paid eight weeks before the expected birth and then eight weeks after. It’s a matter of life and death for the woman and her infant and family, because when you’re paid, at this point, the lowest wage is 33 cents an hour, and the highest is for a garment sewing operator is about 44 cents an hour. But when you’re paid that little, you can’t save money to take that kind of time off. These are big differences in the lives of workers, and it really is international visibility and pressure that can drive these changes.

JJ: So when we talk about how media can be useful, it’s increasing visibility, not just to the problems, but also to those places and those situations where responsive policies have actually been put in place and are working.

JJ: All right then. We’ve been speaking with Barbara Briggs of the Institute for Global Labor and Human Rights. You can find their work on the web at GlobalLabourRights.org. Thank you very much, Barbara Briggs, for joining us this week on CounterSpin.

The post ‘Workers Are the Best Guarantors of Their Own Safety When They’re Organized’ appeared first on FAIR.