Manhattan District Attorney Alvin Bragg, who took office January 1, wasted no time getting in the headlines, telling his prosecutors (New York Times, 1/6/22) that they should seek “jail or prison time only for the most serious offenses—including murder, sexual assault and economic crimes involving vast sums of money.” He also told them to “avoid seeking jail time for…certain robberies and assaults, as well as gun possession” if “no other crimes are involved.”

Criminal justice reform advocates see this move as a victory. Calling it a “balanced approach,” Allen Roskoff, president of a Downtown Manhattan progressive LGBT Democratic club, said in a statement that the “LGBTQ community, especially Black and brown queer people, have suffered much of the brunt of over-policing for minor crimes,” as well as “under-protection from serious offenses.”

Bragg and his directives are part of a national movement of progressive DAs—including San Francisco’s Chesa Boudin and Philadelphia’s Larry Kushner—who seek alternatives to incarceration, a less-radical sister movement to prison abolitionism, reducing the carceral state’s role in the criminal justice system through electoral reformism. That’s why Rupert Murdoch’s biggest outlets, whose bread and butter is scaremongering reports on crime, have spent the beginning of 2022 on a full-scale attack against Bragg’s directives.

‘Decade of the criminal’ 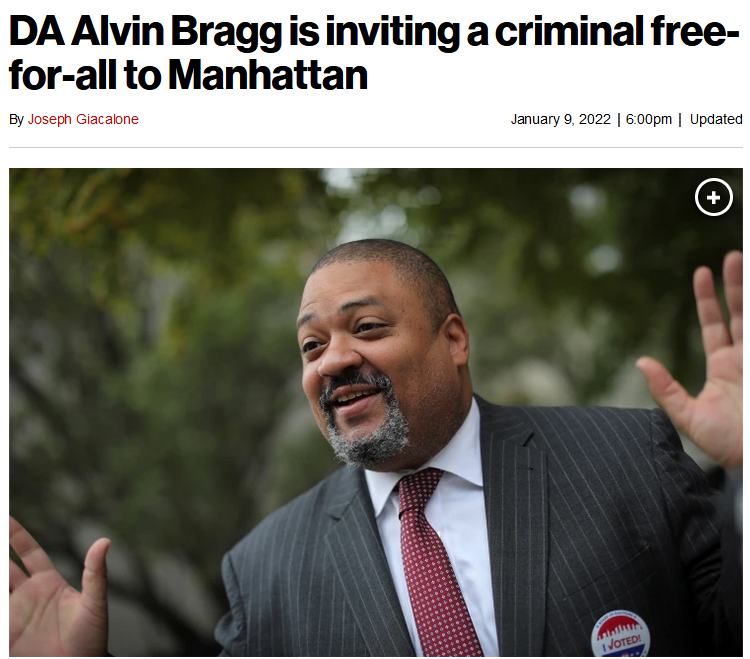 Joseph Giacalone (New York Post, 1/9/22) on Manhattan DA Alvin Bragg: “What he has done is invite all sorts of criminals from the outer boroughs to join in on the mayhem.”

Murdoch’s New York Post (1/9/22) said the move, along with bail reform and limiting the prosecution of children as adults, welcomed in “the decade of the criminal.” The Post highlighted negative comments about Bragg from big business (1/10/22), the twice-ousted former NYPD commissioner Bill Bratton (who blamed Bragg’s election on  Jewish billionaire George Soros—1/9/22), Republican gubernatorial wannabes (1/10/22) and the city’s sergeants union (1/8/22), which has a long history of corruption (ProPublica, 12/14/21) and racism (Daily News, 6/4/21). The paper (1/9/22) blasted Bragg for even responding to the criticism against him, stressing that the city’s four other DAs aren’t following Bragg’s path.

The Post’s most comical display of this theme was a major news story (1/12/22) about GOP gubernatorial candidate Andrew Giuliani and Guardian Angels founder (and recent Republican mayoral candidate) Curtis Sliwa’s petition to recall Bragg. The Post admits that “New York does not have a recall provision for voters to remove an elected official before their scheduled re-election,” and that the online petition had less than 2,000 signatures, giving the effort’s success a snowball’s chance in Hell. But the Post’s insistence on giving such a non-news story prime coverage is a testament to how big a priority Bragg is to the editors.

The Wall Street Journal (1/6/22), also Murdoch-owned, said Bragg was getting in the way of the tough-on-crime agenda of new NYC Mayor Eric Adams, a former NYPD captain, by “instructing prosecutors not to do their jobs.” Murdoch’s cable news outlet, Fox News, said he was “bringing disorder to the halls of justice” (1/5/22) and, like the Post, featured criticism from the police and business (1/6/22), and had former congressmember and federal prosecutor Trey Gowdy calling Bragg’s reform “dangerously stupid” (1/10/22).

Other targets of scorn 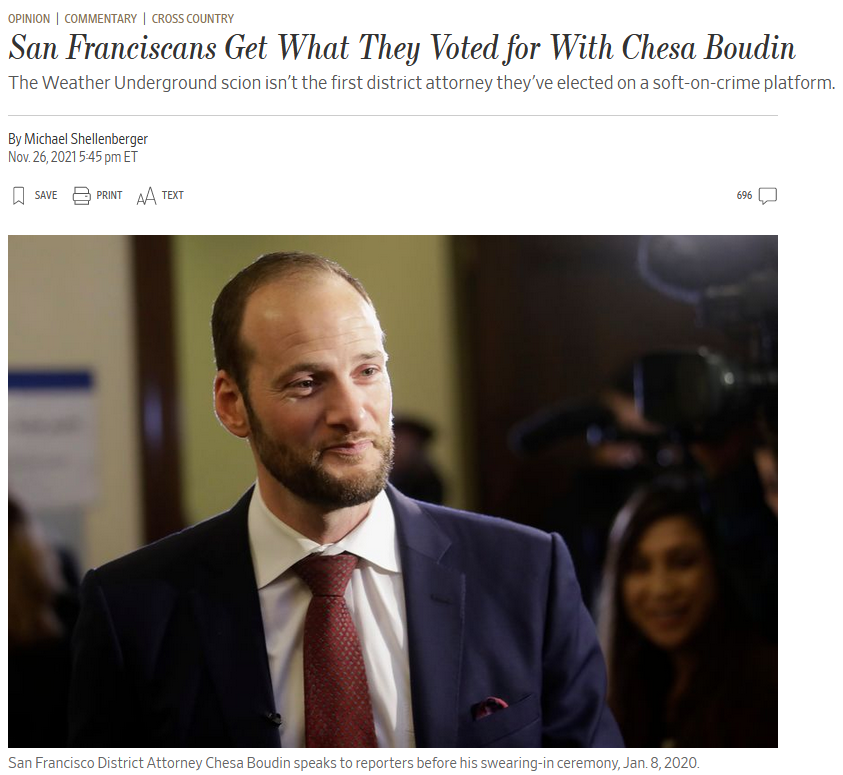 The firestorm from Murdoch-owned outlets might seem overblown for one memo from one of a city’s five chief prosecutors. But the Manhattan DA is seen as a national trendsetter, and his policy directive falls in line with both Boudin and Krasner, two DAs the Murdoch empire has also piled scorn upon.

The Journal (11/12/19) mocked “revolutionary San Francisco” for choosing Boudin, whom the editorial board saw as an advocate for urban decay. The paper (11/26/21) promoted the current recall campaign against him, a movement being bankrolled largely by a single Silicon Valley capitalist (San Francisco Chronicle, 3/25/21). The Journal (12/22/21) cited the December robbery of a man’s watch as summing up the holiday season in Krasner’s Philadelphia, and Fox News (12/7/21) sought out former Philadelphia Mayor Michael Nutter, a conservative Democrat who accused the “Soros-funded DA” of “white wokeness” and “white privilege.”

The right and its chief corporate media partner, Murdoch, have reason to be worried about public opinion these days, because Bragg, Boudin and Krasner are not alone. While democratic socialist Tiffany Cabán did not win the Democratic primary for Queens DA, she did come close (New York Times, 7/29/19), and thus has continued to be a so-called pro-crime punching bag for the New York Post (9/1/21, 10/23/21) now that she is a member of the city council.

And polling shows that while the “defund the police” movement is still in the minority (USA Today, 3/7/21), ideas about gradual reforms of the prison and criminal justice system are gaining popularity (Pew, 10/21/16; Gallup, 11/16/20). Last year, the Austin, Texas DA made waves for his tough policies—not against petty criminals, but against cops, as his office has “obtained indictments of five Austin police officers, two county deputies, an assistant county attorney and a sheriff, on charges including tampering with evidence and murder” (Washington Post, 12/17/21).

The Murdoch propaganda against reformist DAs these days usually draws on some familiar themes. One theme is the one-sided commentary from police brass, police unions and opposing political forces who are obligated to be critical of a serving Democrat, while the groups that brought these DAs to power and criminal justice reform advocates are absent. Another is the idea that Manhattan and San Francisco, some of the most expensive housing markets in the country and home to a vast concentration of wealth, have become dystopian crime dens.

But this doesn’t match the data. New York City’s own reporting shows that felony rates in every category have steadily decreased since 2000. In San Francisco, the felony rate for most categories has remained on a steady flat trajectory since 2010, the exception being larceny theft, which increased during the pandemic, but is still far below its 2017 peak.

Another troubling feature is the obsession with Soros; Nutter in the Fox piece and Bratton in the Post piece both invoke Soros as a funder, and thus responsible for DAs like Krasner and Bragg. Fox recently “deleted its social-media posts portraying [Soros] as a ‘puppet master’—a common antisemitic trope” (Daily Beast, 12/15/21). Even the pro-business Forbes (9/12/20) said, “There is a troubling and undeniable truth about the constant attacks on George Soros: antisemitism.” In short, Soros has become a modern day symbol of the Jewish cabal, like the Rothschild family once did. 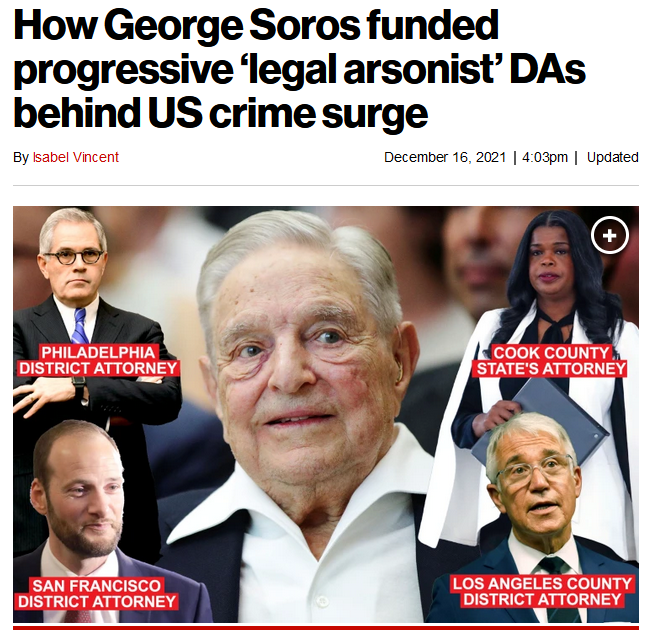 In context, these comments add to the shopworn narrative that a shadow Jewish banking cabal is conspiring to unravel white Christian society from the inside. During the Black Lives Matter uprising of the summer of 2020, some right-wing pro-police partisans went so far as saying Soros was monetarily fueling the unrest (Reuters, 9/29/20). Tying Soros to progressive prosecution is the logical next step in that narrative.

This isn’t a dog whistle, either; the Post (12/16/21) has been an air horn for the idea that this one Jewish industrialist is masterminding the revolution against American order through DA reform. This is a feature of the rest of the intellectual right, too. The Heritage Foundation’s Daily Signal (8/11/21) said of San Francisco: “much of the blame for the burgeoning crime problems lies at Boudin’s doorstep and his Soros-backed marching orders.” The Washington Examiner (9/1/21) lays it on thick, saying “Soros-backed DAs” and their policies “are destroying cities.”

Given that this is a midterm election year, and beyond that Donald Trump is signaling his attempt to win back the White House in 2024 (New York Times, 1/4/22), you can expect this hysteria to continue.