A good friend emailed me a couple weeks back and asked me why Donald Trump had recently spoke in Conroe, Texas.

I didn’t know. I hadn’t known Trump was even visiting Texas. I haven’t been watching the news a lot lately.

I emailed her back: “No. Probably a motivated gaggle of his fans there. It’s also, of course, a place where they burned a Black man at the stake.”

Hmmm, I mumbled to myself.

Then my mind began sifting through past research. Dates, places, faces, events — images. What year was that, I wondered.

I looked it up. And I looked up the 2020 presidential election results.

Conroe is in Montgomery County, north of Harris County, where Houston sits. In the election, Biden won Harris with 56% of the votes. Trump was victorious in Montgomery with 71%.

Was it a coincidence? Was my friend, who believes in “alignments,” especially in relation to causation, nudging me?

Was it happenstance that a community where an innocent young Black man named Joe Winters was burned at the stake — on the courthouse square, no less, for being in a relationship with a young white woman — might endorse, support, or host Donald J. Trump on his “Save America Tour”? Was it coincidence that Trump appeared in Conroe just a few months shy of the 100th anniversary of Winters’ hellish execution?

An association — even a strong one — is not a proof of causation, but research in terms of correlation was called for. For the uninitiated, I am the author of The 1910 Slocum Massacre: An Act of Genocide in East Texas (History Press 2014). The book was influential in some ways, including the placement of a historical marker commemorating the atrocity, but my follow-up, Black Holocaust: The Paris Horror and a Legacy of Texas Terror (Eakin Press 2015), hardly moved the dial at all. Even in the Black community.  Perhaps because it was too much, too dark, too terrible to consider, much less process. Michael Hurd, a native Houstonian and director of the Texas Black History Preservation Project (TBHPP) at the time who is currently serving as director of Prairie View A&M’s Texas Institute for the Preservation of History and Culture, which is digitally documenting 500 years of Black history in Texas, admitted as much. TBHPP lauded the Slocum Massacre account but was cold on the Black Holocaust book. Hurd told me he just couldn’t read it, that he couldn’t bear to read it.

My Black Holocaust book chronicled white terrorism and white monstrosity on a level and scale that’s still hard to contemplate, much less fully grasp the implications of. For Blacks or whites.

Nothing happens in a vacuum.

Trump was welcomed in Conroe the same way he would be welcomed in other Texas cities like Waco, Tyler, Paris, Sulphur Springs, Greenville, Hillsboro, Rockwall, Corsicana, or Sherman, and maybe Belton and Temple. The late 19th- or early 20th-century citizens of these communities all burned a Black man at the stake, a Black man who was usually innocent. And the citizens of Waco, Tyler, Paris, and Sulphur Springs burned more than one innocent Black man at the stake.

But I digress. I mentioned correlation.

In the 2020 presidential election, 52% of Texas voters voted for the incumbent. In Bell County, which includes Temple and Belton but also gets closer to progressive Travis County and Austin (where Trump received only 28% of the vote), Trump garnered 53% of the electorate. In Chip and Joanna Gaines County — I’m sorry, I mean McLennan County — whose county seat is Waco, Trump received 61% of the vote. In Navarro County (county seat Corsicana), Trump prevailed with 63% of the ballots. In Rockwall County (county seat Rockwall, just east of Dallas), voters — whose forebears, like Conroe’s, burned an innocent young Black man at the stake for courting a young white woman — went 68% for Trump. Montgomery County (again, county seat Conroe) — where an innocent Black man was burned at the stake 100 years ago this year — Trump got 71% of the vote. Grayson County (county seat Sherman) went for Trump-Pence 74%. Hopkins County (county seat Sulphur Springs) gave Trump the nod with 76% of ballots cast. Lamar County, where four Black men were burned at the stake in or near Paris, went for a MAGA sequel at a clip of 78%, and in Hill County (county seat Hillsboro) — where an intellectually disabled Black man was burned on the courthouse square in 1919 — constituents cast 80% of their ballots for Trump.

But in Cooke County (county seat Gainesville) — home of The Great Hanging — Trump also prevailed with almost 80% of the vote. And even Anderson County, where the 1910 Slocum Massacre started, managed a Red State-respectable 74% of the ballots. And then there’s Comanche County, where a Black man was lynched in 1886 and all the Black residents of the entire county were expelled, and the small town of De Leon infamously posted a sign that said, “Nigger, don’t let the sun go down on you in this town,” the Trump-Pence ticket was in like Flynn, boasting over 83% of the electorate.

Causation can be immediate, but it is often incremental, long-lasting, and repercussive. As of the 2000 Census, for one instance, the demographics of Comanche County included a Black population of only 0.44%. For another, historically racist counties not-so-coincidentally and almost invariably prefer Trump and/or conservative leadership, and, of course, rural communities with less diversity and less educational opportunities prefer Trump and/or conservative leadership.

Does anybody really believe that the fact that Texas conservatives find Critical Race Theory anathema is mere coincidence? Is the fact that Texas Republicans are trying to limit voting rights and political representation (via gerrymandering) for persons of color simply happenstance?

And the sad, sickening irony of it all is the image of Donald Trump standing at a Conroe podium and saying, “If I run, and if I win, we will treat those people from [the] January 6th [2021 insurrection] fairly … and if it requires pardons, we will give them pardons because they are being treated so unfairly.”

Wow. That’s exactly how the faithful conservatives of Conroe felt about the perpetrators of the ghastly execution of Joe Winters 100 years ago. None of them were even arrested or charged.

Their pigmentation was their pardon. 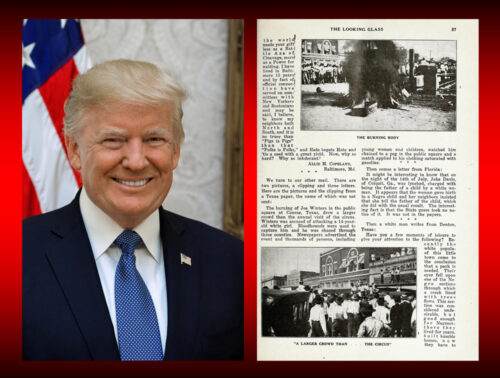 Examine the image (right) from page 37 of Vol. 29, No. 1 of the NAACP’Crisis magazine from 1922. That’s Joe Winters being burned at the stake in the upper right corner, with the details near the middle of the page. Then, look lower right. A letter from Denton, Texas . . . of Denton County . . . where Trump was also victorious with 53% of the vote. 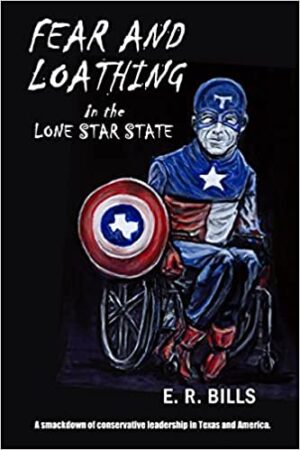 The post Pigmentation in Conroe first appeared on Dissident Voice.