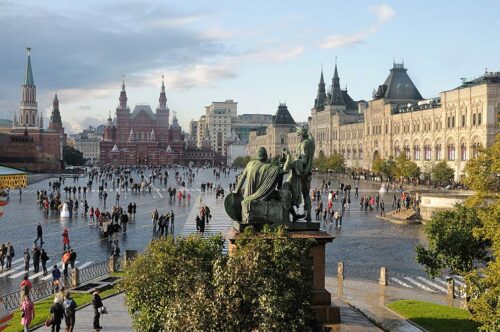 Note to our readers: These are letters from a comrade of ours who currently lives in Russia. English is not the first language of HCE so please be understanding. In order to preserve the integrity of these letters, we kept the original phrasing as best we could.

Thank you for your message and concern. My wife and I are passing through a difficult phase in our lives. After our second vaccination in December, we, for some reason or other, went through a period of being sick, myself in a light form while my wife gave me a scare. Anyway, that is behind us.  Barbara, I thought that in my late years, being 80 years old now, we would settle down and I would take good care of my wife, go for long walks in the forest-parks of Moscow. Fate, however, had other plans for us, and here we are in the midst of another war and sanctions surrounded by nations led by clowns, comedians, lunatics, and obsessed madmen. Allow me to give you my opinion on a number of issues.

The dependence of Europe on Russian natural gas

The US tried all the possible tricks to stop the Nord Stream 2 gas pipeline project. Generally, they want this energy market for US companies, in spite if the fact that gas will be in liquid form and transported by ships. The port that has to receive the liquid gas must have a very expensive plant. Besides the market factor there is the geopolitical factor of having Europe depending on the US for their energy. Russia has always delivered through thick and thin and always will. I wonder whether the US and their companies will be just as trustworthy.

Chernobyl, the place where the terrible catastrophe happened, is located in the Ukraine.  Zelensky declared that he would consider making an atom bomb if not given the security guarantees that he was asking for from Europe and the US on the second day of the war. He had in mind using materials from the damaged reactor and make a “dirty bomb”. I think that was the last straw. Russian special troops immediately moved to occupy Chernobyl. Thank goodness not a single shot was fired as the Ukrainian troops laid down their arms. The 8 years that the people of Donbas served as a shooting gallery for the Ukrainian nationalists and fascists has finally come to an end. Chernobyl at the present is being patrolled by joint Russian – Ukrainian units. There is a huge Sarcophagi covering the damaged reactor (if you see a clip or pictures, it is so ominous and awe striking. It makes you shiver).

The Mood of the Russian people

Now let me discuss the mood of the Russian people who I see on the street, the people who I talk to, and what I read and watch on local tv. Russians differ in their assessment of the war. By far the broadest section supports their president, and especially their armed forces. They are mainly working class, solid people, nationalists, and the majority of the left including CPRF.

Since the nomination of Hillary Clinton and the Democrats’ obsession with Russia’s and Trump’s supposed ties with them, these Democrats have played a terrible role in pushing the Russian people more to the right. Anything that is seen as part of the Democrats, like BLM, MeToo, or LGBT is derided here. White supremacy is on the rise. I have tried on many occasions to explain, for example, BLM. The conversation usually begins with “I don’t take a knee before a N.” So, I have to explain the rules of US football, who Colin Kaepernick is and the conditions of his kneeling during the national anthem. Presenting the subtleties of this is not easy when Russians are already riled up. The Communist Party in Ukraine was prohibited many years ago and in this void came nationalism and religion. Both cards were used to divide the Russians and the Ukrainians. Russia has officially declared that the aim of their operation in the Ukraine is demilitarization and denazification.

Then there is a loud minority of very young people guided by NGOs financed by the West, part of the humanitarian intellectuals, artists, and actors. They are against their army and its operations in the Ukraine. The Russian Government has started taking measures against openly anti-Russian channels like Echo Moscow and Dozhd/Rain.

The situation in Russia is characterized by a retreat of the liberals and pro-western opposition. The polls show that the support for the president is 75% as of today, March 11. The street is calm, my apartment is near a university and campus and I see hundreds of young people going about their studies. I see people shopping, and I go shopping too. No panic, no rush. If the West thinks by imposing draconian sanctions it will change the mood of the people, then it is right but exactly in the opposite direction, instead of the critical and quite often satiric attitude towards the authorities. In fact, they are consolidating and supporting it.  A new world is being born and Russia with all her faults and problems is the midwife and godmother. I will stop here but I have lot more to say. Please let us continue with the dialogue

With affection and respect

Before writing on my observations on religious hostilities, allow me to make some notes on what the Ukraine fascist and ultra-national ideology is based on and where it comes from.  I will not go too far back in history but pick it up after WW2.

Nazi collaborators and their role:

The Ukrainian government after the disintegration of the Soviet Union till today, with V. Zelensky have tried their best to whitewash and portray these collaborators as heroes and founders of the Ukraine State. I have chosen to describe Stepan Bandera, who probably is the most popular among the fascists who march with his portrait. Kindly find below my translation from Russian about Bandera. I have taken extracts from an article and what seemed to me important that would provide an idea of the basis for fascism.

The History of S. Bandera and the rehabilitation of fascism in Ukraine including by V. Zelensky

Bandera Stepan Andreevich was a leader and organizer of the Ukrainian national movement in Western Ukraine and considered a terrorist. He was a member of the Ukrainian military organization (from 1928) and the Organization of the Ukraine nationalists (OUN) from 1929, and organizer of a series of terrorist acts. Bandera was condemned by the Polish authorities to life in prison and his memory has not been rehabilitated till now. He was considered a criminal.

Stepan Bandera and his supporters sought “independence” through violence, revolution, and genocide. The theoretical activity of the Bandera supporters started in Poland, their most notorious terror cases was the killing of government personalities Soviet Cousul Andre Mailov in 1933. In 1934 he participated in the organization in the killing of the Polish minister of interior Bronislav Peratski and the director of the Ukraine academic gymnasium Ivan Babi. He organized an explosion in the offices of the “Pratsia” newspaper.

In the summer of 1934, polish authorities arrested Bandera. On January 13, 1936, Stepan Bandera and his accomplices were sentenced to death for the murder of Peratski. Then the death penalty was changed to life in prison, which he spent till 1939 in Polish prisons. After the Nazis occupied Poland in 1939 he was freed.

During the German occupation, Bandera and his supporters cooperated with Hitler’s Germany and they terrorized the population. Poles and Jews were killed most of all. Immediately after the capture of Lvov the Bander, supporters jointly carried out mass pogroms.

In our days in Ukraine one of the dates that is commemorated as the “liberation movement for the independence of Ukraine” is 30 June 1941, when the Bandera supporters in Lvov declared the restoration of the Ukrainian state. In the “Act of the declaration of the Ukraine state”, there was the following point:

“The newly created Ukraine state will closely cooperate with the great National –Socialist Germany under the leadership of its leader Adolf Hitler, who is creating a new order in Europe the world and helps Ukraine to free itself from the Moscow occupation”

After the war, Stepan Bandera lived in Munich and worked for the British security services. A Soviet agent executed him in 1959.

The Ukraine authorities and V. Zelensky personally make a hero out of Bandera. Monuments are erected and marches take place in his honor in which the participants call for the killing of Russians. The original text of the link above contains pictures of the fascists in Ukraine during their marches, as well as a document in Ukrainian and its Russian translation, where Bandera and his supporters glorify Hitler and fawn over the Nazis, I recommend taking a look at it.

This is the ideology of a minority that has managed, with the financing and support of the West, to create an atmosphere of hate and terror, Russophobia, and xenophobia. The forces that could have stood up to them were either banned (the communists), or brainwashed and tempted by the dream of EU and NATO.

Fascist and nationalistic ideology in Ukraine is not a phenomenon that is purely local. it is part of the populist ultra-right ideas that have swept Europe and the US. These include the appearance of fascist movements that rode on the wave of capitalist austerity instability, lack of steady employment, to scapegoating refugees for the lack of capitalist prosperity.

There is another card that has been played by the west, the card of religion. Little has been said in the western media about this, but the fact that religion started to play a big role in the life of the people of the countries who were living in what was the  Soviet Union is undeniable. People of various classes and occupations became religious, some even fanatics.

Very briefly, historically in Ukraine there were two main religious tendencies. Ukraine Greek Orthodox in the East and Ukraine Greek Catholic in the West. Relations are not the best. The Ukraine Greek Catholic Church actively cooperated with Nazi Germany during its occupation of Ukraine. Moreover, after the disintegration of the Soviet Union, the Greek Orthodox Church in Ukraine from being part of the Moscow Patriarchy split into different parts mainly along nationalistic lines. This hatred was built not only on theological differences, but on property, including churches and land.

I do not know whether you have heard Sergei Lavrov’s interview. There were the following words that made an impression on me:

“As for our economic problems, we will deal with them. We have coped with difficulties at all stages of our history when these difficulties arose. But this time, I assure you, we will get out of this crisis with a completely healthy psychology and a healthy consciousness. We will have no illusions about the reliability of the west as a partner. We will not have any illusions that the West, when it talks about its values, does not really believe in its promises and spells, and we will have no illusions that the West is capable of betrayal at any moment. It will betray anyone and betray its own values.” TASS reports Lavrov’s words. (My translation)

With affection and respect

This content originally appeared on Dissident Voice and was authored by HCE.