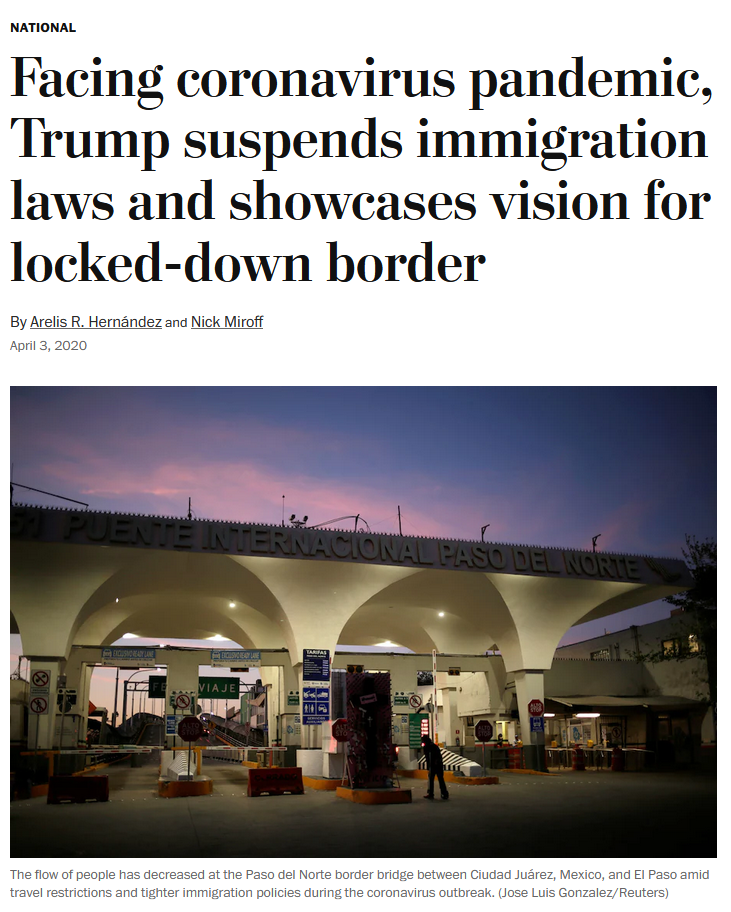 The Washington Post (4/3/20) reported that Trump “shelved safeguards intended to protect trafficking victims and persecuted groups” and “created a pilot test for the impact of the more draconian measures he has long advocated.”

President Trump has used emergency powers during the coronavirus pandemic to implement the kind of strict enforcement regime at the US southern border he has long wanted, suspending laws that protect minors and asylum seekers.

Almost exactly two years later, the same paper (3/24/22), including one of the same authors of the 2020 article, reported on the coming end of the same policy restrictions with this headline: “Biden Faces Influx of Migrants at the Border Amid Calls to Lift Limits That Aided Expulsions.” Here the lead said that increasing numbers of migrants and refugees at the border were “stirring fears that the Biden administration will face an even larger influx if it lifts pandemic restrictions next week.” An end to Title 42 deportations was announced the following week, to go into effect May 23.

It’s hard to even recognize it as the same policy in these two pieces.

I looked at the Washington Post’s coverage of Title 42—from its introduction to its effects, calls for its end as well as for its continuation, to its announced end—to track how the paper’s reporting changed from the Trump administration to the Biden administration. The differences, which were stark and consistent, reveal something about how the Post views the two administrations, but also a lot about how they analyze —or don’t—US immigration policy. 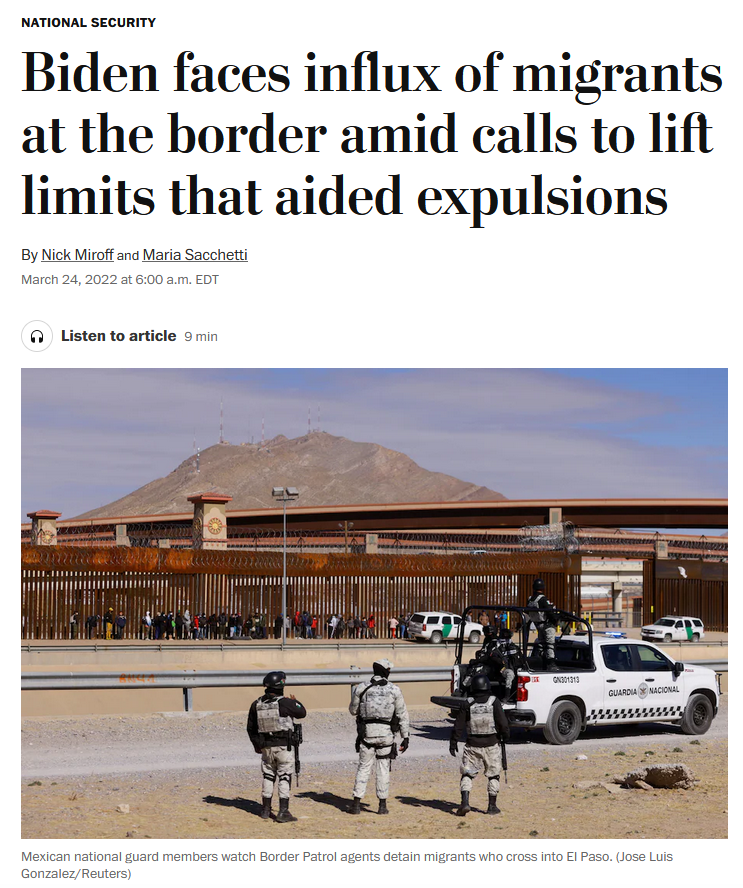 Two years later, the Post (3/24/22) said the number of people crossing the border was “stirring fears that the Biden administration will face an even larger influx if it lifts pandemic restrictions.”

Under the Trump administration, the Washington Post consistently framed Title 42 as a pretext for severe restrictions on immigration, rather than presenting it at face value as a legitimate public health measure. The April 3, 2020, article described the use of Title 42 as “a pilot test for the impact of the more draconian measures [Trump] has long advocated.” An April 21 Post piece spoke of “the pandemic as the reasoning,” not the reason, for the restrictions. On May 13, it attributed to “some experts” the belief that Title 42 was “an excuse to implement the kind of blanket closures President Trump has sought for years.”

Moreover, the 2020 coverage regularly included damning evidence supporting the view that the pandemic was merely a pretext for shutting the border, namely the fact that Covid was much worse in the US than anywhere else, and in particular, much worse than in Mexico and Central America. “Mexico has confirmed fewer than 1,500 positive cases of the virus so far, less than 1% of the number in the United States,” one report (4/3/20) noted. “Though Trump administration officials have tried to emphasize the external threat of the virus, the United States continues to have the worst outbreak in the world,” another (5/7/20) explained. “Despite the administration’s claims of an external threat, the United States remains the world’s worst coronavirus hot spot, by far,” the Post (5/13/20) told readers.

By contrast, in 2021 and 2022, with a different occupant in the White House, Title 42 restrictions were generally contextualized as a response to the pandemic.

In a July 2021 piece (7/28/21) headlined “Along Mexico Border, Covid Spike and More Migrant Families Stall Plans to End Title 42 Expulsions,” the claim that public health concerns were driving decisions about whether/when to end Title 42 is taken at face value. The piece goes so far as to relay a story from local Joya, Texas, police about a migrant mother “sneezing and coughing” walking into a fast-food restaurant, where the USians promptly called the police on the family. “This is day after day. We get hundreds of people, and they could all be sick,” the cop is quoted.

On the day this article ran, Mexico had 13,911 new Covid cases while the US logged 84,961—more than twice as many even on a per capita basis. These numbers, however, were missing from the account.

Similarly, in the March 24, 2022, piece, the Washington Post framed the upcoming decision on whether to continue or end Title 42 restrictions as a public health decision. If the administration chose to continue them, it noted,

it would not be the first time the Biden administration…opted to renew them as another wave of infection looms. The emergence of the omicron variant of the coronavirus last winter quashed speculation that an end to Title 42 was imminent.

Danger to migrants and refugees 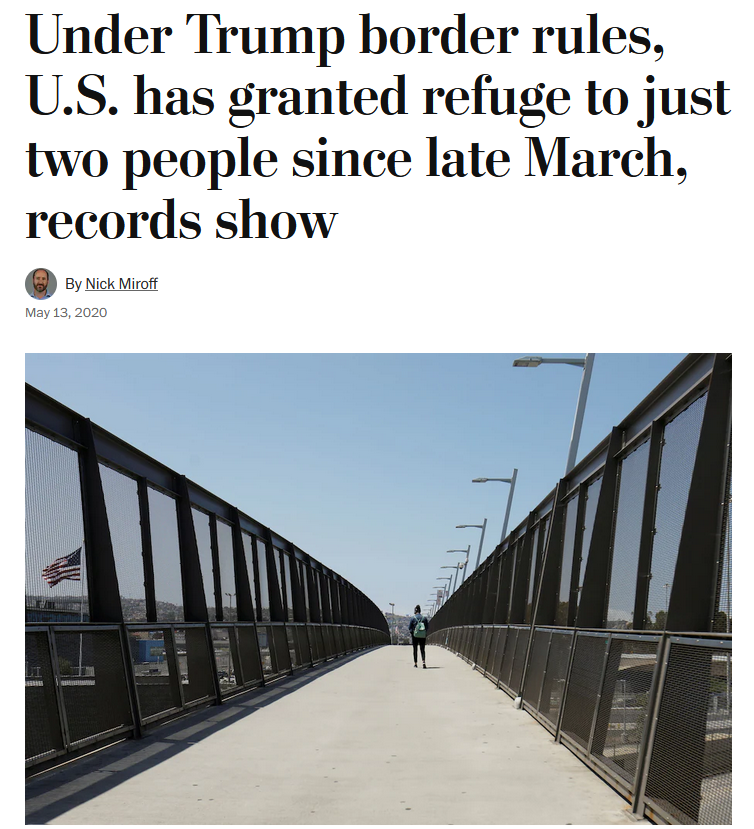 The Post (5/13/20) noted that the Trump administration “has yet to publish statistics showing the impact of the measures on the thousands of migrants who arrive in the United States each year as they flee religious, political or ethnic persecution, gang violence or other urgent threats.”

In April 2020, the Washington Post (4/3/20) reported that Title 42 “bypassed court-ordered due process protections for minors, asylum seekers and others,” and said that Trump “has shelved safeguards intended to protect trafficking victims and persecuted groups.” That May (5/13/20), it revealed:

The Trump administration’s emergency coronavirus restrictions have shut the US immigration system so tight that since March 21 just two people seeking humanitarian protection at the southern border have been allowed to stay.

Such blunt statements about the devastating human rights impact of Title 42 were absent from the coverage in 2021 and 2022, however. In their place, the paper sometimes attributed concerns about dangers to migrants to critics of the policy.  “Advocates for immigrants have repeatedly sued over the policy, saying it endangers migrants and violates federal law,” it reported in March  2022 (“Democratic Lawmakers, Civil Liberties Groups Demand End to Title 42 Border Expulsions,” 3/10/22). It mentioned that a federal appeals court had days earlier ordered the Biden administration to stop sending families to countries where they face persecution, “citing reports that migrants have been raped, tortured and killed after being expelled.”

In the March 24 article, objective dangers were again couched as partisan opinions: “Democrats and immigrant advocates…say that the order is denying victims of persecution the right to seek asylum under US law.” On March 30, it was “activists” who “argue” that Title 42 is “an inhumane way to treat people seeking refuge.”

I dunno—rape, torture and murder seem objectively inhumane to me. 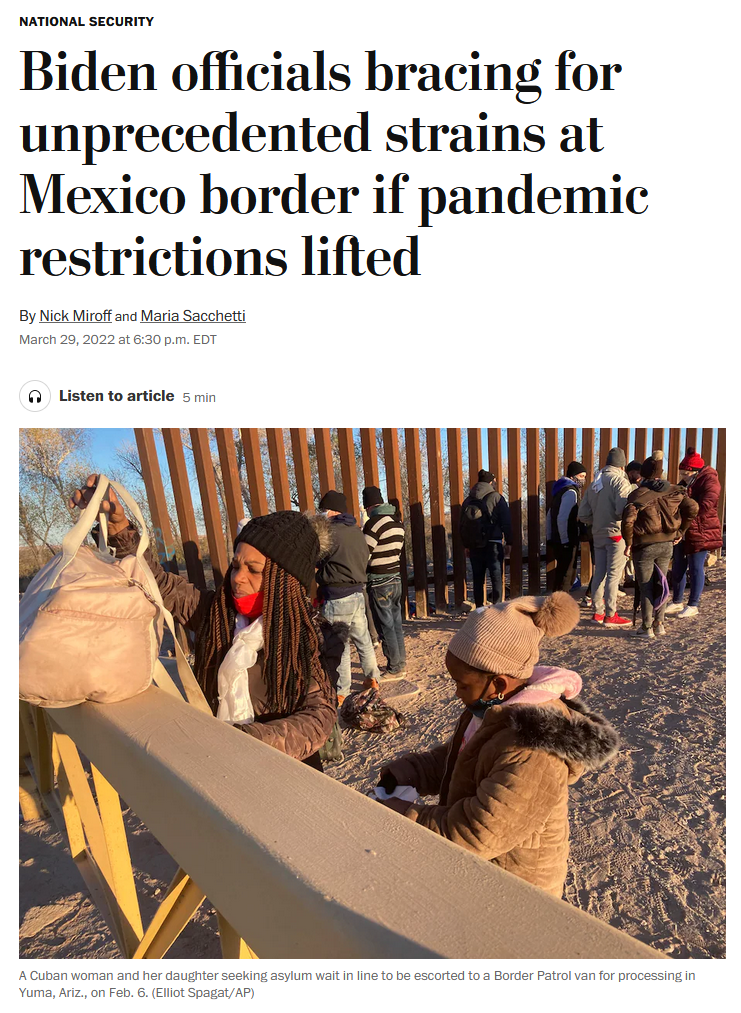 In 2020, the Washington Post (5/13/20) was concerned that the border was shut “so tight” by Title 42 that only two people had gotten humanitarian protection. But in 2022 (3/30/22), it worried “lifting the policy could swell the border with migrants who view it as easier to come to the United States and claim asylum.” Apparently there’s such a thing as too much humanitarian protection.

Indeed, the biggest theme of the Biden-era coverage of Title 42 has been the perception that ending the restrictions would result in too many people seeking asylum or otherwise trying to immigrate to the US. “The quantity of border-crossers is now so large that if Title 42 were lifted, agents would not be able to safely detain migrants, especially if large numbers seek asylum,” “analysts” told the Post (7/28/21). In “Biden Officials Bracing for Unprecedented Strains at Mexico Border if Pandemic Restrictions Lifted,” the Post (3/29/22) talked about “a possible post–Title 42 border rush.”

“Biden officials insist the CDC renewal decision is driven by public health,” the March 24 article noted, “but in private, border authorities and others say it has become a management tool to cope with the historic migration pressures they have faced since early last year.” Under Trump, Title 42 was a pretext to implement “draconian” immigration policies, but under Biden it’s a “management tool” to deal with a legitimate problem.

Barely unspoken is that the Washington Post now considers it a necessary management tool to stem the “influx” of people migrating to the US. Thus 2020’s concern over “shelved safeguards” has dissipated, and in its place we have justifications for continuing the very same policy that two years ago was viewed as extreme. 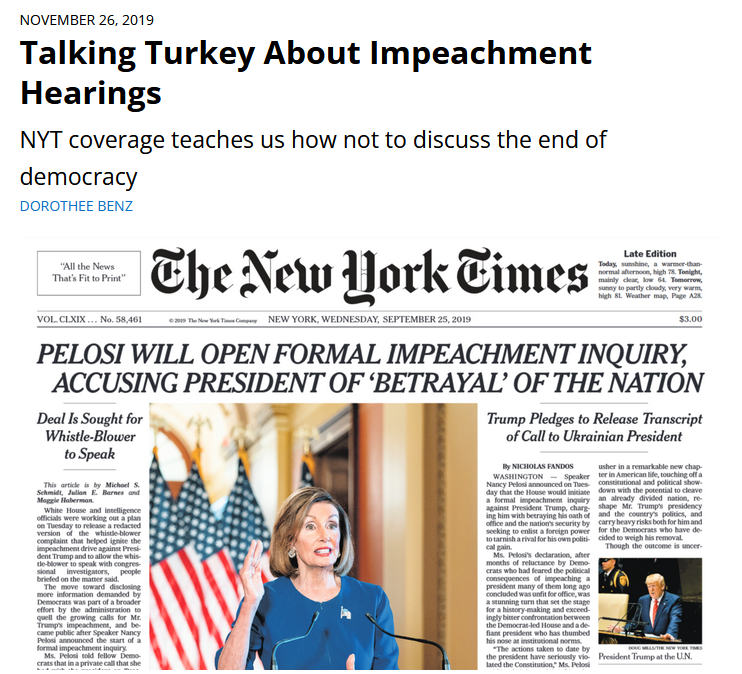 “Because of the myth of objective journalism, reporters’ and editors’ views of how Trump is a bad president or a terrible human being have no legitimized expression” (FAIR.org, 11/26/19).

As I’ve argued earlier (FAIR.org, 11/26/19), I believe that most of the neoliberal media did dislike Trump and that bias influenced their coverage of the administration. The Washington Post—with its pretension to be the defender of democracy (“democracy dies in darkness”)—was fine with implying that Trump’s policies were beyond the pale, but is less inclined to paint the same policies the same way under the return-to-normal administration of Biden. What they disliked about Trump was not really his policies, but the fact that he said the quiet part out loud—in the case of immigration, the overt racism,  xenophobia and undisguised cruelty—and his unpredictability. With Biden, there is a return to a predictable bipartisan range of politics and policy.

And equally predictably, the Post has returned to its habit of legitimizing and stabilizing the US presidency, and framing immigration policy as part of a chess match between Democrats and Republicans.

Underlying the reflex to defend the administration is an unexamined bias in favor of our racist immigration and border policies, policies that have overall been the same before, during and after the Trump administration. As border crossings increased in the second year of the pandemic, Republicans, Democrats and the Washington Post are all in agreement that shelving human rights concerns is the price of keeping unwanted refugees and migrants out of the US.

You can send a message to the Washington Post at letters@washpost.com, or via Twitter @washingtonpost. Please remember that respectful communication is the most effective. Feel free to leave a copy of your message in the comments thread here.

The post Trump’s Asylum Ban Hasn’t Disappeared—but Media Outrage Over It Has appeared first on FAIR.

This content originally appeared on FAIR and was authored by Dorothee Benz.