After the 2014 coup and eight years of fighting between the Ukrainian military and Russian-backed separatists, history has once again exploded and returned to the stage in Ukraine. As Westerners with governments who act blatantly hostile and belligerent to Russia, we should ask: was Russia provoked, and if so, how?

It is important to question how and why this conflict started. There is a saying about Russia many are familiar with: “Don’t poke the bear.” Well, the US and NATO have been poking the bear for 30 odd years since the downfall of the USSR. The West has adopted an absurd, ahistorical stance towards Russia, continuing to expand NATO, all the while knowing this would enflame tensions and demand a response.

The first Russian response in Ukraine was in 2014, after the US-backed right-wing coup which kicked Viktor Yanukovych out of power. I covered it extensively here. Many in Eastern Ukraine and Crimea obviously are ethnic Russians, speak Russian, have family in Russia, and do business with Russia. While some of these same people still may favor a strong and independent Ukraine, clearly many are sympathetic to the formation of an independent Donetsk and Luhansk; and the vast majority in the Donbas has no interest in fighting their eastern neighbor. Many in Ukraine are rightly worried about schools no longer teaching the Russian language, about the neo-Nazi Azov Battalion, and about the Right Sector and Svoboda parties infiltrating Ukrainian politics.  The past eight years have seen thousands killed in the Donbas region. Compared to how the US or another mid-level world power would react, Russia had shown immense restraint.

Let’s not pretend like they weren’t legitimate concerns when looking from Russia’s national security perspective, which the US is well aware of. The US and NATO have been expanding its military and security apparatus eastward for thirty years, threatening Russia’s security, trade and economic relations, and its sphere of influence. By breaking its promise not to expand, NATO encroached right up to Russia’s borders in the Baltic nations. By invading Iraq and Afghanistan, orchestrating the 2014 coup in Ukraine, along with overthrowing governments and meddling in many other nations, the US blatantly and repeatedly broke international law and any semblance of world order. This undoubtedly led the entire world security architecture to disincentivize international cooperation and gave stronger nations the convenient excuse to take matters into their own hands.

The US and Western Europe continued to “poke the bear” even after Russia countered Western hegemony in Georgia in 2008 and by retaking Crimea in 2014. The US, knowing full well that Russia’s economic and geostrategic vulnerabilities could be exploited to enhance the power of NATO and the EU, has long had its eyes on Ukraine becoming integrated into the West. In short, while US pundits today claim Putin sees the conflict as a “zero-sum game”, it is blatant projection, as the US and NATO have been playing the same realpolitik chessboard to enhance their geopolitical control over Eastern Europe.

Even mainstream political scientists understand this: John Mearsheimer, otherwise a respected, establishment liberal professor, has repeatedly blamed the US and NATO as being primarily responsible for the war in Ukraine, taking heat from both sides of the warmongering Washington consensus.

One has to consider a hypothetical converse situation. If Russia or any other great power was financially and militarily supporting Canada to quell pro-US separatists in Alberta, and the Canadian government sided with the Russians, with thousands of innocent US and Canadian citizens killed in the process, would the US hesitate to invade and install a pro-US government? Not for a second. The US would consider this a threat to national security. This is the basis for the Monroe Doctrine, in which the US considers all of North, Central, and South America its own backyard; any other perceived threat will be ruthlessly invaded, destabilized, or destroyed, just as has occurred in Nicaragua, Chile, and Guatemala, just to name a few instances.

Even warmongering, imperial architects like George Keenan and Henry Kissinger understood that there was no way Russia would allow for Ukraine to be allied with the West. Even though both figures were ruthless, cynical war criminals, they at least understood that other great powers have interests which differ from ours and their economic and geostrategic imperatives which must be taken into account. That basic level of understanding of realpolitik and analysis of material conditions as well as competition between world powers does not seem to exist in US foreign policy anymore.

It should be obvious that we’ve entered the imperial overreach stage. The US meddled to try and cajole Ukraine into the EU and NATO, and got its shit wrecked. We fucked around and now we’re finding out.

Before 2014 Russia would probably have accepted a neutral Ukraine, but no longer. The past eight years have shown that Ukraine would rather kill its own people than negotiate. Ukraine used neo-Nazi forces for eight years and still is in the current conflict, allied to their official National Guard. Ukraine was assisted by the CIA in Eastern Ukraine to help kill separatists. British and US special forces are currently in Ukraine assisting its military. Before the war started, Ukraine was verging on becoming a failed state, Zelensky was widely despised, and the standard of living was falling precipitously for the average Ukrainian.

This does not justify Russia’s response. It does, however, reveal that great powers will react to continuing pressure and low-level war on their borders when it suits them. It is basic common sense; stronger authoritarian nations (the US being exhibit A) pursue their interests at the expense of weaker ones when they can get away with it, and also overreact or become irrational when threatened. If Russia and Putin has become increasingly paranoid and isolated, what were the conditions that led to this new state of affairs?

We have to return to the ahistorical framework US power projects. These were exemplified best in the 1990s in two works: Francis Fukuyama’s The End of History and Thomas Friedman’s The World is Flat. Cresting the wave of the fall of the Soviet Union and unipolar US hegemony, these authors codified imperial hubris of late 20th century America, claiming that only liberal representative democracies guided only by capitalist economic structures would expand worldwide and a new era of peace, globalization and cooperation would begin; a “New World Order”, as it were. All this would be implicitly supported by a globe-spanning military colossus, an imperial pax Americana. Autocracies and other authoritarian regimes would not be able to maintain influence as the “free market” expanded to every corner of the planet; and democratic, capitalistic nations would not go to war with each other, this was referred to by Friedman as the “Golden Arches” theory of foreign policy: no two countries with a McDonald’s, and hence, a global capitalist political structure, would ever fight each other again.

Looking back today, it’s obvious how facile and myopic this view was. Great powers fight over more than ideology: natural resources, security assurances, and the material needs determine how nations compete and jostle for status and hegemony. In hindsight, and without the hegemonic distorting lens of pro-Western propaganda, it’s easy to see that Russia has felt threatened by Western Europe and the USA for generations.

Ultimately, the US will be content in the near future to “fight to the last Ukrainian.” The domestic US and Western European populations need a new distraction from an economy with skyrocketing inflation and a looming recession. A proxy war against Russia suits Western elites just fine, even though it is clear that Biden, Johnson, Macron, and Scholz have no idea how to proceed. Western nations have little leverage or ability to maneuver in this war; US diplomats especially have no interest in navigating the foreign policy repercussions precisely because they are so insulated from the consequences.

The establishment needs a scapegoat for the worsening economic situation in Europe and the USA, and the coming recession will be blamed on Russian destabilization of global markets. The monpoly media has conveniently ignored the eight previous years of civil war in Ukraine, a situation that would not be tolerated by any other global power. The narrative shift to Russia as the next boogeyman was very swift, precisely because Washington has no one else to blame for the disastrous collapse of the world economy led by a failing capitalist model. The West was desperate to find a scapegoat and now it has one. The faltering of international norms and relations due to exploitative and reactionary foreign policy decisions of the West likewise exposed cracks in the foundation of the system with no fix in sight. Only a diplomatic solution can bring an end to this war, and at present, US leadership can at best be described as being out to lunch. With no clear plan or desire to minimize the human suffering in Ukraine, the imperial order continues to stumble along due to its own hubris and overreach, blind to the lessons of history. 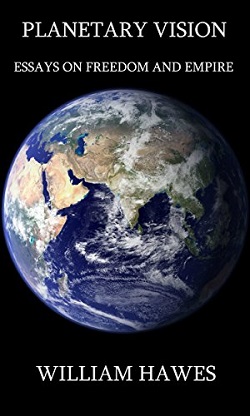 This content originally appeared on Dissident Voice and was authored by William Hawes.