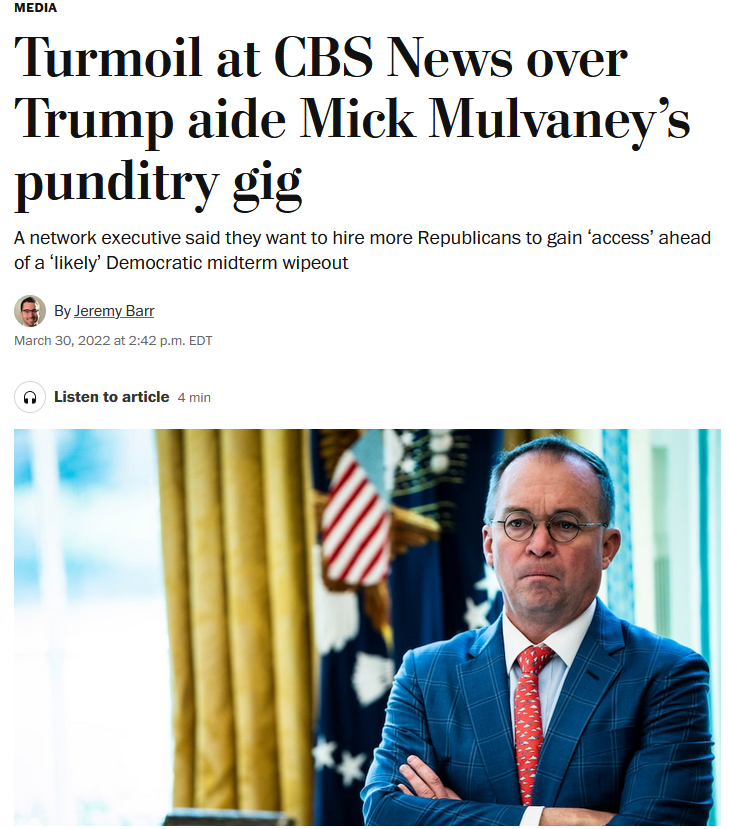 The Washington Post (3/30/22) reported that CBS‘s hiring of former Trump aide Mick Mulvaney was “drawing backlash within the company because of his history of bashing the press and promoting the former president’s fact-free claims.”

CBS News hiring former Trump aide Mick Mulvaney speaks volumes about systemic problems in our media. Mulvaney notoriously defended various Trump chicaneries—including withholding military aid to Ukraine in an attempt to extort its president for political gain—and no democracy worthy of the name should give him a prominent media platform. But once again, commercial values trumped democratic principles in mainstream news media.

A recording of a staff meeting captured CBS News co-president Neeraj Khemlani explaining how the hiring decision was based on maintaining “access” to Republican elites (Washington Post, 3/30/22). He told the staff of CBS‘s morning show:

Being able to make sure that we are getting access to both sides of the aisle is a priority because we know the Republicans are going to take over, most likely, in the midterms.

Such media malpractice recalls the now-disgraced former CBS CEO Les Moonves (Extra!, 4/16) enthusing in 2016 how the Trump campaign “might not be good for America, but it’s damn good for CBS.”

the news media’s blind and relentless pandering to the outdated notion that both sides of the aisle are pretty much equal…just with different governing philosophies. 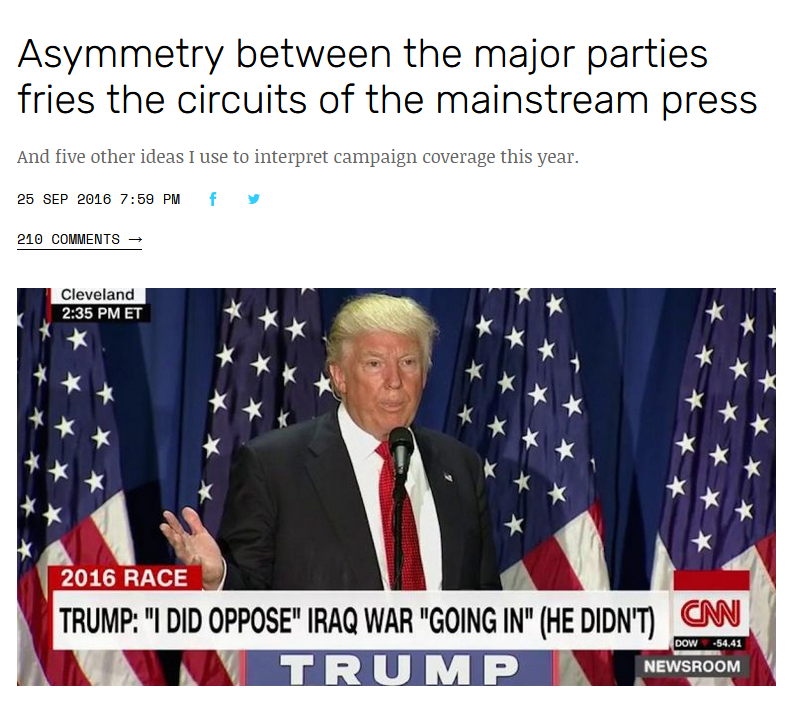 The tendency to rely on “he said/she said” false equivalence has long stained professional news practices—simultaneously presenting a veneer of neutrality while also accentuating partisan conflict. But this practice is especially egregious now that the Republican Party has become an openly anti-democratic force, often supporting the “Big Lie” that the 2020 election was stolen, and refusing to properly condemn the January 6 insurrection and broader efforts to overturn election results—in some cases even encouraging them. The recent revelation that Sen. Mike Lee supported such attempts—a coup by any other name—barely registered with major television media.

News outlets have increasingly normalized this fascistic threat, at least partly because to call it out and condemn it—as news outlets would in any functioning democracy—counters a key cornerstone in the commercial media model. “Bothsidesism” is arguably one of the worst symptoms of our media’s structural pathologies. Fixating on access to official sources, this practice typically indexes media coverage to the parameters of elite opinion, and naturalizes status quo power relationships instead of challenging them.

To confront the GOP’s neofascist turn would amount to a departure that, in the words of media critic Jay Rosen (PressThink, 9/25/16), “fries the circuits of the mainstream press.” A profit-driven media so closely wedded to the political elites within a two-party system could never dare alienate a large swathe of Americans who ensure the ratings that advertisers covet. 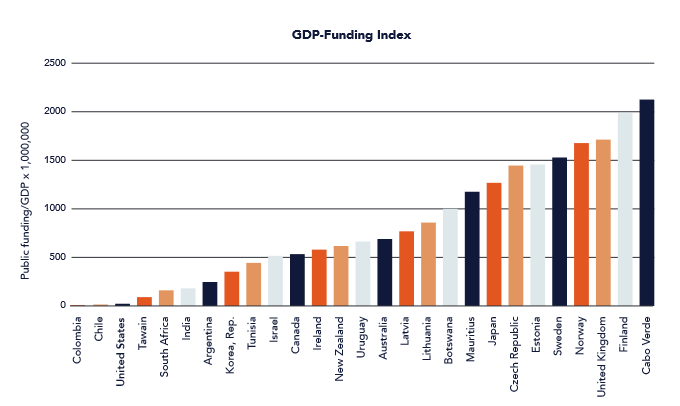 The United States government spends 0.002% of its GDP on public media—vastly less than almost all other wealthy countries.

As former MSNBC producer Ariana Pekary (8/3/20) has publicly written, commercial media’s obsession with ratings warps and degrades media coverage. She described how it’s “practically baked into the editorial process,” but remains “taboo to discuss how the ratings scheme distorts content.”

Yet the damage is all around us. Ratings-driven news outlets focus more on facile coverage of pressing social issues—or provide no coverage at all—to privilege entertainment over information. This commercial logic drives media to emphasize dramatic and sensational storylines that keep our eyes glued to various screens, from online clickbait to cable television’s barking heads.

Several years ago, Chris Hayes made a revealing comment on Twitter (7/24/18) to this effect when he acknowledged that covering climate change is a “palpable ratings killer. So the incentives are not great”—which begs the observation that we must change the incentives driving our news media.

But why are commercial media so ratings-obsessed? It isn’t just a popularity contest, but rather stems from the core business model that undergirds the American media system: capturing our attention to deliver to advertisers. In the US, most commercial media organizations—from cable news to social media—rely on revenues from delivering eyes and ears to advertisers.

Even for many newspapers, it’s long been about an 80/20 split (80% from advertisers/20% from reader-support like subscriptions, though this ratio is changing with the collapse of ad revenue). At the same time, the US is almost literally off the chart compared to democracies around the globe for how little it allocates towards public media. 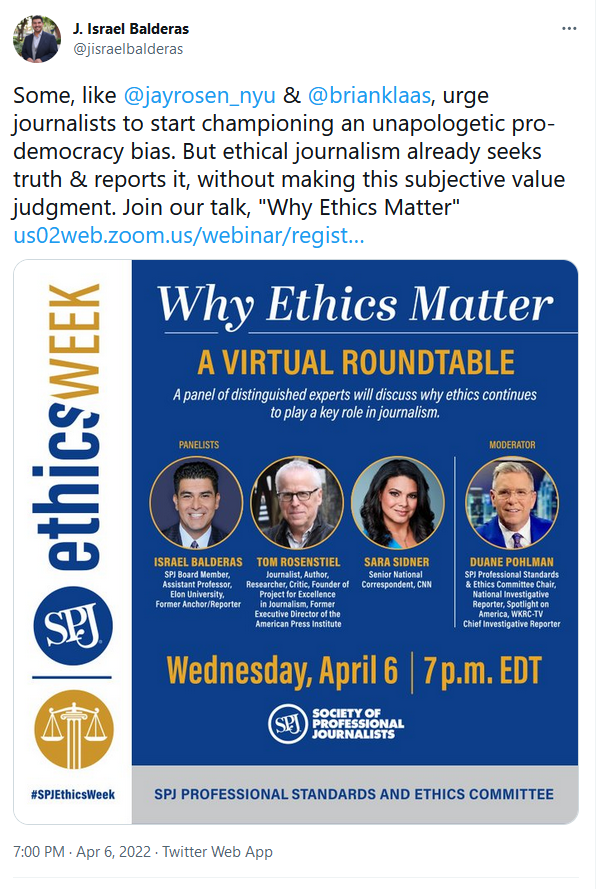 Is having democracy better than not having democracy? “Ethical journalism” doesn’t need to make this “subjective value judgment,” argues SPJ board member J. Israel Balderas (Twitter, 4/6/22).

Progressives often attribute mainstream media’s failings to its corporate ownership. While news media’s allegiance to corporate power deserves ruthless criticism, it’s also important to underscore how these pathologies are baked into the very DNA of a commercial press, resulting in media’s capture by unfettered capitalism.

Democratic theorists have long warned us against this kind of market censorship, a filtering process that creates patterns of omission and emphasis in which some voices and views are elevated, and others muffled, according to commercial values, especially the need for profit to satisfy media owners and investors. They rightly observe that much of this power traces back to the influence of advertising, which privileges some narratives and some audiences over others, thereby essentially redlining the news by serving whiter and wealthier audiences.

A commercial press that’s overly reliant on advertising revenue and “access journalism” based on elite sources, simply is—and always will be—ill-equipped to defend democracy. Despite noble exceptions, such a profit-first system will consistently marginalize progressive issues and favor news frames that align with elite interests and worldviews.

For many journalists who have internalized these norms—a code of professional ethics that traces back to the first half of the 20th century when publishers assumed a semblance of “social responsibility” to stave off public criticism of commercial excesses in the press—these practices are carried out in the name of objectivity. It’s this orientation that led a board member of the Society of Professional Journalists to recently suggest that journalists shouldn’t adopt a pro-democracy bias in reporting.

This commercial system’s shortcomings are symptomatic of core structural maladies—namely, profit imperatives that overwhelm commitments to democratic principles. It’s not simply a few bad journalists and news organizations; it is deeply systemic. While critiquing corporate media is an important exercise—public pressure can help push the needle toward more progressive and democratic narratives—at least part of our focus needs to be on apprehending and changing the underlying structures that help produce bad journalism.

This media reform project is especially urgent now, as much of the professional journalism ranks have been decimated in the last two decades. Our long-term strategies for democratizing media should include building nonprofit and public alternatives to failing commercial models.

Today, exciting new experiments are taking root across the country—many are independent, grassroots-driven and noncommercial—but we still need a society-wide approach to ensure that all members of the public not only have access to reliable and diverse news and information, but also have opportunities to make their own media and tell their own stories. Ultimately, we must democratize our media, but first we must remove journalism from the market as much as possible.

This task of de-commercializing our media is made more feasible by the market itself, as profit-seeking entities (with the unfortunate exception of vulture hedge funds) abandon local journalism altogether. We’re faced with a historic opportunity to create a new media system from the ground up. It’s incumbent upon all of us who have a pro-democracy bias to work towards building true structural alternatives to the run-amok commercial system we’ve inherited in the US. Because what’s damn good for CBS is really bad for democracy.

This content originally appeared on FAIR and was authored by Victor Pickard.