The tools of psychology are dangerous in the hands of the wrong men. Modern educational methods can be applied in therapy to streamline man’s brain and change his opinions so that his thinking conforms with certain ideological systems. 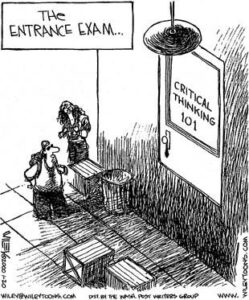 Since the declaration of the Covid-19 Pandemic in March, 2020, the phenomenon of “mass formation psychosis”, essentially hypnosis at population level, has become a major subject for discussion, due largely to interviews of psychiatrist Mattias Desmet. Becoming aware of it, one begins to recognize the effects of the cultivation of anxiety and mental confusion, of the steady diet of terrifying data, of constantly changing and conflicting information, of enforced compliance to shifting policies demanding physical and visual isolation.

Joost Meerloo, in Rape Of The Mind, described totalitarian methods throughout the ages used to force obedience. Modern society, with its refined techniques in marketing and mass communication, he wrote, “tends to robotize and automatize man.” Where competing interpretations of reality are censored, what is constantly repeated “fixes patterns of thought”, which patterns assume realities of their own. “He who dictates and formulates the words and phrases we use, he who is master of the press [and TV], is master of the mind.”

Countering totalitarian technique calls for critical thinking, a pattern of thought hesitant to accept information immediately at face value. Critical thinkers look for inconsistencies within narratives. It’s said that critical thinking can’t be taught, because accumulated life experience is a factor in its ultimate development, if it ever develops at all in a lifetime. On the other hand, critical thinking is open to cultivation, and presumably its cultivation is a feature of liberal education.

Given that, the online search technique now advocated by the Center for an Informed Public came as a surprise for anyone used to seeing critical thinking as a positive trait. The SIFT method, so called, which boasts about the speed with which one can make quick judgments of online material — as briefly as within 30-seconds — would seem to be a recipe for superficiality that brings to mind claims that society is being “dumbed down”. The professed target of SIFT is the evil of “misinformation” — that Pandemic-era charge that is oddly vague beyond its failure to hue to an official, but conflict-riddled, story. SIFT is based on a four-step system suggesting that one often makes better decisions with less information rather than with more.

The New York Times showcased SIFT with an opinion piece subtitled “Critical thinking, as we’re taught to do it, isn’t helping in the fight against misinformation”. One is prompted to “stop overthinking”, because “the goal of disinformation is to capture attention, and critical thinking is deep attention”, this causing people to fall prey to bad actors such as conspiracy theorists who can “warp your perspective”. An example of the SIFT method uses Robert F. Kennedy, Jr., long a target of the NY Times, which paper, remarkably, will not review Kennedy’s The Real Anthony Fauci, nor will it even post a paid ad for the book.

In the example, Kennedy’s name is Googled — “Look how fast this is” — to a sentence on a Wikipedia page identifying Kennedy as anti-vaccine and a conspiracy theorist. Two other sources, a fact checker and the NIH, indicate Kennedy’s views as “outside the consensus”. Not being in accord with majority thinking indicates bias, “And that’s good enough to know we should probably just move on.”

In 2016, there appeared a website, PropOrNot, claiming that Russia was manipulating US opinion online. What stands out is that examples by PropOrNot of information sources that “produce large amounts of propaganda content” are substantially a recitation of excellent sites for crucial information shunned by monopoly media, and for sources of incisive, in-depth analysis and commentary (take a look!), e.g. Corbett Report, Activist Post, Global Research, Paul Craig Roberts, and the like.

What makes PropOrNot momentous, in this case, is that the Washington Post, in an article “Russian propaganda effort helped spread ‘fake news’ during election, experts say” included PropOrNot, describing it as “a nonpartisan collection of researchers with foreign policy, military and technology backgrounds”. Nonpartisan? Hardly! For America’s number 2 “Newspaper of Record”, famously a CIA mouthpiece, to give credence to PropOrNot was an assault against foremost sources challenging official narrative.

Another Washington Post piece invites readers to take a confusing quiz to determine “Will you fall into the conspiracy theory rabbit hole?.” Example: Reader is to choose, from 4 items, the only one declared to be backed by evidence. However, a careful search of the items (GMO food dangers; LSD experiments; AIDS spread; Coronavirus creation) reveals that every one has at least some details open to question. The quiz, in effect, implies that certain questionable issues are “case closed,” when they truly are not. Items covered in the quiz (e.g., election fraud, JFK assassination, false flags, Russian collusion, Rothschilds, Deep State, climate change, et al.) are seemingly matched so as to delegitimize certain avenues of exploration.

In The Rape Of The Mind, in a chapter titled “Mental Contagion And Mass Delusion,” Meerloo writes: “The lie I tell ten times becomes a half truth to me. And as I continue to tell my half truth to others, it becomes my cherished delusion.” Since the Pandemic was declared, the official framework of falsehoods has become truth for much of humanity. Yet some saw through the deception early on. How come?

Igor Chudov, a former student of behavioral economist Richard Thaler, believes those who recognized the fraud are critical thinkers (Chudov has broken with Thaler who is now a central figure in the project to maximize “vaccine uptake” in society1 ). Chudov, cites the famous Asch conformity experiments that reveal how easily people are seduced by majority opinion. He is interested in critical thinkers, and at his Substack site he invites those who saw through the Pandemic deception to explain their experience.

A key revelation of the Asch experiments was the importance of dissenting voices in countering projects directed toward mass conformity. The dissenter is a reminder that prevailing consensus might be absolutely wrong. This is why departure from the official pharmaceutical/governmental Covid Pandemic story line is attacked as “misinformation” with such viciousness and is pilloried in mainstream media (mass conformity having become a principle MSM aim). From the standpoint of the engineers of the Pandemic narrative, with its goal of injecting humanity with RNA technology, critical thinking is a direct threat, and it is being undercut by every means available.

The post A Campaign Against Critical Thinking first appeared on Dissident Voice.

This content originally appeared on Dissident Voice and was authored by Bill Willers.