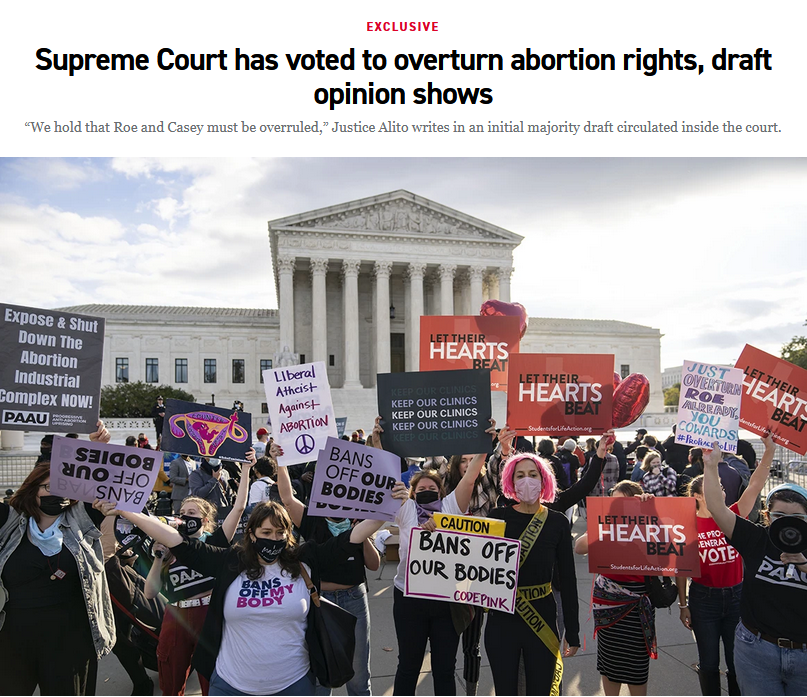 The leaked Supreme Court draft opinion that could destroy Roe v. Wade (Politico, 5/2/22) reportedly has the support of three justices appointed by Donald Trump. That’s important for a number of reasons.

Neil Gorsuch was appointed after the Republican Senate blocked Barack Obama’s nominee to replace Antonin Scalia until after the election, in hopes of retaining a 5–4 conservative balance. Brett Kavanaugh replaced Anthony Kennedy, who stepped down specifically so his seat could continue to be held by a Republican appointee. And the last appointee, Amy Coney Barrett, replaced liberal stalwart Ruth Bader Ginsburg, solidifying a 6–3 conservative advantage a week before the 2020 presidential election. Barrett’s confirmation also exposed the cynicism of Republican Senate Majority Leader Mitch McConnell, who had blocked Obama’s pick for Scalia’s seat on grounds that it was an election year, but hurried Barrett’s confirmation.

All three were nominated by a president who did not win the popular vote, further undermining the bench’s credibility as a democratic institution. (The author of the leaked opinion, Samuel Alito, was also named by a popular vote loser, George W. Bush—as was Chief Justice John Roberts, considered a possible sixth vote, along with Clarence Thomas, for overturning Roe.)

And in all three of Trump’s nominees, major liberal-leaning outlets offered pieces reassuring readers that fears that these justices would undo Warren Court decisions upholding civil rights were overblown. 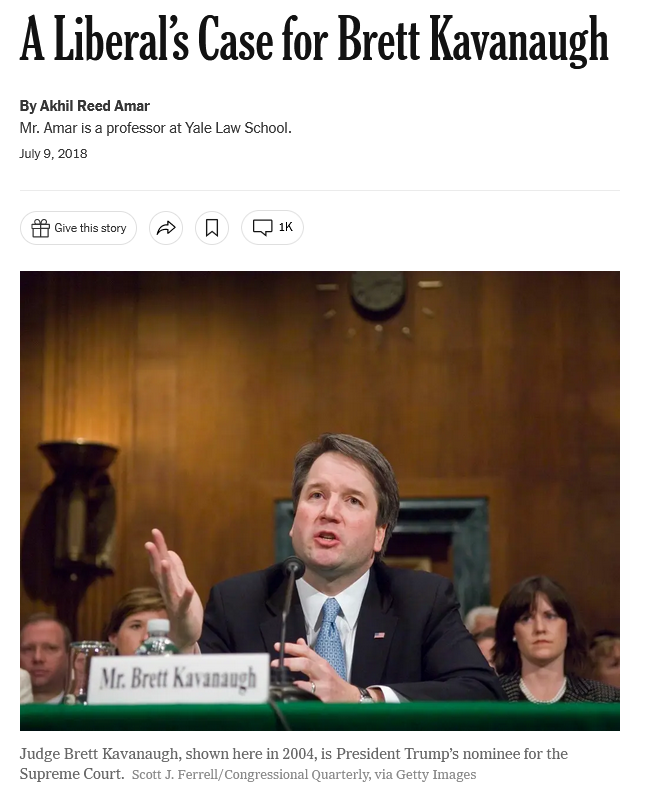 Kavanaugh had two prominent liberal defenses in the media after Trump offered him to the public. In the New York Times (7/9/18), Yale law professor Akhil Reed Amar rested his defense on Kavanaugh’s scholarship, saying that he “has taught courses at leading law schools and published notable law review articles,” and is “an avid consumer of legal scholarship.” Amar added, “This studiousness is especially important for a jurist like Judge Kavanaugh, who prioritizes the Constitution’s original meaning.”

Even before sexual allegations against Kavanaugh emerged, liberals worried about his partisan record, namely his role in the special prosecution of Bill Clinton (NPR, 8/17/18) and his opinions on abortion rights (New York Times, 7/18/18). But the Amar defense—coming from not just a liberal but a renowned constitutional scholar—was joined by another Yale scholar (9/6/18), emeritus law professor Peter Schuck, offering the argument that “justices often do not perform the way partisans and the news media expect them to.”

In particular, Schuck suggested, “even some conservative justices may resist overturning Roe v. Wade,” because “it is hard to predict how courts will apply the multiple criteria…for deciding when precedents may be overturned.” While supporters and opponents both saw Kavanaugh as “a guaranteed vote to overrule Roe…hard cases often cause justices to confound ideological expectations.” Rather than seeing Supreme Court nominations as “a Manichaean liberal/conservative battle for legal supremacy,” the professor urged senators and journalists to focus on “the fascinating interplay among legal doctrine, textual interpretation and the factual record in determining outcomes.”

Conservative Times columnist Bret Stephens (7/12/18) insisted that “liberals always cry wolf” about threats to reproductive rights. (The Times editorial board—9/26/18—did c0me out against Kavanaugh, saying the allegations against him were grave and put the integrity of the court at risk.)

Lisa Blatt, a constitutional lawyer and self-described liberal feminist, deferred to Kavanaugh’s warm personality (Politico, 8/2/18), saying he “is a great listener, and one of the warmest, friendliest and kindest individuals I know.” She also said “other than my former boss, Justice Ruth Bader Ginsburg, I know of no other judge who stands out for hiring female law clerks,” a line that that makes one wince when put next to the sexual allegations against him (PBS,  9/16/19).

‘A sense of fairness and decency’ 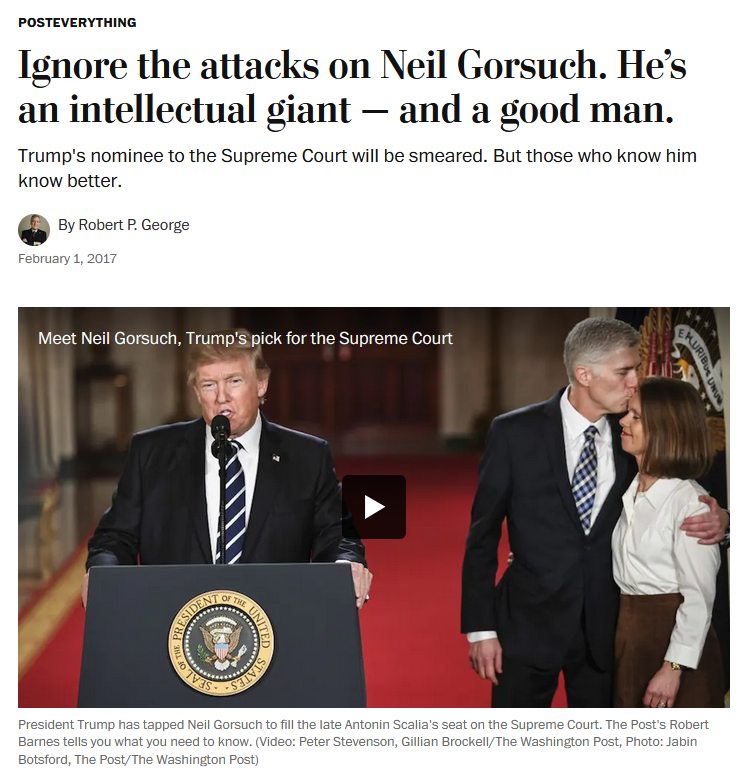 “Gorsuch will be a hard man to depict as a ferocious partisan or an ideological judge,” law professor Robert George wrote in the Washington Post (2/1/17). “As Gorsuch himself has frequently observed…good judges sometimes have to vote or rule in ways they do not like.”

On Gorsuch, the New York Times (1/31/17) had Neal Katyal, a former acting solicitor general under President Obama, saying liberals should support Gorsuch because the conservative jurist “brings a sense of fairness and decency to the job, and a temperament that suits the nation’s highest court.” He “would help to restore confidence in the rule of law,” Katyal assured, because he has defended “the paramount duty of the courts to say what the law is, without deferring to the executive branch’s interpretations of federal statutes.”

The Washington Post seemed to make getting Gorsuch confirmed a crusade. As Extra! (3/17) noted:

In the first 48 hours after Neil Gorsuch was nominated to the Supreme Court by Donald Trump (1/31/17–2/2/17), the Washington Post published 30 articles, op-eds, blog posts and editorials on the nomination. Thirteen were explicitly positive, while 17 could be construed as neutral—but not a single one was overtly critical or in opposition to Gorsuch (FAIR.org, 2/2/17). Apparently editors thought columns like “Ignore the Attacks on Neil Gorsuch. He’s an Intellectual Giant—and a Good Man” (2/1/17) required no balance.

As for Amy Coney Barrett, O. Carter Snead, a Notre Dame law professor, wrote in the Washington Post (9/26/20) that “liberals have nothing to fear” from her: “She genuinely seeks to understand others’ arguments and does not regard them as mere obstacles to be overcome on the way to reaching a preferred conclusion.” It was Barrett’s religion, Snead said, that led to “her commitment to treating others with respect.” But put this in context: Snead is vocally against Roe (National Affairs, 11/7/21; Washington Post, 5/5/22).

All of these pieces exhibit a kind of naivete about the right’s vision of the court. They share the assumption that while all the nominees were conservative, as jurists they were also “above politics,” because their scholarship and congeniality made them different from partisans in the executive and legislative branches. But it has been very clear since the civil rights era that part of the conservative movement’s long game has been to appoint justices to federal courts who would undo gains made under the Warren Court, and to advance the interests of conservatives (Time, 6/22/21).

It’s easy to scoff at these articles as “pieces that didn’t age well.” But the polite “above the fray” attitude toward the Court that they embody hasn’t been the governing norm for decades. The 5–4 majority in favor of handing the 2000 election to the Republicans without counting the votes made it clear, if it hadn’t been already, that the Court is utterly politicized. And the move by Mitch McConnell’s Senate to deny Obama the right to appoint a justice who could have tipped the political balance of the Court proved that the Republican approach to top judge nominations is simply not in good faith. But even during the Trump administration, it seems that a lot of what are called “liberal” media could not fully come to terms with that fact.

Featured image: Detail from an NPR graphic (5/3/22) of Supreme Court justices who supported a draft opinion that would overturn Roe.

The post ‘Liberal’ Newspapers Liked the Justices Who Will Kill Roe appeared first on FAIR.