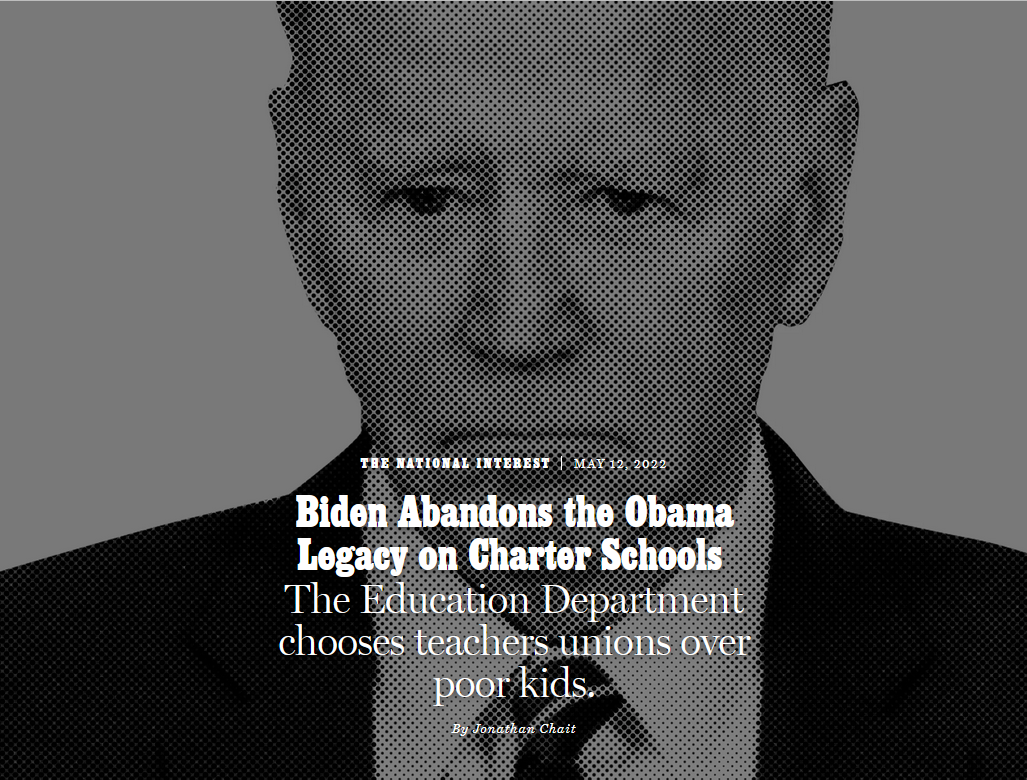 Jonathan Chait (New York, 5/12/22)defended the Department of Education’s Charter Schools Program–without mentioning that this program has given millions to the employers of Chait’s spouse, Robin Chait.

In his latest article on the topic, “Biden Abandons the Obama Legacy on Charter Schools” (5/12/22), Chait claimed that the current administration is abandoning the governmental commitment to the Department of Education’s Charter Schools Program (CSP), which directs around $440 million annually toward public charters.

Left unsaid, and not for the first time, is that the well-known liberal blogger’s wife, Robin Chait, works with charter-boosting nonprofit WestEd. At the research nonprofit, according to her LinkedIn, she  “support[s] education organizations in increasing equitable opportunities for students served by charter schools or through school choice policies and programs”—and the organization has benefited from the very program Jonathan Chait was defending, receiving contracts worth millions.

Chait’s lack of disclosure about his spouse’s work when writing about teachers unions and charter schools has been a point of contention for years. Critics charge that by declining to disclose his family’s financial interest in the charter industry, the writer is giving his audience an incomplete picture of the context behind his articles; he has retorted that his position as an opinion journalist exempts him from disclosure, a position shared by his editors at Vox Media and New York.

Given the ethical questions raised by his latest foray into the charter school debate, however, Chait’s immunity from journalistic standards is even harder to justify.

In last week’s essay—another in a long line of pro-charter, anti–teachers union pieces he has written over the years—Chait railed against the Biden administration for adding restrictions to the DoE funding and requiring a more collaborative approach with existing school districts. The merits of this pro-charter argument aside, it’s clearly advocating in favor of the charter school industry and promoting its ability to compete with existing public school programs.

In a glaring moment of hypocrisy, Chait attacked DoE for directing a reporter from the education outlet Chalkbeat to the Network for Public Education, given what he saw as an obvious conflict of interest:

The Network for Public Education is a militant anti-charter group that takes funding from teachers unions (a fact Chalkbeat’s neutral story did not mention). Outsourcing your response to that group is essentially confessing that you are turning over charter-school funding regulation policy to the teachers unions.

Nestled in this attack on the NPE is what could, possibly, be considered a disclosure. Chait included a hover-over-superscript disclosure in the text, not there unless you look for it. But the note reads more as an angry diatribe about why Chait shouldn’t disclose his spouse’s role in charter-boosting:

My wife works as an analyst for a nonprofit education consulting organization that is not involved in policy advocacy. I’ve found that when I mention this in my articles, critics take it as a confession of a conflict of interest, even though it isn’t—not by any rational standard, and certainly not by the existing standard, which allows institutions and commenters who take funding from interested parties like the teachers unions to never disclose their funding sources. To make the point about my wife’s employer more clearly: It has repeatedly expressed its preference that I do not write about education policy. By writing about education here and in other columns, I am defying, not advancing, the interests and desires of my wife’s employer.

It’s hard to imagine a reason WestEd wouldn’t want Jonathan to write about education other than it being a conflict of interest. Yet the issue is not whether or not WestEd, or even Robin Chait herself, wants Jonathan Chait to write about education policy. The issue is whether or not Chait should disclose the connection in the first place–and in the proper text of the article, rather than a hyperlinked footnote requiring the reader to take multiple extra steps.

Any editorial team member or contributors will be recused from a story and/or publicly disclose conflicts of interest when editorially appropriate. This may include a personal or family relationship, personal financial investment or relevant political activity.

Diane Ravitch’s Blog (5/13/22): “This is not the first time Chait has been called out for not disclosing his wife’s connections with charters. But given the topic and her work in organizations connected with the Charter School Program, this is the worst omission yet.“

NPE executive director Carol Burris, in a post on fellow education expert Diane Ravitch’s blog (5/13/22), laid out a convincing case that Chait’s latest article oversteps even the limited disclosure he had put in the article’s footnote aside:

Now let’s talk about what Jonathan Chait failed to disclose as he opposed the CSP regulation reforms, using the same misinformation that has appeared in other op-eds.

His wife worked for Center City Charter Schools as a grant writer when that charter chain received two grants from the Charter School Program (CSP), the program whose loose rules he is now defending. Download the 2019 database that you can find here and match the years of dispersion to the resume of Robin Chait. But the undisclosed conflict continues to this day. Since 2018, Robin Chait has worked for WestEd, which evaluated the CSP during the Betsy De Vos era. And her employer, WestEd, once got its own $1.74 million grant from CSP.

WestEd, where Robin Chait has worked since October 2018, has received CSP funding from the Department of Education, most notably an open grant that’s already paid out $8.1 million to evaluate CSP and work with grantees. The contract, issued in September 2020, is one of a number of high-value DOE grants received by WestEd. 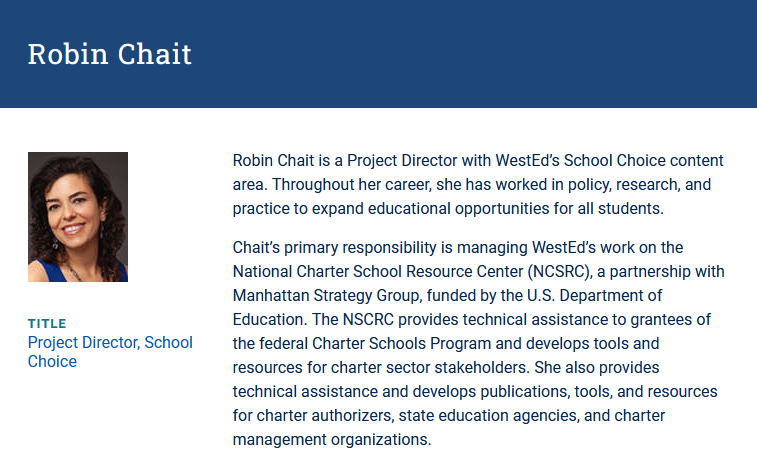 WestEd itself makes the connection between Robin Chait’s work and the CSP crystal clear in her company bio:

Chait’s primary responsibility is managing WestEd’s work on the National Charter School Resource Center (NCSRC), a partnership with Manhattan Strategy Group, funded by the US Department of Education. The NSCRC provides technical assistance to grantees of the federal Charter Schools Program and develops tools and resources for charter sector stakeholders.

“Saying ‘my wife works for a nonprofit’ is irrelevant when there is a link to the commentary,” Burris told FAIR:

Robin Chait’s time at Center City Charter Schools, where she worked before WestEd, coincided with at least two grants from the CSP, the same office that Jonathan defended in his piece. The CSP gave Center City two grants during Chait’s 2013–18 time with the school: $194,435 for 2013–15 and $172,880 from 2017–19. While Chait’s LinkedIn resumé lists her work at the charter as directing “recruitment, hiring, onboarding, compensation and employee retention/relations for a charter network of six campuses that serves about 1,400 students,” her daughter, in a Slate interview from 2018 (3/5/18), said that Robin Chait “does a ton of grant-writing for them, too.”

“She likely was the person who applied for the school’s CSP grant,” Burris said.

Such overlap with Robin Chait’s work seems like a clear example of the kind of conflict of interest that would, at the very least, necessitate a disclosure. But Jonathan Chait disagrees. In his newsletter on May 13, which he personally emailed to this reporter with the note, “Thought you’d like to see this,” the New York blogger wrote that he shouldn’t have to disclose, in part because “many journalists have spouses who work in politics or government, and whose work would be impacted in some way by changes to policy,” and “those roles are essentially never disclosed.”

Whether or not this is true is, of course, immaterial to whether Chait should disclose his spouse’s position in an upfront and clear manner during his reporting on charters. In FAIR’s prior report (11/17/20) on Chait’s lack of disclosure, SPJ Ethics Committee member Andy Schotz said he was perplexed by the writer’s frequent refusal to disclose his wife’s job while writing pro-charter and anti–teachers union pieces.

“If he’s writing advocacy that’s his personal opinion, that’s not covering it in a neutral way and doesn’t absolve him of the responsibility,” Schotz told FAIR at the time. “Disclosure is the easy way to avoid that.”

Since that article, Chait’s record on disclosure has continued to be spotty. He declined to mention his wife’s position in the industry in a number of articles attacking teachers unions and/or boosting charters (2/4/21, 8/3/21, 1/17/22, 3/21/22), and when he did mention her position (1/5/21), downplayed it: “Her current role is with a nonprofit organization, consulting for and providing technical assistance to schools and state education bodies.”

One has only to look at the comment section any time Chait writes about education to see the damage the lack of disclosure has done to his and New York’s reputation on the topic. Over and over again, his readers cite the conflict of interest as a reason not to take anything he writes on education seriously.

Ultimately, no newsroom is subject to enforceable regulations around ethical disclosure. It’s solely at Vox Media’s discretion whether or not Chait should disclose his connection to the industry he regularly uses his platform to promote.

But if New York, and Jonathan Chait himself, want to be taken seriously on education, disclosure is the least they can do.

ACTION ALERT: You can send a message to New York magazine at comments@nymag.com, or via Twitter @NYmag. Please remember that respectful communication is the most effective. Feel free to leave a copy of your message in the comments thread here.

This content originally appeared on FAIR and was authored by Eoin Higgins.