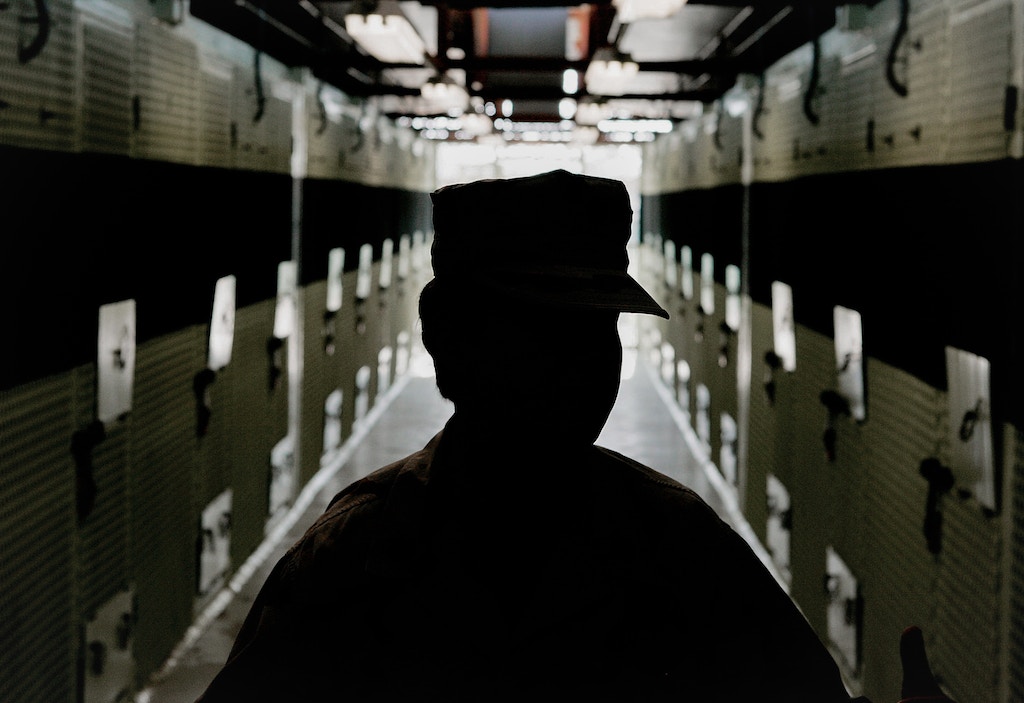 A member of the U.S. Military inside of the Camp 2 cell block at Camp Delta in Guantanamo Bay, Cuba on May 9, 2006.

Army Staff Sgt. Joseph Hickman was on guard duty at Guantánamo Bay, in a tower with the entire prison complex sprawled out beneath him, when he saw a white prison transport van drive from Alpha Block toward the prison entrance gate. It was the evening of June 9, 2006. Once the van passed through the gate, it made an unusual left turn. The only possible destination for detainees in that direction was a CIA black site some of the guards referred to as “Camp No,” because officially it did not exist. As the sun was setting, after the detainees had their evening meal, Hickman observed the van driving twice more toward the facility. Hours later, three detainees were declared dead.

The official explanation that the government has maintained for 16 years this week is an unbelievable version of events that has been ripped apart in later reporting. The Navy says the men killed themselves by hanging, in separate nonadjoining cells, in the same way, at the same time, under video surveillance, with no guards noticing and no prisoners calling for the guards to intervene. They tell us that each of the men had bound their wrists and ankles with fabric and shoved fabric down their own throats — and then ask us to believe that they hung themselves.

Despite explosive reporting by Scott Horton for Harper’s Magazine in which multiple sources, including Hickman, refuted the official narrative and gave evidence that a cover-up had taken place, no independent official investigation of the incident was ordered. The Department of Justice, asked to look into the Navy’s unbelievable explanation of events, eventually reviewed the allegations of cover-up and found “no evidence of wrongdoing.”

This disturbing episode quickly turned unspeakably dark: Independent autopsies ordered by the families of the dead were useless since the bodies, which showed signs of torture, had been sent home with missing parts. The men’s throats — the larynx, the hyoid bone, and the thyroid cartilage — had been removed. Even after this shocking finding, the door was closed; there would be no investigations. Hickman went on to publish a book titled “Murder at Camp Delta.”

For the American public, the loss of three unknown “terrorists” to suicide at Guantánamo prison was a passing story, if it registered at all, in the endless news cycle of America’s “war on terror.” But for Mansoor Adayfi, an innocent Yemeni man trapped in Guantánamo, it was the night everything changed. He knew the three men, he told The Intercept. They had protested together, gone on hunger strike together, put themselves through hell to demand basic rights and human decency.

In his memoir, “Don’t Forget Us Here,” Adayfi lays out his own account of that summer night. Mere hours after the men died, a devastated Adayfi was interrogated and beaten over the incident. Former detainees Mohamedou Slahi and Ahmed Errachidi said in an interview that their cells, even in solitary confinement, were searched that night. The dead men — Salah Ahmed Al-Salami, 37; Mani Shaman Al-Utaybi, 30; and Yasser Talal Al-Zahrani, 22 — all of whom had been held without charge, were attacked by the camp commander. “They are smart, they are creative, they are committed,” Rear Adm. Harry B. Harris Jr. said. “They have no regard for life, neither ours nor their own. I believe this was not an act of desperation, but an act of asymmetrical warfare waged against us.” Angry guards and interrogators, embarrassed by the event, embarked on a monthslong crackdown.

“Nothing made sense,” Adayfi writes. “None of the brothers had talked about suicide. None of us had. We had just survived the hunger strike together. Conditions at the camp had gotten better, and we were preparing to strike again for even more changes.”

In “Murder at Camp Delta,” Hickman writes that none of his guards who had a clear view of the camp and the medical clinic saw any detainees moved from their cells to the clinic. Hickman himself watched the white van return to camp and drive directly to the clinic, though he was unable to see what was unloaded from the van because his view was blocked. Two guards who had unobstructed views of the walkways connecting the clinic with the cellblocks confirmed to Horton that they had seen no prisoners taken there from the cells.

Hickman and Adayfi remain steadfast in the conclusion that it was impossible that these men died by suicide in their cells. “This was murder,” Hickman said. “I think about it every single day.”

Adayfi explains that he and his “brothers,” fellow detainees, always did everything in their power to prevent a suicide from occurring. “I can’t say exactly what happened,” he told me. “Somehow, they were killed.” 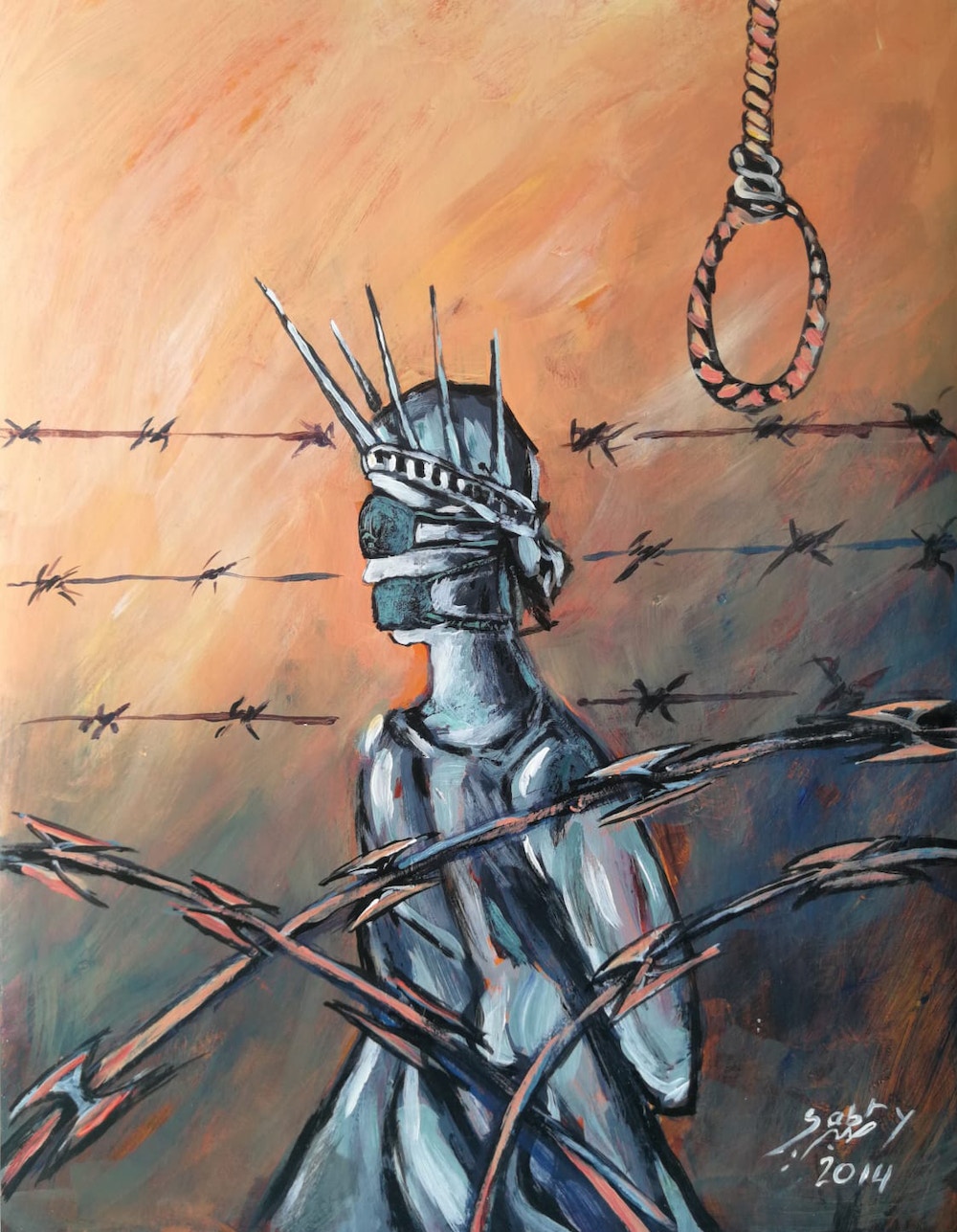 A drawing made by Sabry Al Qurashi while he was detained at the Guantánamo prison in 2014.

Additional mysterious deaths followed over the years. In all, nine detainees have died at the prison. Allegations of cover-ups emerged, but the deaths remained shrouded in secrecy.

With few exceptions, no one really cared. Even the preposterous story put forward about these “suicides” failed to shock the public into condemning the ongoing travesty of justice that Guantánamo represents. The narrative that these men did something terrible and deserved to be imprisoned for it defines the very nature of the post-9/11 response. It doesn’t matter that the original accusations against many of them were flimsy and easily disproved. Due process and the presumption of innocence, the defining values of the American ideal of justice, would be forever denied them. The vague language of “enemy combatants” and “terrorists” dehumanized men across the Middle East to the point at which the U.S. was able to commit profound abuses of human rights with impunity and public support.

“This was murder. I think about it every single day.”

Americans were convinced in the years after 9/11 that the men locked in Guantánamo — or being killed in drone strikes abroad or tortured in CIA black sites — were sworn enemies of the United States who deserved to die before they could cause more senseless death. And so the atrocities followed, committed over multiple administrations on a global battlefield where U.S. forces played judge, jury, and executioner against “terrorists” and “enemy combatants” who also happened to be farmers, taxi drivers, mothers, and children, producing an unbearable human toll exposed only by painstaking reporting.

Renewing calls for justice for the men who died at Guantánamo feels like an exercise in futility, yet those permanently maimed by Guantánamo refuse to stop seeking justice. “I would like to see the people that were behind it held responsible, but it’s never gonna happen,” Hickman says. “I think it was murder, and it should never go away. It should be investigated until it’s solved.”

The deceit and lies and cover-ups of the worst moments in post-9/11 history have created an endless stage of hypocrisy for all the world to see.

Ahmed Errachidi, a Moroccan chef wrongly imprisoned for years at Guantánamo, said that the longer the injustice at the detention camp continues, the more damage it does to the “reputation and the legacy of American culture, American principles, and American morals.” He called for former Guantánamo detainees to be allowed to finally testify before Congress and for victims of CIA torture to be allowed to take the American government to court. “You are a nation who stands for freedom, rule of law, human rights,” he said. “The whole world is watching.”

This content originally appeared on The Intercept and was authored by Elise Swain.