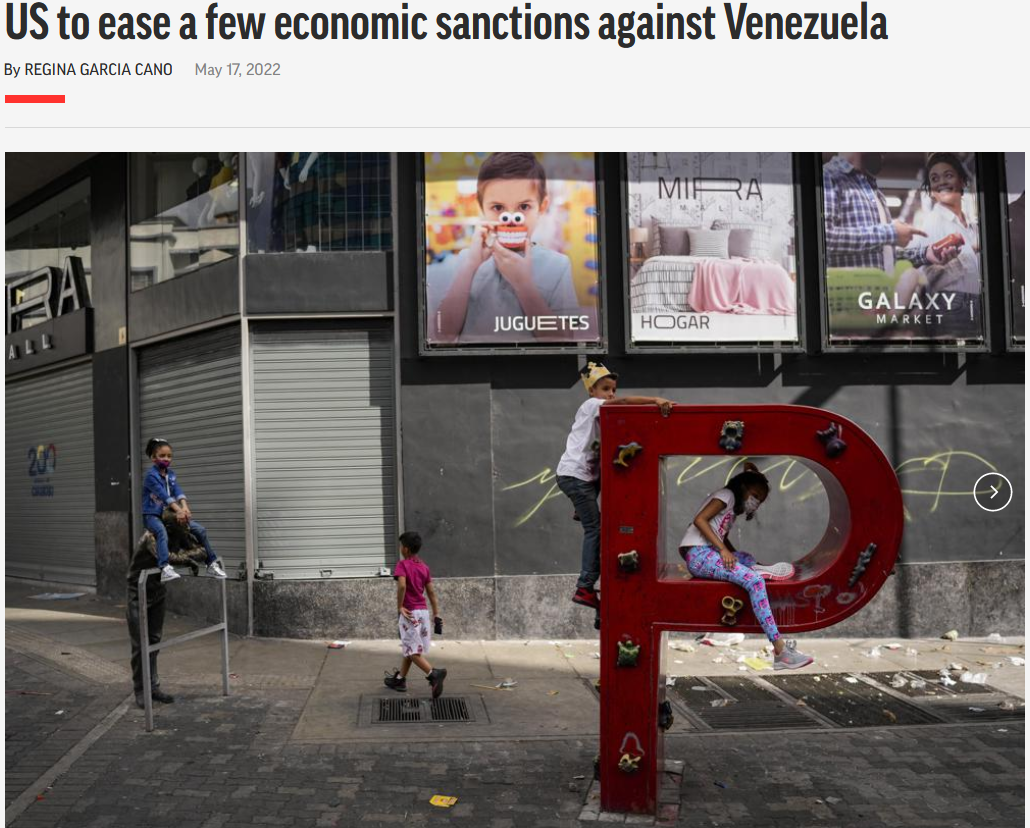 US sanctions, even by outdated estimates, have killed tens of thousands of Venezuelans. The unilateral policies have been widely condemned by multilateral bodies and human rights experts for their deadly impact, as well as for violating international law (Venezuelanalysis, 9/18/21, 9/15/21, 3/25/21, 1/31/19).

But corporate media readers/viewers in the Global North are completely oblivious to this reality, as establishment outlets have gone out of their way to endorse sanctions by whitewashing their effects altogether (FAIR.org, 6/4/21, 12/19/20)—writing for example, that Washington has “sanctioned the government” (AP, 5/21/22) rather than the people of Venezuela.

A recent policy opening, microscopic to begin with and closed quickly enough, put all these dishonest traits on display, illustrating how free a rein US officials have to continue inflicting collective punishment on Venezuelans without challenge or scrutiny. 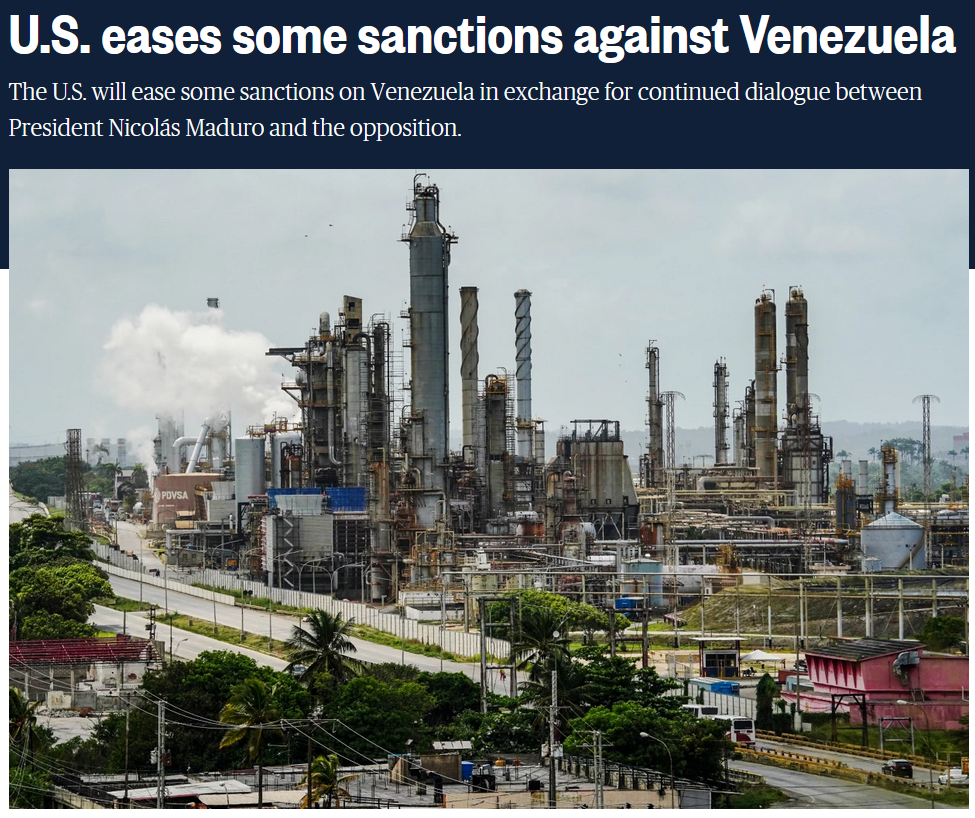 The US Treasury Department on May 17 allowed the US-based oil company Chevron to talk to PDVSA, the Venezuelan state oil company, to discuss its operations in the country. Officials made clear that the energy giant remained forbidden from drilling or dealing in Venezuelan crude (AP, 5/17/22).

First off, all mainstream outlets had virtually the same headline, writing that the US “eases some sanctions” (NBC, 5/17/22), was “to ease a few economic sanctions” (AP, 5/17/22) or “begins easing restrictions” (Washington Post, 5/17/22) on Venezuela. And though the very narrow scope of the authorization left few word choice alternatives, it certainly did not force corporate journalists to stick to the information spoonfed by “anonymous officials.”

Not a single establishment outlet mentioned that sanctions have an impact on ordinary Venezuelans. Instead, the privilege of “just talking” to oil execs was painted as an incentive for President Nicolás Maduro to resume talks with the opposition. 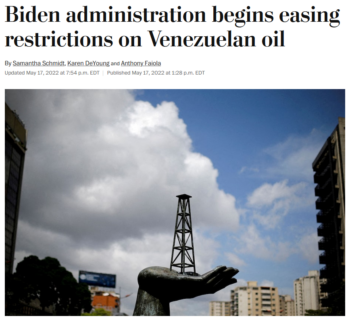 …and the Washington Post (5/17/22) told readers that the US “begins easing restrictions.”

The meager background/context provided in most pieces left room for plenty of representations. When referencing why government/opposition talks broke down last October, readers were told that Maduro walked away after the “extradition of a close/key ally” to the US (Washington Post, 5/17/22; AP, 5/17/22). However, there was no mention of the fact that, according to documents disclosed by Caracas, the “ally” in question (Alex Saab) has diplomatic immunity, and that Washington violated the Vienna convention by having him arrested overseas and extradited (FAIR.org, 7/21/21).

Corporate outlets continued the habit of echoing unfounded charges against the Maduro administration as absolute truths, be they about electoral fraud (FAIR.org, 1/27/21), drug trafficking (FAIR.org, 9/24/19) or media censorship (FAIR.org, 5/20/19). The consequence is that by now no editor will flinch at a description of the Venezuelan government as “authoritarian” (Washington Post, 5/17/22), “autocratic” (CNN, 5/17/22) or “corrupt and repressive” (New York Times, 5/17/22).

Establishment journalists were also happy enough to echo mobster-like threats from their anonymous sources, namely that the US will “calibrate” sanctions depending on whether progress in government/opposition talks is deemed acceptable (Reuters, 5/17/22; NBC, 5/17/22; AFP, 5/17/22; AP, 5/17/22). US officials refer to policies that are killing thousands of civilians as though they were a dial they can turn up or down at will, and their enablers in the media see no reason to be alarmed by this. 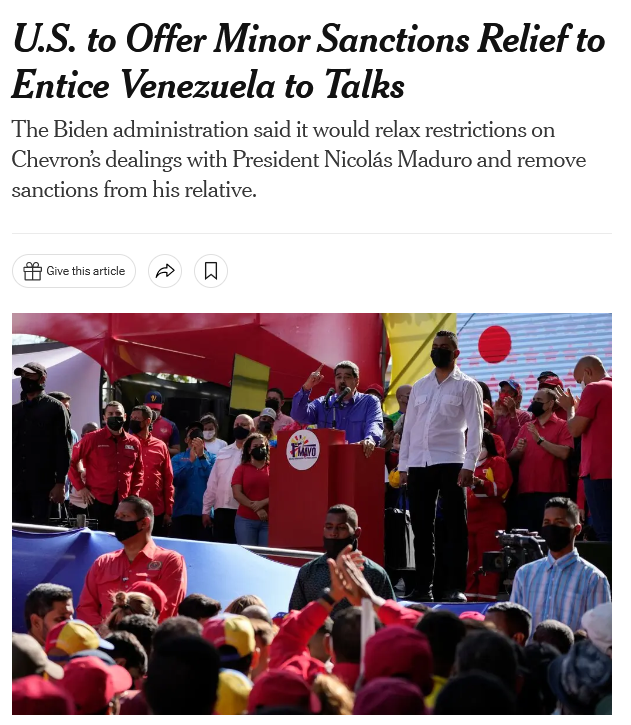 The New York Times (5/17/22) more accurately headlined that the US was going “to offer minor sanctions relief.”

For its part, the New York Times (5/17/22) described the steps as “minor sanctions relief” which despite the adjective still seems a bit overstated, considering that sanctions include an oil embargo and this was just an opportunity to talk to Chevron. The paper of record also tried to paint sanctions as having little to do with the collapse of Venezuela’s oil industry, writing that they only began in 2019. In fact, the first measures against PDVSA—cutting it off from international credit—are from mid-2017, after which output collapsed from nearly 2 million barrels a day to 350,000 in three years (Venezuelanalysis, 8/27/21).

Simultaneously, Spain’s Repsol and Italy’s Eni got oil-for-debt licenses that “will not benefit [PDVSA] financially” (Reuters, 6/5/22). And no corporate journalist found any issue with the fact that somehow the US Treasury Department has the power to “let” European corporations deal with Venezuela.

Not all critics created equal 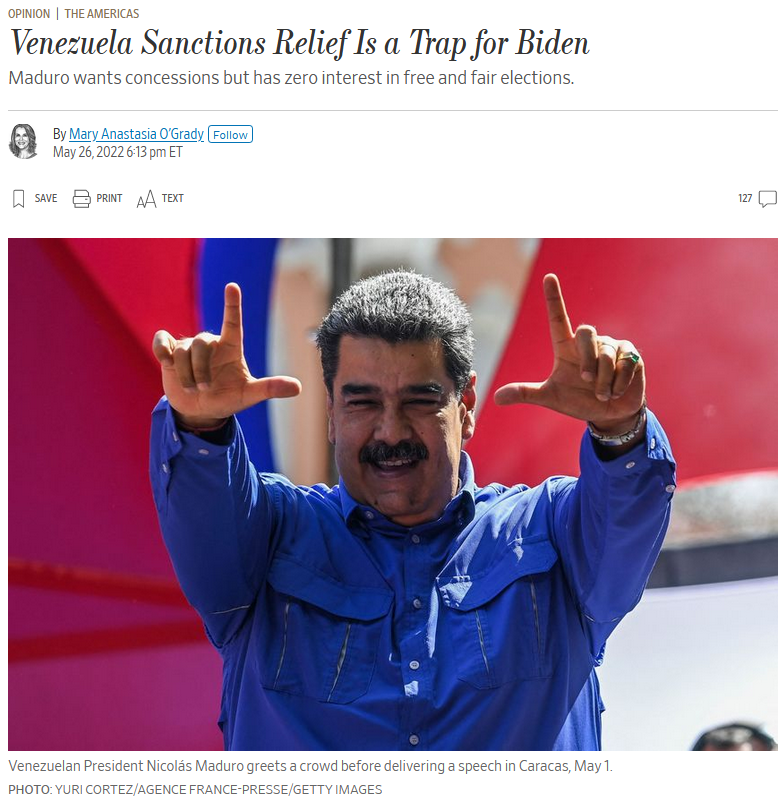 Mary Anastasia O’Grady (Wall Street Journal, 5/19/22) warned that the US was “tiptoeing toward a rapprochement with dictator Nicolás Maduro.”

The Biden administration revisiting its sanctions policy even a little bit has generated a ferocious backlash that fed corporate media bias. The Wall Street Journal’s opinion section provided its usual extremism, with editorial board member Mary Anastasia O’Grady (5/26/22) writing that the US might be “tiptoeing toward a rapprochement with dictator Nicolás Maduro that will abandon the cause of Venezuelan freedom.”

The Journal columnist referred to the opposition’s unelected Venezuelan “interim president,” Juan Guaidó, as “internationally recognized,” when the number of countries that actually recognize him is down to 16 (Venezuelanalysis, 12/8/21). She somehow presented the 2002 US-backed military coup that briefly deposed democratically elected President Hugo Chávez as “opponents defend[ing] the rule of law using institutions.”

But there was plenty of bias in news reports as well when it came to weighing pros and cons of the Biden administration’s initiative. Indeed, only “hawkish” criticism of official policy gets airtime (FAIR.org, 5/2/22).

A group of Venezuelan opposition figures, from economists to political analysts to business leaders, penned a letter to the Biden administration in April calling for sanctions relief (Bloomberg, 4/14/22). Though they conceded to the US’s supposed role in solving the country’s political crisis, they pointed out the obvious: Sanctions are hurting the Venezuelan people. Nevertheless, once it was time to discuss the sanctions policy, none of these figures was reached for comment by corporate journalists. 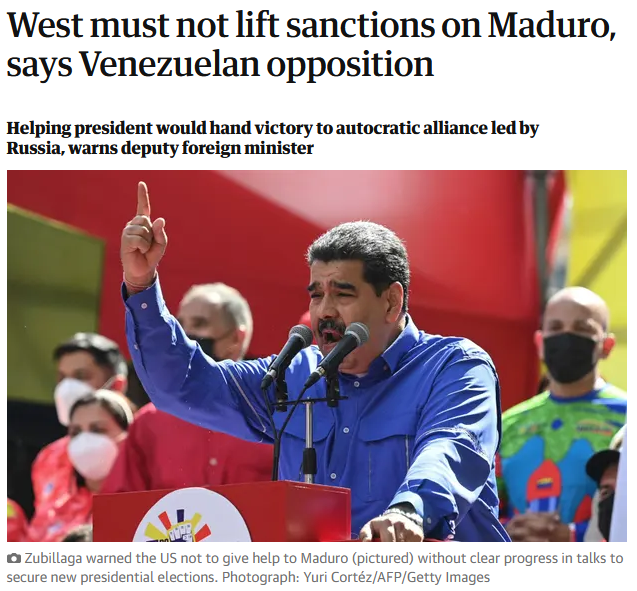 Lifting sanctions against Venezuela would “hand victory to an autocratic alliance led by Vladimir Putin,” according to whom the Guardian (5/14/22) called “the country’s deputy foreign minister.”

Instead, the Guardian (5/14/22) reached out to the hardliners, going as far as interviewing someone with a made-up job in Guaidó’s “interim government” and calling her “the country’s deputy foreign minister.” The US-sponsored politician opposed sanctions relief without political concessions and—keeping up with the latest trends in propaganda—warned that “if Maduro is helped, so is Putin.”

A number of US House Democrats have grown increasingly vocal in opposing the administration’s Venezuela policy, based on its humanitarian consequences. Days before the timid overtures, they wrote yet another letter to Biden (The Hill, 5/12/22). But when it was time to evaluate the latest measure, this letter earned a grand total of one sentence in just one report (AP, 5/17/22).

Remarkably, even after the Biden administration decided to kick the can on Chevron’s license down the road until the midterms, outlets like the Associated Press (5/27/22) still only platformed the hardliners. And so, with next to no changes to Trump’s “maximum pressure” efforts, the corporate media audience will see the White House chastised for “bending over backward to appease an oil despot,” but not for causing a reported 30% of the Venezuelan population to be undernourished (Venezuelanalysis, 8/22/21). 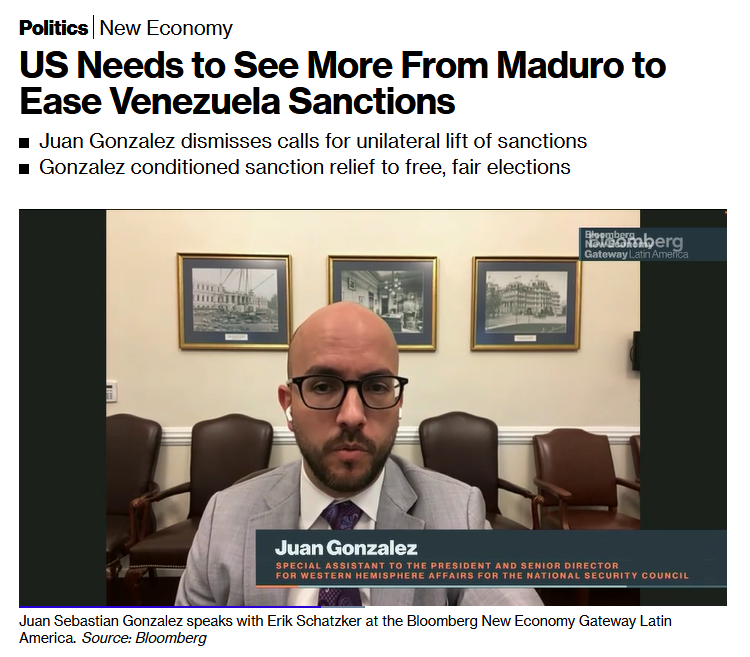 “The unilateral lifting of sanctions on Venezuela is not going to improve the lives of Venezuelans,” a senior White House advisor absurdly claimed to Bloomberg (5/19/22).

If Western journalists are not keen to tell their audience what sanctions have meant, they are even less eager to challenge outright falsehoods coming from high-ranking Beltway figures.

In a Bloomberg report (5/19/22), writers Patrick Gillespie and Erik Schatzker walked a familiar path by allowing senior White House advisor Juan Gonzalez to play hostage-taker, demanding that sanctions relief will require unspecified “democratic steps” and “bigger political freedoms.” But in the process, they published an outrageous and blatant lie.

The Venezuelan government, Venezuelan opposition figures/groups, UN special rapporteurs, think tanks, economists, US representatives and even the US Chamber of Commerce have documented or at least recognized the harmful consequences of unilateral sanctions. To not include a single one of these sources to counter Gonzalez’s ludicrous assertion is a choice that is as deliberate as it is dishonest.

The latest Venezuela appearance in the spotlight showed again just how key the corporate media is for US foreign policy. With their “calibrated” efforts to conceal the consequences of sanctions, Western journalists have in fact made thousands and thousands of Venezuelan victims invisible to the public. It is they who deserve to be sanctioned.

This content originally appeared on FAIR and was authored by Ricardo Vaz.