After Bernie Sanders and Alexandria Ocasio-Cortez, the country’s third-most powerful democratic socialist may be a former elementary school teacher you might never have heard of.

While Marc Elrich isn’t yet on the nation’s radar, he’s very much on the Washington Post’s. The paper tried desperately to stop him from becoming chief executive of Montgomery County, Maryland, an influential jurisdiction located just outside DC, smack dab in the heart of the Post’s coverage area. (Montgomery is “the state’s economic dynamo—a place where leadership and governance are consequential,” the Post notes.)

Despite the Post’s efforts, Elrich narrowly won the county executive seat in 2018. And now he’s standing for reelection, with a good shot at winning.

That’s an outcome the Post is determined to prevent, lest Elrich set a dangerous example: that a lefty can not only win, but govern so effectively that voters return him to office.

For the Post—a paper owned by the third-richest human alive, Amazon founder Jeff Bezos—scaremongering about lefties is job one. On a national level, that’s led to the Post’s hysterical coverage of Bernie Sanders. On a local level, it’s led to the paper’s attacks on Elrich. 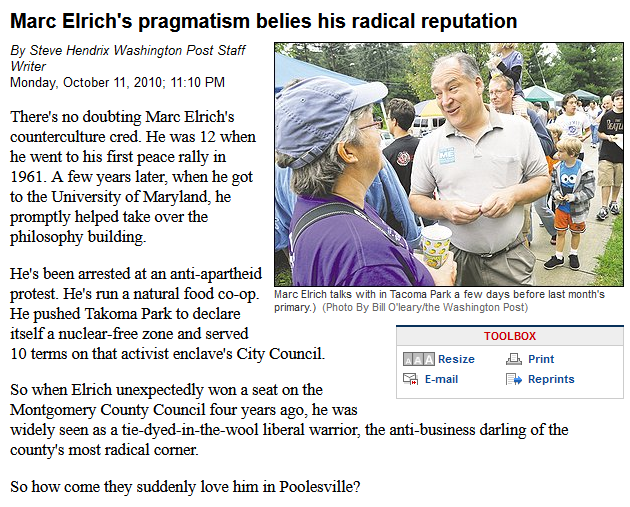 More than a decade ago, the Washington Post (10/11/10) was writing about “the evaporation of [Elrich’s] radical rep.”

It wasn’t always like this. There was a time, prior to the 2018 campaign, when a humanizing story about Elrich could appear in the Post. For example, an upbeat 2010 profile (10/11/10) began like this:

There’s no doubting Marc Elrich’s counterculture cred. He was 12 when he went to his first peace rally in 1961. A few years later, when he got to the University of Maryland, he promptly helped take over the philosophy building.

He’s been arrested at an anti-apartheid protest. He’s run a natural food co-op. He pushed Takoma Park to declare itself a nuclear-free zone and served ten terms on that activist enclave’s City Council.

The Post’s 2010 story went on to note how, after protesting the Vietnam War and marching for civil rights as a young man, Elrich became an elementary school teacher. “By the time he left [teaching] almost two decades later, he was legendary for bringing reluctant fourth- and fifth-graders to a love of numbers,” the Post wrote. “To this day, he’s the best math teacher my daughter ever had,” the parent of a former student told the Post. 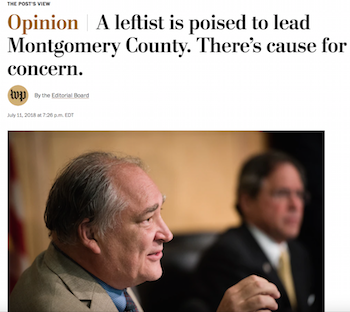 Calling Elrich “an outlier who proudly positioned himself on the ideological extreme left,” the Post (7/11/18) warned that “business and development leaders…are openly worried.”

The Post wrote this upbeat profile over a decade ago, at a time when Elrich was on the County Council. Back then, the Post was open to endorsing Elrich, as it did in both his 2010 and 2014 council reelection bids.

But once Elrich sought the county’s top post in 2018, things quickly turned sour. Suddenly, in the pages of the Post, Elrich became a Venezuela-hugging, Che Guevara–loving union shill, who’s “skeptical of capitalism” and “proudly…on the ideological extreme left.”

He “possesses an agile mind and a silver tongue,” which he uses to justify his extremism, the Post wrote of Elrich, who’s Jewish.

Leaving nothing to chance, in addition to its blistering personal attacks, the Post repeatedly warned Montgomery County voters they’d be inviting financial doom by voting for Elrich. “He would imperil the county’s economic and fiscal prospects,” the Post (9/29/18) claimed.

Still, Elrich eked by (in the Democratic primary, the key race in the deep blue county). His 2018 win so unnerved the Post that the paper swiftly sought to undermine not only Elrich, but the election itself.

Four days after the election, the Post (6/30/18) claimed, “The winner’s authority [will] be undercut.” The reason? The county’s elections were badly in need of reform, the Post suddenly determined, citing Elrich’s win as evidence. 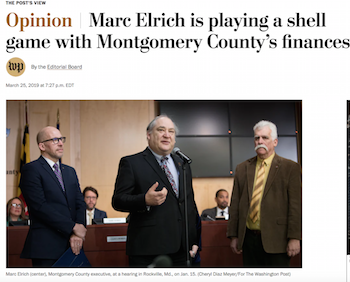 The Post (3/25/19) scoffed that Elrich supported pay increases for public workers “based on the bizarre logic that employees are somehow owed money for scheduled raises that were scrapped after the recession.”

In the intervening years the Post’s coverage of Elrich has proved remarkably consistent, and remarkably untethered from reality.

A year into his tenure, the Post (3/25/19) claimed Elrich’s “profligacy” was on full display as he “cannibalized tens of millions of dollars” to provide a “bouquet of roses for his union backers.” He’s playing a “shell game with Montgomery finances,” the Post continued, and “it will be difficult to pay for his fat labor contracts in coming years.”

This is how the Post, a newspaper with a history steeped in anti-unionism, talks about working people receiving previously negotiated pay increases.

Midway through his term, and now amid a pandemic, Elrich was still at it, “lavishing major pay increases on thousands of county employees,” the Post (8/30/20) decried. Sure, frontline workers risking their lives to keep the county running deserved a little something extra, the Post relented. But Elrich was only going on a “spending spree” so he could repay the unions that were “key to his election,” the Post insisted.

As a result, Elrich was inviting financial ruin, the Post (8/30/20) claimed for the umpteenth time:

How will Mr. Elrich pay the bill? Will he raid the county’s reserves, thus jeopardizing Montgomery’s bond rating and, in the process, its ability to borrow cheaply? Will he divert funds… [meant for] individuals struggling to pay rent?… Unlike the federal government, Montgomery cannot print money. 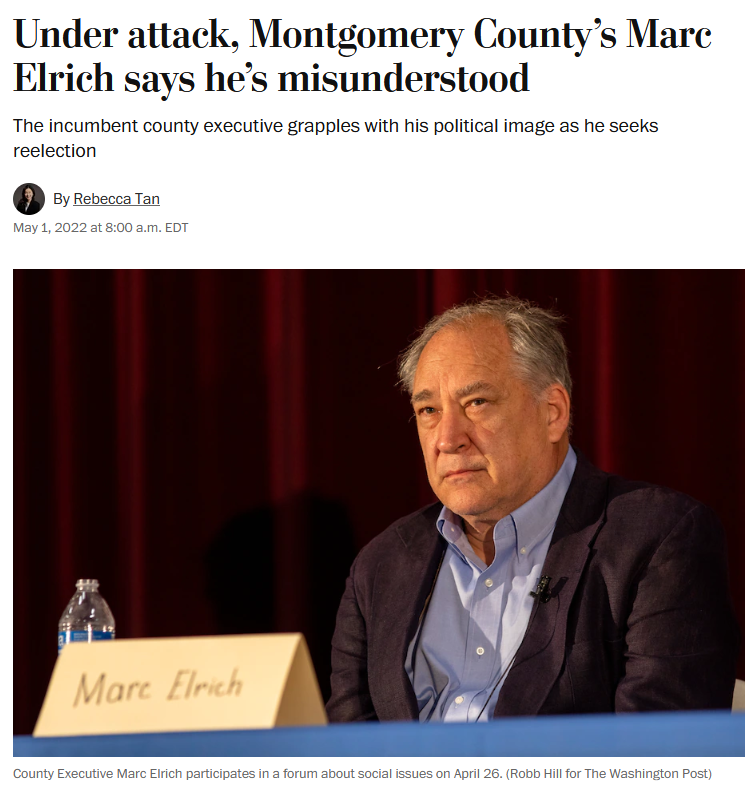 The Washington Post (5/1/22) says “Elrich is struggling to defend a record he says is misunderstood.”

After four straight years of insisting Elrich was bankrupting the county, how does the Post now explain to readers that Montgomery is, in fact, in good financial shape? The answer: carefully.

Buried down in the 18th paragraph of a recent profile of Elrich, the Post (5/1/22) admits: “The worst fears about Elrich have not materialized in his first term.”

The cleverest part of the Post’s half-assed admission is the last four words—“in his first term”—which pivots readers’ attention away from Elrich’s successful first term and towards an imagined “worst fears” second term.

Of course, by the time readers make it to the 18th paragraph, Elrich’s unfitness for office is not in doubt. The opening graph alone paints Elrich as barely civilized: “He doesn’t care for wearing neckties or cleaning up for pictures, he’s nonchalant about fundraising and he’s known for rambling.” And the next sentence calls him “a divisive figure” with “a devoted army of supporters.”

The Post’s profile gets even more slanted thanks to its quotes. It’s amazing how, in a county of 1.1 million residents, the Post can no longer seem to find anyone who has anything clearly positive to say about Elrich.

The closest the Post came in its May profile was a quote from Tony Hausner, a longtime Elrich supporter, who said, Elrich “is not a salesman. He doesn’t try to sell you on himself.” Which is not exactly a ringing endorsement.

Meanwhile, another supporter, Scott Schneider, a retired labor organizer, is quoted as saying Elrich’s communication skills are a “handicap.”

Not even the union leader quoted could come up with two nice words to say about the man. “Absent a scandal,” said Ginno Renne, who heads the union representing most of the county’s employees, “Montgomery County voters don’t have a tradition of turning out incumbents.”

Seeing words like “scandal” and “handicap” appear in purportedly favorable quotes, I decided to reach out to the three quoted Elrich supporters to see if they’d given the Post more than backhanded-at-best comments about Elrich. And it turns out they had.

“I said a lot of positive things about Marc, and I was floored that she didn’t include any of those things,” Hausner said of Rebecca Tan, the Post reporter who wrote the May profile of Elrich.

Among the chief issues Hausner said he raised with Tan was Elrich’s effective leadership amid the pandemic. The other two Elrich supporters said the same.

Schneider, the former labor organizer, is so jaded by the Post’s coverage over the years that he wasn’t surprised by the profile. “The Washington Post has never been very sympathetic or favorable to Marc,” he said.

Schneider attributed the Post’s dislike of Elrich, at least in part, to their differing approaches to development. The Post’s “build, build, build” approach is the local version of “drill, baby, drill,” he said.

Elrich, on the other hand, prefers to protect and create affordable housing in a more direct manner (like progressive New York legislators are doing), rather than by providing taxpayer giveaways to developers. This has earned Elrich the ire of developers—and the Post. 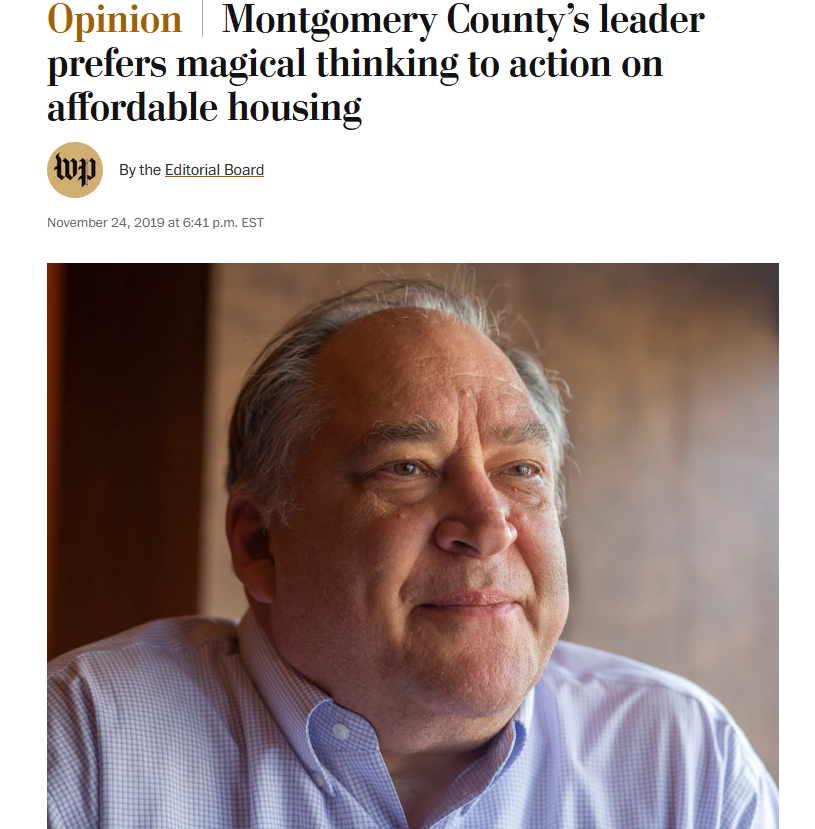 Elrich’s “magical thinking” is inviting a future in which Montgomery County may be “plagued with problems like San Francisco’s and Seattle’s—gilded playgrounds for the rich where middle-income residents are banished and the poor forced onto the streets,” the Post (11/24/19) declared.

While Elrich spent the past decades fighting against social inequities, for far longer the Post has been teaming up with developers to turn DC into the very gilded playground it now (wrongfully) attributes to Elrich’s policies.

A little history is in order.

The Graham family—which owned the Post for eight decades before selling the paper to Bezos in 2013—wasn’t content to merely advocate for the removal of DC’s Black population in the pages of its powerful newspaper. So in 1954, a time when DC had no local governance of its own, Post publisher Phil Graham created a shadow government consisting of himself and downtown white business owners. The explicit goal of the group, called the Federal City Council, was to remove African Americans from DC. And they were so successful that five years later, on a tour of the targeted area near the US Capitol, former first lady Eleanor Roosevelt asked, “What has happened to the people who once lived here?”

Today, the Post is the only game in town, so it can whitewash its own ugly history. This leaves the paper free to claim the moral high ground, even on housing issues, and even against someone like Marc Elrich, who’s dedicated his life to fighting the very injustices the Post has long orchestrated.

Returning to the Post’s May profile of Elrich: In addition to Schneider and Hausner, I also spoke with Gino Renne about what he told the Post.

“There was a lot more conversation than that one quote,” the labor leader told me. “Of course, they always try to pick out, I guess, the most controversial or most bombastic quote.”

The post A Socialist in WaPo’s Suburbs appeared first on FAIR.

This content originally appeared on FAIR and was authored by Pete Tucker.