On 26 March 2018, Canada’s prime minister Justin Trudeau spoke of the six Tsilhqot’in chiefs who were arrested during a sacred peace-pipe ceremony and subsequently hanged for their part in a war to prevent the spread of smallpox by colonialists: “We recognize that these six chiefs were leaders of a nation, that they acted in accordance with their laws and traditions and that they are well regarded as heroes of their people.”

“They acted as leaders of a proud and independent nation facing the threat of another nation.”

“As settlers came to the land in the rush for gold, no consideration was given to the rights of the Tsilhqot’in people who were there first,” Trudeau said. “No consent was sought.”

In recent years, the Tsilhqot’in people were engaged in a long, drawn-out fight to gain sovereignty over their unceded territory, spurred by the attempts of Taseko Mines to situate an open-pit copper-and-gold mine near the trout-rich Teẑtan Biny (Fish Lake). Also proposed was “destroying Yanah Biny (Little Fish Lake) and the Tŝilhqot’in homes and graves located near that lake, to make way for a massive tailings pond.”

Sometimes the law works (even colonial law), and sometimes it doesn’t. Neither the Tsilhqot’in or Delgamuukw legal precedents have, so far, buttressed the Wet’suwet’en people’s fight against the encroachment of a pipeline corporation.

In the unceded territory of the Wet’suwet’en First Nation, corporate Canada and the government of Canada are violently seeking to ram a pipeline through Wet’suwet’en territory despite its rejection by all five hereditary chiefs; i.e., no consent has been given for the laying of a pipeline.

The Gidimt’en land defenders of the Wet’suwet’en turned to the international forum and made a submission to the United Nations Human Rights Council’s Expert Mechanism on the Rights of Indigenous People on the “Militarization of Wet’suwet’en Lands and Canada’s Ongoing Violations.”  The submission was co-authored by leading legal, academic, and human rights experts in Canada, and is supported by over two dozen organisations such as the Union of BC Indian Chiefs and Amnesty International-Canada.

The submission to the UN was presented by hereditary chief Dinï ze’ Woos (Frank Alec), Gidimt’en Checkpoint spokesperson Sleydo’ (Molly Wickham), and Gidimt’en Checkpoint media coordinator Jen Wickham. It makes the case that forced industrialization by Coastal GasLink and police militarization on Wet’suwet’en land is a repudiation of Canada’s international obligations as stipulated in the UN Declaration on the Rights of Indigenous Peoples (UNDRIP).

Ongoing human rights violations, militarization of Wet’suwet’en lands, forcible removal and criminalization of peaceful land defenders, and irreparable harm due to industrial destruction of Wet’suwet’en lands and cultural sites are occurring despite declarations by federal and provincial governments for reconciliation with Indigenous peoples. By deploying legal, political, and economic tactics to violate our rights, Canada and BC are contravening the spirit of reconciliation, as well as their binding obligations to Indigenous law, Canadian constitutional law, UNDRIP and international law.

We urge the United Nations to conduct a field visit to Wet’suwet’en territory because Canada and BC have not withdrawn RCMP from our territory and have not suspended Coastal GasLink’s permits, despite the United Nations Committee on the Elimination of Racial Discrimination calling on them to do so. Wet’suwet’en is an international frontline to protect the rights of Indigenous peoples and to prevent climate change. Yet we are intimidated and surveilled by armed RCMP, smeared as terrorists, and dragged through colonial courts. This is the reality of Canada.

In the three large-scale police actions that have transpired on Wet’suwet’en territory since January 2019, several dozens of people have been arrested and detained, including legal observers and media. On 13 June 2022, the Unist’ot’en Solidarity Brigade expressed outrage that the BC Prosecution Service plans to pursue criminal contempt charges against people opposed to the trespass of Wet’suwet’en territory, including Sleydo’.

The Wet’suwet’en are on their ancestral unceded lands. Would it have made a difference if they had signed a treaty with the colonial entity? 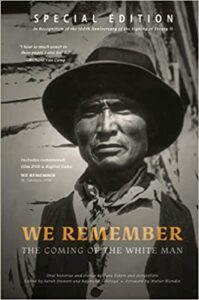 The book We Remember the Coming of the White Man (Durville, 2021), edited by Sarah Stewart and Raymond Yakeleya, does not augur a better outcome for the First People.

We Remember adumbrates how the treaty process operates under colonialism:

When our Dene People signed Treaty 11 in 1921, there had been no negotiation because the Treaty translators were not able to translate the actual language used in the document. There was not enough time for our People to consult with each other. Our Dene People were given a list that had been written up by bureaucrats declaring the demands of Treaty 11. They dictated to the Dene, ‘This is what we want. You have to agree, and sign it.’ We did not know what the papers contained. (p ix)

Treaties and contracts signed under duress are not legally binding. Forced signing of a treaty is on-its-face preposterous to most people with at least half a lobe. It is no less obvious to the Dene of the Northwest Territories:

How can you demand something from People who cannot understand? That’s a crime. I have often said that Treaty 11 does not meet the threshold of being legal. In other words, when we make a treaty, it should be you understand, I understand, and we agree. In this case, the Dene did not understand. (p x)

Unfortunately, the Dene trusted an untrustworthy churchman. The Dene signed on the urging of Bishop Breyant, a man of God, because they had faith in the Roman Catholic Church. (p x)

Oil appeals to those with a lust for lucre. This greed contrasts with traditional Dene customs. Walter Blondin writes in the Foreword,

We Dene consider our land as sacred and owned by everyone collectively as it provides life…. [T]here were laws between the families that insured harmony and sharing. No one was left behind to face hardships or starve when disasters such as forest fires devastated the lands. The Dene laws promoted sharing, and this was taken seriously as failure to follow these laws could lead to war and bloody conflict. (p 3)

The Blondin family of Norman Wells (Tlegohli) in the Northwest Territories experienced first hand the perfidy of the White Man. The Blondins gave oil samples from their land to the Roman Catholic bishop for testing. The Dene family never received any report of the results. Later, however, a geologist, Dr Bosworth staked three claims at Bosworth Creek that were bought by Imperial Oil in 1918. (p 5-6)

Imperial Oil told the families: “You are not welcome in your homes and your traditional lands and your hunting territory.” The Dene people were driven out. “Elders say, ‘It was the first time in living memory where the Dene became homeless on their own land.'” (p 6)

The Blondin family homes were torn down with possessions inside and pushed over the river bank. “No apology or compensation was ever received from Imperial Oil. Imperial Oil considered Norman Wells to be ‘their town—a White Man’s town’ and the Blondin family and other Dene were not welcome.” (p 6)

“One hundred years after the fact, the Dene can see the collusion between the British Crown, Imperial Oil [now ExxonMobil] and the Roman Catholic Church in the fraud, theft and embezzlement of Dene resources.” (p 10)

Sarah Stewart writes, “Treaty 11 was a charade to legitimize the land grab in the Northwest Territories.” The land grab came with horrific consequences. Stewart laments that the White Man brought disease, moved onto Dene lands and decimated wildlife, and that the teaching of missionaries and missionary schools eroded native languages, cultures, and traditions. (p 14)

Indigenous People, whose land it was, were never considered equal partners in benefiting from the resource. As Indian Agent Henry Conroy wrote to the Deputy General of Indian Affairs in January 1921, the objective was to have Indigenous people surrender their territory ‘to avoid complications in the exploitation of oil.’ (p 15)

Filmmaker Raymond Yakeleya elucidates major differences between the colonialists and the Dene. He points to the capitalist mindset of the White Man: “‘How can we make money off this?’ Dene People are not motivated by that.” (p 24) A deep respect and reverence for all the Creator’s flora and fauna and land is another difference. “When you kill an animal, you have a conversation with it and give it thanks for sharing its body. There are special protocols and ceremonies you have to go through.” (p 28)

While Yakeleya acknowledges that not all missionaries were bad, (p 30) he points to a dark side:

A major confusion came to our People with the coming of the Catholic missionaries. I see the coming of the Black Robes as being a very, very dark cloud that descended over our People. All of a sudden you have people from another culture with another way of thinking imposing their laws. We see that they did it for money, control, and power. I heard an Elder say to me once that the Christians who followed the Ten Commandments were the same people who broke all of them.

The first time we ever questioned ourselves was with the coming of the Christians and to me, I think there was something evil that came amongst our People…. The missionaries were quick to say our ways were the ways of the devil, or the ways of something not good…. Now we see they are being charged with pedophilia and other crimes. (p 29)

As for the discovery of oil, Joe Blondin said, “The Natives found it and never got anything out of it and that’s the truth.” (p 159) As for Treaty 11, John Blondin stated emphatically, “We know that we did not sell our land.” (p 171)

If your nation chooses … to continue to try and destroy our nation, then I hope you will understand why we are willing to fight so that our nation can survive. It is our world…. But we are willing to defend it for ourselves, our children, and our grandchildren. If your nation becomes so violent that it would tear up our land, destroy our society and our future, and occupy our homeland, by trying to impose this pipeline against our will, but then of course we will have no choice but to react with violence. I hope we do not have to do that. For it is not the way we would choose…. I hope you will not only look on the violence of Indian action, but also on the violence of your own nation which would force us to take such a course. We will never initiate violence. But if your nation threatens by its own violent action to destroy our nation, you will have given us no choice. Please do not force us into this position. For we would all lose too much. (p 229)

The Nature of Colonialism and Its Treaties

sharpened assurances that this is now
how it is

take it on good faith
and accept it

did no one hear?
did god mumble?

but the things that were done
were not love

our nation is built above the bones
of a genocide

The post It is Not Love that Abandons Its Treaties first appeared on Dissident Voice.