The New York Times (6/10/22) reported on NYC Mayor Eric Adams’ first budget agreement, saying it “excludes…proposals to significantly increase staffing levels at the city’s jails…[and] increase the Police Department’s budget.” This is the culmination of a fierce debate, the Times told readers, between a mayor with “politically moderate roots” and a progressive city council “over how best to confront rising concerns about crime.”

The Times article, by Jeffery C. Mays and Dana Rubinstein, framed the budget as mainly an issue of law enforcement priorities rather than a question of austerity. Even though there is no looming fiscal emergency, the mayor has cut school budgets, homeless services and mental health services (Gothamist, 6/14/22). Critics blasted the fact that while police funding remained flat, spending for other services were cut (Politico, 6/17/22). The mayor had received backlash from lawmakers (Gotham Gazette, 3/2/22) over his desire to cut other city agencies while sparing the cops.

But the Times piece ignored the cuts to education altogether, even though the conservative New York Post (6/10/22) mentioned how the mayor was forced to talk about a $31 billion cut to schools when pressed by reporters. The Post (6/13/22) went so far as to give the issue of education cuts a whole article.

The Times coverage, by contrast, was completely one-sided in its coverage of the budget deal. While it included one dissenter saying the deal didn’t set aside enough for the city’s rainy day fund, it featured no criticism of cuts to other vital city agencies. The Times only covered the schools cuts days later (6/15/22), burying the news in a piece that framed opposition to the budget around Rep. Alexandria Ocasio-Cortez, a deceptive frame that portrayed anger against the budget cuts as intra-party squabbling rather than citizen outrage. 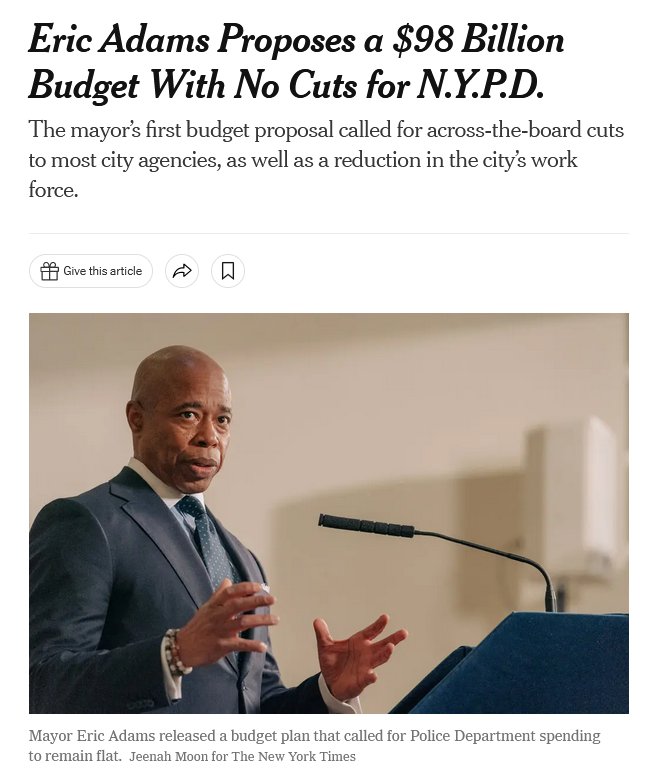 Interestingly, before Adams took office, the Times (12/31/21) complained about the previous mayor’s “costly legacy” of expanding the city workforce, suggesting that Adams “might have to rein it in.” In a way, the vanguard paper of urban liberalism foresaw and celebrated a neo-Reaganite rollback of the previous administration’s social democratic agenda.

And it’s not like the city is lacking in dissident voices regarding the budget. NYC Democratic Socialists of America co-chair Sumathy Kumar said in a statement (Twitter, 6/10/22), “By cutting funding for schools and housing when the city is flush with resources, Mayor Adams’ first budget fails working-class New Yorkers.”

Brooklyn elementary special education teacher Annie Tan, noting that her own school could lose more than 12 staffers,  told FAIR: “It is devastating to the school’s culture to lose that many educators…. The budget cuts mean a loss of staff, experts at what they do.” She added, “It’s the media’s responsibility to make that real.”

The Times (2/16/22) had previously reported on the mayor’s initial budget proposal as a tough-on-crime agenda.  Reporter Emma G. Fitzsimmons admitted that it called for cuts to the rest of city services, while also admitting that the city was far from broke: The budget “projected that it would receive $1.6 billion more tax revenue in the current fiscal year than originally forecast, because of higher than expected personal and business income taxes, sales taxes and transaction taxes.” Meanwhile, “higher property tax values contributed to a $726 million increase in revenue for the next fiscal year.”

‘Hailed as a national leader’ 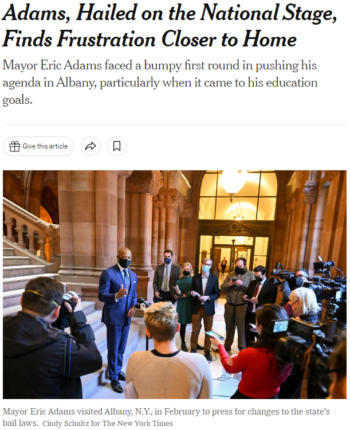 This framing of the budget agreement came after the Times (6/3/22) previously lamented that the moderate Adams was having difficulty pursuing his agenda because of progressive lawmakers in Albany, framing those lawmakers as out of touch. Adams, Fitzsimmons pointed out, “was hailed as a national leader in the Democratic Party.”

Hailed by whom? The Times never told us, although a number of national outlets have perpetuated this idea, reporting that Adams has been meeting with national party leaders (Politico, 5/20/22) and that he is considering a presidential run (Fox News, 5/21/22).

Both of these developments are overhyped. It’s normal for big city Democratic mayors to have relationships with top party leaders. And each of the last three mayors–Bill de Blasio, Michael Bloomberg and Rudy Giuliani–ran for president, with none of them coming within spitting distance of a party nomination. Adams’ job performance polling is all over the place, with CBS (6/7/22) recently reporting poor polling numbers, and the New York Post (6/8/22) admitting that even while approving of his charismatic style, respondents still disliked his results.

What’s clear is that the Times leadership certainly thinks Adams is a national leader, even if there is little evidence for this. A decision to frame Adams’ first budget agreement as a sensible approach to the issue of crime, rather than a conservative scaling-back of city services and employment, fits in that kind of editorial judgment.

Why is crime the central framing of the budget story? Yes, crime is a major concern for many New Yorkers (Spectrum News, 4/25/22), but as FAIR (6/21/21) has noted, crime is a major factor largely because local media have overhyped crime in their coverage. And in her criticism of the budget, City Council Member Tiffany Cabán noted that the budget kept the city’s “current bloated levels of funding for policing and incarceration intact,” adding that the budget “fails to increase funding to data-driven, community-based violence prevention programs.” 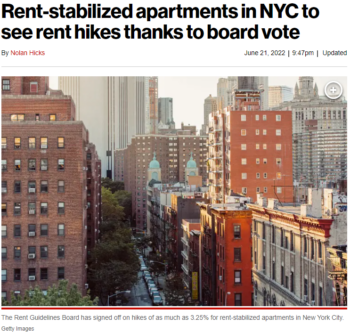 The Times’ lack of focus on critical issues has not gone unnoticed. “It’s infuriating that the media are going towards that, and I think it’s because the mayor has shown himself to be retaliatory,” Tan said, referring to Adams’ penchant for going after critics in the media (New York Post, 2/16/22, 6/5/22). She added that the media are making the calculation that if “they piss off Mayor Adams, he will not speak to them, and that they will lose the ability to speak to him for a news story.”

Consider the context. The Rent Guidelines Board appointed by Adams approved “hikes of as much as 3.25% for new one-year leases for the Big Apple’s roughly 1 million rent-stabilized apartments,” while “new two-year leases for rent-stabilized units can jump by 5%” (New York Post, 6/21/22). Unless Adams is contemplating above-inflation wage increases for city workers in the near future, these kinds of hikes herald a regime of fiscal austerity, one that will hit non-wealthy residents the hardest.

The Times should not be acting as a public relations arm for City Hall as it pushes an austerity agenda. Nor should it attempt to prop up a “moderate” mayor as a national leader.

ACTION ALERT: You can send a message to the New York Times at letters@nytimes.com (Twitter: @NYTimes). Please remember that respectful communication is the most effective. Feel free to leave a copy of your communication in the comments thread.