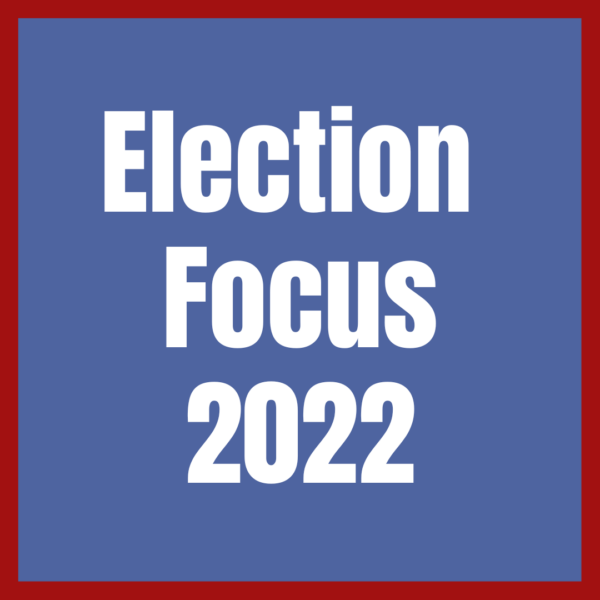 San Francisco voted on June 7 to recall its district attorney, Chesa Boudin, a reformer who had challenged the traditional “lock ’em up” policies of big-city prosecutors. The margin was initially reported as a lopsided  61%–39% landslide, in what major news media across the country reported as a blow to progressive Democrats.

As New York Times reporter Thomas Fuller, in an article published the day after the election (6/8/22), put it, under a headline declaring “Voters in San Francisco Topple the City’s Progressive District Attorney, Chesa Boudin”:

Voters in San Francisco on Tuesday put an end to one of the country’s most pioneering experiments in criminal justice reform, ousting a district attorney who eliminated cash bail, vowed to hold police accountable and worked to reduce the number of people sent to prison.

Chesa Boudin, the progressive district attorney, was removed after two and a half years in office, according to the Associated Press, in a vote that is set to reverberate through Democratic politics nationwide as the party fine-tunes its messaging on crime before midterm elections that threaten to strip Democratic control over Congress.

‘Decisively to the right’ 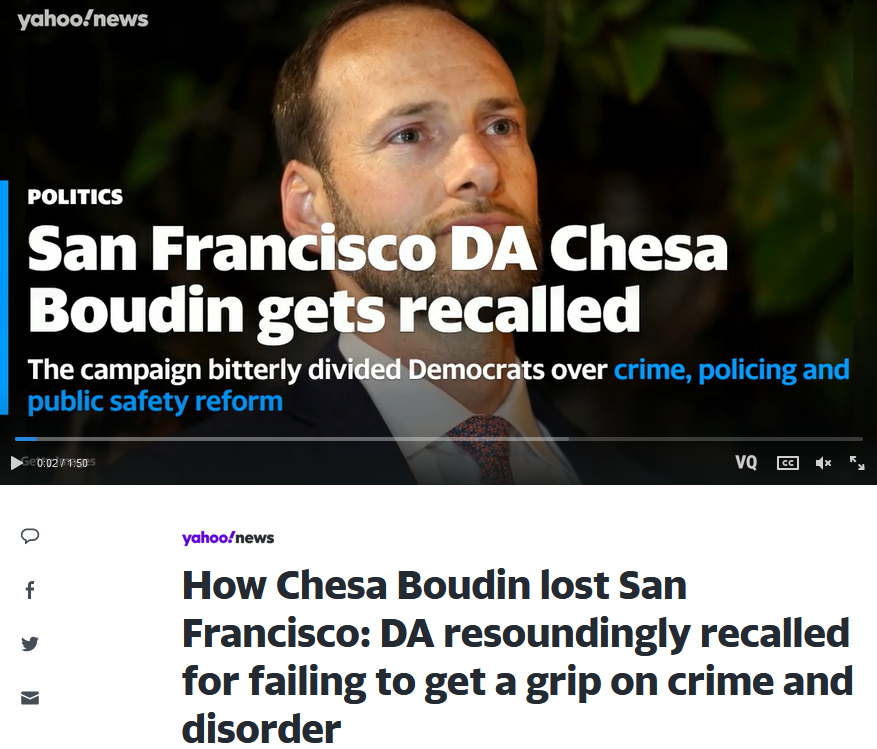 Yahoo (6/8/22): “Statistics failed to persuade voters who routinely had to step over the broken glass of car windows, human excrement and drug paraphernalia.”

The Times wasn’t alone in portraying San Francisco’s successful DA recall as a watershed moment for the United States, with progressive voters allegedly turning against police and prosecutor reforms in favor of “tough on crime” policies.

Yahoo News White House correspondent Alexander Nazaryan (6/8/22) termed the recall a “decisive” defeat, predicting that it was “sure to reverberate nationwide.” Nazaryan wrote that the recall election result represented

a reprise of February’s successful effort by San Franciscans to recall three school board members who were seen as engaging in progressive cultural issues while doing little to open schools that had been closed by the coronavirus pandemic.

Citing that earlier recall, as well as the latest LA Democratic mayoral primary that sent billionaire realtor Rick Caruso, a former Republican, into a runoff against progressive Rep. Karen Bass, he wrote,  “In both cases, Left Coast voters moved decisively to the right.” He then quoted (without naming him) Democratic strategist Garry South, who has also represented the real estate and telecom industries: “People are not in a good mood, and they have reason not to be in a good mood. It’s not just the crime issue. It’s the homelessness. It’s the high price of gasoline.”

Wait a minute, though. District attorneys aren’t responsible for dealing with homelessness, nor do they have anything to do with gasoline prices!  Does this even qualify as political analysis? 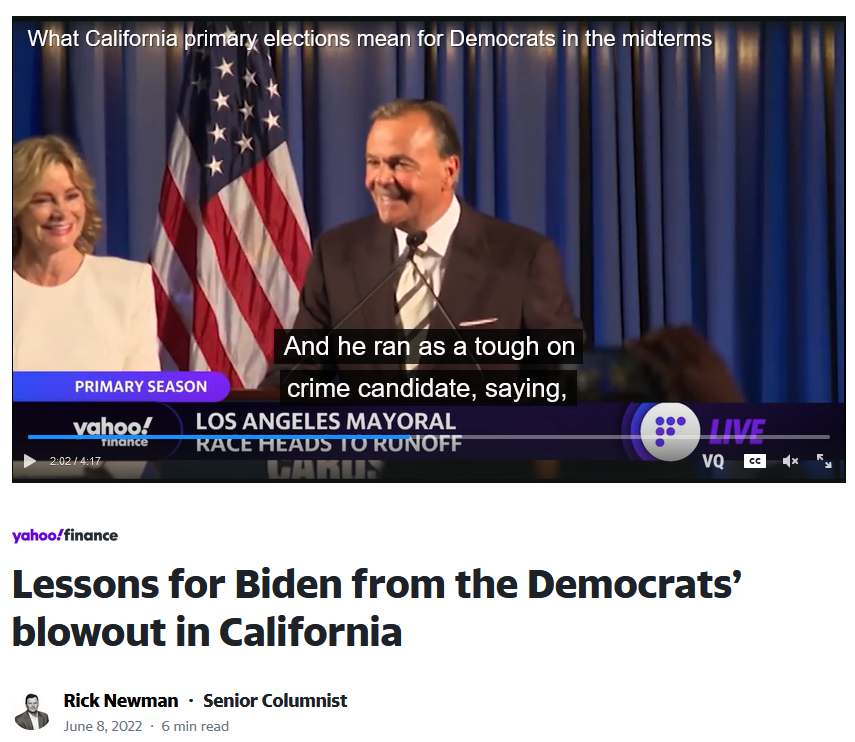 Like many news organizations ready to find meaning in Boudin’s recall, the New York Times and Yahoo News were so excited by the result they jumped the gun in saying that he had suffered a rout. Once all the absentee and mail-in ballots were counted a few days later, Boudin had actually lost not by a 22-point margin but by a less overwhelming 10 percentage points—a 55%–45% vote.

Since Boudin only won election in 2019 in a 50.8%–49.2% runoff, he hadn’t actually lost that much support over his almost three years in office.

Yahoo‘s Nazaryan was also caught flat-footed by reaching his “progressives are getting whupped” conclusion too early in the LA mayoral primary vote count. His report had ex-Republican Caruso leading Bass by 5 percentage points on the evening of the voting, but by Friday, when nearly all the mail-in votes had been tallied, the LA Times (6/17/22) was reporting that lead had flipped, the election had flipped, with Bass, running on a police-reform platform, enjoying a definitive lead of 6 percentage points. (Bass, whose final lead was 7 points,  will face Caruso in a November runoff.) Other progressives running for LA’s city council also did well as mail-in ballots poured in following primary day.

The really dramatic margin in the Boudin recall was in the money shoveled into the “Yes” vote. Neither the New York Times nor Yahoo—nor, indeed, most news reports on the Boudin recall—even mentioned the massive financing behind the recall effort.

They should have. Since money and media are so important—and so corrupting—in US elections, it’s important for the public to know who’s behind such campaigns.

The San Francisco Chronicle did a creditable job of covering the recall campaign, endorsed Boudin in an editorial (4/23/22) and reported less apocalyptically on the results than leading national news media. The hometown paper (6/7/22) reported that recall supporters—primarily wealthy donors from real estate and venture capitalist companies, as well as wealthy doctors and lawyers—raised and spent a stunning $7.2 million to oust Boudin. It also noted that the bundler who donated a whopping $4.7 million of that total showed an average contribution of $80,000. Boudin’s campaign to defeat the recall raised only $3.3 million, most of that reportedly coming from small donors.

Perhaps national news organizations felt that it was okay to focus on the Boudin recall because of his celebrity/notoriety—based on being the child Kathy Boudin and David Gilbert, two Weather Underground members who were convicted of murder for participating in a lethally botched Brinks robbery in 1981. Chesa Boudin, born in 1980, was raised by two Weather Underground founders, Bill Ayers and Bernadine Dohrn.

But even if that could justify their focus, publications should have provided some contradictory evidence to their shaky theory of progressives losing their passion for criminal justice reform. One major counterexample is the big re-election win in 2021 by Philadelphia’s District Attorney Larry Krasner, a former public defender and defense attorney, and perhaps an even more radical reformer than Boudin. 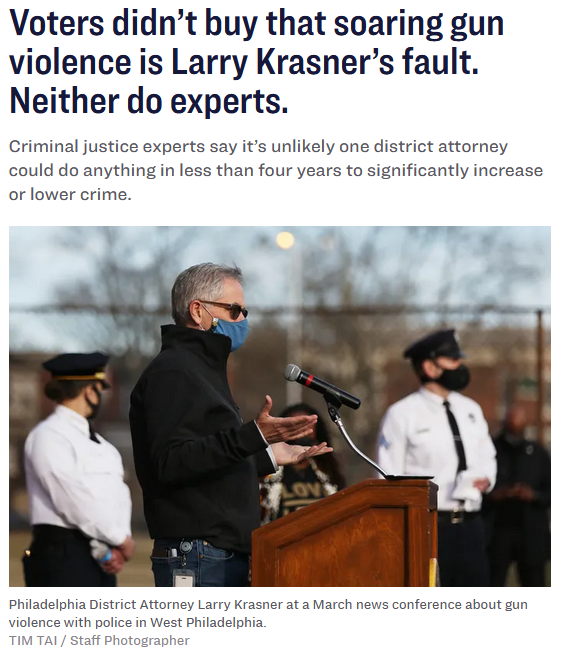 While Pennsylvania doesn’t have recall votes, Krasner was challenged both in the spring Democratic primary and in the November general election by former assistant DAs he had fired in a big clean-out of hard-line prosecutors hired by his predecessors. According to Ballotpedia (which gives final results), he trounced his primary opponent, former Assistant DA Carlos Vega, winning  by a 65/35% margin. Vega was heavily funded by big donors, with Philadelphia’s traditionally powerful police union, the Fraternal Order of Police, his biggest donor,

Krasner then went on last November to defeat Republican candidate and former Assistant DA Chuck Peruto, also a big recipient of FOP money and support, winning by 69/31%. That’s not that much lower than his 75% blowout win in his first election to DA, and surely doesn’t suggest that Democratic voters and independents are souring on progressive prosecutors in Philadelphia.

Even the Philadelphia Inquirer (5/20/21), which had been hard on Krasner through his first term and this past election season, had to admit after his re-election that there was little reason to believe that he was responsible for the rise in gun violence:

Philadelphia’s rise in shootings and homicides began in 2015, three years before Krasner took office. And while gun violence has indeed skyrocketed during the pandemic, that’s happened across the country and Philadelphia’s increase hasn’t been worse than other cities.

As the Inquirer article  put it, “One reason the anti-Krasner argument didn’t stick may be that there’s little evidence to back it up.” 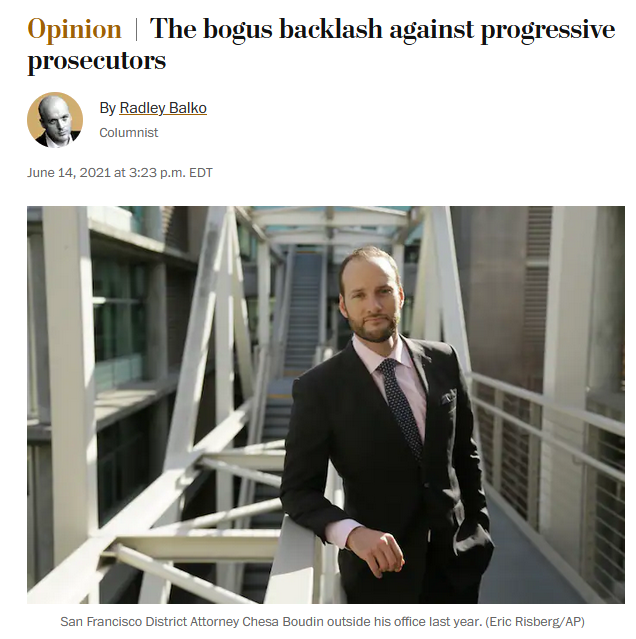 Amid all the drivel published about the purported significance of a multi-million-dollar recall campaign taking out Boudin, kudos to the Washington Post for running a column by cop-turned-journalist Radley Balko (6/14/22), which noted that many of the claims made against Boudin were untrue:

Ultimately, the case against Boudin rests on two assumptions: that crime in the city has exploded and that Boudin isn’t charging people at the rate his predecessors did. And neither of those assumptions is true. There’s also little evidence that progressive policies such as ending cash bail or refusing to charge low-level offenses have anything to do with the spike in violence nationwide. The 2020 figures are expected to show a homicide surge coast to coast, in rural areas and urban areas, in jurisdictions with both reform-minded radicals and law-and-order stalwarts in the DA’s chair.

The post Turning a San Francisco Recall Into Rout for Police Reform appeared first on FAIR.

This content originally appeared on FAIR and was authored by Dave Lindorff.