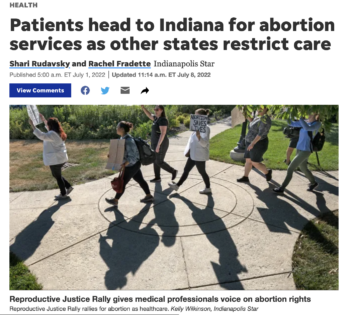 A July 1 article in the Indianapolis Star about a 10-year-old Ohio girl seeking an abortion in Indiana sparked public outrage—and right-wing media denials.

The story of a ten-year-old child rape victim from Ohio who sought an abortion across the state line in Indiana caught fire in US media, and around the world, after President Joe Biden (7/8/22) brought it up in public remarks. Given the difficulty of defending a law and a culture that produces such a horrific situation, the right wing went into overdrive attacking the story’s veracity.

While Murdoch outlets like these led the way, Washington Post “Fact Checker” Glenn Kessler (7/9/22) jumped into the fray as well to cast doubt on the Indianapolis Star‘s reporting on the matter. Now that charges have been filed in the rape case, Kessler and the right-wing media have mud on their faces—but they refuse to apologize, or to acknowledge the misdirection their pieces caused.

The story was originally reported in the Star on July 1 by Shari Rudavsky and Rachel Fradette as one example of people seeking abortions in Indiana from Ohio and Kentucky. In the piece, the journalists described how an Indianapolis obstetrician/gynecologist received the 10-year-old patient as a referral from a child abuse doctor in Ohio, where the state had recently banned nearly all abortions.

The story’s “one source” happened to be the doctor who performed the abortion—and who spoke on the record.

Under the headline “A One-Source Story About a 10-Year-Old and an Abortion Goes Viral,” the Washington Post‘s Kessler wrote that “the only source cited” was the doctor: “She’s on the record, but there is no indication that the newspaper made other attempts to confirm her account.”

Kessler said the Star wouldn’t give him any more information, and the doctor “declined to identify to the Fact Checker her colleague or the city where the child was located.” Nor did Kessler’s “spot check” of Ohio child service agencies turn up any confirmation of such a case.

Why the Star or the doctor should not feel obligated to disclose sensitive and confidential information about a minor to Glenn Kessler is presumably clear to everyone besides Glenn Kessler. But it is surprising that his column made it past Washington Post editors without anyone pointing out that, given privacy considerations in cases of rape and child abuse, a lack of confirmation by “spot check” suggests essentially nothing about the credibility of the initial report—or that “single source” reporting is quite typical in journalism.

In fact, even Kessler’s own paper will publish information from a single anonymous source, depending “on the source’s reliability and the basis for the source’s information.” It’s disingenuous for Kessler to suggest that the the abortion story is problematic purely on the basis of it having a single source.

Indeed, just a few months earlier, in a factcheck (3/6/22) about a quote attributed to Ukrainian President Volodymyr Zelenskyy that had one, anonymous source, Kessler considered the credibility of both the reporter (“a well-sourced former Marine”) and the source: “The attribution was a single source, but on the surface it appears to be a good one — a senior US official ‘with direct knowledge of the conversation.’”

Those are considerations he didn’t bother to extend to the Indy Star reporters—one of whom is a 17-year veteran at the paper—or their source. Kessler did note in the Zelenskyy piece that “still, it’s just one source,” but his conclusion approvingly nodded to Zelenskyy’s press secretary’s comment that “the quote, even if not accurate, reflects the moment.” And it’s the only other column FAIR could find in the Post archives in which Kessler even takes up the issue of a story being based on a single source. 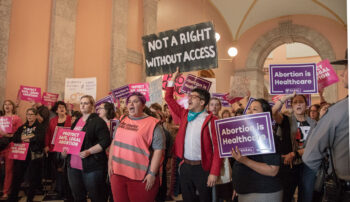 Finally, Kessler noted that an abortion for a 10-year-old “is pretty rare,” since data show that in 2020, “52 people under the age of 15 received an abortion in Ohio.” In other words, a case comparable to the one reported by the Star happens, on average, every single week in Ohio. Yet Kessler takes that as evidence against the likelihood of this incident reported by a doctor being true, rather than as evidence that even if this particular case were somehow false, child rape victims in Ohio will certainly be forced on a regular basis to either carry their pregnancies to term or seek abortions in other states.

Instead, after casting doubts left and right, Kessler concluded, “This is a very difficult story to check”:

With news reports around the globe and now a presidential imprimatur, however, the story has acquired the status of a “fact” no matter its provenance. If a rapist is ever charged, the fact finally would have more solid grounding.

In other words, though Kessler was able to dig up no disconfirming evidence, and, as he admitted later, some agencies he “spot checked” never even got back to him, an on-the-record statement by the doctor who performed the abortion does not give the story “solid grounding”—but an arrest warrant would.

Think about that. The patient’s doctor would clearly know 1) the patient’s age, and therefore whether this was a rape case; 2) whether a fetal heartbeat was detectable, and therefore whether the abortion would have been illegal in Ohio; and 3) whether the abortion in fact took place. For the story to not check out, the doctor—who again, spoke on the record—would have to be flat-out lying.

A police source, on the other hand, would have only secondhand knowledge of the case: whether someone reported the rape, and whether the police department had, as a result, filed any charges in the case. Oh, and by the way, we know that, as reliable sources go, police rank somewhere south of five-year-olds.

Kessler’s standard ignores that fewer than a third of rapes are reported to police, and fewer than 6% result in an arrest (Washington Post, 10/6/18). It’s absurd to expect journalists to wait for charges to be filed before credibly reporting a rape, or a resulting abortion.

Kessler’s email to Neiman Lab‘s Laura Hazard Owen (7/13/22) was perhaps even more revealing about his own biases. When asked about his “Fact Checker,” Kessler told her:

This story is an interesting example of how news can be widely shared these days. It was picked up by outlets around the world and it was based on one source— someone who was an activist in one side of the debate—without an apparent effort to confirm it. This factcheck added more context and was updated once there was a new development.

If only Kessler’s concern for single-source journalism and source “activism” extended to crime reporting, which often relies on a single (police) source, even when the crime being reported was committed by the police (see, e.g., CNN, 1/17/18)—which, unlike the case of the doctor, is a clear conflict of interest. FAIR could find no instance of Kessler expressing such a concern in any of his years of columns.

After updating his article to note that the story had been corroborated by Ohio police, Kessler wrote:

This is an interesting example of the limitations that journalists face in corroborating this type of story without evidence confirmed by law enforcement. Should Bernard have disclosed the case before the police charged a suspect? Should the Indy Star have published her account without a second source? Should other news organizations have repeated the story without doing their own reporting? Those are questions beyond the purview of the Fact Checker, but worthwhile for readers and media pundits to consider.

Despite claiming those questions to be beyond his purview, Kessler made his answers to them pretty clear in his original analysis. When readers expressed disbelief at Kessler’s inability to apologize for feeding the right-wing misdirection on the tragic story, he doubled down on Twitter (7/13/22), protesting: “Getting lots of angry emails but journalism is an accumulation of facts.”

Surely Kessler doesn’t believe that. If true, we’d hardly need journalists: just let the facts accumulate like snowdrifts on the pages of the Washington Post. But of course, journalism requires analysis (Kessler’s abortion piece is explicitly called an “analysis”!) and judgment about what stories are important and what stories are credible. That Kessler’s judgment in this case aligned him with the right-wing propaganda machine should tell both Kessler and his readers something about his own credibility.

The broader problem with Kessler’s “Fact Check” is that it lent an appearance of legitimacy to right-wing efforts to discredit the story, many of which picked up his “single-source” criticism as their basis for deeming it false. (See MediaMatters.org, 7/15/22.) 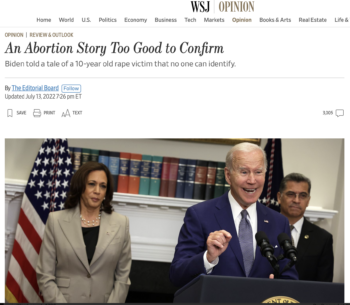 The Wall Street Journal editorial board (7/13/22) couldn’t fathom why no one would divulge identifying information about a 10-year-old rape victim.

Among those outlets, Rupert Murdoch’s propaganda empire unsurprisingly went all in, including the Wall Street Journal editorial board (7/13/22), which called the case  “An Abortion Story Too Good to Confirm.” The editors deemed it “an unlikely story from a biased source,” a “fanciful tale” that presumably was false because “so far no one has been able to identify the girl or where she lives.”

The next day (7/14/22), the paper was forced to admit that the story was, in fact, true, though it described its previous day’s aspersions merely a matter of the board having “wondered” about the case, and noted again that the Star story had been “based on a single source and provided no other confirmation,” and that “the White House also provided no backup details.” The editors concluded:

The country needs to find a rough consensus on abortion now that it has returned to the states and the political process. One way to help is to make sure that stories about abortion, from either side of the debate, can be readily confirmed. Passions are already heated enough.

In other words, not only did the board not apologize for its unsubstantiated aspersions, the only supposed lesson it could glean from this affair is that reporters should be more reluctant to report accounts of the horrors resulting from abortion bans.

Like every single one of its right-wing brethren, the Wall Street Journal refused to acknowledge the true lesson here: that of course the extreme consequences of the right’s draconian abortion laws are happening and will continue to happen across the country, since stopping all abortions is the whole point of the laws. It’s crucial that media tell these stories, rather than raising impossible bars to keep them in the shadows.

Please remember that respectful communication is the most effective. Feel free to leave a copy of your message in the comments thread here.