Post World War II Germany has exhibited commendable characteristics — publicly atoning for its Nazi past, working assiduously to create a thriving nation, designing a truly democratic country, integrating its European compatriots into a common market, leading others in opening borders to refugees, and modifying its previous ultra-nationalism to form the European union. Behind these praiseworthy attributes lurks another Germany and with a deadly appearance. Germany, which committed the World War II genocide, actively aids and abets another genocide ─ the genocide of the Palestinian people.

Conferences, reports, articles, and discussions have described the programs and assistance by which Germany has politically, financially, and militarily supported Israel and enabled the Zionists to violate international norms, illegally seize control of Palestinian lands, and suppress Palestinian aspirations for freedom and self-rule. Slipping under the radar is how Zionists exploit German benevolence and subvert German institutions in foreign lands to serve Israel. After a brief summary of how Germany contributed to Israel’s destruction of the Palestinian people, an example of the deliberate subversion will be discussed

Starting in 1952, West Germany agreed to pay three billion Deutschmarks (DM) to the newly formed Israel and an additional 4.5 million DM to Jewish organizations for assistance to Holocaust survivors worldwide. Estimates have the total reparations paid to Israel accruing to between $25 and $30 billion. The United States State Department estimates that, by 2018, payments from various programs to all survivors were $86.8 billion. The final amount may reach $100 billion.

The Federal Republic of Germany’s reparations enabled apartheid Israel to develop infrastructure—roads, railways, and shipping. Israel used the funds to buy patrol boats, tanks, weapons, and Germany’s Dolphin-class submarines, which can be fitted with nuclear warheads. German reparations have contributed to the destruction of the Palestinian people and to the possible destruction of Iran.

Enhancing Israel’s military efforts is only one facet of Germany’s allegiance to the apartheid state. The Bundestag, Germany’s federal parliament, voted to declare Israel’s existence to be part of Germany’s national interest and passed a non-binding resolution that designated the BDS movement as anti-Semitic.

A peculiar coda to Germany’s guilt trip appears in a recent news report from Times of Israel, by David Rising, 14 October 2020.

Germany has agreed to provide more than a half billion euros to aid Holocaust survivors struggling under the burdens of the coronavirus pandemic, the organization that negotiates compensation with the German government said Wednesday. The payments will be going to approximately 240,000 survivors around the world, primarily in Israel, North America, the former Soviet Union and Western Europe, over the next two years, according to the New York-based Conference on Jewish Material Claims Against Germany, also referred to as the Claims Conference.

This “claim” embarrasses countries and Jews around the world. The Claims Conference continues to nickel and dime present day Germans, who can use the money themselves or, at least help the more unfortunates, especially recent immigrants in Germany. How many displaced people have little access to vaccination?

I have known and still know many Holocaust survivors, including my own relatives, and none of them have required financial care. Decades ago, all survivors were already established citizens in their nations and supported by their adopted countries. Wouldn’t the funds be better used for the one million plus refugees that Germany has absorbed or the tens of millions of widows and children of those killed by Nazi bullets, Nazi bombs, and Nazi vengeance? Don’t they deserve protection? Why does Germany feel its present citizens, who have no responsibility for the Nazi atrocities, must be financially and morally culpable? Do the United States, Great Britain, France, Belgium, and Italy still shoulder responsibility for the atrocities they have committed and the victims they created? Maybe, former German chancellor, Konrad Adenauer, supplied the answer.

Le Monde diplomatique relates that Adenauer, in a 1966 television appearance, was asked about his reparations policy. The former Chancellor replied that “the German crimes against the Jews had to be expiated or repaired, if we were at all to regain our international standing”. He then added, “the power of the Jews even today, especially in America, should not be underestimated.”

Germany’s reparations position has set the tone for Remembrance curricula that have little basis to exist in foreign nations and especially in those nations that do not offer Remembrance curricula for the atrocities they have committed upon other peoples. The American Institute for Contemporary German Studies (AICGS) at Johns Hoping University in Washington DC is a prime example of how the Remembrance curricula in German institutions, in a quiet and not aggressive manner, influences the public in other countries.

AICGS defines itself as “a center for policy research and scholarship dedicated to the most important political, economic, and security issues confronting Germany and the United States in the global arena. AICGS anticipates challenges, proposes solutions, and bolsters the German-American partnership.”

In 2007, the Federal Republic of Germany established an independent charitable association called the Förderkreis des American Institute for Contemporary German Studies (AICGS). The charitable association allowed German residents to make tax deductible donations to support the mission of the AICGS and circulate one of its principle issues ─ Memory Politics.

AICGS explains its Memory Politics as:

Germany’s approach to acknowledging and providing redress for past crimes has offered other nations around the world a guide to reconciliation. While Germany’s efforts resulted from a unique situation and are not considered a blueprint for other nations to emulate, they have nevertheless informed and impacted other countries dealing with the difficult processes of memory, commemoration, and rebuilding bilateral relationships.

How does Memory Politics fit with AICGS thrust, which is “a center for policy research and scholarship dedicated to the most important political, economic, and security issues confronting Germany and the United States in the global arena.”

An AICGS discussion, Thursday, July 7, 2022, on “Documenta 15 and the Controversy over Anti-Semitism” displayed the dubious nature of this fit.

Even before the June opening of the fifteenth iteration of the prestigious Documenta contemporary art exhibition in the city of Kassel, several controversies, including alleged anti-Semitism on the part of the Indonesian organizers and some artists, had been swirling. Then, a banner was unveiled on the first day in which several Jewish figures were depicted in offensive, anti-Semitic ways. These took the form of a clearly labeled Mossad agent with the head of a pig (Mossad is Israel’s secret service), and a caricature of an Orthodox Jewish man wearing a black derby hat bearing the insignia of the SS, the Nazi unit responsible for the mass extermination of Jews. This has unleashed a torrent of critical commentary. AICGS has brought together three leading experts to help us to understand the controversies and the debates surrounding them in Germany.

In any discussion, the moderator is obliged to take a neutral position and serve to lead the discussion so that all sides are properly presented. At this discussion, if anybody represented Documenta 15 and its defense against accusations of anti-Semitism, I did not hear it. I did hear its moderator, Dr. Eric Langenbacher, behave as a Zionist representative.

Shown following are the banner drawings that received condemnation. 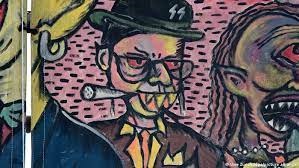 Critics charged the above drawing is an anti-Semitic presentation of an Orthodox Jewish person, with SS credentials on his hat. 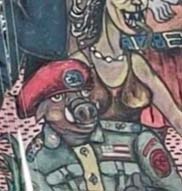 The drawing to the right seems to depict a uniformed person as a pig. Why this drawing is considered to be of a Mossad agent is not clear.

Interpret the drawings from a deliberately biased perspective, and one can quickly jump to charging offensive characterizations. Perceive them as emotionally charged expressions from those disturbed by Mossad actions and Orthodox Jewish settlers who daily harass and even kill innocent Palestinians, and the drawings become protest street art, which is supported by hundreds of millions non-racist people throughout the world. 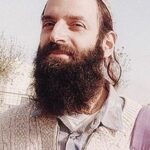 The photo on left is Baruch Goldstein, an Orthodox Jewish settler who murdered 29 and wounded 125 Palestinian Muslim worshipers at the 1994 Cave of the Patriarchs massacre in Hebron.

The photo below depicts Orthodox Jewish settlers who are harassing Palestinian farmers. 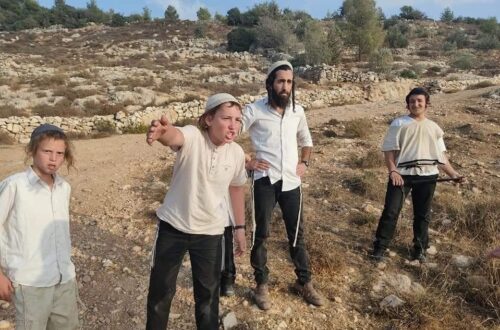 A foreign observer from Indonesia who wanted to draw murderous settlers in a gruesome manner would naturally draw what he/she knew from newspaper reports and images accompanying them, including images of Orthodox Jews praying at the Western Wall. Seems perfectly rational and without derogatory motives. Maybe this report from Basil Adra, a +972 reporter, agitated the artist.

Last September, I ran up a mountain, panting, while being chased by dozens of masked Israeli settlers near my home in the South Hebron Hills. I was filming them descending with clubs upon a small village, Mufagara, located in Masafer Yatta in the occupied West Bank, where over 1,000 Palestinians are facing imminent expulsion from their homes.

The settlers smashed the windows of homes, vandalized cars, and beat up families, stoning them with rocks and wounding several residents. They fractured the skull of a three-year-old child, one of my neighbors, as his mother tried to hide him and the other children in a small room.

The one-sided discussion revealed its total bias when the moderator, Dr. Langenbacher, asked the commentators to express opinions on the “dark side” of anti-Semitism, audaciously citing a comparison of Islamists with Nazis, and characterizing Hezbollah and Hamas as anti-Semitic.

The dictionary defines an Islamist as “someone who believes strongly in Islamic ideas and laws.” Dr. Langebacher, savior of the Jews from anti-Semitism, blithely commits a bigoted statement that compares Islamists with Nazis.

What do Hezbollah and Hamas have to do with the questions posed by the Documenta 15 exhibition? By what right does Dr. Langenbacher, living in the United States, impugn the motives of those who fight against Israel’s theft of Palestinian lands and destruction of the Palestinian people?

Documenta 15 committed no offense against any peace loving ethnicity. It only portrayed the racist and murderous elements of Israeli society in a metaphoric manner. German authorities were incorrect in removing a banner, which should preferably circulate throughout the world.

The Federal Republic of Germany and the United States share responsibility for empowering Israel in its destruction of the Palestinian people, soothing their guilt by donating money and supplies to the Palestinians and their unwanted government, and enabling the Palestinians to survive another day before the next onslaught. A preferred argument against Documenta 15 is that it erred by not including drawings of these two “angels of death” in its popular and informative exhibition.

The post Zionism and the Dark Side of Germany first appeared on Dissident Voice.

This content originally appeared on Dissident Voice and was authored by Dan Lieberman.