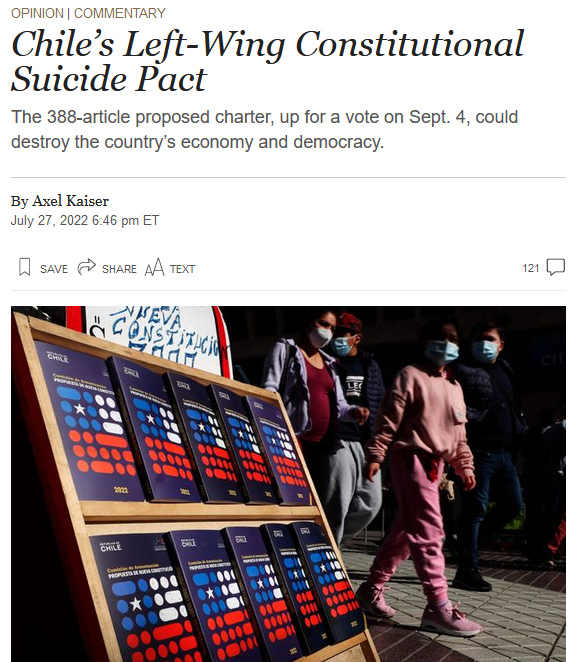 Chileans will vote in September on whether to approve a new constitution that promises to address inequality and lack of democracy (Reuters, 7/4/22). It would replace the present constitution imposed by the dictatorship of Gen. Augusto Pinochet, who came into power through a US-backed coup in 1973. The nation’s newly elected left-wing leadership is calling for a “yes” vote, although in the much-divided country, the constitution faces steep opposition from the right.

US and Western editorialists are also pushing for a no vote. Opposition to the constitution’s economic changes should be expected; of course conservative and corporate centrist outlets will be against a proposed constitution that would make way for economic regulation and nationalization. But the idea being pushed that a democratic process to upgrade the national framework from one designed under despotism is against “democracy” is both Orwellian and an effective propaganda tool against popular progress.

A Wall Street Journal op-ed (7/27/22), penned by Axel Kaiser of the right-wing Atlas Center, complained that the proposed constitution “could destroy Chile’s economy, democracy and integrity as a nation.” Exhibit A was “a new entity, the Council of Justice, to evaluate judges’ performance and decide whether they can remain on the bench”—thereby paving the way for a “dictatorial regime.” Given that unaccountable judges in the United States are stripping citizens of basic human rights, some US readers might be more sympathetic to the introduction of a check on judicial power.

The op-ed also warned that “Chile’s proposed constitution would eliminate the Senate—a more than 200-year-old institution that has historically played a crucial role in balancing political power.” In “the new system, a single chamber would reign,” Kaiser wrote, suggesting that this “does not comply with the minimum standards required by Chile’s democracy.” But as unicameral legislatures are common in many democracies–including 16 members of NATO–this fear seems overblown. 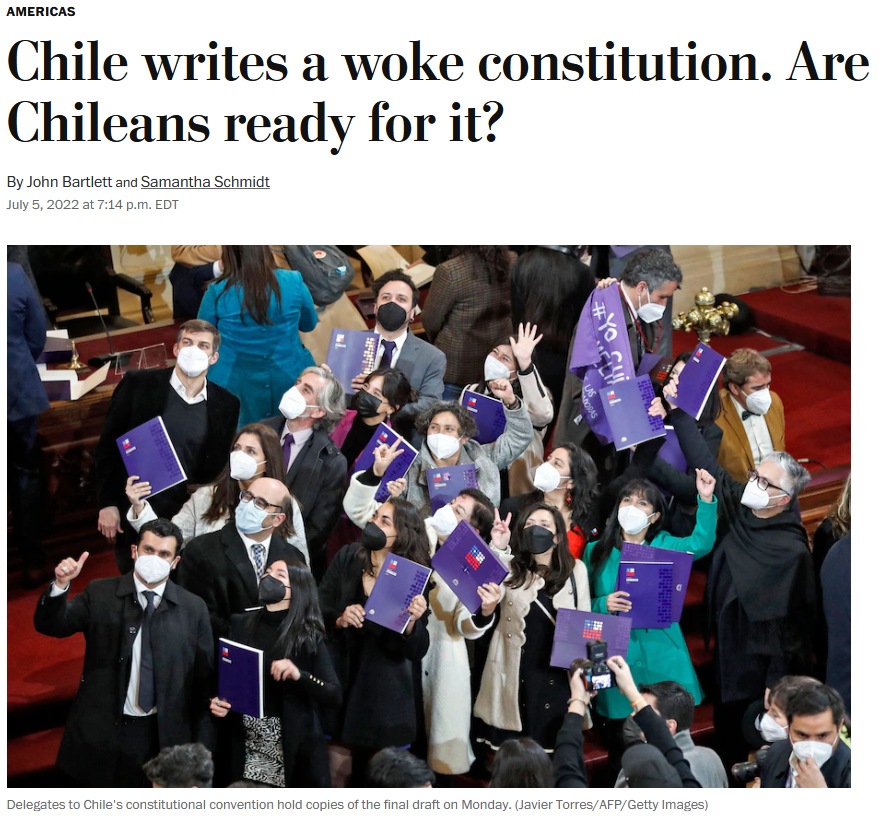 Washington Post (7/5/22): The draft is “a woke constitution propelled by left-leaning millennials.”

In an otherwise fair piece, the Washington Post (7/5/22) described the draft constitution as “woke” in the headline, and remarked, “It’s a woke constitution propelled by left-leaning millennials and built for a modern nation led by one.” This is the continuation of a trend FAIR (11/17/21) has documented of corporate media using the word “woke,” an expression from African-American vernacular that signifies awareness of systemic oppression and inequality, as a buzzword to deride a wide range of left-leaning political positions, dismissing them as millennial over-sensitivity.

The Economist (7/6/22), in calling for the constitution’s rejection, focused much of its ire on constitutional protections for the non-rich, like the establishment of a national health system and declarations of rights to food, housing and trade unions–derided as “a fiscally irresponsible left-wing wish list.” The magazine did laud the draft’s devolution of powers to regions and to indigenous people—good on the Oxbridge fellows there—but complained that “the draft upends the budget process by giving Congress new powers to propose spending bills, although the president can veto them.” This is basically how the US budget process works; in theory the process starts with the president submitting a proposal to Congress, but as the Washington Post (2/13/22) noted, “It’s an American political tradition for Congress to consider every president’s budget as ‘dead on arrival’” (a tradition that has not changed under Biden).

Although it was demographically representative, its ideological slant was not. Only 43% of voters bothered to choose the convention’s members in May 2021. Around 55 delegates were hard leftists, many of whom ran on single-issue tickets. Scandals did not help. A deputy resigned for lying about having cancer. They bickered among themselves. Indigenous constituents complained about racism. Right-wing representatives accused other assembly members of wanting to create an “indigenous monarchy.”

This does sound messy and headache inducing. But to a Northeast US beat reporter, none of the shenanigans alleged here would seem out of place in, say, New Jersey state politics. This is what democracy looks like.

The National Review (7/24/22) warned “the referendum on September 4 is the last chance for citizens to stop Chile from becoming a socialist country as Venezuela did.” Again, it’s not out of character for conservative editorialists to be against a leftward drift in Latin America. What they seem to gloss over is that this is all the result of a democratic process. The people of Chile or Venezuela have the right to decide their fate. 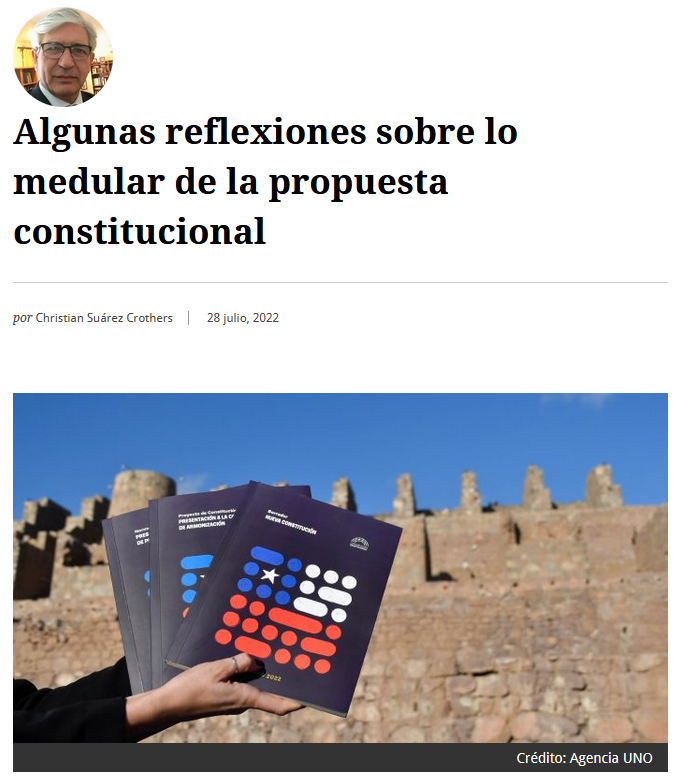 It is true that while Chile’s current president won with a decisive victory, the constitution is a hard sell to a sharply divided Chilean electorate. But, again, that is democracy, and governments and constitutional assemblies are obliged to make the best case they can for the document they’re asking people to approve. Chile’s El Siglo (7/25/22) reported that in one weekend, “thousands of citizens were deployed in almost all regions of the country in plazas, house to house, parks, avenues, public places, delivering information on the text of the new Constitution, and calling” for a yes vote.

The text is open to its reform and even its total replacement in a more flexible way than the current Constitution. Important limits and controls are established to the State, through the broad protection of rights and control of the administration through the creation of administrative courts; all this for the benefit of the citizens who will not be at the mercy of the arbitrariness of the administration. A regime much superior to the existing one. The right to property is guaranteed to standards superior to those of Italy or Germany, and the constituents did not expressly incorporate nationalization, while, for example, France is advancing towards the nationalization of the entire electricity sector.

Suárez added that in terms of economics, the political elite feared “the establishment of a regime that promotes transparency and fiscal responsibility at all levels, and the end of lobbying in the highest appointments.” He scoffed:

How difficult it will be to obtain aid outside the system of competitions for positions in the administration of justice, for example, with the existence of a transparent Superior Council of Justice and subject to rules of public competition and probity!

The media drumbeat about the crumbling of democracy in the world isn’t unfounded. From Hungary (Atlantic, 4/2/20) to Brazil (Foreign Affairs, 11/1/21) to the United States (NPR, 1/3/22), democratic institutions are crumbling, under attack from the right and the corporate class while feebly defended by the center-liberal parties.

Whether this constitution gets approved or not, Chile is going in the opposite direction. The press should highlight that instead.

The post Chile’s Draft Constitution: Undemocratic—or Too Much Democracy? appeared first on FAIR.