President Joe Biden on September 1 delivered a roughly 25-minute primetime speech from Independence Hall in Philadelphia about Trumpism’s threat to US democracy. Primetime, that is, for the two major US television networks that aired it live: MSNBC and CNN. The others—ABC, CBS, NBC and Fox—opted not to carry the address, because they deemed it “political” (Washington Post, 9/2/22). 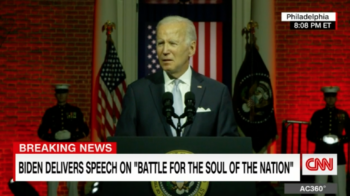 CNN is one of two major US TV networks that aired President Joe Biden’s speech live from Philadelphia.

Across the Atlantic just over a week later, King Charles III addressed Britain and the world about his 96-year-old mother’s death and his preparations to take over the solely symbolic role of British monarch. ABC, CBS, NBC and Fox all presumably found it more newsworthy than the President’s remarks, because they carried it live (MediaMatters, 9/9/22). (CNN and MSNBC carried both Biden’s and Charles’ speeches.)

Biden’s speech urgently named MAGA Republican ideology as an imminent threat to democracy, rejected violence and extremism, and condemned conspiracy theories. The “political” speech took an explicitly bipartisan tone, with Biden repeatedly claiming that Trumpism doesn’t represent the majority of the Republican party, and appealing to the American public regardless of political affiliation to defend democracy.

“I’m an American president—not the president of Red America or Blue America, but of all America,” he said.

Charles’ speech, on the other hand, was essentially a eulogy. He waxed poetic about Queen Elizabeth II’s public and private lives, praising her “warmth” and “humor” and the “sacrifices” she made to uphold her “duty.” It was appropriately vague and inoffensive for a figurehead whose job is to be apolitical.

Despite the President of the United States’ speech being patently more relevant to the American people than the symbolic figurehead of another country’s address, the latter had not only more networks airing it, but nearly as much analysis and coverage in the 48 hours surrounding it as the former: A Nexis database search of ABC, CNN, NBC, MSNBC, CBS and Fox transcripts the day of and the day after each of the respective speeches turned up 113 mentions of Charles’ speech and 116 of Biden’s. 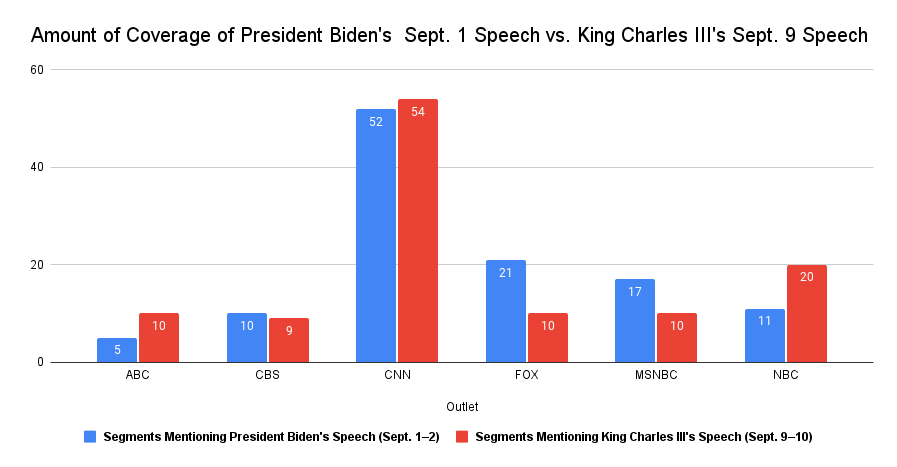 However much time they gave it, each of these networks characterized the president’s speech as inflammatory, ignoring much of its content, and “balancing” it with a chorus of Trump-aligned politicians. 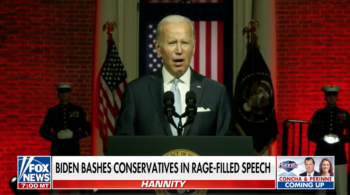 Fox characterized Biden’s speech as a “dark and depressing” “diatribe.”

Unsurprisingly, on Fox News’s Hannity (9/2/22), fill-in host Tammy Bruce whined that Biden “bashe[d]” Republicans in his “rage-filled speech” that she later described as a “dark and depressing” “diatribe.” But this same right-wing indignation could be heard across network news, regardless of their presumed political leanings.

ABC’s World News Tonight anchor Mary Bruce (9/2/22) called the remarks “scathing,” saying the speech “slam[med]” MAGA Republicans. The segment quoted Republican former South Carolina Gov. Nikki Haley, who served as UN ambassador for Trump: “It was one of the most unbelievable things I’ve seen in a long time. It’s unthinkable he would be so condescending and criticize half of America.”

Reporter Craig Melvin on NBC’s Today show (9/2/22) described the speech as “politically charged,” and anchor Peter Alexander called it “blistering,” including derisions from Republican California Rep. Kevin McCarthy, without including any voices of those who found Biden’s condemnation of Trumpism necessary. The segment also described the speech being delivered in front of a “military backdrop”—that is, two Marines standing behind Biden. (Marines have been present at other debatably “political” presidential speeches, including Trump’s at the RNC in 2020.)

CBS Morning News’ Bradley Blackburn (9/2/22) chose the word “sharp.” And though CNN opted to air the remarks in primetime, they included the opinion of former Trump White House official Gavin Smith, who posited that threats to democracy are not a priority to discuss in a 25-minute speech, and that Biden should have spoken instead about rising prices (CNN New Day, 9/2/22). (To her credit, anchor Brianna Keilar pushed back against this statement.)

MSNBC’s The Beat (9/2/22) took Biden’s speech more seriously, with anchor Katie Phang calling out the irony of the GOP labeling a speech about the GOP’s divisiveness as divisive. “There’s so many Trump supporters,” she said:

They’re screaming about how Joe Biden now has promoted this divisiveness. But you know, the reality is, they’re not looking in the mirrors, right? There’s this hypocrisy that seems to be the currency that these Republicans are trading in.

Believers in the ‘storm’

Instead of engaging in handwringing over Biden’s tone, these outlets could have investigated the truth of his claims that MAGA ideology—regardless of what percentage of the Republican party subscribes to it—is a threat to democracy. Beyond the deadly January 6 insurrection itself, polling backs up Biden’s assertions that there are  widespread anti-democratic tendencies within the Republican Party.

Additionally, the Washington Post (9/18/22) recently questioned 19 GOP candidates running in gubernatorial and Senate races about whether they’d accept the results of the upcoming elections. Twelve either refused to commit or declined to respond. All 19 Democratic nominees committed to accepting the results of the elections.

Sowing distrust in legitimate democratic processes—and resorting to violence in an attempt to prevent them—is certainly dangerous to democracy.

Of course, Charles’ address the day after the queen’s death served a much different purpose than Biden’s: celebrating and remembering a figurehead, versus warning against a rising domestic threat to American democracy. While comparing the content of these two addresses would be comparing apples and oranges, networks’ attitudes toward each are telling. 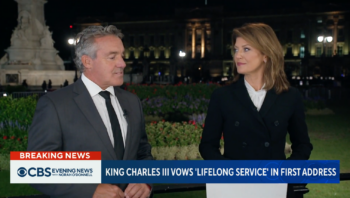 While the death of the 96-year-old queen and ascension of her son might be significant for royalists—and the pomp, circumstance, anachronism and celebrity of the monarchy might be entertaining and appealing to many Americans—it has almost no political implications for the world. That’s because the British monarch’s role is ceremonial, and, as the constitution dictates, apolitical.

But the British monarch is also inextricably linked to the British Empire and is a living symbol of that imperial legacy, as well as of an extreme elitism based on nothing more than the privilege of birth (Economist, 9/15/22). Elizabeth’s death spurred significant conversations about Britain’s brutal, bloody legacy of colonialism around the world and abolishing the monarchy—all of which was left out of the above segments, and the majority of network news coverage.

US news networks instead largely discussed the queen’s death as if everyone agreed on her legacy. “The world mourns the death of Queen Elizabeth,” said CBS Mornings’ Anne-Marie Green (9/9/22), who described the late monarch as “one of the most beloved women in the world.”

‘We need to examine that history’

The entire world was not, in fact, mourning the death of Britain’s queen. On Democracy Now! (9/13/22), Amy Goodman discussed the possibility that “British Overseas Territory” (read: colony) Antigua and Barbuda might cut ties with the British monarch. When asked to respond to the queen’s death, Dorbrene O’Marde, chair of the Antigua and Barbuda Reparations Commission, said:

I’m under no obligation, I think, to be mourning her death. And that is simply because of, I think, my understanding of history, my understanding of the relationships of the British monarchy to African people and Asian people, but to African people certainly, on the continent and here in the Caribbean. And so that my response is perhaps to recognize the role that the queen, Queen Elizabeth II, has played, how she has managed to cloak the historical brutality of empire in this veneer of grandeur and pomp and pageantry, I guess, and graciousness. But I think that at this point in time, we need to examine that history a lot more closely.

Even though Elizabeth II had no legislative abilities, this colonial violence was enacted to uphold the empire she helmed (Vox, 9/13/22).

‘They know nothing about colonialism’

Fox specifically scolded those criticizing the monarchy, claiming colonized countries should be grateful for the image of stability Elizabeth upheld, arguing she led the decolonization process. Contributor Douglas Murry claimed on Hannity (9/9/22):

There are a handful of scholarly and international legal definitions of genocide. “Everyone has to be dead” is not one of them.

Other programs may not have engaged in this kind of royalist admonishment, but they still delighted in the royal corgis (ABC’s Nightline, 9/9/22), swooned over Charles’ “emotion” (CNN Newsroom, 9/9/22), admired his handshaking with the crowd (Fox Special Report, 9/9/22) and saluted his promise of a “life of service” (NBC Nightly News, 9/9/22), with little space given to substantive critique of what the monarchy represents. 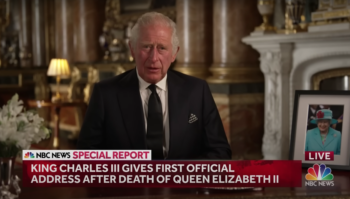 As noted, none of the aforementioned TV segments that effusively memorialized the queen and relished in the pomp and circumstance of the monarchy addressed colonialism. In fact, of the total 113 segments on network TV that mentioned Charles’ speech, only 29 mentioned—even in passing—Britain’s colonial legacy or calls to abolish the monarchy. Fifteen of those were from CNN, five from MSNBC, four from NBC, three from Fox (all of which condemned criticism of the monarchy), one from ABC and one from CBS.

CBS’s mention denied that there was any movement for change: “There is no current, no modern, serious movement to abolish the monarchy,” journalist and royal-watcher Tina Brown said on CBS Mornings (9/9/22).

That depends on what you define as “serious.” In Australia, thousands marched for abolishment, shutting down streets in Melbourne on the country’s National Day of Mourning for the queen (Australian Broadcasting Corporation, 9/22/22). #AbolishTheMonarchy trended on social media (Forbes, 9/9/22). Pro-republican campaigns in Australia, New Zealand and Canada are expected to gain traction now (Wall Street Journal, 9/11/22).

Many shows repeated the term “colonial past” (e.g., NBC’s Today, 9/9/22; CNN Newsroom, 9/9/22), as if British colonialism is not ongoing. Today, British companies still own $1 trillion of Africa’s gold, diamonds, gas and oil, and an area of land in the continent about four times the size of Britain itself (Guardian, 4/17/18).

Other legacies of colonialism still reverberate: In 2013, Carribbean heads of governments established the Caricom Reparations Commission (CRC) to demand reparations for Britain’s genocide, slave trade and apartheid in the region, citing illiteracy, physical and mental health issues and generational poverty as modern-day effects of British rule and slave trade.

Suffice it to say, worldwide opinion about the British monarchy, the death of Queen Elizabeth and the rise of King Charles is far from unanimous, despite US television news framing Charles’ speech—unlike Biden sounding the alarm over the threat to democracy—as something we all could agree on.

The post King Mourns Mother? Breaking News. Democracy Under Threat? Not So Much. appeared first on FAIR.