After turning in the draft of an op-ed monologue critical of Israel, journalist Katie Halper was fired from her new post at the Hill TV’s political commentary show Rising (Daily Beast, 10/4/22).  The monologue, known as a “Radar” on Rising, was called “Israel IS an Apartheid State.” 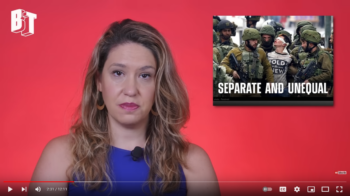 In documenting Israel’s status as an apartheid state, Kate Halper crossed one of corporate media’s most policed red lines.

Halper (who has written for FAIR) used CNN’s Jake Tapper (9/21/22) and Anti-Defamation League CEO Jonathan Greenblatt’s condemnation of applying the term “apartheid” to Israel, and their suggestion that Palestinian-American Rep. Rashida Tlaib was antisemitic for saying support for Israel was incompatible with progressivism, as a jumping point to examine Israel’s ethnonationalist violence.

In her commentary, Halper laid out the case that has been made by major human rights organizations like Amnesty International (2/1/22) and Human Rights Watch (4/27/21), and the Israeli human rights group B’tselem (1/12/22), that Israel is in fact an apartheid state. Along with substantial documentation, Halper contributed a personal perspective as well:

I was born in New York City. My great-grandparents…were from Eastern Europe. I could move to Israel today, buy a house, get a job, travel around with no problem. So could Jake Tapper and Jonathan Greenblatt. But a Palestinian like Rashida Tlaib can’t even visit her family home in what is now Israel.

The monologue was going to be Halper’s first as a permanent co-host, after having been a contributor for three years. Rising frames itself as a forum where “anti-establishment” or “populist” views from both the left and the right can be freely exchanged and debated. Former co-host Ryan Grim, who personally delivered more than 150 monologues for Rising, noted there is “no approval process” for hosts’ commentaries (Intercept, 9/29/22). Despite this, executives at Hill TV and/or its new parent company Nexstar Media saw Halper’s criticism of Israel as a bridge too far.

First Halper’s superiors put the commentary under review. Then they told her that it would be nixed altogether, because of a brand-new policy barring opinion pieces on Israel, which even the producer was unaware of. Finally, they fired her (Daily Beast, 10/4/22).

Halper wasn’t the first journalist silenced for criticizing Israel, and she won’t be the last. In her response to the firing and in subsequent tweets, Halper pointed to several other recent examples:

Photojournalist Hosam Salem (Twitter, 10/5/22) disclosed being banned by the New York Times for his pro-Palestinian views.

Just this week, New York Times freelance photojournalist Hosam Salem reported that the Times fired him after the “Israel lobby organization Honest Reporting, which exists to attack the Palestinian narrative in the West” (Mondoweiss, 10/5/22), accused him of antisemitism for voicing support for Palestinian resistance to Israeli occupation forces. Salem discussed his firing on Twitter:

What is taking place is a systematic effort to distort the image of Palestinian journalists as being incapable of trustworthiness and integrity, simply because we cover the human rights violations that the Palestinian people undergo on a daily basis at hands of the Israeli army.

‘The best defense is a good offense’

The firing of journalists like Salem, Wilder and Hill wasn’t in response to their violating any clear policy of their respective outlets. Instead, well-funded pressure groups are able to get pro-Palestinian journalists fired, especially when they can appeal to pro-Israel sympathies in media management.

In Halper’s case, her firing may be connected to Nexstar Media‘s August 2021 purchase of The Hill, including its TV outlet. Jacobin’s Branko Marcetic (10/1/22) wrote of “signs of a possible tilt in The Hill’s editorial line on Israel”:

In late August, Nexstar filled the position of deputy managing editor of NewsNation, its cable channel, with Jake Novak, a journalist who spent the preceding year and a half as the media director of the Israeli consulate general in New York….

Six days before the announcement of his hiring, Novak led a presentation at Bar-Ilan University titled, “Defending Israel Against Media Bias—How to Fight News Media and Social Media Bias Against Israel: The Best Defense Is a Good Offense.” It was an update of a talk he had given in 2016 about defending Israel’s reputation, which the host described as “an absolute master class in public relations and diplomacy.”

As Marcetic noted, a pro-Israel bias in Nexstar should be of grave concern: Following its purchase of Tribune Media, it is now the largest local broadcast TV owner in the US. 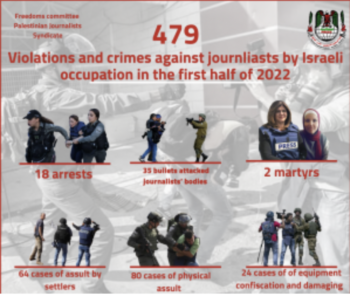 For journalists operating in Palestine, censorship takes on violent and deadly forms.

Getting fired is hardly the worst form of retribution experienced by journalists who expose Israeli crimes. The Palestinian Journalists Syndicate reports 479 violations and crimes against Palestinian journalists by Israeli forces and settlers in just the first half of 2022. These include two killings, 35 shootings, and numerous assaults and arrests. On Wednesday, two Palestinian journalists were shot by Israeli occupying forces while covering an Israeli raid in the West Bank (Al Jazeera, 10/5/22). Over 50 journalists have been killed by Israeli forces since 2001, including Al Jazeera reporter Shireen Abu Akleh, who was an American citizen (Vox, 5/13/22; FAIR.org, 5/20/22, 7/2/22).

Washington’s supply of weapons and aid to Israel is critical to Israel’s capacity to uphold apartheid (Al Jazeera, 6/4/21; Belfer Center, 2/7/17), so maintaining a positive opinion of Israel in the US public is of extreme importance to Israel. By censoring critical journalists like Katie Halper, US corporate media are thus playing a key role in supporting a system that has seen journalists killed, assaulted and detained in Israel/Palestine.

ACTION ALERT: You can send a message to the The Hill at https://thehill.com/contact/ or on Twitter: @HillTVLive. Please remember that respectful communication is the most effective. Feel free to leave a copy of your communication in the comments thread.

This content originally appeared on FAIR and was authored by Luca GoldMansour.