Military intervention into Haiti is in the air again.

And the East Coast establishment media—which have on occasion remembered that Haiti is a near neighbor and has been ravaged by anti-government demonstrations, a failing economy and gang violence—seem to be breathing a sigh of relief.

The Washington Post (10/11/22) ran an editorial: “Yes, Intervene in Haiti—and Push for Democracy.” That followed on the heels of a piece in the other big opinion-maker, the New York Times (10/7/22), whose tall title read: “Haiti Appeals for Armed Intervention and Aid to Quell Chaos.”

The New York Times (10/7/22) reports on Haiti’s appeal for foreign armed intervention. Thousands of Haitians have protested and spoken out against foreign intervention, which begs the question, who is “Haiti,” according to the paper?

Without going into the article, it’s fair to ask: Who or what is “Haiti”?

Is “Haiti” the current occupant of the prime minister’s chair?

The myriad and sometimes violent demonstrations against the illegitimate and unelected man suggest that, no, Ariel Henry is not “Haiti.” The New York University law clinic attorney and human rights advocate Pierre Esperance (Just Security, 7/22/21) called the Biden administration’s support for Henry, who stepped into power after President Jovenel Moise was assassinated, another “bad choice.” Instead, Esperance said, the US should back “a transitional government.” But that was over a year ago. And that did not happen.

Another reason Henry’s request for intervention does not represent “Haiti” is the fact that the idea seems to actually have been gestated afar. Organization of American States chief Luis Amargo put it pretty bluntly in a tweet on October 6: “I called on Haiti to request urgent support from international community to help solve security crisis and determine characteristics of the international security force.” 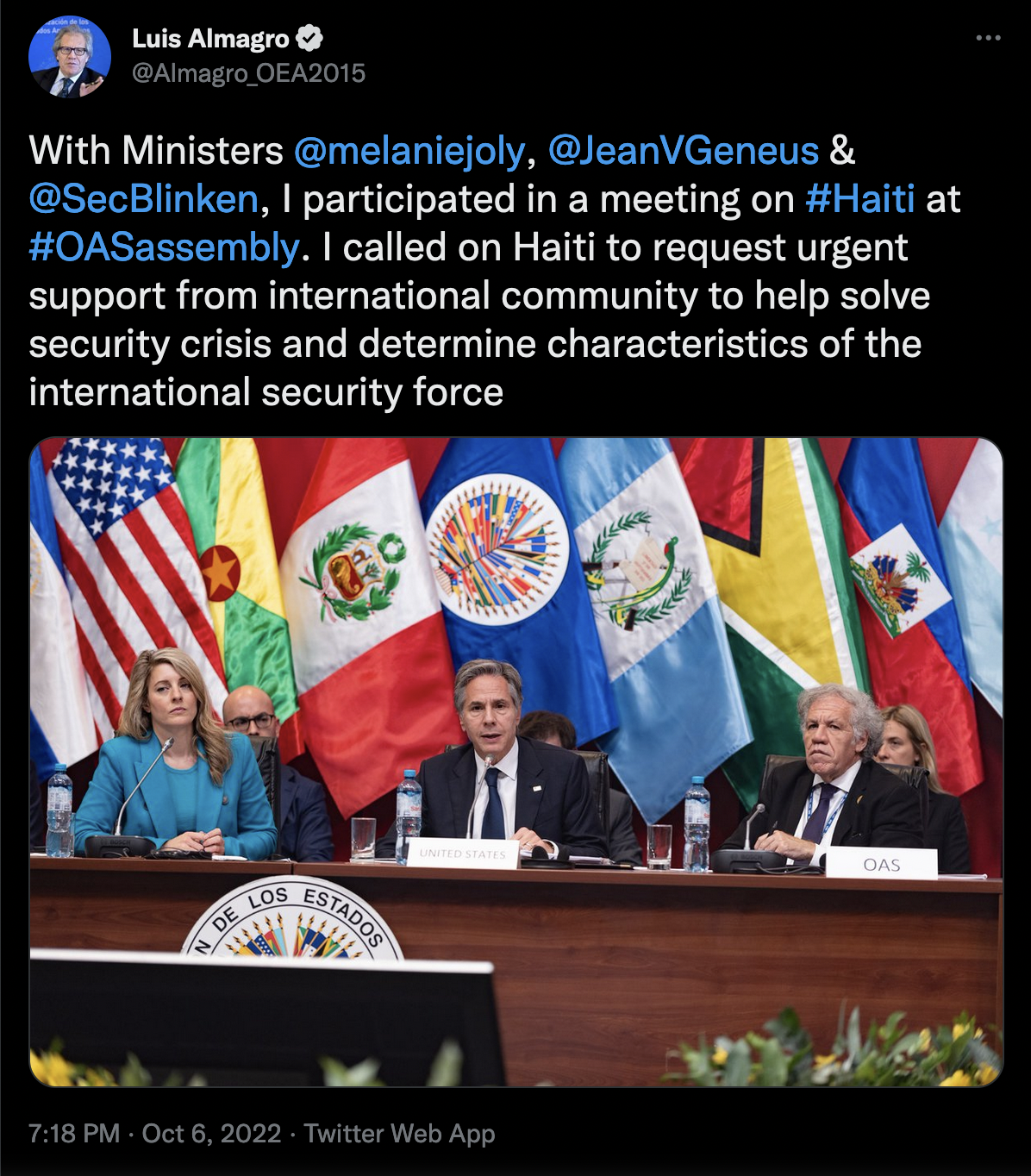 Henry issued “his” request on October 7.

Maybe that “suggestion” was already in the air?

Just a day before the Amargo admonition, a number of US lawmakers also asked the Biden administration to end its support for Henry and to support a transitional plan which takes into account “the voice of the Haitian people, including through groups such as the Montana Accord.”

Does “the Montana Accord” represent Haiti?

Arguably, at least partially. The Accord is the nickname for a broad coalition of many scores of political parties, unions, women’s and peasant organizations, chambers of commerce and Protestant and Catholic church organizations. The very day Henry asked for a “specialized military force,” the organization issued a statement opposing any foreign intervention, and calling Henry a “traitor.”

“History teaches us that no foreign force has ever solved the problems of any people on earth,” the press release reads.

Just a month ago, a member of the anti-corruption group Nou Pap Dòmi—also a member of the Accord—was in Washington. Testifying at the House Foreign Affairs Committee (9/29/22), Velina E. Charlier rejected foreign intervention.

The US, she said,

has always followed a paternalistic and interventionist approach that often fails to serve the best interests of the Haitian people. Through its embassy in Port-au-Prince, the United States has continued to support leaders who have emerged from fraudulent elections or corrupt governments that have lost all popular legitimacy.

She noted that international intervention of all sorts “has greatly contributed to bringing Haiti to the brink of collapse.”

But since not all Haitians and Haitian organizations are represented in the Accord, maybe “Haiti” is the Haitian people who take to the streets to demonstrate? And those brave enough to risk possible repression to speak to local and foreign reporters? And those who just continue trying to live their lives in deteriorating economic, political and social conditions?

Since long before the current unelected and illegitimate government of Prime Minister Ariel Henry took power, people have been demonstrating against the government and against US support for both Henry and Moise. More recently, those marches and burning barricades have become more focused on denouncing any kind of foreign intervention. Yet the Washington Post editorial board (10/18/22) did not consider the desires of Haitians themselves, arguing that a military intervention is “justified on humanitarian grounds and dovetails with the United States’ own interests.”

On October 17, the 216th anniversary of the murder of founding father General Jean Jacques Dessalines, many thousands demonstrated against intervention in cities and towns across the country. The crowds also demanded Henry step down and denounced high gasoline prices and the continued rising gang violence.

Reyneld Sanon of Haiti-based Radio Resistance and the Haitian Popular Press Agency explained the ire in a statement quoted in the Real News Network (10/17/22). He rejected the ruling party’s decision “to request international imperialist forces to occupy the country for a third time.” He said that the decision insults “our ancestors, who fought to break the chains of slavery” and asserted that “in the case that the foreign military occupation force arrived in Haiti, all Haitians, progressive groups, popular organizations, and left-wing political parties, will stand to fight.” 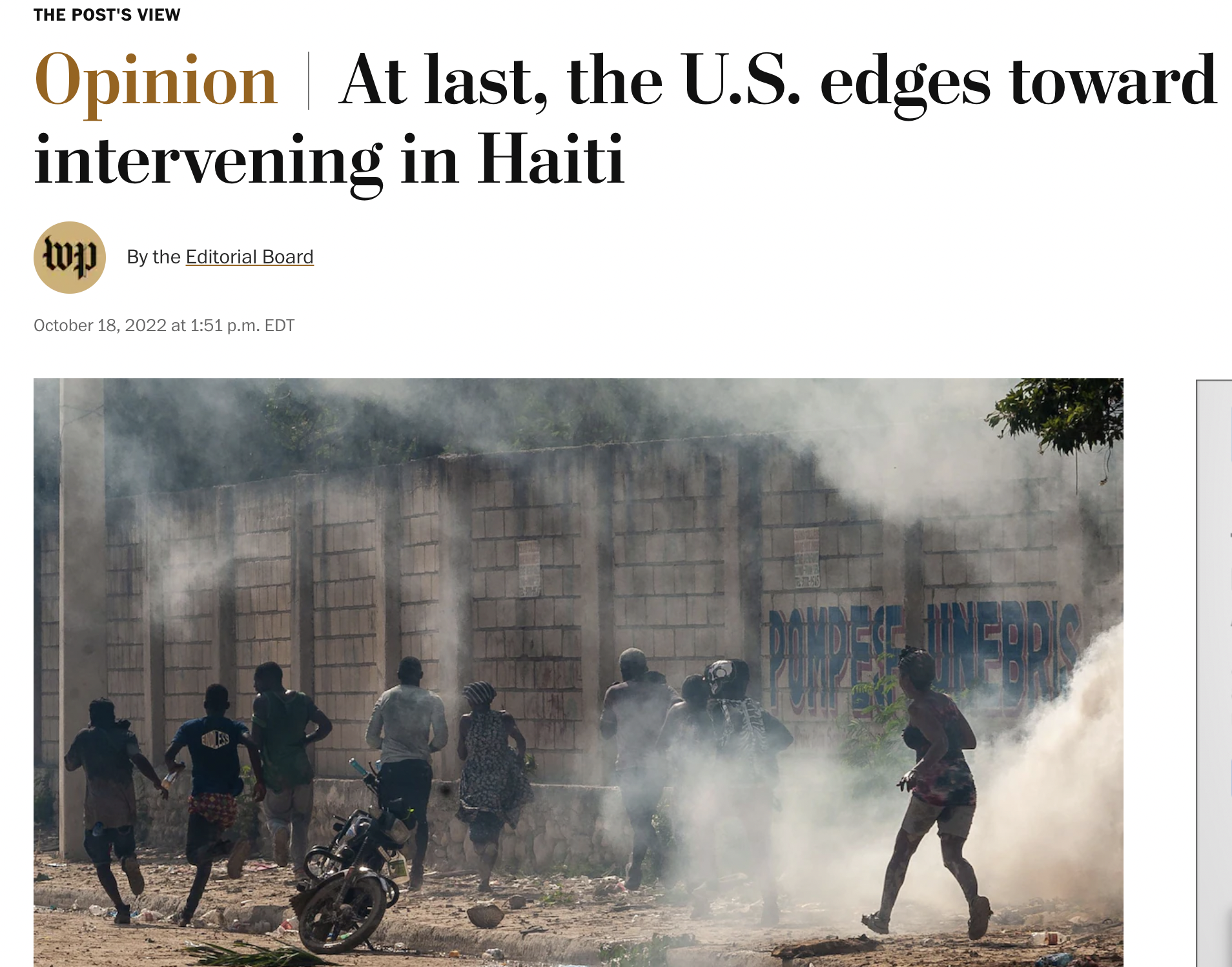 The Washington Post editorial board (10/18/22) salivated at the prospect of an intervention that “dovetails with the United States’ own interests.”

In the New York Times article (10/7/22) mentioned above, journalists Natalie Kitroeff and Maria Abi-Habi flatly noted, “United Nations peacekeepers who were in the country between 2004 and 2017 committed sexual abuse and introduced cholera to the country, starting an outbreak that killed nearly 10,000 people, according to the World Health Organization.” This immediately followed their suggestion that “it is not clear how an international security force would be received by Haitians, who might see it as meddling in their affairs.”

The Post editorial board (10/11/22) went so far as to announce, without supporting evidence, that, “weighed against the cratering prospects of a failed state whose main export is asylum seekers, many Haitians would support—if with misgivings—the chance at restoring some semblance of normal life.” (The board has repeatedly signaled that the rights and interests of Haitians are of less importance than order at the US border—see FAIR.org, 10/14/22.) Revisiting the issue a week later (10/18/22), the board argued that a military intervention is “justified on humanitarian grounds and dovetails with the United States’ own interests,” neglecting to even mention Haitians’ perspectives.

In fact, it seems pretty clear to anyone who follows Haitian news sources like Radio Rezistans and Alterpresse, checks out what foreign academics and think tanks say or even peruses mainstream outlets like PBS and NPR, that foreign military intervention of any sort is both unwanted and likely to have only negative impacts. Some recent articles have headlines like “Intervening in Haiti, Again“ (Foreign Policy, 10/21/22) and “The Last Thing Haiti Needs Is Another Foreign Intervention” (Tricontinental.org, 10/20/22) and “De Facto Haitian Authorities Call for (Another) Foreign Military Intervention” (CEPR.net, 10/14/22). None are advising boots on the ground.

To top it all off, even Biden’s former envoy to Haiti, who resigned over what he called “inhumane, counterproductive” policy of deportations, has “slammed” the plan for an intervention, predicting it could lead to an armed uprising.

“It’s almost unfathomable that all Haitians are calling for a different solution, yet the US and the UN and international [institutions] are blindly stumbling through with Ariel Henry,” he said in an interview in the Intercept (10/19/22).

So, New York Times and Washington Post readers and watchers, has “Haiti” appealed for intervention?

The post Who Is This “Haiti” That’s Appealing for Intervention? appeared first on FAIR.

This content originally appeared on FAIR and was authored by Jane Regan.