NATO leaders’ meeting at The Grove hotel and resort in Watford, north of London, on December 4, 2019 (Al Drago for The New York Times)

The North Atlantic Treaty Organization (NATO) held an abbreviated two-day meeting this week in London on its 70th anniversary. On display was a zombie alliance that is bitterly divided on multiple issues and has lost its purpose for existing. Rather than recognizing it is time to end this obsolete military alliance, they decided to expand their activities, search for a purpose and conduct a study to determine their strategy.

NATO is a cold war relic, an anti-Soviet tool continuing to exist 40 years after the Soviet Union ended. NATO was created one month after the bombing of Hiroshima and Nagasaki, in September 1945, with 12 members. This was ten years before the formation of the Warsaw Pact, which was founded on May 14, 1955.  NATO was not formed to combat the Soviet Union’s Warsaw Pact, although that was the previous excuse used for its existence.

When President Trump campaigned for office he correctly declared NATO was obsolete, but then he reversed course in April 2017. As president, he has pressured the 29 member-countries to increase their military spending. Between 2016 and 2020, NATO’s budget increased by $130 billion – twice as much as Russia’s total annual military spending. NATO members are expected to contribute two percent of their gross domestic product to the military.  NATO’s total budget is 20 times that of Russia and five times that of China.

It is time for the US to withdraw from NATO and for the alliance to disband. It serves no useful purpose and is a cause of global conflicts and militarism. 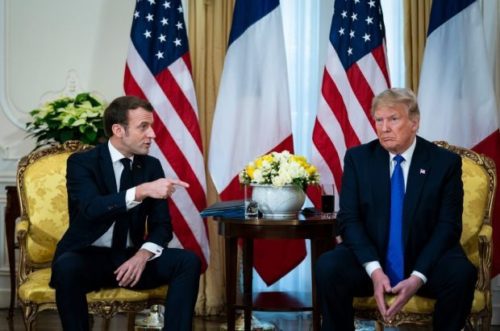 Internal Conflicts: An Alliance That Cannot Agree On The Definition Of Terrorism

NATO shortened its summit because internal divisions threatened to blow up the meeting.

On December 3, before the meeting, Trump and French President Emanuel Macron held a testy joint press conference. Macron told The Economist last month that NATO was suffering “brain death” because of the poor US leadership under Trump. Trump called Macron’s comments “very insulting” and “very, very nasty.” Macron and Trump are also at odds over Trump’s handling of the military conflict between Turkey and Syria, what to do with captured foreign Islamic State fighters and a trade dispute.

While combating terrorism is one of NATO’s supposed tasks, Macron said: “I’m sorry to say that we don’t have the same definition of terrorism around the table.” Macron warned that “not all clarifications were obtained and not all ambiguities were resolved”. Turkish President Recep Tayyip Erdogan threatened to hold up efforts to protect the Baltics against Russia unless the alliance branded the Kurdish militias as “terrorists.” He later backed off and allowed NATO to go forward with increasing battalions on Russia’s borders to “protect Poland and the Baltic region” against fanciful threats from Russia.

NATO is facing four crisis areas. First, a deep political crisis including quarrels among the leading military members, accusations, and substantial differences of strategy and purpose. There is also a legal crisis as it consistently operates outside – indeed in violation of – its own goals and purposes and in violation of the United Nations Charter. Third, a moral crisis resulting from its wars against Yugoslavia, Afghanistan, Iraq, Libya, Syria…all catastrophes that caused unspeakable suffering, death, and destruction to millions. And, finally, an intellectual crisis, as an echo chamber alliance that sings only one tune: There are new threats, we must arm more, we need new and better weapons and we must increase military expenditures.

NATO’s Search For A Purpose

Rather than facing the fact that they are no longer serving a useful purpose, and despite their internal conflicts, NATO leaders did manage to pull together a final declaration.

Their declaration pointed the way to NATO expanding its military forces on a global scale that will result in creating instability and military conflicts to justify their existence. NATO has a history of brutal military attacks, including the brutal bombing and destruction of the former Yugoslavia and the Balkans in the late 1990s, regime-change wars in Afghanistan, Iraq, and Syria, where it still has troops. And, the destruction of Libya that has left the country in chaos. NATO also worked with the United States in the violent coup in Ukraine in 2014.

NATO is playing its role as a military force that supports the US national security agenda. It continues to target Russia as “a threat to Euro-Atlantic security.” In reality, NATO creates that conflict by expanding eastward and putting weapons, bases, and troops along the Russian border. This violated a promise made by Secretary of State James Baker to the final Soviet leader, Mikhail Gorbachev. In a February 1990 meeting, Baker said three times that NATO would not expand, “not one inch eastward.”  NATO’s expansion has been a major provocation in generating the New Cold War with Russia.

NATO is planning Defender 2020 the third-largest military exercise in Europe since the Cold War ended. Some 37,000 troops from 15 NATO nations will be involved including some 20,000 US troops who will be flown from their bases in the United States. Scott Ritter points out the costs associated with these exercises against Russia are considerable, along with the cost of raising, training, equipping and maintaining forces in the high state of readiness needed for short-notice response to an imagined attack by Russia. This is part of increasing confrontations along Russia’s borders, where a total of 102 NATO exercises were held in 2019.

Earlier this month, NATO said they’d formally rejected a Russian request to prohibit installing missiles previously banned under the now-defunct Intermediate Nuclear Forces (INF) Treaty in Europe. The Russian request was made directly by President Putin, who fears “a new arms race” following both Moscow and Washington pulling out of the landmark 1988 INF treaty. Despite the facts, NATO blames Russia for the demise of the INF treaty. The French president brought out the reality: “Today would everyone around the table define Russia as an enemy? I do not think so.”

At this year’s summit, the NATO leaders “for the first time” discussed China as a collective security challenge. Prior to the meeting, CNN reported that NATO was falling in line with the anti-China strategy of the United States as NATO chief Jens Stoltenberg said the alliance needed to start taking into account that China is coming closer to us.’” He pointed to China “‘in the Arctic, … Africa, … investing heavily in European infrastructure and of course investing in cyberspace.”

Despite Stollenberg’s push to make China a target of NATO, their members could only agree on a  declaration that said: “China’s growing influence and international policies present both opportunities and challenges.” NATO members know that China is a benefit to the economy of their nations and that the Belt and Road Initiative connecting China to Europe through the Middle East and Africa is likely to be the defining source of economic growth this century.

NATO has also joined President Trump’s call for the militarization of space, declaring “space an operational domain for NATO” in their declaration.  Related to this, they also pledged to increase their “tools to respond to cyber attacks.”

In April we reported that NATO seeks to expand to Georgia, Macedonia and Ukraine as well as spreading into Latin America with Colombia joining as a partner and Brazil considering participation (not coincidentally, these two nations border Venezuela).

NATO is also bringing nuclear weapons to the Russian border. The Washington Post reported, “A recently released — and subsequently deleted — document published by a NATO-affiliated body has sparked headlines in Europe with an apparent confirmation of a long-held open secret: some 150 US nuclear weapons are being stored in Belgium, Germany, Italy, the Netherlands and Turkey.” Raising questions: Under whose control are these weapons held? Are host countries permitted access to US nuclear weapons? Are the host nations informed? Do NATO’s practice deployments involve nuclear bombs and missiles? The Brussels Times reported this summer that  “In the context of NATO, the United States [has deployed] around 150 nuclear weapons in Europe.”

NATO’s search for a purpose has led to a fundamental strategic review of the alliance’s purpose. Members know their mission is unclear and their purpose is questionable. 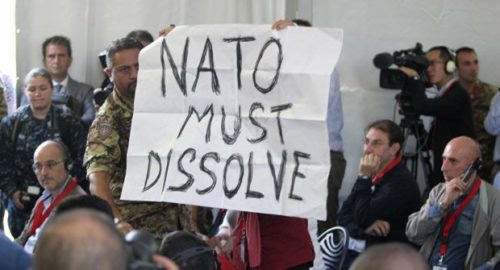 70 Years Of Destruction Is Enough, Time To End NATO

The 70th anniversary of NATO is an opportunity to honestly examine the history of NATO destabilization, wasteful military spending, and destructive military attacks. It is also an opportunity for people to urge the end of NATO. On April 4, 2019, NATO foreign ministers met in Washington, DC to celebrate its 70th anniversary, peace and justice activists held a week of actions in protest, disrupting meetings, shutting down an entrance to the State Department and taking the streets. This past week there was a large anti-NATO protest in London.

Scott Ritter believes NATO is as good as dead writing “NATO is on life-support, and Europe is being asked to foot the bill to keep breathing life into an increasingly moribund alliance whose brain death is readily recognized, but rarely acknowledged.”

Ajamu Baraka of Black Alliance for Peace declares: “Today [NATO] is the militarized arm of the declining but still dangerous Pan- European Colonial/capitalist project, a project that has concluded that the stabilization of the world capitalist system and continued dominance of U.S. and Western capital can only be realized through the use of force.”

It is time to demand an end to this destructive alliance as a step toward ending white supremacy, colonization, the destructive military-industrial complex, and the exploitative capitalist economy.