Labour’s policies were their strongest pull—even, or especially, their most socialist ones.

The similarities are impossible to ignore. Both are aging Boomers with long resumes in the struggle for social justice. Both have campaigned on platforms of left populism that take aim at the rich and powerful. And both have helped spark social movements led by activists 50 years their junior. Yes, Jeremy Corbyn and Bernie Sanders share much in common.

So, as we survey the rubble of the Labour Party’s epic defeat, which saw the largest Conservative landslide since Margaret Thatcher, it’s not unfair to ask: What went wrong? What can the the U.S. Left—and the Sanders campaign more specifically—learn from Corbyn’s loss? And, as the hot takes flood in from American pundits with little understanding of the British political system, it is equally important to ask: What should we not learn from this defeat, as well?

There are three key areas where learning will be essential, and contested:

I knew from my time canvassing for Labour in the UK as well as from reading the polls: Jeremy Corbyn was the most unpopular opposition leader in British history.

Pundits will point to individual traits to explain his unpopularity, ranging from his personality (a hippie! with no charisma!) to his policies (he’s a Commie!) to his political allies (he cavorts with terrorists!) to his base of supporters (they’re anti-Semites, the lot of them).

But speak with many of the Labour supporters who hit the doors in this election, and they will tell you that hatred of Corbyn was far more amorphous, more ineffable, more atmospheric than this. If you were to ask a given voter why they hated Jeremy Corbyn—and I had the opportunity to ask many such voters—they were liable to say: “I just do.”

The electoral costs of such unpopularity were extreme. According to one post-election poll, 43% of respondents voted against Labour because of the party’s leadership, compared to just 17% for its stance on Brexit and 12% for its economic policies.

What could have produced such an atmosphere of contempt? The short answer: a sustained campaign of character assassination in near every UK tabloid, mainstream newspaper and otherwise respectable publication against Jeremy Corbyn.

The case of anti-Semitism is an instructive one. Most British voters now believe that Corbyn is an anti-Semite, but few can point to an example of his anti-Semitism. Why, then, do they believe it? Because the claim was asserted, over and over, in the papers. If Corbyn weren’t anti-Semitic, voters were right to ask, why would so many stories get written about it so many months in a row? The prophecy was self-fulfilling.

Supporters of Bernie Sanders complain about his absence from mainstream reporting. CNN and MSNBC are liable to throw Joe Biden, Pete Buttigieg and even Elizabeth Warren onto their chyron, but ignore Sanders, despite his consistent polling near the top of the Democratic field.

But Sanders supporters appear unprepared for the next phase of this process, when he moves back into frame but straight into the crosshairs. It’s been said before but bears repeating: We have seen only a fraction of the stories that the press will use to bring down Bernie Sanders.

The U.S. Left needs to prepare for this, diligently and creatively. The Corbyn camp was far too quick to the bunker: “It’s a conspiracy by the billionaire media.” That may have been true. But the U.S. Left will need a much more proactive strategy for combatting such destructive stories and presenting an alternative vision of Sanders’ progressive personality.

Sunlight is indeed the best disinfectant—only a full-throated challenge to mounting controversy can kill it off. And that challenge may require progressive candidates to go on all available media outlets—including Fox News—and do it themselves.

The Labour Party electoral coalition is strikingly similar to that of the Democratic Party, in both its general composition and its direction of travel: working-class communities with low levels of education and, increasingly, wealthier city-dwellers with high levels of education.

It’s a coalition that fell to pieces in Thursday’s election. The Tory landslide was a working class wave: the Conservative Party broke through traditional Labour-voting working-class regions, formerly known as the ‘Red Wall,’ to win scores of new seats.

How did Boris Johnson—an Eton-educated, silver-spooned, elite-obsessed Tory—manage to make such gains against a Labour Party explicitly committed to the cause of the working class?

The short answer is Brexit. The question of European Union membership—or more accurately, of whether or not the British government would go ahead with the referendum decision to leave the EU—cut straight through the Labour coalition.

If the Labour Party had embraced Brexit and served as its parliamentary handmaiden, the Liberal Democrats were waiting in the wings to claim the urban middle classes as their own.

If the Labour Party moved to stymie Brexit, however, they would risk losing their Leave constituencies to a Conservative Party that promised to deliver Brexit faithfully. The Labour Party ultimately took the latter risk, and lost predictably as a result.

The good news for Democrats is, of course, that the United States has no Brexit. Nor is the Democratic Party threatened by an adjacent challenger like the Liberal Democrats.

But Americans do have an issue that closely resembles Brexit: the election of Donald Trump.

Many pundits will compare Boris Johnson and Trump, in style as in haircut. But the Brexit-Trump comparison is by far the more relevant. A vote for Trump, like a vote for Brexit, was meant to send a shock to the system and a middle finger to its political establishment. That is why Trump voters, like Brexit ones, rarely care for the immediate consequences of their vote choice: the vote was all that mattered.

If progressives are searching for lessons, then, impeachment may be a good place to start: a political strategy that could ultimately turn out to be both myopic and fruitless.

Like calling for a People’s Vote, impeaching President Trump could be seen as disrespectful to the rebel vote of the 2016 election, and could deepen the sense of discontent that gave rise to Trump in the first place. To keep its coalition together, Democrats will need to find a path to détente between its competing demographics. Impeachment alone is unlikely to be the answer.

The commentariat is already swarming with takes about the peril of far-left policies. Socialism, the argument goes, was Corbyn’s Achilles heel. And it is likely to be much worse in the United States, where the S-word is wielded with much greater psychological power and historical weight.

The problem with this argument is that it’s wrong. Labour’s policies were their strongest pull—even, or especially, their most socialist ones: the nationalization of industry. A recent poll found 84% of respondents supported nationalizing the water industry. In another, 77% supported the same for energy and 76% for rail.

The issue was that, in the end, it didn’t really matter. The raft of policies that the Labour Party ushered into its manifesto—the stuff of a progressive wonk’s dreams, and the hard work of so many brilliant and creative young policy thinkers in the UK—simply did not bring people to the polls in their favor.

Simply put, socialism was not too strong an ideology, but too weak an electoral strategy.

No, spin still seems to dominate our politics: dirty, rotten spin. Johnson ran an outright corrupt campaign, disseminating lies, shirking accountability and banking on the likelihood that people wouldn’t care. It turns out that 43.6% of them didn’t—choosing to support the Tories anyway.

The lessons from this particular electoral injustice are vexed. But one is clear: Plans and policies do not deliver majorities—even if their details determine how you then govern. To win, then, progressive Democrats must get off of the page and into the street, with a message that is as simple as it is emotionally powerful.

Liberal pundits are going to stop at nothing to swing the Democratic Party back toward the center—and Corbyn’s loss will be powerful ammunition. Progressives cannot sweep it under the rug. The lessons are there, if we are willing to learn them. But in this moment of despair, those of us on the Left must keep repeating to ourselves, over and over: We can win, and we must. 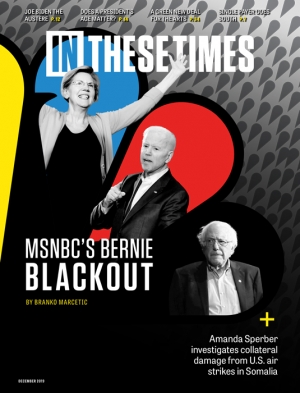