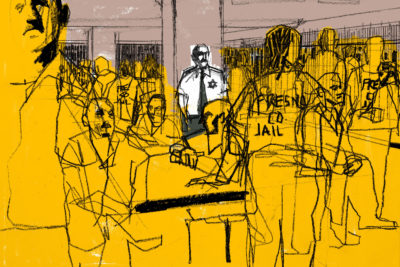 Two summers ago, the board of supervisors in Contra Costa County, California, faced a packed meeting room. On the agenda was a proposal to divert $1.5 million in state taxpayer money intended to ease jail overcrowding to other priorities of the local sheriff’s office.

Without the funds, Assistant Sheriff Matthew Schuler said, street patrols across the county would be sacrificed. “That loss would be drastic,” he told the board.

But about two dozen civic, religious and community leaders pushed back, saying the money was desperately needed for where it had been earmarked: jails, paying for probation and expanding social services.

Moving those funds to pay for patrol officers was “truly insulting,” one speaker said. A reverend called the proposal “morally repugnant.” A woman stood at the podium and said Contra Costa County already gave enough money to law enforcement. The county, she said, was a “candyland for sheriffs.”

“Our sheriff has not served the community well,” Elsa Chinea Stevens, a resident, told the supervisors. “We should not break the law to reward him by misappropriating funds.”

The board then unanimously approved the transfer.

Though local governments routinely move money from one law enforcement purpose to another, doing so with realignment funds may violate state law. The California Constitution prohibits county officials from using those dollars to cut their own costs elsewhere. But lax spending rules and limited scrutiny from both state and county officials have allowed just that, a McClatchy and ProPublica investigation found.

In Shasta County, for example, the civil grand jury — a group of volunteers that inspects parts of local government — said the sheriff’s office broke the rules when it tapped realignment cash instead of county funds to pay for its entire jail work-release program.

And a civil grand jury in Monterey County found that although the sheriff received funds for a specialist to direct pretrial inmates to education courses, his office instead used the money to cover a guard’s salary.

Both juries requested an audit. Local officials in both counties denied any wrongdoing.

“The state should have been asking for supportive documents every year,” said Moorlach, a former Orange County supervisor who has been critical of local realignment spending. “That’s just a simple management program.”

McCarty has pledged to reintroduce legislation next year that would allow county supervisors or voters to create sheriff oversight agencies. The bill stalled in the state Senate this year.

To be sure, many counties have created programs for education, vocational training and addiction treatment with the state funds. Those programs all appear to follow the spirit of the 2011 legislation, which gave county jails and probation departments huge new responsibilities along with the infusion of cash.

But in Contra Costa County, a citizen’s group that makes recommendations about realignment says potentially illegal spending has gone on for years. The group in 2016 said there was no explanation for how any of the outlays improved rehabilitation or reduced recidivism, core tenets of realignment. It called for a formal audit.

No such county-level review has actually occurred, the auditor’s office said.

Phil Kader oversaw distribution of the county’s realignment money as chief probation officer until his retirement in 2016. In an interview, he said he shared the citizen group’s concerns.

“I just didn’t feel this revenue should be used to supplant existing positions or things that the county was already going to spend the money on,” Kader said.

“Why Did the State Let It Get That Way?”

California lost its decadeslong legal fight on prison overcrowding in May 2011, when the U.S. Supreme Court required the state to reduce its prison population by 46,000 inmates. Lawmakers decided to do so by diverting people to county jails.

Proposition 47, a 2014 ballot measure that downgraded an array of drug and property crimes to misdemeanors, released much of the growing pressure. The average daily statewide jail population fell, to 73,121 the following year, when the changes took effect. (That was still higher than before realignment.)

But while sheriffs’ overall workload shrank, their cut of the state money did not.

In the four years since Proposition 47 passed, sheriffs in the 15 largest counties have received nearly $2 billion in realignment funds. That equates to 47 cents of every realignment dollar, according to a McClatchy and ProPublica analysis of budget data. Meanwhile, probation departments in those counties, which have seen an uptick in cases, have received roughly half what sheriffs have.

Those allocations stem from county committees created under realignment legislation. The so-called Community Corrections Partnerships, made up of leaders from departments in each county, field budget requests, sometimes debate them and forward their recommendations to county boards of supervisors.

The committees were supposed to limit the influence of elected sheriffs and district attorneys, and to encourage spending on social services and alternatives to incarceration, said Craig Cornett, former budget director for the California State Senate. “We set up certain walls within it, partly in order to just keep the law enforcement crowd in check.”

The state can audit how local governments have used the realignment cash, but it has not done so in the eight years since the reforms began. H.D. Palmer, a spokesman for the California Department of Finance, said officials crafted realignment to ensure the decision-making authority rested with the counties, and a state-level examination would amount to second-guessing local elected officials.

But some state lawmakers say such an accounting is long overdue.

“Why did the state let it get that way?” asked Moorlach, the senator who sits on the upper chamber’s Public Safety Committee. “Why weren’t they requesting an annual financial statement or a report that showed where the money was going or why it was justified?”

Counties release broad outlines of how they parcel the money out every year, but their disclosures provide little to no detail on how agencies spent the funds and whether they’ve reduced recidivism or improved social services. State finance officials said anyone can read those summary documents and raise questions themselves.

Matt Cate, who was California’s corrections secretary at the launch of realignment, said sheriffs are powerful political figures in the state and Brown was working to win their support for his plan.

But there was another purpose behind the decision to give county officials full control over the state cash: No one knew precisely what would happen when tens of thousands of people were diverted from the prisons.

“To Gov. Brown’s credit at the time, he decided to give locals the discretion to allocate the money,” Cate said, “because we were certain that we were going to get some things wrong.”

Contra Costa County is among the wealthiest counties in California. Its 1.1 million residents have seen an economic boon in recent years, as more and more well-heeled tech workers spread across the San Francisco Bay Area. Its strong tax base is charting a “steady, sustainable path,” according to the county’s recent budget analysis.

It has also been a hub for some progressive criminal justice reforms.

Notably, the courts have long used something called split sentencing, which shortens offenders’ time in jail and instead places them on community supervision with probation. When the number of inmates diverted from prisons to county jails peaked, the county’s use of split sentences prevented it from facing the dangerous overcrowding seen elsewhere in the state.

The following year, he spent an additional $3.7 million in realignment money to upgrade the security hardware in the county’s largest jail, a relatively modern facility on the shores of the San Francisco Bay, according to county budget and bid documents. Workers replaced the locks, installed an infrared alarm system, painted the cells and renovated the visiting space.

At the time, however, the facility housed just three dozen inmates, county records show. The rest of the jail’s population consisted of roughly 200 federal immigration detainees, who were being held under a partnership with U.S. Immigration and Customs Enforcement.

The sheriff ended the contract with ICE last year after a political uproar, but not before negotiating with the county board of supervisors, which pledged more realignment money to make up for the lost revenue from the federal agency. Livingston, who is also president of the California State Sheriffs’ Association, declined to be interviewed for this story and did not respond to written questions.

At the July 2018 board of supervisors meeting, residents protested the proposal to transfer state funds to the sheriff, but the county administrator, Twa, disputed allegations of misappropriating money. He said realignment was about more than rehabilitation, that the funding was to offset new costs that shifted from the state to the county. “Essentially,” Twa said, “this falls within the realm of that.”

Board Chair Karen Mitchoff said if they didn’t move the money, they would lay off patrol deputies. “I appreciate what you are telling us about reentry,” Mitchoff told the room, “but we also have to protect the rest of Contra Costa County.”

The board unanimously approved the transfer. In an interview this year, Mitchoff defended the vote. “We’ve got a very ethical county administrator,” she said. “He would never recommend something to the board that was illegal.”

Others, however, are still fuming.

“It was supposed to be supporting community members and reducing incarceration,” said Melvin Willis, a city councilman in Richmond, “not supporting the incarceration business.”

Under realignment, probation departments took on additional work, with the goal of advancing rehabilitation and reintegration for offenders. That pressure has only grown in recent years; the number of new realignment-related probation cases has increased 7% statewide since sentencing changes kicked in in 2015, according to data from the Chief Probation Officers of California.

And yet, probation’s share of realignment funds has barely changed.

Different counties have different needs, said Stephanie James, president of CPOC, the state’s probation lobbying group, but paying for probation instead of incarceration is what is necessary for success.

“The local jurisdictions who have invested in probation and the services we provide have seen the type of progress envisioned under realignment,” James said in a written statement.

This year, in Contra Costa County, probation received close to $4 million, mostly for probation officers, with the remaining money for basic necessities like bus tickets and group meetings. The sheriff’s office got twice as much, budget records show.

County officials who focus on reentry for inmates say they need to add significantly more job training, housing and inmate transition programs, according to their five-year plan.

The county’s Department of Education started a program in 2016 that prepares jail inmates with job and life skills before their release from jail. The pilot project, funded without realignment money, saw quick success. But the lone reentry specialist quickly became overwhelmed with more than 100 cases at once.

Patrice Guillory, managing director of Contra Costa County Programs and Services, serves as an adviser to the county on realignment spending. The county doesn’t track whether its spending is accomplishing what it needs to, she said. That has concerned her for years.

“These dollars aren’t always going to be plentiful,” Guillory told the county’s realignment committee this month, before it recommended giving the sheriff more money. “We have to be very cognizant about whether or not we’re making the kind of impact that we say we want to make.”

ProPublica and The Sacramento Bee are spending 2019 examining overcrowding, resources and inmate treatment in county jails across California. Share your story with us here or get in touch with the reporting team by emailing CaliforniaJails@propublica.org or calling/texting 347-244-2134. And stay updated with our reporting by signing up for our newsletter.