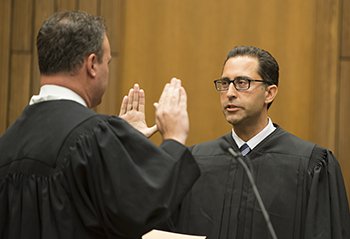 A federal judge in California said Wednesday, February 12, he will likely overturn a new Trump Administration rule that critics say was meant to undermine home-care worker unions, potentially averting a $6.5 billion shortfall in federal funding for disabled and elderly Medicaid beneficiaries in some union-friendly states.

The final rule prohibits states from engaging in a longtime practice of deducting union dues and health insurance premiums from home-care workers’ paychecks, which are funded through Medicaid.

The final rule prohibits states from engaging in a longtime practice of deducting union dues and health insurance premiums from home-care workers’ paychecks, which are funded through Medicaid.

California and five other states (Connecticut, Illinois, Massachusetts, Oregon, and Washington) sued the U.S. Department of Health & Human Services (HHS) after the rule was announced last May. They argued that this rule’s enforcement would require them to either “disrupt well-established collective bargaining relationships” that had improved the quality of in-home care since the 1990s, or forfeit billions of federal Medicaid dollars.

The state plaintiffs say HHS and its secretary, Alex Azar, purposely misread a 1972 provision of the Medicaid Act forbidding payments to third parties for Medicaid services in order to achieve “anti-union objectives.” Home-care workers represented by the Service Employees International Union and AFSCME United Domestic Workers joined the suit days after it was filed, similarly accusing the agency of acting out of “a desire to harm unions.”

The home-care provider workforce is nearly 90 percent female, 62 percent people of color, and 31 percent foreign-born. Most earn poverty-level wages, according to statistics cited in an amicus brief filed by the National Domestic Workers Alliance and the National Employment Law Project.

Many home-care workers also don’t have bank accounts, and paying their monthly dues via check puts their union membership and benefits at risk. Plaintiffs point to SEIU Virginia 512, which succeeded in signing up only 41 percent of its members to an alternate payment system after Virginia had stopped making paycheck deductions.

“Under any alternative system, there is a substantial risk that providers will miss dues payments, putting the substantial benefits they gain from union membership at risk,” the suit states.

At Wednesday’s hearing in San Francisco federal court, U.S. District Judge Vince Chhabria said he didn’t buy HHS’s Medicaid Act interpretation and was leaning toward vacating the rule and sending it back to the agency for a second pass. He stopped short of endorsing the plaintiffs’ request for an injunction blocking the rule altogether, pointing out his proposal would render it unenforceable.

“There appears to be an extreme amount of confusion embedded in this final rule, and that confusion supports the idea that this statute is ambiguous,” Chhabria said of the Medicaid Act provision under dispute. He added that, though the provision’s language was ambiguous, “the legislative history pretty strongly supports [the plaintiffs] and raises questions in my mind about whether the secretary could win on Step 2 in a future case.”

The state plaintiffs provide in-home care services to more than 637,000 Medicaid beneficiaries, delivered via a “consumer-directed” personal assistance service model meant to help seniors and people with disabilities live independently in their homes. Under the model, states set wages and benefits and process paychecks, while beneficiaries hire, fire, and supervise their home-care providers. Directing their own care maximizes autonomy and helps avoid institutionalization, rights guaranteed by the Americans with Disabilities Act and the U.S. Supreme Court’s 1999 decision in Olmstead v. L.C.

More union workers said they expected to be employed in the home-care industry in a year compared to non-union workers.

Low wages have long characterized the home-care worker industry, driving high turnover and a shortage of qualified workers. One 2019 report found that home-care workers in the United States typically earn $11.52 an hour, or about $16,200 a year. In two-thirds of states, home-care workers earn below 200 percent of the federal poverty line for people in single-person households working full-time. More than half of these workers live in households that receive government assistance, including food stamps.

Turnover in the field is endemic. According to a 2009 report from the Center for Labor Research and Education at the University of California, Berkeley, between 40 percent and 60 percent of home-care workers quit their jobs after less than one year, and 80 percent to 90 percent quit within the first two years.

During the court hearing, U.S. Justice Department attorney Carol Federighi, who represents HHS, asked Chhabria to remand the rule but allow the agency to enforce it while revisions are being considered. She argued that vacating the rule would be disruptive, even though it has not yet been enforced.

“In what way would it be disruptive to maintain the status quo while the secretary goes back and thinks about the policy implications of all this?” the judge asked, requesting an example of how HHS’s revised rule would justify a block on direct deductions. “If you stick to the direct payment model, there’s less opportunity for fraud,” Federighi replied, adding that states might “funnel” too much money into union coffers. “You introduce more players, so there are more opportunities for fraud.”

Chhabria asked, in turn, “Is there any indication . . . that there has been fraud in the thirty-some years that this practice has been undertaken of states withholding union dues?” Federighi admitted that there was not.

Outside the courtroom, Altshuler Berzon LLP attorney Stacey Leyton, who represents AFSCME Local 3930, seemed pleased with Chhabria’s tentative ruling. “We would feel like we’re on solid legal ground” for making deductions, she said.

Chhabria didn’t say when he would issue a final ruling.