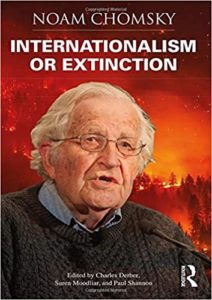 The venerable professor Noam Chomsky continues to speak and write about human rights, equality, and improving the lot of the working class. But his concern focuses on the exigent: the survival of the human race. This is one of many reasons I appreciate Chomsky. I may differ, foolishly or not, with some of his conclusions, but I admire that Chomsky didn’t just slide into a cozy retirement away from the turmoil in the world. He is a warrior, a warrior for peace and social justice, who continues to fight the good fight.

In the important booklet Internationalism or Extinction (Routledge, 2020), Chomsky identifies three great threats to the continuance of the human race: the nuclear threat; the Anthropocene, i.e., the threat posed by human-caused climate warming; and the hollowing out of democracy.

Chomsky presents his views buttressed with a bevy of facts, with a levity, and without offering false hopes. But he does not surrender to the inevitability of human demise as long as numbers of humans band together to resist, and as long as the possibility of increasing mass numbers of people will emerge to oppose the militaristic, capitalistic order.

And it is not just the extinction of humanity that is threatened but also other species “that we are destroying with abandon.” (p 21)

Chomsky knows well that the US political system is one dominated by two business parties; however, he focuses his criticism primarily at the Republican establishment: “a major political organization in the most powerful country in the world’s history is quite literally dedicated to the destruction of much life on Earth.” (p 22) Literally dedicated? Chomsky claimed a “Republican denialism”; thus, it seems an unwitting destruction that Republicans bring about rather than a dedication to the destruction. Or is it a willful blindness fueled by the greed for profits, such that the consequences, whatever they may be, be damned? Unwitting or dedicated, the threat of extinction demands study (and it has been studied to death), demands making public the results of the studies, and demands action on solutions to avoid the end of the human race.

When has the Democratic establishment meaningfully sought to dismantle the government-military-industrial complex, oppose regime change wars, and agree to the elimination of nuclear weapons? Obama argued for a reduction in nuclear arms but also put his signature to a trillion dollar upgrade of America’s nuclear arsenal. Do the Democrats meaningfully fight the interests of Big Oil? I would agree that compared to Republicans the difference is palpable. After all Obama did sign on to the Paris Climate Agreement. There is some difference between the parties, but in some respects the Democrats may be worse. As far as hollowing out so-called democracy in America, the Democratic establishment refused to accept the results of the Electoral College in 2016 presidential election. It blamed Russia, and it still does despite no solid, or flimsy, evidence to support such an allegation. Yet Chomsky continues to advocate strategic lesser-evilist voting in swing states. There is a logic in this only so far as the verisimilitude of the premise that the Democratic Party is substantially better for the American people and the world than the Republican Party holds true. This contention is debatable though.

The dangers pointed out in Internationalism or Extinction demand the predicaments being brought to widespread consciousness; the foremost need is to tackle the predicaments. One can quibble about who/which party deserves most blame afterward.

Chomsky states it is a miracle that the human race hasn’t been wiped out so far, and humanity can not continue to rely on miracles. As the well known aphorism states: if one continues to play with fire, sooner or later one will get burnt.

Among the solutions Chomsky mentioned in Internationalism or Extinction are the formation of a world government. He cites a UN resolution for an international treaty banning nuclear weapons in October 2016, was “expected to gain the support of more than 120 states but without large-scale public support” (p 30).  In fact, the UN General Assembly did adopt this resolution in 2017 (with 123 states voting in favor, 38 against, and 16 abstaining).

As for the lack of large-scale public support, Chomsky identifies this dynamic in the US, as

much of the population remains where it was, culturally traditional and pre-modern in many respects. For example, for 40% of the US population, these issues of species survival are of little moment because Christ is returning to Earth… and then all will be settled… (p 43)

Some might chortle or guffaw, but this is unhelpful in persuading people to consider the predicament of extinction. Chomsky says this reality needs to be understood. “[I]t has to be understood that churches really mean something to the people, plenty of people, including the Trump supporters.” (p 57)

The institute professor calls for organization and activism. “Proper approaches to the problem take effort, sensitivity, and understanding…” (p 59) Notably, Chomsky is especially critical about the intelligentsia calling its lack of understanding “appalling.” (p 61)

One intellectual did understand the danger posed by nuclear weapons and militarism. The pacifist physicist Albert Einstein pointed out: “You cannot simultaneously prevent and prepare for war.”

Elementary logic has posited the Precautionary Principle: that humanity not introduce devices or systems into the environment unless demonstrated to be harmless to humans.

When the Precautionary Principle has been ignored and dire consequences have transpired as a result, it is incumbent that right-thinking people undo the mistakes and tread a new path that upholds principles meant to safeguard the Earth and its inhabitants.

In this vein, Internationalism or Extinction is a primer for all humans concerned about the viability of current and future generations to become informed and engaged.

This article was posted on Tuesday, March 10th, 2020 at 6:06am and is filed under Book Review, Capitalism, Democracy, Global Warming, Nukes, Solidarity.