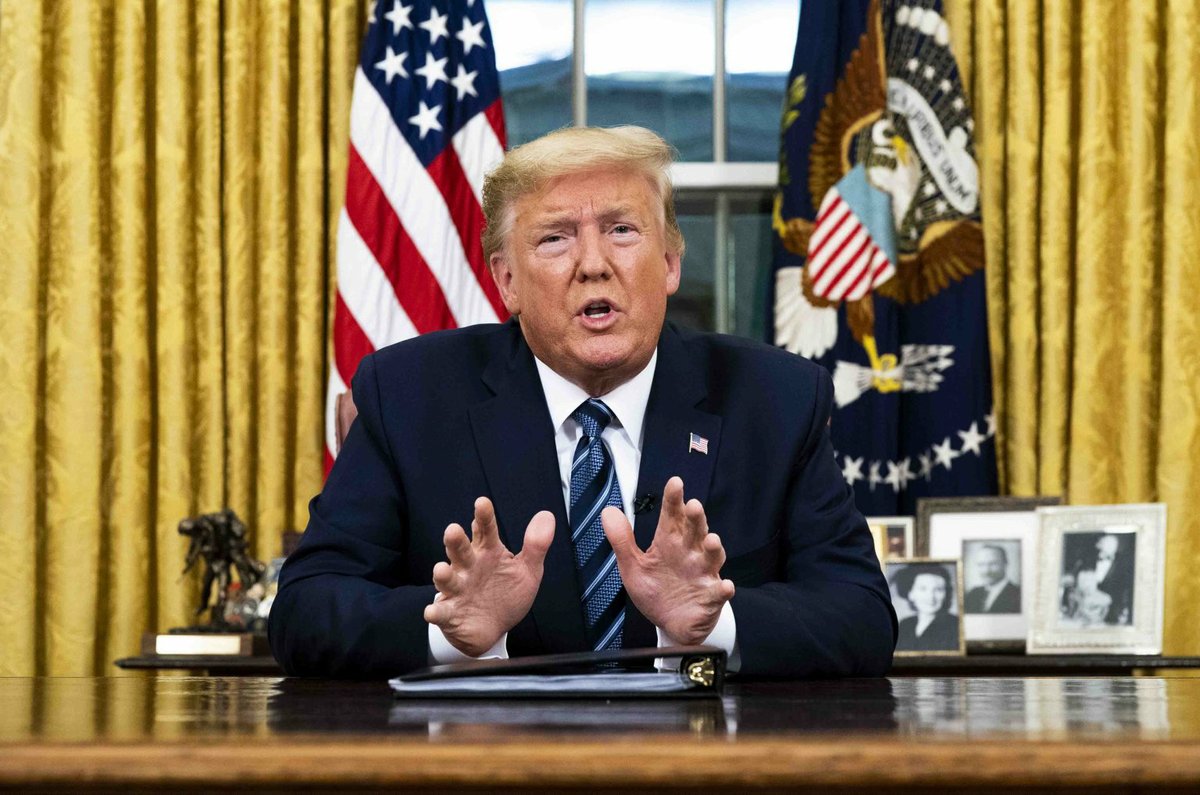 This week marked a turning point. Even President Donald Trump seemed to recognize it. In his address to the nation on Wednesday night, Trump appeared off-balance, his voice dropping to a whisper at several points as he acknowledged the seriousness of the global COVID-19 pandemic, after weeks of calling the disease a hoax, then downplaying it.

The stock market collapse (Thursday was the Dow’s worst day in thirty-seven years) has apparently shaken Trump out of his denial, although the President was still spinning; his speech mostly focused on how “great” his administration’s response has been.

His xenophobia is also still intact, as he called COVID-19 a “foreign virus,” and blamed European travelers for “a large number of new clusters in the United States.”

His xenophobia is also still intact, as he called COVID-19 a “foreign virus,” and blamed European travelers for “a large number of new clusters in the United States.”

It was a ridiculous response to a disease that is rapidly spreading across the globe and does not discriminate based on race or national origin.

Also ridiculous is Trump’s thirty-day travel ban from European countries. In announcing the ban, he exacerbated economic anxiety by wrongly announcing that it would include large shipments of cargo (a claim the White House later walked back), and, nonsensically, he excluded the United Kingdom, which has had 590 COVID-19 cases, but also several important Trump resorts.

It says a lot about the President’s credibility that the loophole in his ban led to instant speculation that Trump’s main concern was to protect his own investments.

Watching Trump fail to reassure the nation reminded me of a friend’s reaction to the 2000 election of George W. Bush. She described sobbing in front of the television as she watched election returns. Her husband put his arm around her and told her, “Don’t worry. As long as there’s no big crisis, it will be alright.” Then came 9/11. When Donald Trump won, as my friend sat watching election returns, her husband walked into the room, and she immediately snapped,  “Don’t say a thing!”

Now here we are. The hollowness of Trump’s Make America Great Again rhetoric is exposed in a real crisis which is touching all of us directly, as we receive hour-by-hour notifications of event cancellations and new cases in our local communities.

If ever we needed steady leadership, now is the time.

But instead of FDR’s fireside chats, we have Donald Trump’s fidgety self-aggrandizement.

The last two Democratic candidates for President at the end of a contentious primary season each gave his own speech on COVID-19 on Thursday.

Each pointed out the weaknesses of Trump’s response.

Joe Biden reflected on Trump’s incomprehensible decision to close the office that was launched when he was Vice President under President Barack Obama specifically for the purpose of combating epidemics like the one we now confront.

Biden’s speech struck a strong contrast with Trump’s, whom he derided for his “adversarial relationship with the truth” and “hollowing out our agencies” and “disparagement of science.”

Americans who are hurting, and young people who are facing an insecure future, a deteriorating planet, and crushing debt, are in no mood for incrementalism and nostalgia.

Declaring that “protecting the health and safety of the American people is a President’s most important job,” Biden announced a detailed plan including creating hundreds of mobile testing sites, deploying the Department of Defense and FEMA to build and staff emergency medical facilities, and “both a permanent plan for paid sick leave and an emergency plan now.” Ultimately, he said, we need a vaccine that is both “widely available and free of charge.”

Making his pitch to working-class voters (and Bernie Sanders supporters), Biden noted that the most vulnerable to COVID-19 are those who can’t afford to take a day off from work. He proposed no-interest loans and denounced Trump’s tax cut proposal saying what we don’t need is “another tax cut for Google or Goldman.”

But Biden also positioned himself as a better leader for Wall Street than Trump, saying “markets will respond to strong, steady, capable leadership” and efforts to “get to the root of the problem, not cover it up.”

Finally, Biden pointed out that disease is a global problem, and isolationism is an unacceptable response. He called for U.S. leadership in fighting disease around the globe. “By cutting our investment in global health, this administration has left us woefully unprepared,” he concluded.

Sanders hit many of the same notes, denouncing the Trump Administration’s “incompetence and recklessness [that] have threatened the lives of many, many people.”

Sanders went longer on specifics, though, calling for an emergency, bipartisan convening of experts and for Congress to take responsibility for managing the fight against COVID-19, given the administration’s demonstrated incompetence.

Sanders called for setting up national and state hotlines, community health care centers, and mobilizing medical residents to deal with the health care staffing shortage, as well as emergency shelters, and food aid. Like Biden, he focused specifically on small business owners and restaurant workers, but expanded on those categories to include incarcerated people, people trapped in immigrant detention centers, and the homeless. He also called for a moratorium on evictions.

The United States’ great disadvantage in combating disease, Sanders pointed out, is that “we don’t guarantee healthcare to all people as a right.”

Hitting on a familiar campaign theme, he added, “So while we work to pass Medicare for All” we must offer free testing, free health care for the sick, and emergency funding for paid family leave (more or less what Biden also offered).

“In the future,” Sanders concluded, “we need to guarantee in this country that every single person is guaranteed the healthcare that they need.”

Both candidates offered a stark contrast with Trump. But this is also a pivotal moment for the Democrats.

The fight between progressives and moderate voters who support the establishment candidate is almost over. Biden has won the most delegates so far, and he has momentum.

He will likely wrap up the nomination, and even Sanders seemed to acknowledge as much in a speech to supporters after losing the Michigan primary this week. In that speech, Sanders posed a series of questions to Biden about how he would deal with the urgent crises of the moment, including climate change, shrinking opportunity, and growing inequality.

Biden, who has been running as the candidate who would lead us back to the good old days of the Obama Administration, as if the Trump years were just a bad dream, would do well to listen to Sanders and the movement he is leading. Americans who are hurting, and young people who are facing an insecure future, a deteriorating planet, and crushing debt, are in no mood for incrementalism and nostalgia.

Americans who have remained comfortable through the Trump years, including a lot of political pundits, don’t care to be afflicted by Sanders’s Cassandra-like warnings. But he’s right.

This is no time for leadership that lacks vision. We need sweeping, structural change, as Elizabeth Warren put it, to address the threats on our doorstep. And if the Democrats don’t offer that, another right-wing demagogue surely will.

My friend might tell me not to say it, but there will be a next crisis, and a next demagogue—and it could be even worse than COVID-19 and Donald Trump.

This article appeared in the Wisconsin Examiner.