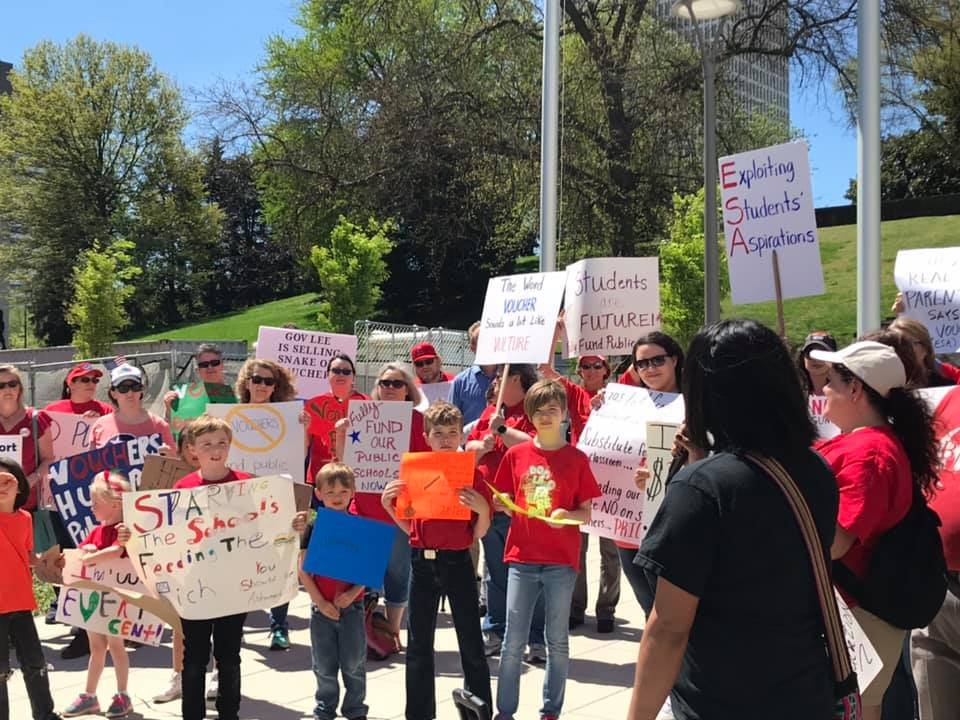 No one could have predicted that a scandal involving sex in the bathroom of a hot chicken restaurant would lead to Republicans in the Tennessee General Assembly turning on their governor.

In 2019, Tennessee Governor Bill Lee secured his signature policy: school vouchers. Since then, it has generated nothing but controversy. In fact, when the GOP Speaker of the House resigned last year, politicians chose an anti-voucher Republican to take his place.

Representative Cameron Sexton, the new House Speaker, is the son of a public school teacher and a long-time opponent of school vouchers. His remarks indicate that he wishes to slow down the governor’s march toward implementing the program.

Now another GOP heavyweight, Caucus Chair Jeremy Faison, is also expressing doubts about the voucher program, which he voted for less than a year ago. Faison is joined by fellow Republican Representative Matthew Hill, who chairs the legislature’s Appropriations Committee and has said there are “real problems” with rolling out the program this year.

Governor Lee won his 2018 election by a 20 percent margin. His party controls a majority in both chambers of the Tennessee General Assembly, the General Assembly and Senate. He made passing vouchers his top priority, and he got it done. So why the backlash?

The trouble started when the House of Representatives voted on the voucher legislation.

Then-Speaker Glen Casada, a Republican, held the vote open for forty minutes while he called individual legislators to a spot just outside the chamber. There, he reportedly offered incentives including removing their counties from the program and, in one case, a promotion to General in the Tennessee National Guard, to convince members to change their votes.

At the time, the legislation needed one more affirmative vote to pass. This literal backroom dealing is now the subject of investigations by both the FBI and its local equivalent, the Tennessee Bureau of Investigation, or TBI.

Tennesseans are not particularly fond of vouchers, but it’s difficult to imagine the current outrage without the dirty tricks employed by Casada.

Another factor making it difficult for vouchers to move smoothly through the process in Tennessee has been grassroots resistance. Ahead of the voucher vote, parent groups and civil rights organizations joined together to express opposition. But those groups didn’t stop just because a group of powerful white men got their way the first time around.

Rather, they kept organizing. Using social media to stay connected, groups like Tennessee Teachers and Parents Against School Vouchers and Tennessee Strong focused on the long game—stopping implementation of a voucher plan expected to cost as much as $335 million.

The unrelenting focus of grassroots activists helps keep every single misstep of the voucher scheme in the public eye.

The unrelenting focus of grassroots activists helps keep every single misstep of the voucher scheme in the public eye. Whether it’s the no-bid contract for the vendor overseeing administration of the program, or how the scheme’s rules were written in a way that allows for discrimination, no bad voucher deed goes unreported.

Along with legislative roadblocks, a pair of lawsuits threatens to derail the GOP voucher train. The first was filed by school systems in Nashville and Memphis. It’s worth noting that these are only two school systems in the state where vouchers are being tried, and that they both primarily serve students of color, according to state data.

The latest lawsuit was filed on behalf of parents in Nashville and Memphis and can be tied to the strong connections forged by parents in both cities last year. As a result, Lee’s scheme is being called into question by the very communities he supposedly wants to help.

As U.S. Education Secretary Betsy DeVos continues her push to “voucherize” public education across our country, the powerful grassroots resistance to school privatization in Tennessee offers a road map for protecting public schools. The bottom line: Unrelenting vigilance is required if we are to preserve public education for all students in America.