The coronavirus epidemic is creating an ongoing teachable moment that could be used to transform the US economy. COVID-19 and the oil war are triggers leading to a recession that has its roots in record corporate and personal debt, longterm low wages and an artificially-inflated stockmarket. The shortcomings of US economic policy, the healthcare system, and workers’ rights are being magnified by the current crisis.

Epidemiologists are reporting the coronavirus epidemic will last months, maybe more than a year. A survey of prominent academic economists released on Thursday found that a majority believe even if the outbreak proves to be limited, like the flu, it is likely to cause a “major recession.”

The teachable moment is an opportunity for people to understand more clearly why we need healthcare for all through national improved Medicare for all, why workers need paid sick and family leave so people can stay home from work and not infect others and why we need to end the extreme wealth divide so all people have the housing, food, healthcare, and income they need to thrive. Already, corporate media is reporting on “disaster socialism” and saying “everyone’s a socialist in a pandemic.” The failures of neoliberal capitalism are obvious. Tax breaks for corporations and the wealthy and trickle-down economics have failed.

People have significant power to demand change. Consumer spending accounts for approximately 70 percent of all economic growth. If consumers do not spend, there will be a recession. This translates into people power. If people go on a spending strike, they will impact the economy in ways the elites cannot ignore. It’s time to demand an economy that serves the people. 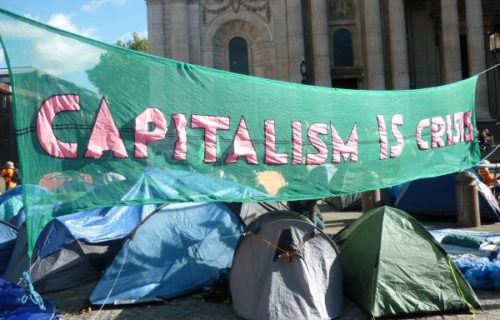 The Economic Collapse Has Just Begun

This week, we interviewed economist Jack Rasmus on the Clearing The FOG podcast (available Monday night). He wrote last Sunday that a financial collapse was underway pointing to the combination of the coronavirus and the oil war.  In the interview, he pointed to weaknesses in the economy that show the falsity of government officials who claim “the fundamentals are sound.” Problems include record consumer, corporate and government debt, stagnant wages, workers who have not recovered from the last economic collapse, and financial markets addicted to trillions from the Federal Reserve. Even before the current collapse, college debt, unaffordable healthcare, and inadequate retirement funds were among the problems creating economic insecurity for most people. Already 40 percent of people in the US can’t handle a $400 emergency and 60 percent could not handle a $1,000 surprise expense.

This weekend the Fed hit the panic button again, making an emergency announcement Sunday afternoon that it would be cutting interest rates to zero for the first time since the financial crisis. It also announced quantitative easing in the form of at least $700 billion of asset purchases. This will not change the course of the virus and it will not open supply lines from impacted countries or increase consumer spending. It shows that panic over the global recession is hitting very quickly.

Here are some aspects of the current financial crisis and what we can expect:

The Consumer Collapse: People in the United States are starting this recession in a weak financial situation. In December 2019, there was a record $4.19 trillion in personal debt breaking November’s record of $4.16 trillion. Student debt was already in crisis, totaling $1.6 trillion and impacting 45 million people with a delinquincy rate of more than 11 percent. Jack Rasmus reports that “only the US household consumer was holding up the US economy at year-end 2019.”

Now, the economy is in a virtual standstill. Conferences and concerts are canceled, colleges are switching to virtual classes, public schools are closing, Broadway is dark, and professional sports are on hold. Disneyland, which stayed open through the last recession, has closed. There is no precedent for the economy shutting down so quickly.

Each of these closings, combined with people staying home, is driving a collapse of the economy, which will worsen. People are losing their jobs or experiencing reduced incomes causing them to spend less.  This has a ripple effect, as the NY Times describes, “When restaurants close their doors, they no longer need tablecloths delivered by linen services or beer from local brewers. When people stop flying, they no longer need taxis to the airport or $5 bottles of water from the airport newsstand.” They report that Zip Recruiter job posting for restaurants was down 26 percent compared to a year ago, catering is down 39 percent and there’s been a 44 percent decline in aviation jobs.

The Corporate Collapse: Like people, corporations are holding record levels of debt. The corporate bond market will be shrinking and corporate credit will shut down. Already corporations are switching their credit lines to cash. This will lead to businesses being unable to refinance, which will be the prelude to mass defaults and bankruptcies. The collapse of corporations will lead to increasing unemployment, adding to the consumer collapse.

The first to be impacted will be the more than $2 trillion dollar US junk bond market, followed by the $3 trillion dollar BBB corporate debts. Rasmus explains these bonds are really also junk that has been improperly reclassified as BBB. That is $5 trillion at rapid risk for default including fossil fuel companies and retail stores, which will then spread to higher grade corporate debt.

US corporations have been propped up by the Federal Reserve as well as the Obama and Trump administrations. This has included free money from the Fed that has artificially escalated stock prices as companies used the money for stock buybacks. The bailouts of the Obama era, followed by Trump’s $4.5 trillion 10 year tax cuts created a windfall making up 23 percent of the 27 percent rise in corporate profits in 2018. The US corporate economy is very fragile.

The End Of the US Oil And Gas Boom: Last Friday, Russia and Saudi Arabia could not agree on continuing to prop-up the price of oil. An oil war began with plunging prices to gain a bigger share of the market. This led to the steepest drop in oil since prices since January 17, 1991, when Operation Desert Storm was launched. Hundreds of billions of value for the already troubled US shale oil and gas industry disappeared. Destroying US shale may have been the goal of Russia. Trump paused the drop on oil prices by ordering purchases for the strategic petroleum reserve, but that is a temporary pause.

Shale oil is at a disadvantage because Goldman Sachs projects it needs a price of $48 a barrel to repay its debts. Goldman warned that oil prices could fall as low as $20 a barrel. In contrast, Saudi Arabia’s production costs are said to be $2.80 a barrel.

The US fossil fuel market has never been financially secure with only 10 percent of companies showing a profit. It has been propped up by massive debt. DeSmog Blog reports that banks wrote off as much as $1 billion in shale loans in 2019. World Oil reported an additional $40 billion of shale debts are expected to come due in 2020, followed by over $160 billion in debts over the following three years.

The crash of the shale oil and gas industry could cause a major recession by itself. There will be many bankruptcies in shale industries and tens of thousands of layoffs over the next 12 months causing widespread collateral damage.

Trump and Obama’s policies created the expansion of the shale oil and gas but left the economy and energy security at risk of foreign nations. The fossil fuel collapse comes at a time when the cost of renewable energy has consistently lowered costs making wind and solar far more competitive than fossil fuels.

The combination of the drop in the price of oil, the tightening credit market for shale, the reduced demand for oil and gas as well as the realities of the climate crisis and reduced cost of clean energy tells investors to get out now rather than stranding their assets in a failing fossil fuel market.

The Stock Market Crash: On February 24, the World Health Organization (WHO) announced it was time to prepare for a global pandemic. The stock market plummeted. Over the following week, the Dow Jones dropped by more than 3500 points or 10%. On March 3, when the Federal Reserve tried to stop the drop by cutting the Feds fund rate from 1.5 percent to 1 percent, their first emergency cut and biggest one-time cut since the 2008 financial crisis, it fueled a panic.

On March 11, Trump gave an address to the Nation from the Oval Office in an attempt to stop the crash. It failed. Markets continued falling 1250 points again even before they reopened the next morning. On the 12th, the Dow fell 2352 points, the largest single-day stock market point crash in history. Last week saw the three worst point drops in Dow history, with Monday’s drop of 2013 points holding the record until Thursday, and Wednesday being the third-largest single-day stock market point crash in history. On a percentage basis, the Thursday collapse was the largest for the Dow since the crash of 1987.

As the market crashed, the Federal Reserve announced it would inject $1.5 trillion into short-term markets. This is twice as large as the original size of the 2008 bank bailout. WHO issued a plea for $675 million a month to fight the global coronavirus pandemic. The Fed’s Wall Street Bailout was over a thousand times larger than the emergency coronavirus funding WHO requested.

On Friday, Trump held a press conference where he surrounded himself with corporate executives to send a message to investors, the markets and big business. He declared a state of emergency that he claimed would free up $50 billion in federal dollars. Trump did not announce any new measures to stop COVID-19 or expand access to treatment but he made clear the pandemic was a profit opportunity for private industry, including testing companies, and retailers like Walmart, Target and CVS that are providing tests. Wall Street got the message and the Dow Jones Industrial Average increase 1400 points.

But this is not likely to last. First, the stock market’s expansion since the 2008 collapse has been artificially pumped up by tax and interest rate policies that led to record corporate stock buybacks, high executive pay, and high dividend payouts. This created an artificial stock market boom that is being erased by the virus and oil war.

Real Changes are needed in both the short and long term to fix an economy that has been ailing for most people for multiple decades. Next week, we will write about what can be done to fix the economy and how people are organizing in their communities now to get through the epidemic and economic crisis.