By Jimmy Kalebe in Port Moresby

Papua New Guinea police have intercepted and confiscated almost K200,000 (about NZ$90,000) in K2 and K5 notes hidden in a container on a ship which arrived at the Lae wharf in a suspected money laundering case.

The cash, packed into three boxes inside the container full of bottles of water, was sent as a consignment to a company in Wewak, East Sepik,the last major town before Indonesia’s Papuan border.

Lae Metropolitan Superintendent Chief Inspector Chris Kunyanban said local police were tipped off by their counterparts in Port Moresby where the ship had sailed from. 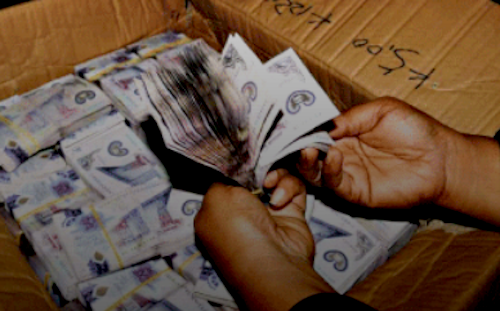 Some of the seized money. Image: PNG Post-Courier

Kunyanban said after receiving the tip-off from Port Moresby, police secured a search warrant from the district court in Lae and alerted the shipping company.

National crime investigation unit officers in Lae identified the container when the ship arrived on Friday.

“About 90 percent of the container contained water products consigned to a company in Wewak,” Kunyanban said.

He suspected that it was the work of syndicates involving locals and foreigners.

“Currently, Papua New Guinea is facing a mounting problem with different syndicates brewing which involve locals and foreigners,” he said.

He said money laundering was becoming a problem.

The cash will be kept at the Bank of Papua New Guinea in Lae.

“Police will work with the Bank of PNG to establish which law has been breached and further investigations will be carried out,” he said.

He warned businesses to be mindful of the way they run their operations.

“Especially when shifting huge amount of money from one place to another, be mindful that
shifting large amount of cash in such a manner is not advisable,” he said.