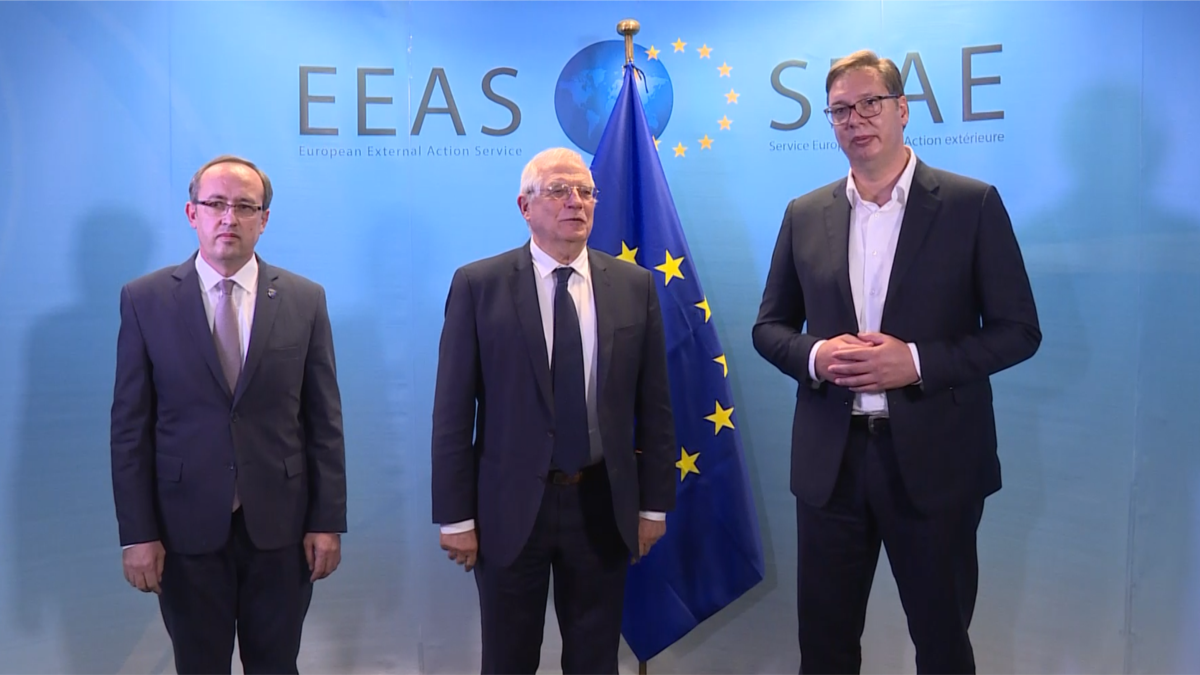 The leaders of Serbia and Kosovo have held their first face-to-face talks in 20 months under a European Union-mediated dialogue process aimed at normalizing relations between the two Balkan neighbors.

Serbian President Aleksandar Vucic and Kosovo’s Prime Minister Avdullah Hoti came away from the July 16 talks in Brussels still far apart on a host of issues but agreed to meet again in-person in early September.

Technical-level talks will continue next week among officials.

EU special envoy Miroslav Lajcak, who is mediating the talks, said the two sides focused on the issues of missing and displaced persons as well as economic cooperation.

He urged both Belgrade and Pristina to work with the International Committee of the Red Cross to resolve the issue of missing persons to foster reconciliation.

Economic cooperation “is one of the backbones of the European Union,” and will improve living standards and create jobs in Kosovo and Serbia, he said.

Hoti emerged from the meeting saying progress had been made in dialogue but that it was a difficult meeting.

“I have presented our position in this meeting and I will never move from that position,” he said.

The Serbian leader said he wanted to solve the outstanding disputes with Kosovo.

“But it is obvious that the differences are too big at the moment, concerning all important and strategic matters,” Vucic said.

“They would like to solve (everything) overnight, with an attempt to make Serbia accept everything they want.”

Earlier, EU foreign policy chief Josep Borrell, who is chairing the Brussels talks with Lajcak, called on both sides to approach dialogue “in the spirit of compromise and pragmatism and with the European future for their people in Kosovo and Serbia in their minds.”

Kosovo, a former province of Serbia, declared independence in 2008 in a move rejected by Belgrade.

EU-backed negotiations between Pristina and Belgrade broke down in November 2018 over reports of a proposed land swap and after Kosovo imposed a 100-percent tax on Serbian imports.

Both Kosovo and Serbia, which aspire to join the EU, have been facing mounting pressure from the West to reboot negotiations.

On July 10, both sides agreed to resume talks after a video summit hosted by French President Emmanuel Macron and German Chancellor Angela Merkel.

In those talks, Vucic and Hoti held firm to their positions. The Serbian president said the EU-backed process will be “meaningless” if they focus on whether Belgrade should recognize Kosovo’s independence.

Kosovo says mutual recognition between the two countries is the only way to normalize relations.

The new push at dialogue comes as war-crimes prosecutors in The Hague on July 16 ended four days of questioning Kosovar President Hashim Thaci.

The charges against him led to the postponement of a planned June 27 White House summit between Thaci and his Serbian counterpart.