A medical authority has warned that the spike in covid-19 cases in Papua New Guinea is to be expected and could reach thousands between September and December, reports The National today.

Professor Glen Mola had predicted early last month, when the number of cases of infection had been below 20, that there would be a surge.

He told The National yesterday that the ongoing increase would put a strain on PNG’s health system.

Professor Mola, a research doctor and consultant who heads the Reproductive Health and Obstetrics department of the University of Papua New Guinea’s School of Medicine and Health Services, called on all Papua New Guineans to work together to “flatten the curve”.

Meanwhile, The National has also reported that the first three Australian medical personnel have arrived to help the nation deal with the covid crisis, with more help to come if the situation worsens.

“They will consult with experts from the Health Department, the government and other stakeholders as to the country’s needs.” 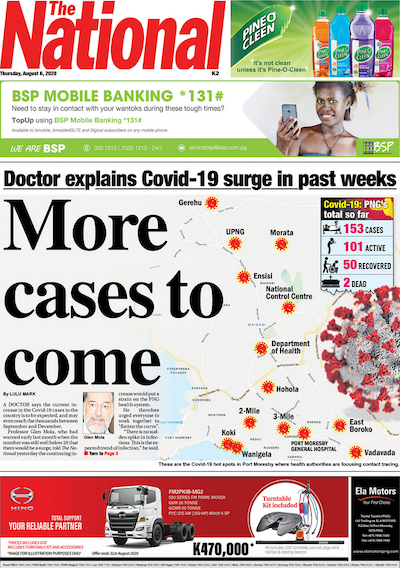 They will also assist in other areas the PNG government may need help.

“If the virus continues to spread in PNG, there is a possibility to recommend a second larger AustMat team which could arrive in a number of weeks,” Philip said.

Papua New Guinea has reported 153 cases as at yesterday, with 101 active, two deaths and 50 recovered.

“The rest include public servants, students and patients at the Port Moresby General Hospital.”

Controller Manning has also issued 11 new orders, including the closure of the Boroko market, and the closure of bottle shops on Friday and Saturday. The 14-day shutdown in Port Moresby is expected to end next week.

“There is community transmission in the National Capital District and we all have to support efforts to contain the spread of the virus in the city,” he said.

He said more testing sites had been set up in Port Moresby “to control the spread of the virus in the city”.