A scene from the Civil War, right?

The Civil War was the second enactment of this scene. The first enactment – the first emancipation – came 80 years earlier, during the War of Independence. And – this may come as a shock if you were raised on the “patriotic” version of American history – the “good guys” – the emancipators – were the British.

Many people know of later American slave revolts such as that of Nat Turner, but the massive slave rebellion during the War of Independence is often ignored. It is inconsistent with the conventional interpretation of the American rebellion against Britain as a struggle for liberty. Most Americans are unaware that slaves fought for their freedom on the side of the British.

In November 1775, Lord Dunmore, governor of Virginia, promised freedom to any slave who deserted a rebel master and joined the British Army. In 1779, the British commander-in-chief, Sir Henry Clinton, extended the offer to any slave who crossed over into British-held territory. The promise was no longer only freedom but “freedom and a farm.”

The British ruling class were not at this time opposed to slavery in principle. British merchants were active in the transatlantic slave trade and British owners of plantations in the Caribbean exploited slave labor. The emancipation was a tactic to weaken the American side in the war. Freedom was therefore offered only to slaves of rebel masters, not to slaves of masters who had remained loyal to Britain. 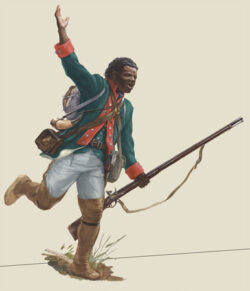 Nearly 100,000 slaves came over to the British side. They risked their lives for a chance of freedom as slave-owners vowed to execute any who were recaptured.   Several regiments were formed of the Black Loyalists. One was the so-called “Royal Ethiopian Regiment,” which put to rout an American militia at Kemp’s Landing. They wore sashes inscribed with the words Liberty to Slaves. There was also a “Black Brigade” with a celebrated guerrilla commander known as Colonel Tye. Many ex-slaves also served as blacksmiths, coopers, tailors, carpenters, cooks, and guides.

One American “lover of liberty” commented on this development in a letter:

Hell itself could not have vomited anything more black than this design of emancipating our slaves.

Decades later, in 1861, early in the Civil War, northern General John C. Fremont declared that slaves of those resisting the United States were free. That proclamation sent a shock-wave through the Union. To placate his slave-owning supporters, Abraham Lincoln swiftly acted to countermand Fremont’s order and then replaced him.

Karl Marx observed at the time that the Union should

take cognizance of slavery as a military weapon… [and] slaves should be declared free… A single Negro regiment would have a remarkable effect on Southern nerves.

It wasn’t until 1863 that Lincoln issued his Emancipation Proclamation. This was no stirring declaration of liberty but – like the earlier British proclamations — merely a tactic to undermine the secessionists. It did not offer freedom to slaves of masters who were loyal to the Union. It ‘freed’ only slaves in the Confederacy, not slaves in the other five slave states (Kentucky, Maryland, Delaware, Missouri, and Tennessee). As Lincoln’s Secretary of State, William Seward, explained:

We show our sympathy with slavery by emancipating slaves where we cannot reach them and holding them in bondage where we can set them free.

After the War of Independence

What happened to the slaves freed by the British when the War of Independence was over?

Some were left behind, recaptured, and re-enslaved. Nearly 20,000 were evacuated together with the British troops from New York and Charleston; once in England, some found employment as liveried servants, but many fell into destitution. Some found jobs on Royal Navy or merchant ships. Yet others were sent to the Caribbean, where many were re-enslaved. A large group, some 3,000 strong, were stranded in New York, still under British occupation.

The future of the ex-slaves in New York was a point on the agenda of the British-American peace talks that began in Paris in late 1782. The Americans demanded that “the British troops should carry off no negroes or other American property” – and this provision was duly written into the text of the Treaty of Paris signed early in the next year. In May 1783, however, at follow-up talks at Washington’s headquarters in Orangetown, the British commander, General Sir Guy Carleton, insisted that “his conscience as an officer” required him to respect the promise of freedom made to the ex-slaves. It was a matter of personal and national honor. He added that he was not violating the terms of the treaty, because the “negroes” had already been freed and therefore were no longer “American property.”

All slaves who escaped and fought for the British before the end of November 1782 were to be given their freedom. Their names, ages, and dates of escape were recorded in The Book of Negroes and they received certificates of freedom.

To Nova Scotia and back to West Africa

In New York, meanwhile, ex-slaves and other loyalist refugees were living in miserable conditions in a settlement of makeshift huts with roofs of sailcloth. Masters came looking for “their” slaves and tried to drag them back with them. Carleton tried to stop the raids, but clearly the ex-slaves had to be taken to a safer place. He decided to ship them to Nova Scotia in Canada – the nearest convenient territory still under British rule. There they formed the largest community of free blacks in the Americas.

Nevertheless, life in cold and rainy Nova Scotia was very hard. As a result of the machinations of their white fellow loyalists, the ex-slaves received little of the land they had been promised. Many ended up as hired laborers and share-croppers. In this respect the first emancipation resembled the second: some freedmen in the 1860s were given “forty acres and a mule” but the land was soon restored to its old owners. Freedom without right of access to the means of life is a very limited kind of freedom.

The ex-slaves did not remain in Canada. They were persuaded to participate in a resettlement scheme thought up by some British abolitionists and implemented with the help of the British government. They were to be taken to a site on the coast of West Africa, in what is now Sierra Leone. Poor blacks in England were also persuaded to go. A similar scheme on a larger scale a generation later would lead to the creation of the state of Liberia.

The resettlement scheme was poorly designed, the abolitionists being impractical eccentrics without necessary knowledge of the area. A corrupt British official stole a large part of the supplies. Many participants perished, but some did eventually establish themselves as self-sufficient farmers. The Krio (Creole) people of present-day Sierra Leone are their descendants.

The settlement was in an area where some of the ex-slaves had originally lived before being kidnapped and enslaved. And the slave trade was still going on around them! So they had to take care to avoid re-enslavement. One settler spotted her own mother in a column of slaves being marched in chains to the coast and was able to buy her release.

The historical record shows that while slaves have received help from enemies of their masters – the British authorities in the War of Independence, the North in the Civil War, the organisers of “Back to Africa” schemes – the result has fallen well short of full emancipation. The fate of the ex-slaves remained largely in others’ hands: at best, new masters had replaced the old ones. The struggle for full emancipation continues in new forms today.

As the workers’ anthem, The Internationale, says:

There are no supreme saviours, No god, no Caesar, no tribune. Workers, let us save ourselves!

Or as the great American socialist Eugene Debs put it:

I do not want you to follow me or anyone else; if you are looking for a Moses to lead you out of this capitalist wilderness, you will stay right where you are. I would not lead you into the promised land if I could, because if I led you in, someone else would lead you out.

This article was posted on Monday, August 17th, 2020 at 11:56am and is filed under Canada, Emancipation, Slavery, US Civil War, War of Independence.