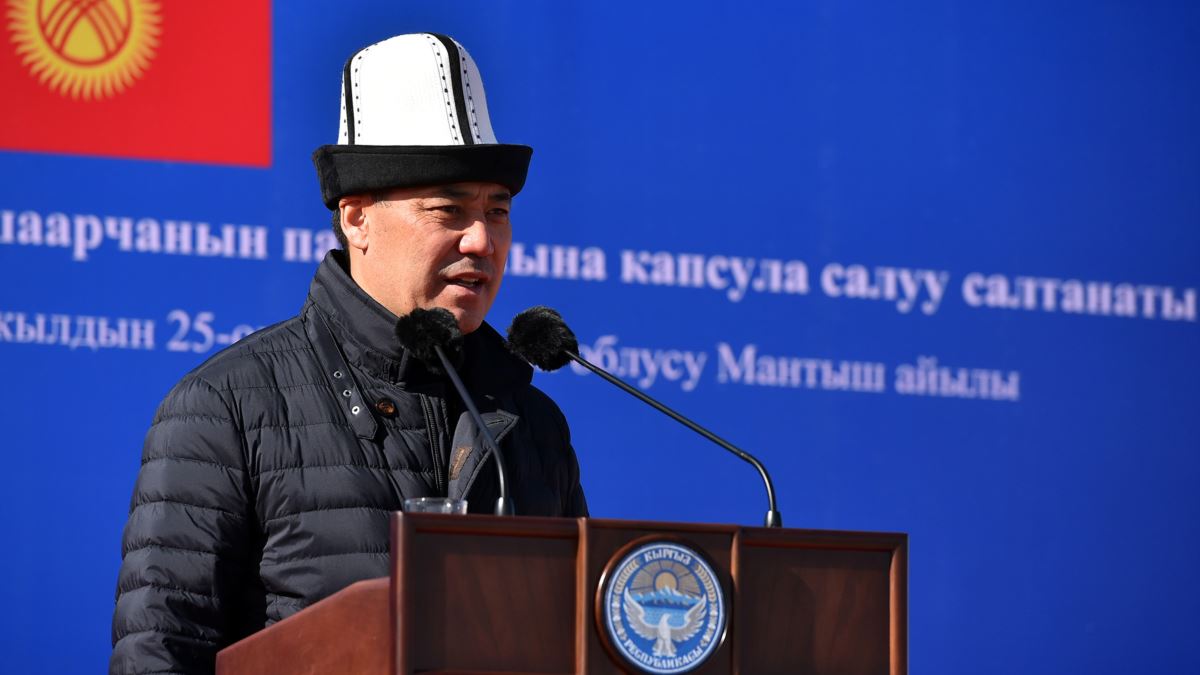 Talking to residents of the southern Osh region on November 3, Japarov rejected his critics’ statements accusing him of trying “to usurp” power from the current parliamentary system.

“All the proposals on the reforms will be openly discussed with the people. In 10-15 days, we expect to finish defining the proposals and then give them to the Constitutional Council that is to be established…. All interested citizens and representatives of nongovernmental organizations will be allowed to join the Constitutional Council, and its sessions will be aired live on television. The proposals will be offered for public discussions and the final decision on them will be made via a referendum,” Japarov said.

Japarov, a former nationalist lawmaker who was jailed on charges of kidnapping a political rival in 2017, was freed from prison in the midst of the demonstrations sparked by official results of parliamentary elections in early October.

The mass rallies ousted the government and prompted the resignation of President Sooronbai Jeenbekov.

After his release from prison, Japarov was approved by parliament as prime minister and took over the powers of the presidency when Jeenbekov vacated the post in mid-October.

He is set to serve as acting president until the January 2021 election, though he reiterated on November 3 that he will step down in December because Kyrgyzstan’s constitution forbids a person serving in an acting or interim capacity from taking part in a presidential election. Such a move would make him eligibile for the vote scheduled on January 10.

Japarov also said that new parliamentary elections will be held “after the governing system in the country is changed.”

After the results of the October 4 parliamentary elections were annulled, the Central Election Commission (BShK) decided to rerun the elections on December 20.

But, on October 22, Japarov signed parliament-approved amendments to the law on elections to delay a new vote until some time in 2021.

The BShK tried to appeal the move with the Supreme Court, but the court refused to look into it citing a technical issue concerning the payment of a fee.

The Supreme Court’s Constitutional Chamber said on November 2 that it will look into a similar appeal filed by the opposition Reforma (Reform) party and two citizens.

The leader of the opposition Ata-Meken (Fatherland) party, Omurbek Tekebaev, told RFE/RL that his party will fight for widening powers of the parliament, adding that the future of the reforms proposed by Japarov will depend on who wins the presidential poll.

Former lawmaker Iskhak Masaliev told RFE/RL that Japarov has already started his presidential campaign by visiting regions and pushing his program. According to Masaliev, Japarov has replaced many officials with his own people to secure his plan to stay in power for a longer period of time.