It has been billed as the most significant US election in generations, and with nearly 100 million votes already cast, it is well underway.

An estimated 50 million more votes are expected on the last day of in-person voting on Tuesday (Wednesday NZ time), with mail-in ballots still making their way through the postal service, including from overseas and military voters.

It is not only the White House up for grabs, but all 435 seats in the House of Representatives and 35 of the 100-seat Senate.

In addition, 11 gubernatorial (state governor) races, various state legislatures, and a plethora of local judges, sheriffs, school boards and supervisory roles are also on the ballot. A quick glance at a US ballot illustrates how America has more democratically elected positions per capita than any other country in the world.

A turbulent four years of Trump
This election will be one for the history books. The White House incumbent, impeached on abuse of power charges and litigating against Congressional oversight of potential financial conflicts of interest, has refused to commit to a peaceful transfer of power.

In the year following more than 1,000 former federal prosecutors confirming President Donald Trump would be indicted if not for the current immunity the Oval Office provides him, Trump has stepped up rhetoric that any election that he does not win is “rigged”.

Then came the “October surprise” from The New York Times that the president has at least US$400 million in personally guaranteed loans due over the next possible term and previously undisclosed Chinese bank accounts. This has brought the president’s priorities under intense scrutiny alongside a flailing economy and federal mismanagement of the covid pandemic response.

Citing these concerns, formal endorsements of Trump’s political opponent, former Vice-President Joe Biden, have come from unlikely places. Republican national security veterans, GOP governors and nonpartisan communities of scientists and physicians have endorsed Biden, some for the first time in the history of their organisations.

A group of 73 high-level former GOP US National security officials from administrations spanning Reagan to Bush Jr wrote in an open letter that Trump is “dangerously unfit to serve another term”, citing his undermining of the rule of law, failure to lead Americans through the pandemic, and damage to the US’s global reputation.

[…] thanks to his disdainful attitude and his failures, our allies no longer trust or respect us and our enemies no longer fear us.

A chorus of Trump’s own former administration officials have joined The Lincoln Project, Republican Voters against Trump, 43 for Biden (featuring members of the George W. Bush administration) and former staffers of late senator John McCain, to mount powerful testimonials targeting Trump’s base, independents and new voters.

The Biden camp has stressed a return to decency and cooperation, a United States of America. A popular ad encapsulates the message,

There is only one America. No Democratic rivers, no Republican mountains. Just this great land and all that’s possible on it with a fresh start. There is so much we can do if we choose to take on problems and not each other and choose a president who brings out our best.

Other “anyone but Trump” ads target voters who may have supported him in 2016 as a fiesty outsider, but have tired of the noise.

Ads, endorsements and of course polls are potentially useful indicators during the final week of voting. But what are some other trends that will likely impact electoral turnout and the results? Here are a few to look out for.

Millennial voter generation
Against the tight margins of the 2016 election in a handful of decisive states, a new generation of voters has emerged who may tip the balance of power. They drove a higher turnout in the 2018 midterm election and are not only voting but running and winning office. Enter the millennials.

The US is on the cusp of a generational shift. This is the first US presidential election in which the millennial generation is now the largest voting-age cohort, displacing the baby boomers who have held the title since the 1970s.

Younger millennials, who may have spent the previous presidential election in a high school walk out, or participated in the March for Our Lives for gun safety, are now eligible to vote.

Older millennials, who are approaching 40, grew up with high school shootings and are now watching their own young children do lockdown drills, rewarded with a candy if they remain quietly hidden in the toilet with their feet up to avoid detection.

Amid concern about growing economic inequality, the millennials will likely be the first generation to be less financially secure than their parents, and the most likely to compare themselves with international OECD peers who enjoy universal healthcare, gun control and better financial support during the pandemic.

None of these issues is well represented by the current administration, and so Trump’s approval rating hovers around 28 percent among that age group.

Trump has called climate change a Chinese conspiracy to undermine American manufacturing, pulled the US out of the Paris Agreement, and is suing to eliminate the Affordable Care Act (“Obamacare”).

On these crucial issues, different informational diets between generations, political parties, and even families could drive very different voting patterns.

But the millennial vote could be decisive.

Young people will have a big say in the outcome of the 2020 election. Image: Josh Edelson/AAP/EPA

Disinformation – word of the year?
If “post-truth” was the Oxford Dictionary’s Word of the Year in 2016, “disinformation” is in the running for 2020.

Disinformation – the deliberate spreading of false or misleading information in order to deceive – is a growing problem in democratic elections. It was a key theme in the Republican-chaired Senate Intelligence Committee report into Russian interference in the 2016 election.

These reports documented key disinformation techniques, narratives and purpose. Akin to Russian “active measures”, disinformation is used to undermine authoritative sources of information by blurring the line between fact and faction.

The most popular narrative, according to this report, was the myth of “voter fraud”.

While the 2016 disinformation campaign centred on voter fraud, the 2020 version targets mail-in voting. These ballots, cast in the middle of covid-19, are at the heart of competing narratives about the pandemic itself.

In this election, there has been a catalogue of disinformation about covid-19. While scientists, physicians and public health authorities have repeatedly warned the public and officials to take action to protect public health, the Trump administration has generally downplayed its severity.

Calling it “just the flu”, Trump said the problem impacts “virtually nobody”, even after nearly a quarter of a million Americans died. Recent research has shown Trump himself is one of the largest superspreaders of

Some of that disinformation will affect how people cast their ballot. While 19 states have expanded mail-in ballot options as a result of the pandemic, others have made voting harder by closing voting places while not expanding alternate options.

Texas, for instance, refused to recognise covid-19 concerns as a valid reason for those under 65 to request a mail-in ballot, with South Carolina only recently reversing a similar restriction.

Disinformation about mail-in ballots is likely to feature in court challenges. Trump has insisted the results be known on election day, which would necessarily exclude mail-in ballots postmarked in time but not yet received through the mail, including those cast by overseas military voters.

He has repeatedly signalled that his appointees in the judicial system (which number in the hundreds) will help secure his win.

While it is unprecedented for a president to attack electoral integrity, state level actions are also important to consider.

Elections run at state, county level
Voting in the US is not easy to summarise. Devoid of democracy sausages and a non-partisan federal elections commission, elections are run at the state and county level, from voter rolls to polling locations and everything in between.

Each state is in charge of its own election, and there are nearly as many systems as there are states.

Other state variations include the option of early in-person voting, whether voting places are open on a Sunday, how far in advance you must register to vote, and requirements for voter ID. 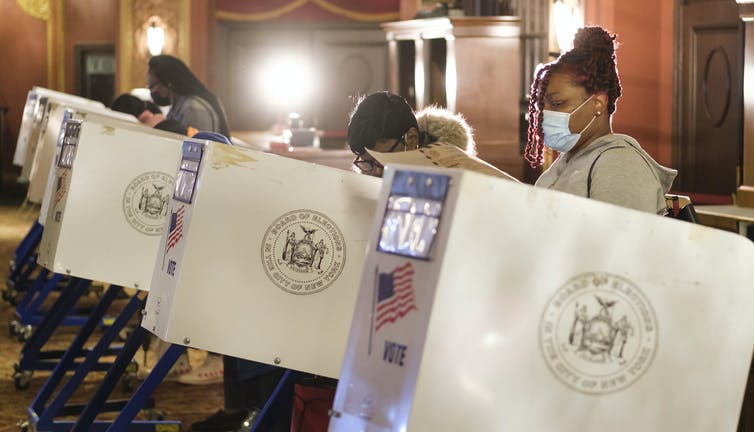 Each US state has its own voting requirements, arrangements and ballots. Image: Juston Lane/AA/EPA

Each state’s ballots look different, with users selecting their choices via handmarked bubble sheets, hole punches or hanging chads, the latter made famous in the 2000 recount in Florida that delivered George W. Bush his first term.

One of the quirks of the US voting system is the electoral college. The college is essentially a distribution of electoral votes among the states according to population size, updated after every 10-year census.

In 2020, several large states are in the spotlight as toss-ups, including Texas, which carries a prize of 38 electoral votes in the race to 270. It will be one to watch on election day, with early voter turnout already surpassing its 2016 total.

Texas is also the site of one of the most blatant attempts at disenfranchisement, with the GOP failing in its attempt to stop more than 120,000 ballots already cast in one of its largest counties.

Until recently, states were not allowed to make changes to voting procedures without judicial oversight. Plans to close significant numbers of polling places in certain districts, for instance, had to go through pre-clearance processes.

However, these protections were dismantled by a US Supreme Court ruling in 2013. This year’s presidential election will be only the second without those protections, and voter disenfranchisement could result.

One key method of disenfranchisement could be mail-in ballots. In an interview in August, Trump said he planned to block funding for the US postal service to prevent increased voting by mail.

A Trump appointee to the head of the postal service in July recently oversaw the destruction and dismantling of 700 mail processing machines, leading to more delays.

Simple polls of voting intention do not capture voter disenfranchisement and intimidation.

In New Mexico, the GOP sent mailers that read:

When the Democrats win the White House and you didn’t do your part to stop it, your neighbours will know. Voting is a matter of public record.

Experts warn of potential violence and rioting after the result. Growing polarisation, extremist groups such as QAnon threatening the use of force, and the availability of tactical weapons are all warning signs.

This year has seen more than 8 million more gun purchases than 2019, and scholars warn of increasing militia activity. Trump has publicly praised supporters who commit violence, including the Kenosha shooter.

International allies are also concerned. After Trump used armed guards to teargas peaceful protesters in Washington DC (which Australia watched live as its reporters were bashed on air), the Scottish Parliament voted to suspend exports of riot shields, tear gas and rubber bullets to the United States.

Australia recently updated its “do not travel” advisory to the US, citing civil unrest around the election.

Regardless of the outcome of the election, some of the trends may continue beyond Inauguration Day on January 21, 2021, affecting not just the US but its relationships with allies and adversaries alike.

Australia would do well to watch carefully and wait for the final results.

Dr Jennifer S. Hunt is a lecturer at the National Security College, Australian National University. This article is republished from The Conversation under a Creative Commons licence. Read the original article.