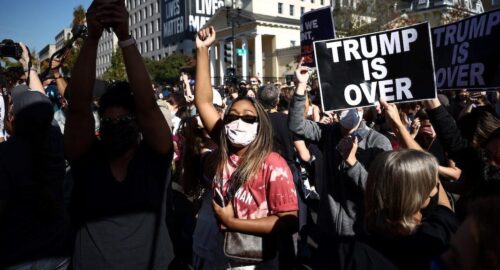 Change doesn’t come from the top, especially within a manipulated ‘democracy’ as exists in the United States. When social transformation occurs, it follows years of educating, organizing and mobilizing at the grassroots. Elected leaders who represent that transformation ride on a wave created by social movements, not the other way around.

As many people around the country and the world celebrate the media’s announcement of the defeat of President Trump, those who advocate for transformational changes in the political, economic, legal and social systems are talking and writing about the challenges we’ll face under a Biden/Harris administration.

Democracy, literally ‘people power,’ is feared by the wealthy elites. Whether they are represented by Democrats or Republicans, they work to suppress it. Social movements can expect to face significant hurdles under a Biden administration in the next four years. However, if we know what to expect, we can use tactics to get past them and have some victories.

If conditions don’t improve, then there will be greater polarization and conflict within the country. This will give the state more justification for repression. If we succeed, and win victories for the poor and working class while building democracy at the grassroots level, we will be on a path towards the transformation we seek. 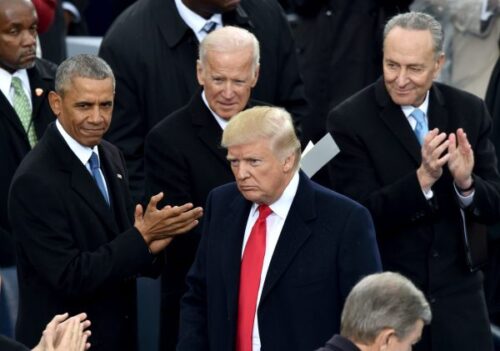 Red or blue team, they both play for the power elites (Paul J. Richards/ AFP/Getty Images)

Reflections on where we are

When the media called the election on Saturday, there were celebrations by Biden-supporters in the streets. People popped champagne corks and honked their horns. Some people see the election of Biden/Harris as a huge victory and hope it will mean changes that impact their lives positively.

Glenn Greenwald brings things back into perspective in his article comparing the Trump administration to the past two presidencies. Even though Trump was portrayed, especially by liberals, as some sort of monster, Greenwald writes:

There is nothing done by the Trump administration that can be rationally characterized as a radical aberration, some dramatic break, from U.S. tradition. Quite the contrary: none of Trump’s actions and policies are in some new universe of savagery, lawlessness, or radicalism when compared to those who preceded him in power.

Although Trump was very open about it, neoliberalism, militarism, racism and imperialism will continue under a Biden presidency. Biden did not even feign progressivism during the campaign. As Caitlin Johnstone points out in “US Murder Machine Now under Competent Management,” “Trump ran on a platform of scaling back US interventionism, as did Obama, as did even Bush, but Biden did the opposite. He is beginning from a much more hawkish position than he [sic] predecessors right off the bat.” The big question is whether or not Biden will be as competent as Obama was at getting away with it.

During the Obama administration, the peace movement struggled to survive even while Obama militarized Africa, surrounded China, destroyed Libya, increased drone attacks and more. Note that these are countries with majority non-white populations. People were reluctant to criticize the first black president and funding for the peace movement disappeared.

Jonathan Cook explains the difference between Democratic and Republican administrations. While neither party takes action to address the many crises we face and the wealth divide continues to grow, people rightly become angry at the impacts this has on their lives. Republicans use this anger to mobilize their base. Democrats work to suppress that anger and put their base to sleep. 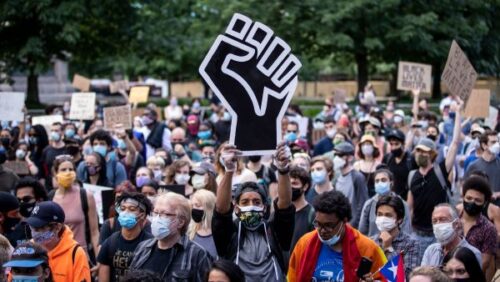 There are a variety of tactics used to weaken social movements and throw them off track. To recognize them, it helps to understand the concept of pillars of power – the institutions and groups that support the power structure. Chris Hedges outlines a number of them in his latest article, American Requiem:

There were many actors that killed America’s open society. The corporate oligarchs who bought the electoral process, the courts and the media, and whose lobbyists write the legislation to impoverish us and allow them to accumulate obscene amounts of wealth and unchecked power. The militarists and war industry that drained the national treasury to mount futile and endless wars that have squandered some $7 trillion and turned us into an international pariah. The CEOs, raking in bonuses and compensation packages in the tens of millions of dollars, that shipped jobs overseas and left our cities in ruins and our workers in misery and despair without a sustainable income or hope for the future. The fossil fuel industry that made war on science and chose profits over the looming extinction of the human species. The press that turned news into mindless entertainment and partisan cheerleading. The intellectuals who retreated into the universities to preach the moral absolutism of identity politics and multiculturalism while turning their backs on the economic warfare being waged on the working class and the unrelenting assault on civil liberties. And, of course, the feckless and hypocritical liberal class that does nothing but talk, talk, talk.

Each of these – the lobbyists, courts, military, CEOs, media, academics and liberals – is a pillar that supports the ruling class. There are others such as police, non-profits, churches, workers and youth. Social movements need to understand how these pillars operate and what can be done to weaken them by causing divisions within them and drawing people within those institutions to the movement’s side. This is discussed in more depth in the first class of the Popular Resistance School.

The media is a critical pillar for the power holders. It is used to control the narrative by keeping debate (“both sides”) squarely within the limits deemed acceptable by the elites. Voices that offer ideas outside that narrow framework are kept out. The media also uses distraction to take attention off the crises we face and the failures to address them.

As access to information has become more democratized through social media, internet news websites and podcasts, Big Tech, with the support of liberals and Democrats, has started clamping down and censoring content. Websites were first suppressed through manipulation of algorithms that kept them out of search tools and social media feeds. Then platforms such as YouTube cancelled monetization of certain content, which was necessary so those outlets could exist. Now, social media corporations such as Facebook and Twitter are disabling accounts, and recently the Department of Justice took 27 websites down. Of course, the prosecution of Julian Assange and others under the Espionage Act is another tactic meant to prevent journalists and publishers from revealing truths.

Social movements need to defend those like Assange who challenge the power structure. We must also push back against these attacks on our press freedom and demand our right to know what is being done by the government and corporations.

Other tactics used to throw movements off track are making excuses for why what the movement is demanding is too much or why now is not the time to make those demands. If that doesn’t work, power holders will use delay tactics such as pretending to work on the issue. This could include creating a committee to look into the issue or commissioning a study.

A common tactic is to present a false solution – something that sounds like it is going to solve the crisis but that falls short and preserves the status quo. The Affordable Care Act was a false solution used to undermine the demand for national improved Medicare for all and enrich the medical industrial complex.

Non-profit organizations and other pillars such as unions and community groups play an important role in promoting false solutions. This happens when the groups are closely allied with a political party or rely on access to power holders or money that causes them to compromise. These forms of co-optation, a widely used tactic, are described in depth in class six.

Another tactic is to create demons such as “socialism” that are used to frighten people away from supporting solutions. Hand in hand with creating demons is to vilify and marginalize those who are effectively challenging the power structure.

And if none of these tactics work and people persist in making their demands and building their campaigns, then the power holders use repression through the police and courts. One could also argue that maintaining economic insecurity through low wages, expensive housing and health care are also tools of oppression meant to keep people under control and focused on their basic survival and not on the work of organizing.

The ways we overcome these obstacles are by being aware of these tactics and countering them. We should not allow excuses or false solutions to weaken our demands for what we require. We need to recognize false demons and find ways to reassure people they will be better off with the changes we are championing. We need to show solidarity when members of the movement are under attack. And we need to build networks of support for each other, whether it is mutual aid or self defense.

We need to continue building power from the bottom up through organizing, political education and community assemblies where people can meet to discuss the crises and concrete ways to solve them. Then we can mobilize in our communities to build structures that empower us by meeting our needs and that model the society we envision. Social movements have always been the engine that drives transformational changes.

The coming years will be a challenge for social movements to remain independent, clear and uncompromising (ICU) in our demands. It is possible. Through the years, social movements in the United States have been growing and maturing. From the massive actions against unfair trade to the Occupy Movement to movements for worker and immigrant rights, housing, education, health care and more, people are learning how social transformation occurs. Our task now is to keep that going and growing while the power holders work to convince people that their problems are solved with the election of a Democrat.