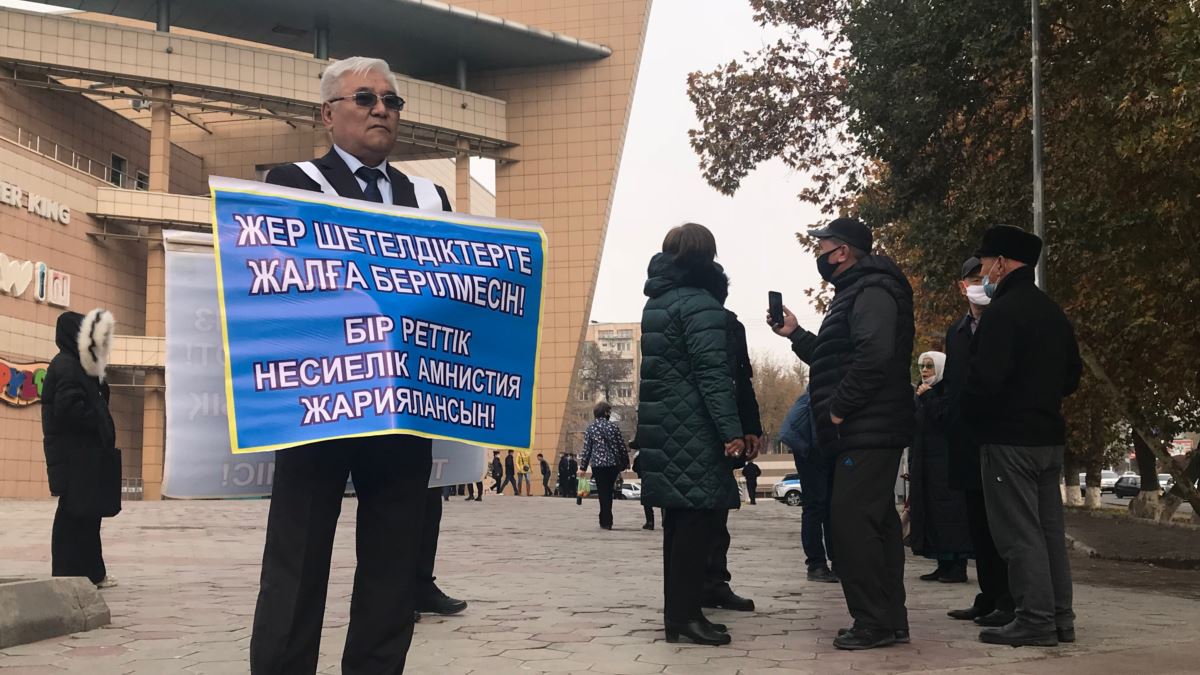 SHYMKENT, Kazakhstan — An activist in Kazakhstan’s southern city of Shymkent has held a single-person picket to demand the registration of the opposition Democratic Party ahead of parliamentary elections scheduled for January 10, 2021.

Wearing posters on his chest and on his back with slogans put forward by the Democratic Party and demands for it to be registered, Zhambyl Zhunisbekov picketed in the center of Shymkent on November 11 accompanied by about a dozen of his supporters, who did not take part in the picket.

Single-person pickets do not require authorities’ permission, but Zhunisbekov obtained an official permit as very often police in Shymkent detain activists holding such types of protest despite the law.

Police were present at the site, but did not interfere.

“The parliamentary elections on January 10, 2021, are again going to be a mockery of an election. What we need now is political reform, the Democratic Party must be registered,” Zhunisbekov said.

Last week, Democratic Party leader Zhanbolat Mamai told RFE/RL that he had obtained permission to organize a rally in Kazakhstan’s largest city, Almaty, on November 14, to demand the party’s registration.

The Central Election Commission said on November 5 that six officially registered parties will take part in the January 10 elections. The parties include the ruling Nur Otan, four pro-government parties — Aq Zhol, Auyl, Birlik, and the Communist People’s Party — and the All-National Social Democratic Party, which describes itself as an opposition group.

Democratic Party activists insist that there are no real independent or opposition parties among the registered political groups in the oil-rich Central Asian nation.

The January 10 polls will be the first parliamentary elections since President Qasym-Zhomart Toqaev succeeded Nursultan Nazarbaev, who resigned in March last year after nearly three decades in power.

Nazarbaev still maintains key positions of power, including being head of the country’s powerful Security Council and the ruling Nur Otan party. He also enjoys almost limitless powers and immunity as “elbasy” — leader of the nation.

The 107-seat Mazhlis is currently dominated by Nazarbaev’s Nur Otan, which has 84 deputies.

The Communist People’s Party of Kazakhstan and the Aq Zhol party each have seven seats.

The remaining nine seats are appointed by the Assembly of the People of Kazakhstan, an advisory body controlled by Nazarbaev.

The last parliamentary elections were held in March 2016.

International election observers say that past elections in Kazakhstan have been neither free nor fair, citing electoral fraud, repression of opposition candidates, and restrictions on the freedom of the press.