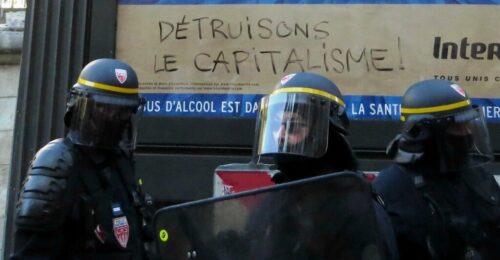 News Junkie Post has a policy of zero tolerance for conspiracy theories. With a story as big and global as the COVID-19 pandemic, alternative narratives from conspiracy theorists were bound to happen. Like most news outlets, big or small, News Junkie Post‘s main focus in 2020 was the pandemic. Our Co-Editor-in-Chief, Haitian born microbiologist Dr. Dady Chery, superbly focused on and explained the science; our Indian Editor Imtiaz Akhtar gave us a heart felt testimony from Calcutta under lockdown. For my part, I handled the sociological, political and economical implications of a grossly mismanaged global crisis. As opposed to many, we covered the pandemic in a clinical and analytical way, without falling into the macabre body counts or the assumption that vaccines would be perfect silver bullets. We tried, with humility, to keep our eyes on the unpredictable shifts of a constantly moving target. 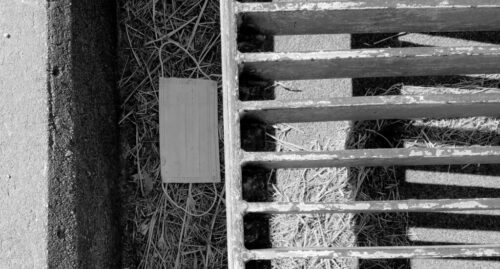 In the Trump era, soon to fade away in our rear view mirror, catering to border line conspiracy theory narratives has become rampant. This phenomenon has deeply impacted people’s perception of reality, not only in the United States, but worldwide. Dismissal of information, valid or not, as fake news is commonplace. This notion has become so insidious that it has even entered, ad verbatim in English, France’s news outlets lexicons. Needless to say, and in accordance with Orwell newspeak, depending on the location or ideological orientation, the fake news for some are the real news for others.

In our Orwellian kaleidoscope, figments of the imagination’s fictional mirages claim to be anchored in reality. In brief, the soon to be defunct Trump era has taught us that reality is a lot stranger than fiction; that propagandists of all stripes can be duly amplified to the dubious status of global influencers; and the scattered thought processes they promote through social media are a lot more contagious that the nastiest Influenza. 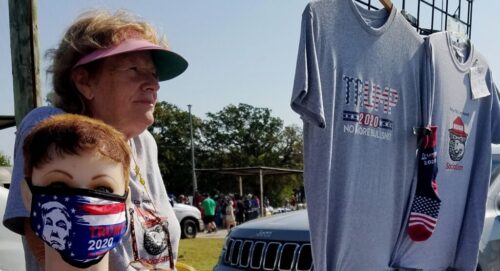 In the surreal context of the US election aftermath circus, the startup network NewsMax has become Trumpism’s Newspeak vehicle of choice: a Trump propaganda echo chamber where Trump’s die hard supporters, independently of any rationality or moral decency, are told exactly what they want to hear, and therefore are given talking points and ammunition to fuel their simmering anger even more. Needless to say, this crescendo in the realm of the imaginary from their leader, where the elections were rigged and stolen, put into jeopardy the legitimacy of the entire US electoral process. It will be extremely tricky to ensure that the baseless grievances of Trump-hypnotized followers do, in time, heal rather than become festering maggot-infested open social wounds. In a time when the dark forces of the imaginary tromp rationality, the upcoming Biden-Harris administration faces this as its hardest challenge. 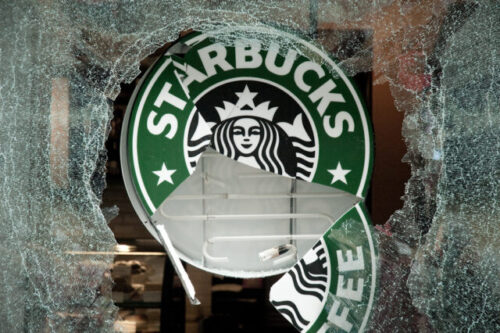 Conspiracy theories such as “the 2020 elections were stolen from Trump by the US Deep State in cahoots with a globalist elite cabal” are a paranoid version of a narrative that contains factual elements. Like any mythology, religion, of course, included, some of the far-fetched assumptions are anchored in the cultural reality of a group’s collective psyche. For example, the toxic notions of purity of blood and Aryan master race were the foundations of the Nazi dogma. In the religious realm, the same can be said of the concept of being the chosen people, invented by the Jewish faith. In both cases, we are dealing with mythologies based on exclusion: the racist and elitist notion that a specific group of humans are above all others, as if humanity has an explicit pecking order, not based on personal merit but linked to almost tribal origins. 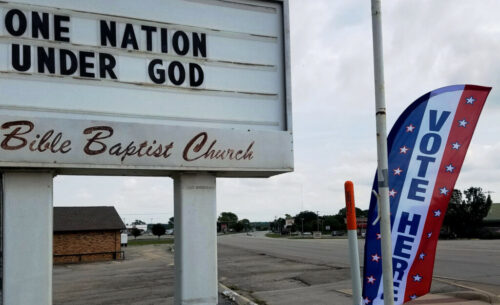 In most conspiracy theories, the imaginary is perceived, almost through some sort of epiphany, as a hard unquestionable truth. Once rationality has ceased to be sociologically and psychologically relevant to enough members of a group, then propaganda, disinformation or religious fundamentalism can convince them that magical thinking is reality. Therefore, the Earth can be flat, a circle can be square, and the love of Jesus can be the best shield against COVID-19. Deep in the QAnon paranoia, a Chinese plague was created by the globalist elite, which is composed of blood sucking elderly pedophiles who might secretly be communists, to depopulate the planet, enslave everyone, and last but not least, make sure the proud patriot crusader against this new world order, Donald Trump, loses his reelection bid. 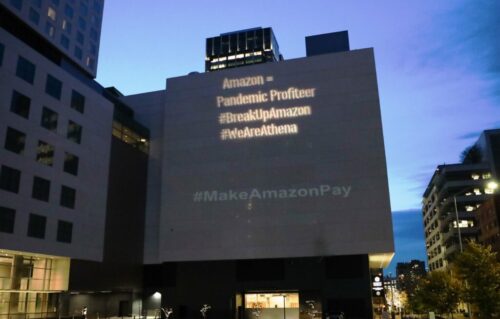 A Trumpism myth, which curiously has some international appeal, is that Donald Trump was the champion of sovereign nations fighting against an evil globalist world order. But, as matter of fact, this is completely fabricated, as Trump is, and always was, entirely at the service of global corporate imperialism. Donald Trump attempted to run the United States not as a nationalist, like he claimed in his empty slogans with US citizens’ interests in mind, but as the CEO of America Empire Inc., a subdivision of capitalism global empire. Trumpism, and other brands of populism/neo-fascism are, in essence, disingenuous as they mislead their supporters into believing they are anti-globalist. How could they be when such politicians are, in reality, the obedient servants of mega-corporate interests? 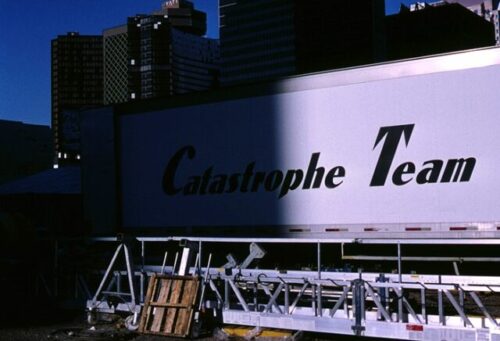 Capitalism, either using the bogus cover of populism or the pseudo humanitarian narrative of neoliberalism of someone like President Macron in France, always operates the same way. The beast is ruthless and has no mercy for the people it exploits, breaks and ultimately destroys. Capitalism‘s gargantuan appetite feeds on people’s miseries. For its engine to stay lubricated and fueled, it needs a colossal amount of human sacrifices. The COVID-19 crisis is no exception. If wars always end up translating into a financial boom, the same can be said about natural disasters like a nice little global pandemic. When you are morally depraved enough to put profit over people, your mindset is always: how could I and my investors make huge benefits from this crisis? 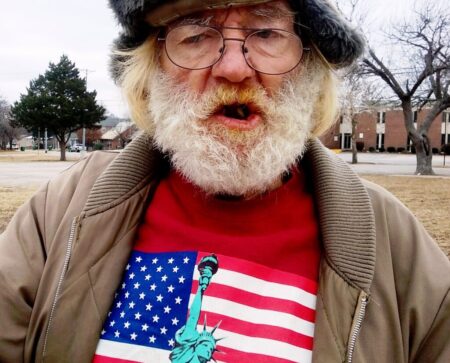 For COVID, the financial bonanza that has driven world wide stock markets to record highs, while the real economy experiences a depression, has the following factors. Firstly, huge injections of cash were made using a mechanism known as quantitative easing, a euphemism for printing money. This practice, to mitigate an initial crash of the markets, was applied world wide, but considerably more in the US and the EU. Secondly, because of various lockdown measures established in almost all countries since March 2020, there has been a huge boost for online one-stop shopping providers such as Amazon, as well as corporations such as Zoom that facilitate teleconference work. Thirdly, and this is the most important one as it is becoming Wall Street’s Holy Grail, we have, of course, the vaccines!

Who knows if the vaccine candidates in question will be efficient or have any side effects, but Wall Street and all the financial markets could care less. Moderna might not be a pandemic panacea, but one thing is obvious: it is the new El Dorado! How can you possibly go wrong with a stock that traded at around $20 in January and now trades at more than $130! Now, this is the shot in the arm that global capitalism has longed for. While millions starve, the vaccine boon is a great Christmas bonus for Wall Street! 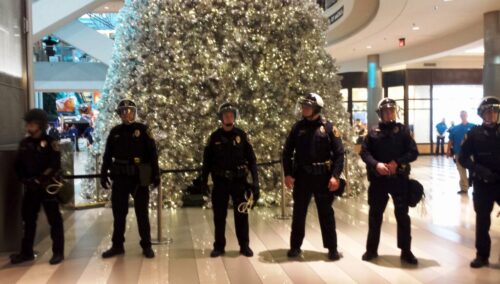 While capitalist junkies are getting their fix, and the likes of Amazon CEO, Jeff Bezos are becoming trillionaires, millions of ordinary people have died and are dying, millions more have lost their jobs, millions of small businesses worldwide are in dire straights. Countless people all over the world, included in the rich nations, rely on food banks to eat. The obscenity of it all is in our faces, defiantly staring at us. In brief, the COVID-19 crisis has been used by global capitalism and its political surrogates as a giant wealth-concentration machine. One of the stupid empty slogans of the pandemic was “We’re all in this together.” With the unbearable mismanagement of COVID from the get go, what an insult to people’s basic intelligence. No. There is no “together” at all in all this, but just a dog-eat-dog social construct. 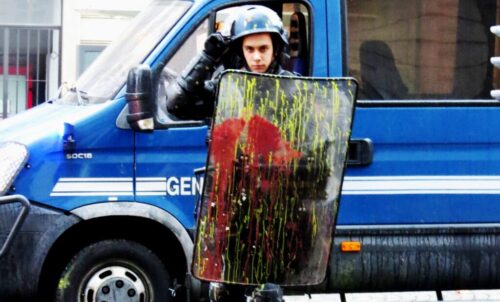 As more people are becoming aware, at least intuitively, that their governments have failed them or are trying to impose on them drastic measures such as lock-downs, curfews and other arbitrary behavioral rules that have varied throughout the pandemic, a general sense of fear, a collective depression triggered by anxiety and isolation seems to be turning into anger for many. Fear and anger are powerful primal emotions. Unlike fear, which paralyzes, properly channeled anger can be a positive force. Especially collective anger towards incompetent governments that are either not making decisions at all, like Trump did in the US, or are dictating authoritarian measures, like Macron in France, which seem to be based on medical science, but are, in fact, a form of political navigation in a stormy sea, without a compass.

To add insult to injury, Macron thought it was a good idea to give a little more muscle to his repressive tool kit by passing an extremely police friendly law in France called Loi de Securite Globale. Fortunately, dissent and protest in France are not dead yet, and 10 days after the infamous police-state friendly law was passed, 500,000 people took to the streets despite the pandemic rules curtailing freedom of movements and assembly. 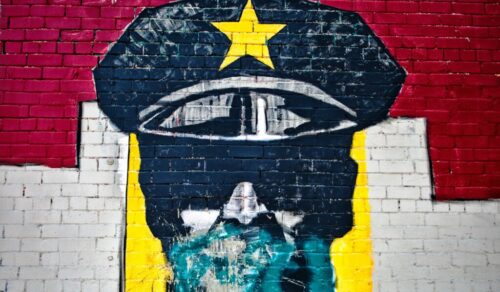 The COVID-19 crisis will give many governments an opportunity to push some authoritarian policing strategies. After about 20 years under the cover of supposed terrorist threats, the police have become meaner and more omnipresent in most countries’ social landscapes. As most countries ruling classes largely use their police forces as a tool of repression against their own citizens, police brutalities have blossomed almost universally. In fact, the Robocops of global corporate imperialism wear pretty much the same gear and adopt the same brutal techniques. Police forces are in the advance process to become the Praetorian Guard of the global capitalist empire and its billionaire ruling class as well as political surrogates.

This must be stopped at any cost, the Loi de Securite Globale is a prime example. If the world citizenry do not forcefully and diligently oppose it, hybrid police states could be maintained in place for the much bigger challenges humanity will face once the climate crisis builds its unstoppable momentum. Only a global movement can tackle the enormity of the task at hand, collectively make a stand “by any means necessary,” to quote Malcom X, and get from governments drastic systemic changes, to avoid humanity’s looming collapse. 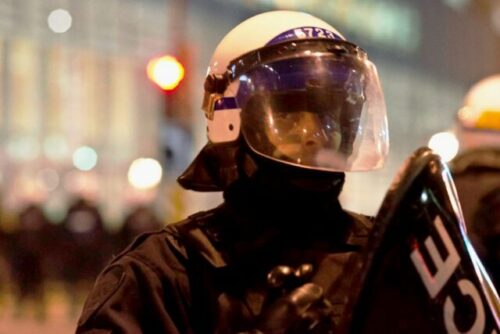