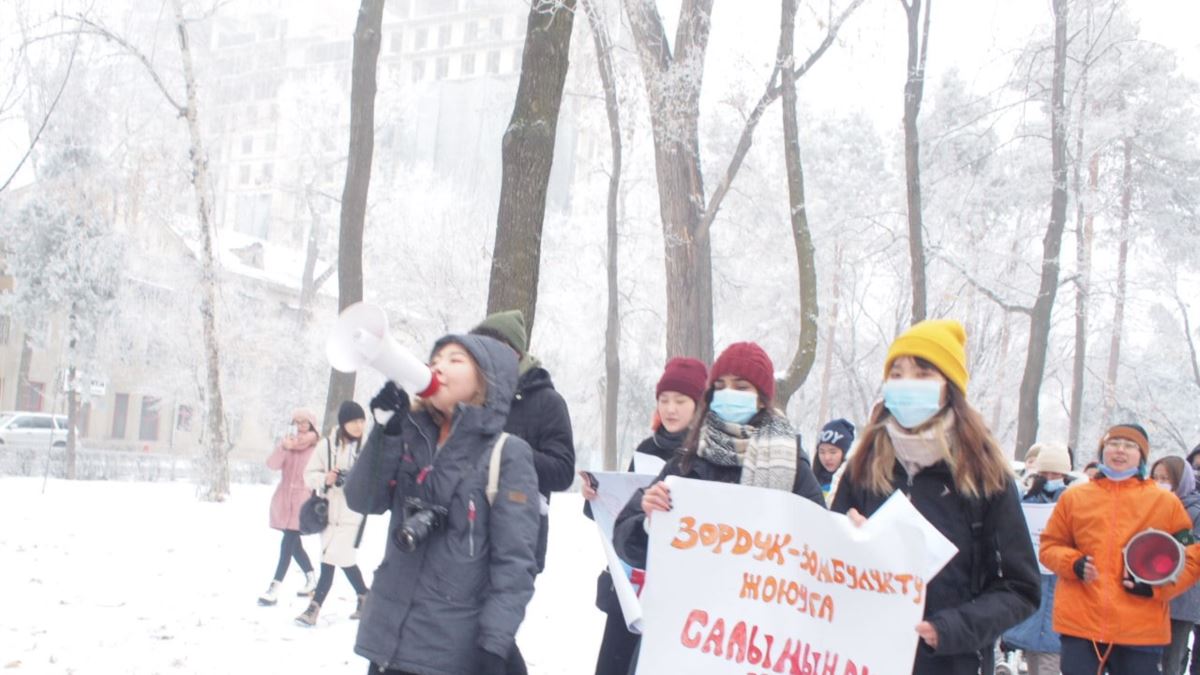 Kyrgyz are aghast at rampant gender-based violence and impunity in the courts, illustrated by the recent acquittal of men accused in the repeated rape of a 13-year-old schoolgirl.

On December 12, a march was held in Kyrgyzstan’s capital, Bishkek, as part of an annual 16-day UN campaign against gender-based violence around the world.

The march, held in subfreezing temperatures, came a day after a court acquitted two of three suspects in the rape of a 13-year-old schoolgirl in the Issyk-Kul region.

One of the suspects received a light sentence of 7 1/2 years from the judge, who fell asleep several times during the trial.

The girl, who had to have an abortion after becoming pregnant from one of the rapists, remains in a psychological trauma center.

According to her family, the three men raped her for six months, filmed her, and threatened that they would show the videos to her classmates.

“I never even thought that my daughter’s life would turn out so that her future would simply be trampled upon,” the girl’s father told Current Time, the Russian-language network led by RFE/RL in cooperation with VOA. “It turns out that there is no justice. My daughter says she wants to die.”

Violence against women is rampant in Kyrgyzstan. Kloop, an independent Kyrgyz news site, cited a study showing a quarter of women suffer from domestic violence. An astonishing 83 percent of women have experienced psychological, physical, or sexual violence in the family at least once, according to one study.

One survey showed that one in three women in Kyrgyzstan believes that there are justified reasons for a husband to beat his wife, such as for leaving the house without his permission, burning food, refusing sexual acts, or not doing household chores.

In a report released on December 10, the American Bar Association said that Kyrgyzstan’s legal system fails to protect women and instead actively impedes their access to justice.

“Women in Kyrgyzstan who survive gender-based violence face barriers to accessing justice and are often denied justice entirely,” the association of lawyers and legal professionals said.

“This is evidenced by the rarity of investigation and prosecution of domestic violence complaints, the shaming of survivors who speak out, and the many obstacles that survivors face in the judicial system.”

With reporting by Current Time and Kloop.