This story was originally published by High Country News and the Desert Sun is reproduced here as part of the Climate Desk collaboration.

Red flags flutter outside the schools in Salton City, California, when the air quality is dangerous. Dust billows across the desert, blanketing playgrounds and baseball diamonds, the swirling grit canceling recess and forcing students indoors. Visibility is so poor you can’t see down the block. Those days worry Miriam Juarez the most.

Juarez, a mother of three and active volunteer at the schools, often received calls to pick up her 7-year-old son, Lihan, when sudden nosebleeds soiled his outfits. But she couldn’t leave her job, harvesting vegetables in the fields that form square oases in the Coachella Valley. So she began packing fresh clothes for him every day, before COVID-19 halted in-person learning. “It’s OK. Just go to the office,” she’d say. “The ladies will help you change.”

The doctor’s diagnosis was unclear: Perhaps Lihan had allergies. Then, Juarez’s 17-year-old daughter began suffering headaches and respiratory issues. Finally, Juarez got a runny nose and sore throat that lasted for days when the dust blew.

It’s also toxic — a looming environmental and public health disaster. The Salton Sea’s shoreline is receding, exposing a dusty lakebed known as the “playa.” This sandy substance holds a century’s worth of agricultural runoff, including DDT, ammonia, possibly carcinogenic herbicides like trifluralin and other chemicals. Its windborne dust travels across Southern California and into Arizona, but nearby communities — many of them populated by Latino farmworkers — bear the heaviest burden.

The problem isn’t new. Yet California, though largely responsible for fixing it, has barely touched the more than 25 square miles of exposed playa. It’s been almost two decades since an agreement was signed in 2003, committing the Imperial Irrigation District, the Colorado River’s largest user, to conserve water that once flowed from farms into the lake and send it to other districts. Knowing the lake would recede, the state committed to mitigating the health and environmental impacts. The state and federal governments have spent about $70 million so far, largely on salaries and studies. Meanwhile, the high-water mark has fallen nearly 10 feet, and salinity continues to rise.

The politicians admit they’re years behind schedule, but they’re adamant that the course has been corrected, the money is being put to good use and the future is bright. Currently, 16 state employees are planning projects to tamp down dust or rebuild wetlands, and that will grow to 26 once new positions approved in the latest budget are filled. They’ve also nearly finished permitting projects that will cover 30,000 acres, a little more than a third of the area that could eventually be exposed.

Assembly Member Eduardo Garcia, a Democrat from Coachella, who represents the region surrounding the lake, is optimistic. “I believe 2021 will be a new story of the state of California living up to its responsibility and liability in terms of investing in what it signed up for at the Salton Sea,” he said.

Still, the state must overcome funding issues, disagreements with the feds, permitting bottlenecks, and decades of inertia. 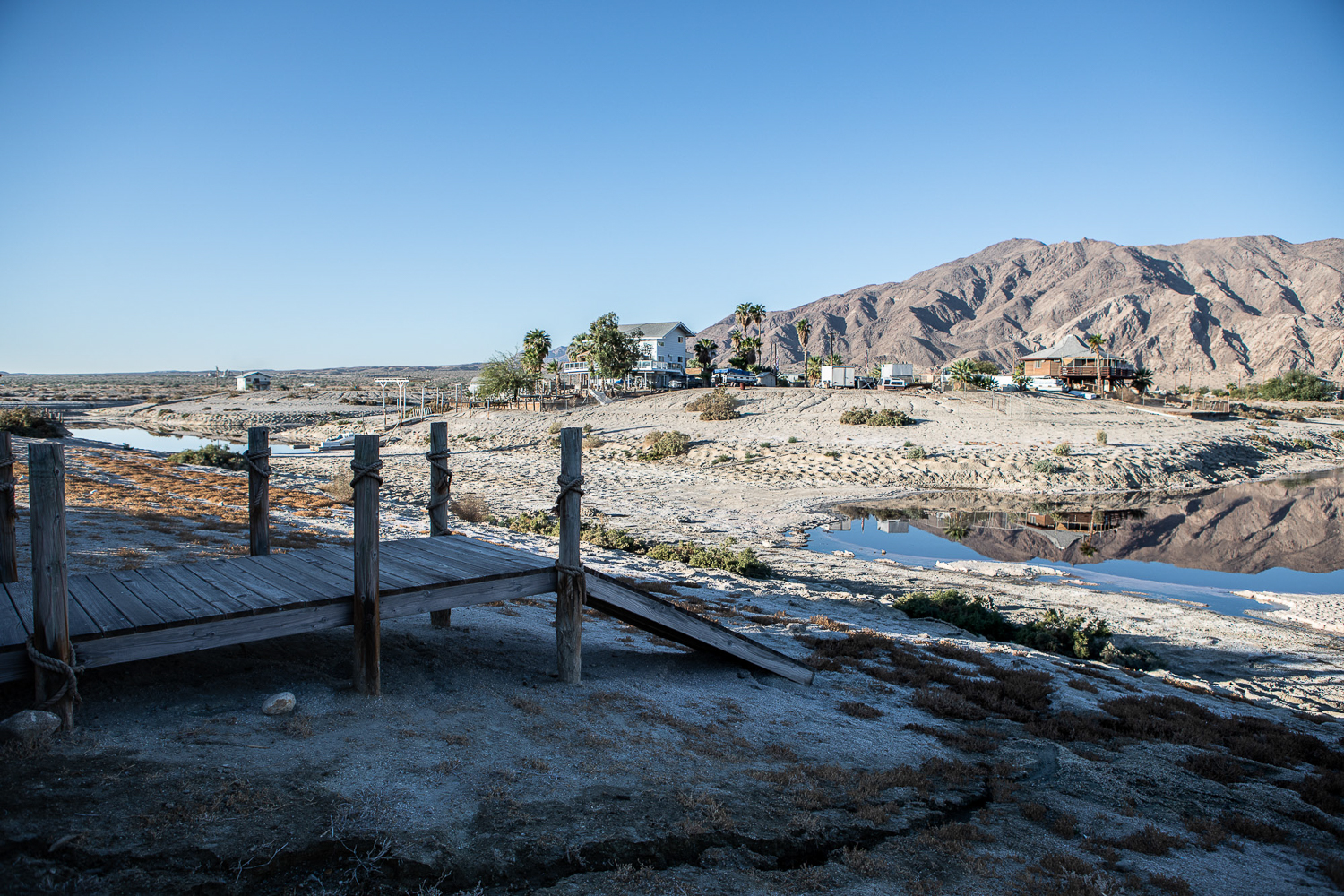 A dock sits where the water from the Salton Sea used to reach. Now the Desert Shores, California, area has a stagnant pool of water left at the bottom of the former canals. Mette Lampcov

For years, the government stood still.

Over tens of thousands of years, as it meandered across the West, the Colorado River occasionally filled the Salton Sea. The lake’s most recent iteration formed between 1905 and 1907, when an engineering disaster diverted the river into the basin. It has since been fed largely by agricultural runoff from the Imperial and Coachella valleys. It soon became clear that salinity levels would continue increasing. Since then, millions more people have begun relying on the Colorado River, even as climate change threatens the waterway. In response to competing demands, the 2003 agreement diverted water from the Imperial Valley. That meant that the lake’s level was guaranteed to drop. So, in 2007, the state released a sweeping proposal with an $8.9 billion price tag — unfortunately, just as the Great Recession took hold. “Folks got sticker-shocked and did not really pursue a full rehabilitation-restoration approach,” Garcia said.

Still, the agreement included 15 years of inflows to temporarily control salinity while the state decided on a plan. By late 2020, the California Natural Resources Agency had completed one dust-suppression project covering a mere 112 acres; the goal for the end of that year was 3,800 acres. “For a very long time, the enormity of the challenge at the sea was frankly overwhelming, and there was very little action at the state level until 2014 or 2015,” said Wade Crowfoot, secretary of the Natural Resources Agency, the lead department tasked with restoring the sea.

That one completed site, the Bruchard Road Dust Suppression Project, looks like someone tried to farm the surface of the moon. Tractors dug long, straight furrows through the white, sandy playa to catch the windblown dust. But more expensive wetland habitat restoration is needed; the lake has long been an important feeding ground along the Pacific Flyway, a migratory bird route on the Western Seaboard.

In order to “fix” the sea, government agencies, led by the state, will need to flood, plough or plant tens of thousands of acres to control dust, and rebuild habitat. They’re racing against the clock. An estimated 131 square miles of playa will be dry and exposed to the air by the time the lake reaches a degree of equilibrium — meaning the inflow from three small waterways and agricultural runoff will maintain a smaller lake — in 2047.

For a shallow body of water, the Salton Sea holds a large amount of sunk costs. Years of studies, salaries, and office supplies have been purchased, but few shovels have been put to work.

But Arturo Delgado, an assistant secretary with the Natural Resources Agency and the state’s Salton Sea czar, pointed out that a portion of the more than $355 million set aside for the lake — 99 percent of it from bonds — needed to be spent sorting out permits and access to a complex checkerboard of state, tribal, federal and private land. “The bulk of the funding that has been appropriated to date for the Salton Sea program has not been spent,” he said.

As of late November, state agencies had used about $53 million, most of it going to ledger entries, including “studies and planning activities,” “staffing and other design costs” and “annual surveys to monitor bird and fish populations.” Glaring zeros marked the “expended” column next to several construction budgets.

Years of indecisiveness mixed with land-access and permitting issues have bogged down the process; the state’s own efforts to clean up the ecological disaster got stuck in the compliance process. “Frankly, the permitting is probably more expensive right now than the actual projects,” said Tina Shields, water department manager at the Imperial Irrigation District, which, separate from the state, completed about 2,000 acres of dust suppression on its own land around the lake.

The state is appropriating some funds, but the federal government has been slow to pitch in. The U.S. Department of Agriculture kicked in about $8 million for dust-suppression projects, and over the past five years, the Bureau of Reclamation spent about $11 million on water-quality monitoring, wetlands projects along polluted rivers that empty into the lake, and studies on the feasibility of using salty water for dust mitigation.

When the Natural Resources Agency is finally ready for large-scale builds, the budget could get in the way. Individual construction sites are expensive, with one roughly 4,000-acre project set to break ground in 2021 costing an estimated $200 million. Another 160-acre design will cost $20 million. Cleanup along the New River, one of three small waterways flowing into the lake, comes with a $28 million bill.

And while California regularly calls on bonds to fund large projects, that money can’t be used for operations and maintenance. Crowfoot acknowledged that the state lacks a mechanism to fund long-term monitoring and upkeep. At the beginning of 2020, Gov. Gavin Newsom promised an additional $220 million, but that was predicated on a bond. When the pandemic hit, that idea and a parallel measure Garcia introduced in the Legislature both died, although Garcia said he’ll reintroduce his bill in 2021.

For now, the state lacks a better funding plan. “We don’t have the reserves that we had prior to COVID-19,” Garcia said. “That money has been invested in our emergency response.”

If the Salton Sea restoration were to reinvigorate the Pacific Flyway, it would likely begin at the wetlands around Red Hill Bay on the lake’s southeastern corner, where various agencies are constructing new habitat. An October visit found it far from inspiring. A flat patch of dirt covered several hundred dry acres, dotted with a few dead trees. A sign, complete with typos, showed a hopeful rendering of a functioning wetland and promised: “Estimated construction in 2016.”

Representative Raul Ruiz, a Demoract from California, introduced the federal Salton Sea Public Health and Environmental Protection Act in November to streamline permitting and unlock additional federal dollars. He acknowledged the delays, but called the Red Hill Bay Restoration Project “proof of concept that we can get a shovel-to-ground project started,” adding, “My No. 1 goal was to break ground on a project to rip that inertia to pieces and to start building momentum.”

The son of farmworkers, Ruiz grew up just miles from the lake. He returned home to practice medicine after studying at Harvard, and he still wears gym shoes with his suits, as if he’s about to run into the emergency room. Ruiz, who was struck by the high rates of respiratory illnesses in the area, compares the lake to a patient “in need of triage.”

A 2019 study conducted by researchers from the University of Southern California’s medical school and a local nonprofit called Comite Civico del Valle estimated that nearly one in four elementary school children in northern Imperial County, the area nearest to the Salton Sea’s exposed and emissive playa, suffered from asthma, about three times the national average. “Exposing this population to more and more poor air quality — in particular, particulate matter small enough to penetrate the lung-blood barrier that also carries toxins like arsenic, selenium, and pesticides — would be devastating to the public’s health,” Ruiz said.

Ruiz said that divergent visions had stalled progress, while egos got in the way. Since entering Congress in 2013, he has tried to rally local lawmakers and called on the federal government to take a more active role. Juarez, in Salton City, welcomes the efforts but believes that if this problem affected a wealthier, whiter area like Palm Springs, it would’ve been addressed already. It’s a sentiment her elected representatives share. So, she asked, “Why is nothing getting done?”

In 2020, the Imperial County Air Pollution Control District slapped the state and feds with notices of violation for failing to complete dust-control projects. The Imperial Irrigation District wants the state to act, too, citing the 2003 water transfer agreement. California politicians argue the federal government needs to step up because the Bureau of Reclamation owns much of the land underneath the lake. The feds insist they occupy a supporting role, and agency heads from Reclamation and the U.S. Fish and Wildlife Service refused to attend a September congressional hearing to discuss the government’s role in cleaning up the lake.

The people in Salton City and other towns around the retreating lake are still waiting. For Juarez, who began working in the fields when she was just 15, the clock is ticking on the American dream her family built in the California desert. It’s difficult to find hope in stepwise permit approvals while dust fights through cracks in her home. She takes her children to the doctor every six months and worries about Lihan. “I’m nervous, and I’m scared to see my son like that,” Juarez said.

She doesn’t want to move away but is finally considering it. “I don’t want to stay here and see my kids sick,” she said.